Grand champion Hakuho opened the Kyushu Grand Sumo Tournament with a convincing win on Sunday as he kicked off his campaign to claim a record-extending 43rd championship.

Hakuho dominated his match against komusubi Hokutofuji as the 15-day tournament at Fukuoka Kokusai Center got off to a favorable start for the 34-year-old yokozuna. Hakuho, who is returning from a finger injury, is also seeking his first championship since becoming a Japanese citizen in September.

While Hokutofuji won their previous faceoff two months ago and inflicted the injury that forced Hakuho out of the tournament, he managed little against the Mongolian-born grand champion. Hakuho began by attempting a belt hold, but quickly slapped down the 161-kilogram komusubi instead to secure the win in 2.4 seconds.

"It was a short bout, but there was a good flow to it," Hakuho said. "I'm glad. I want to keep riding this momentum." 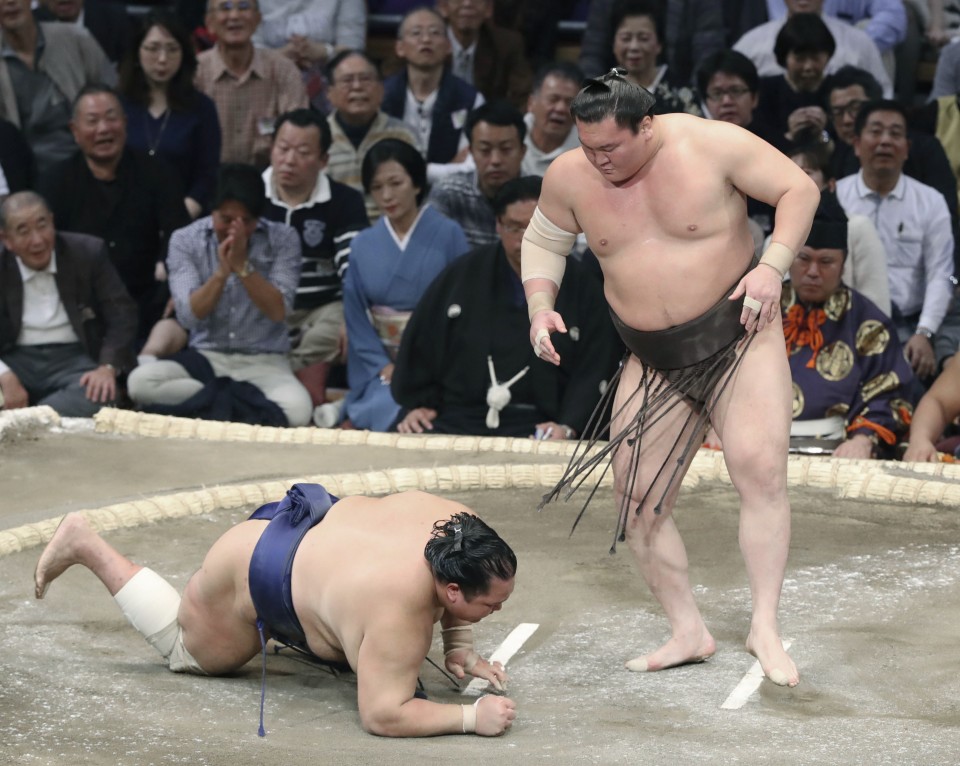 Hakuho is now the only wrestler in the sport's highest rank competing in Fukuoka, following the withdrawal of Mongolian Kakuryu due to a lower-back condition.

Sekiwake Mitakeumi's bid for promotion to ozeki got off to a smooth start with a win over No. 2 maegashira Myogiryu. Following the initial clash, Mitakeumi applied several shoves to Myogiryu's face before pulling him down.

Mitakeumi, who won September's tournament in a championship playoff after finishing tied with a 12-3 record, has a chance to become an ozeki depending on his performance here.

While there were questions before the tournament regarding the fitness of two ozeki, Takayasu and Takakeisho, each dominated his bout against a lower-ranked wrestler.

Takakeisho, recovering from an injury to his left pectoral muscle, forced out No. 1 Okinoumi in his return to the sport's second-highest rank following one tournament at sekiwake. 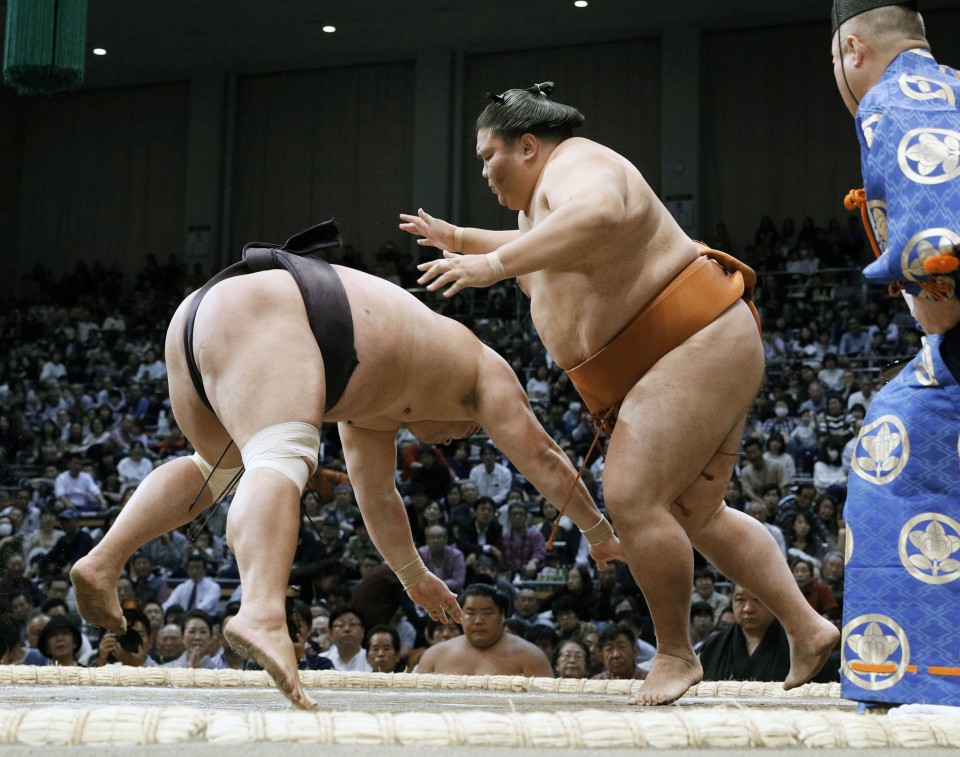 Okinoumi resisted Takakeisho's shoves to his face and chest, but allowed the young ozeki to execute a textbook frontal push out.

In the next bout, Takayasu thrust out No. 1 Daieisho for his first win since the July meet. Takayasu, who skipped the September meet, is competing as a demotion-threatened "kadoban" ozeki," needing at least eight wins to retain his rank at the January meet in Tokyo.

Ozeki Goeido, on the other hand, shoved komusubi Endo around the ring, but struggled with his footing. The ozeki crashed to defeat when one leg buckled beneath him.

Sekiwake Tochinoshin suffered a blow in his bid to return to ozeki following a loss to No. 2 Meisei. The Georgian appeared in good position after the initial clash, but was thrown down to the surface.

Tochinoshin was demoted to sekiwake for failing to post eight wins at two consecutive meets, and needs at least 10 wins in Fukuoka in order to earn promotion again as Takakeisho did in September. 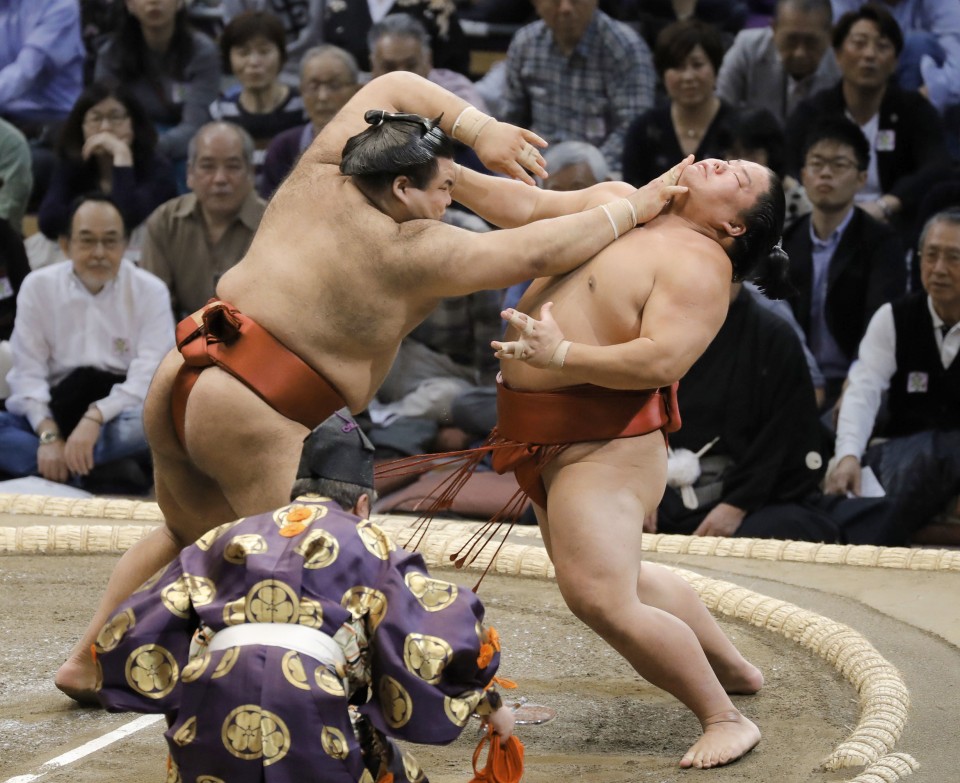 Earlier in the day, No. 16 Wakatakakage, the tournament's only makuuchi-division debutant, quickly pushed out No. 15 Daishomaru for his first win on the elite division.

"I was nervous but I was focused on going forward. It was how I imagined the bout to be," the 24-year-old Wakatakakage said. "I want to compete well, making use of my speed."