A territory-wide obstruction protest has caused traffic chaos and school suspensions in Hong Kong for the third consecutive day Wednesday.

Protesters set up makeshift roadblocks and scattered debris on major thoroughfares in various districts in the early hours, seriously affecting rush-hour road traffic and forcing the cancellation of bus services.

Two major subway lines were closed and other services were partly suspended in the morning. A carriage sustaining extensive damage was stopped at the University Station, which leads to Chinese University of Hong Kong where a serious clash between police and protesters happened late Tuesday.

Protesters clashed with police for hours on a road entrance to the university. They threw bricks and Molotov cocktails at police, who fired tear gas and rubber bullets in return. As many as 1,000 tear gas canisters were fired and some 60 protesters were injured, local media reported.

Police said a marine vessel was deployed to send dozens of mainland Chinese students of the university who have asked for help away from the campus due to their personal safety concerns. 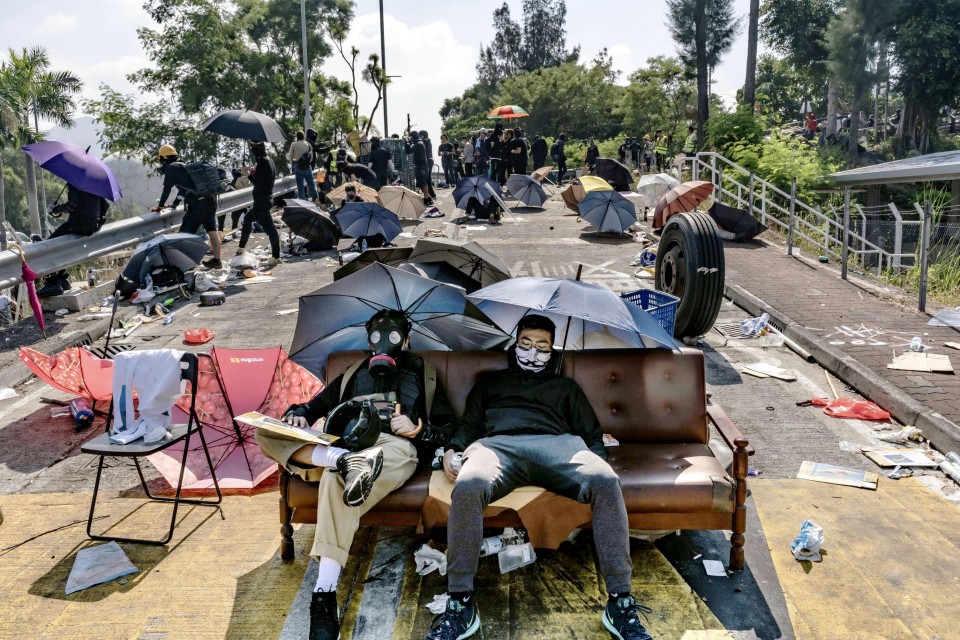 (Pro-democracy protesters rest on a couch on the No.2 bridge at Chinese University of Hong Kong on Nov. 13, 2019, in Hong Kong, China.)
[Getty/Kyodo]

The Taiwan government's Mainland Affairs Council said its office in Hong Kong is arranging flights to evacuate Taiwanese students studying there and wishing to return home.

In the downtown business district of Central, protesters staged a lunchtime demonstration Wednesday, blocking off traffic on the major roads there. Some of the crowd rallied at the building where the Hong Kong Stock Exchange is located. Police arrived and detained at least three people, including a man bleeding from the head.

Police left after reopening the roads, but they were blocked by protesters again. They returned to disperse the crowd in the evening and arrested at least two protesters while most others left the scene.

Although government leader Carrie Lam said Tuesday schools would not be suspended so as not to give in to the protesters, the Education Bureau said Wednesday that parents should decide on their own whether to send their children to school. It later announced that all school classes will be suspended Thursday.

More than 10 universities have also suspended classes, including the Chinese University of Hong Kong, the University of Science and Technology and Baptist University, which have announced either cutting short the current semester or offering the remaining classes online due to "campus safety concerns." 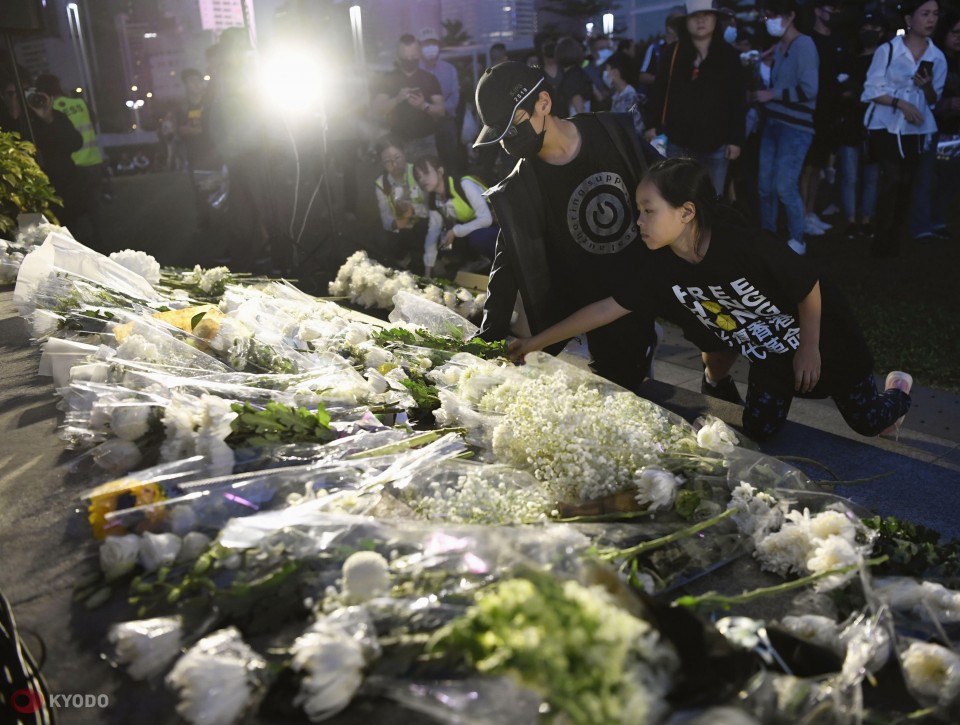 (People lay flowers in Hong Kong on Nov. 9, 2019, after a male university student fell at a multistory car park during anti-government protests, resulting in what is believed to be the first protest-related death.)

By nightfall, some protesters were throwing debris down from a footbridge onto a road leading from the cross harbor tunnel trying to block traffic on one of the major harbor-crossing routes that is usually crammed with vehicles during rush-hour traffic.

Protesters blocking off Nathan Road on the Kowloon Peninsula were chased away by police firing tear gas.

Wednesday night's horseracing was also suspended due to safety concerns.

"We have witnessed violent damage to rail carriages, a petrol bomb attack on a moving rail car, arson and road blockages at some 30 areas (Tuesday)," Chief Secretary for Administration Matthew Cheung told reporters. "The government is highly concerned about the current situation and we urge the citizens to stay away from, reject and cut ties with violence."

"Whatever your beliefs are, whatever you are pursuing, resorting to illegal acts like violence, destruction or random attacks on people is not the way and is doomed to fail. The government stresses again that we are dedicated, confident and capable of stopping violence and we fully support the police force in strictly enforcing the law," he said.