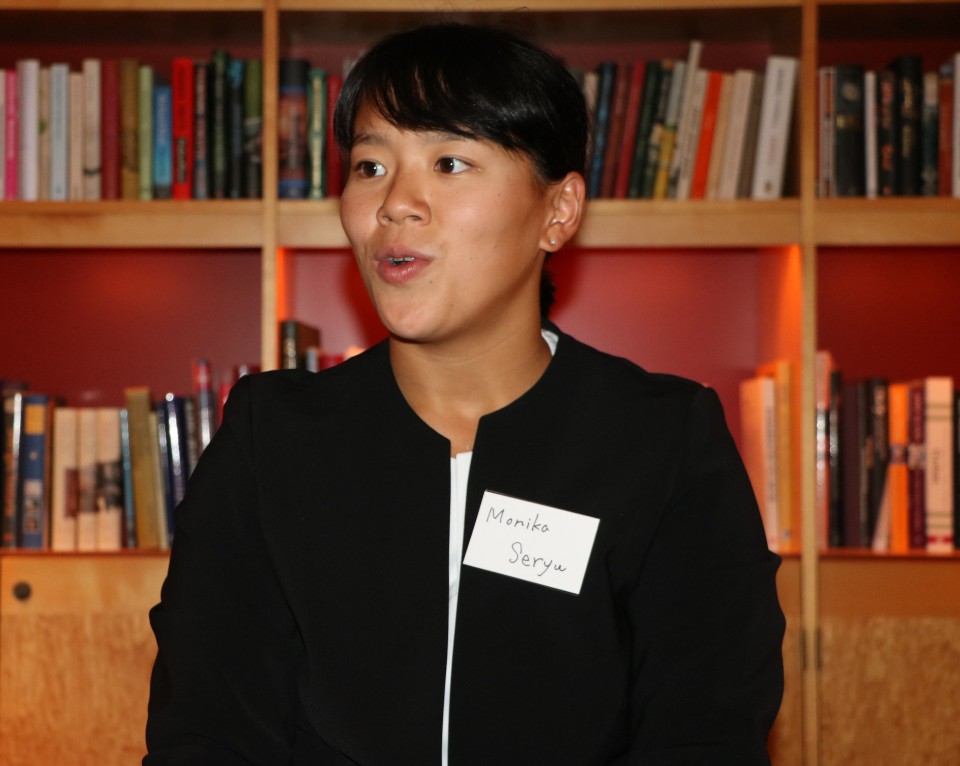 TOKYO - Japanese paracanoeist Monika Seryu is determined to excel at the Tokyo Paralympics next year, as she believes a strong performance will not only give hope to people with disabilities, but also help change perceptions and make Japanese society better for all.

Seryu, aiming for a medal at the Tokyo Games, believes the legacy of the Paralympics, driven in large part by those who share their inspirational and memorable experiences, will break down longstanding social barriers in the 2020 host country.

"I personally think those impressions grow rather stronger throughout time," she said, based on her own "life-changing experience" at the 2016 Rio Paralympics with the world's top disabled athletes, who seemed more confident and happy with their lives while competing on the world stage.

"If people's minds are changed, society will change as well," Seryu told Kyodo News in a recent interview in Tokyo after giving a presentation at the Swedish Embassy during an event related to the 2020 Tokyo Games.

Seryu, a 21-year-old student at the University of Tsukuba, learned in her adaptive sports class that an important mission of Paralympians is to convey experiences had overseas to people with disabilities in Japan.

Since then, she has been trying to show people with disabilities, including those not active in sports, what they can achieve in their lives by sharing her activities on social media, including skydiving, mountain climbing, bicycling and cross-country skiing.

"I hope they can live their lives with more confidence," Seryu said.

Born in Tokyo on Nov. 17, 1997, Seryu was an active girl who engaged in various sports including swimming and canoeing, and became a member of the canoe club at her junior high school. But during a physical education class in her freshman year of high school, she had a tragic accident and was left paraplegic.

The tragedy, however, did not stop her from pursuing her passion of canoeing, and after about a year of intense rehabilitation and training, she made a competitive comeback and took part in the paracanoe world championships.

"I had to start over by practicing falling into the water and escaping from a capsized canoe without drowning at the swimming pool of an elementary school," Seryu said, recalling her rehabilitation days.

Then, with just two years' experience of competitive paracanoeing, Seryu made her Paralympic debut in Rio de Janeiro in 2016.

After finishing eighth at the Rio Games, Seryu had an opportunity to train with alpine skier Akira Kano, a three-time Paralympic gold medalist, in Hokkaido, and realized she had been unconsciously putting a limit on her abilities.

"Until the Rio Games, I was thinking I could do only this much because I can't use my abdominal and back muscles," she said.

Pointing to the evolution of Paralympic sports amid its increased competitiveness, Seryu said para athletes cannot win on the world stage any longer by simply maximizing the functions they have been left with.

"Now, we have to train by imagining as if our lost functions were still there," she said, explaining that training paralyzed parts of the body improves coordination between functioning and nonfunctioning areas of the body.

After the introduction of the new training method, Seryu finished fifth at this year's paracanoe world championships in August and earned the recommendation for a spot in the 2020 Games.

Through traveling abroad and competing at overseas events, Seryu has noticed some differences in the concept of "barrier-free" accessibility in Japan and other advanced countries. While many overseas facilities allow persons with disabilities autonomy, she realized many facilities in Japan are accessible by wheelchair users only with assistance.

"Abroad, you ride and get off a bus by yourself, while in Japan, it is difficult for us to do many things without any assistance," she said, adding that many Japanese facilities may have been designed that way "because we have so many elderly people."

In line with Seryu, Swedish Ambassador to Japan Pereric Hogberg said the disparity between Japan and Sweden over such an issue appeared to be derived from a difference in social values.

"Maybe it's because Sweden is quite an individualistic society. It's not about (being) collective," Hogberg said.

In his country, according to Hogberg, there is more emphasis on what each individual wants to do in their life and what rights or possibilities they have, with each individual's effort being equally emphasized.

"You should still have the same possibility to be your own master of your life" regardless of having disabilities or not, Hogberg said.

"I fully understand and respect it's a beautiful thing to help, but sometimes we all know if you try to help a person too much, it does not help that person," he said, adding that both countries are heading in the right direction despite having different methods.

While Seryu thinks the accessibility of buildings and transportation systems is far more advanced in Japan when compared with other countries, she worries that the Japanese mindset toward disabilities may not be on par with the country's infrastructure.

Seryu said she feels many people in Japan are still trying to figure out the right distance to put between themselves and people with disabilities, wondering whether they should offer help or not in a variety of situations.

"I hope the Paralympics and Olympics will become an opportunity for Japanese people to get the courage to initiate conversations, then we can tell them 'thank you' or 'thanks, but we can do it by ourselves.'"

Looking to the future, Seryu hopes for further improvement in accessibility, just not at the expense of people caring for and helping each other out.

"I think we still need communication to support each other in our society," she said.