People in Japan mourned the victims of Typhoon Hagibis on Tuesday, a month after the powerful typhoon left at least 91 people dead and flooded tens of thousands of homes.

The typhoon made landfall on Japan's main island Honshu on Oct. 12, bringing record-breaking rainfall in wide areas and causing embankments to collapse. The deaths occurred in 13 of Japan's 47 prefectures, and four people remain missing, according to a Kyodo News tally.

At noon, residents of Marumori, Miyagi Prefecture, as well as Saku, Nagano Prefecture, offered silent prayers. The town of Marumori lost 10 residents due to the typhoon and another remains unaccounted for, while two people died in Saku. 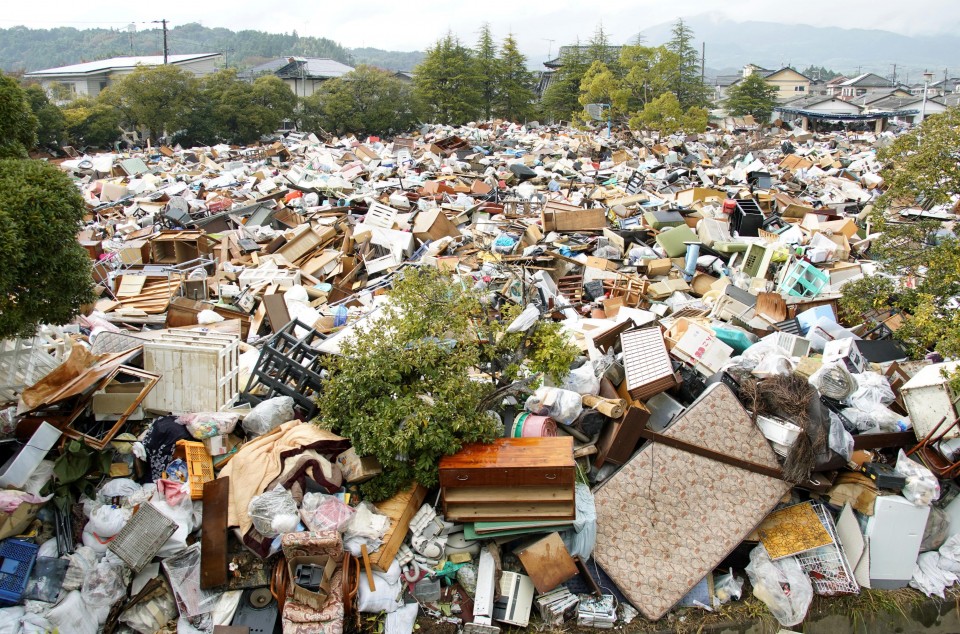 (Waste piled up at a park in Iwaki, Fukushima Prefecture, northeastern Japan, one month after Typhoon Hagibis swept through the area.)

"At first, I thought I can't handle this, but I managed to survive a month with the help of my relatives and friends," said a 67-year-old woman whose home was destroyed, adding, "I can only do what I can do, one step at a time."

"I am exhausted as I have been cleaning up every day and returning to the evacuation center at night," said Tadao Hoshi, 66, a carpenter, who was removing the floors of his flooded home. 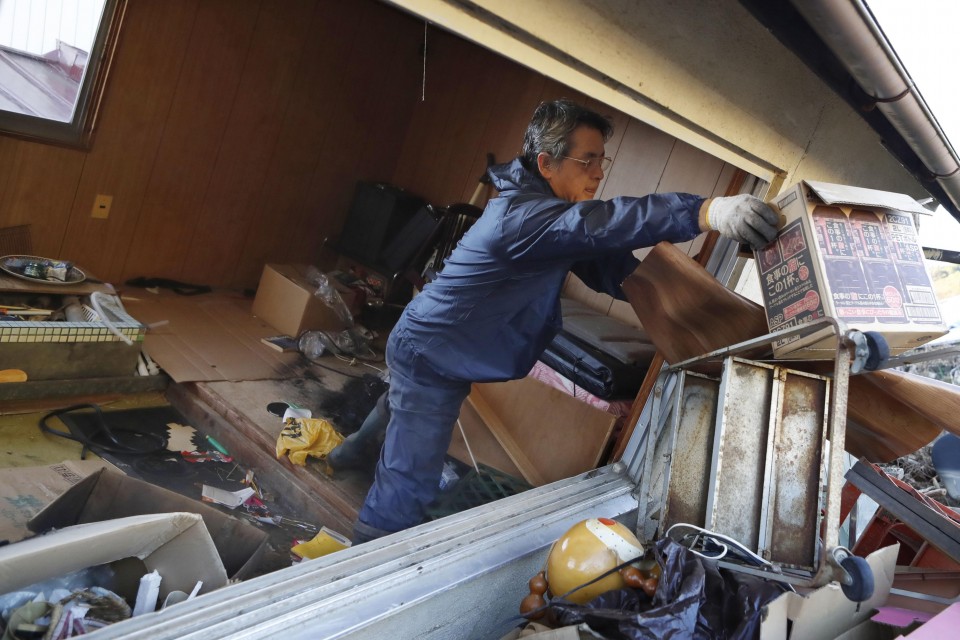 A total of 3,185 Marumori residents are estimated to be living in damaged homes, accounting for around 20 percent of the town's population.

Many people came to the town office from the morning to ask about moving into temporary housing and what help they can receive for farming damage. Mayor Kunio Hoshina said the town will start construction of temporary housing on Wednesday.

Roughly 2,700 people remain evacuated from their homes in the country, including those affected by heavy rain that followed the typhoon, sharply down from the peak of about 237,000 as of Oct. 13, according to the Fire and Disaster Management Agency. 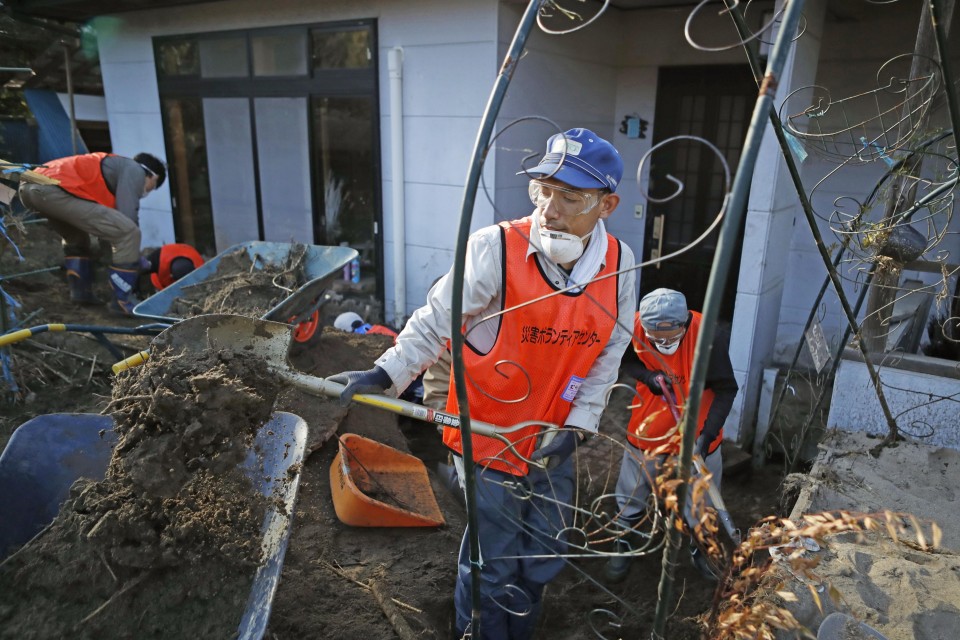 (Volunteer workers remove mud from a house in Marumori, Miyagi prefecture, on Nov. 12, 2019.)

The Ministry of Health, Labor and Welfare said Tuesday that 26 nursing homes and group homes for elderly people with dementia in seven prefectures remain damaged after flooding.

Some elderly residents have been forced to move multiple times during evacuation, which has had an adverse impact on their health.

The typhoon caused embankments to collapse in 140 locations along 71 rivers, and the damage caused by the flooding of the Chikuma River in Nagano Prefecture and the Abukuma River in Fukushima and Miyagi prefectures was massive. 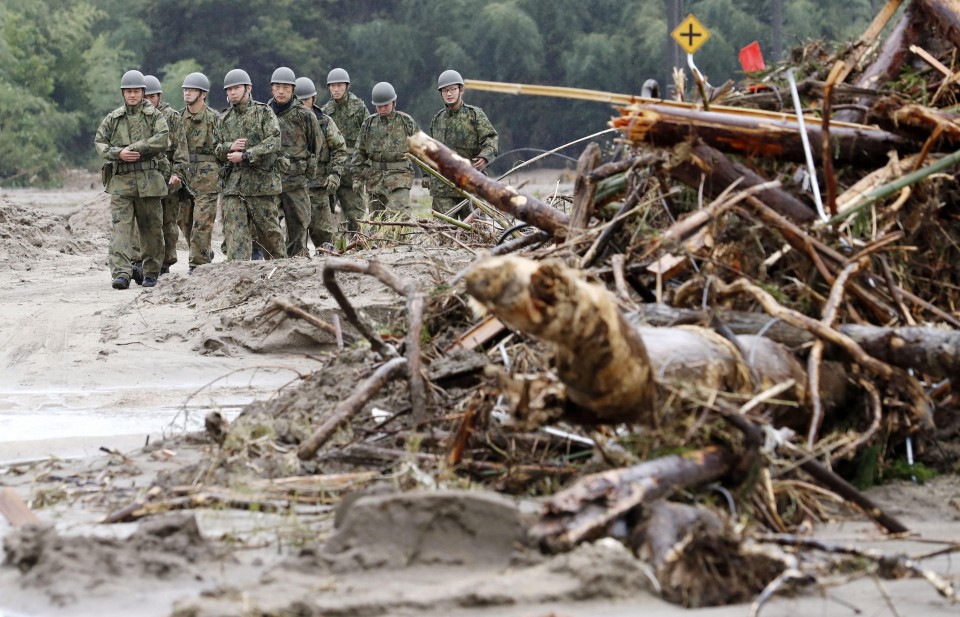 (Self-Defense Forces members inspect the extent of damage in Marumori, Miyagi Prefecture, northeastern Japan, on Oct. 19, 2019, after the area was inundated by Typhoon Hagibis.)

A total of 87,896 houses were hit by the typhoon, with 11,685 severely destroyed, 11,906 damaged and the remaining 64,305 suffering less severe floodwater damage under government criteria.

Land, Infrastructure, Transport and Tourism Minister Kazuyoshi Akaba said his ministry and the Japan Meteorological Agency will review how to release information on rivers as a regional land bureau failed to issue flood information and the ministry's website on water levels became temporarily inaccessible due to a surge in visitors at the time.