Pope Francis called for the elimination of nuclear weapons during high-profile visits Sunday to Nagasaki and Hiroshima, the only cities in the world to have suffered atomic bombings, saying the use of such weapons is a "crime" against humanity and nature.

In an address at the Atomic Bomb Hypocenter Park in Nagasaki, the pope urged political leaders to ponder the "catastrophic impact" of nuclear weapons deployment, while stressing a world without nuclear weapons is "possible and necessary."

"A world of peace, free from nuclear weapons, is the aspiration of millions of men and women everywhere," the pope said, as he described the southwestern Japan city as having "witnessed the catastrophic humanitarian and environmental consequences" of a nuclear attack when it was hit by a U.S. atomic bomb on Aug. 9, 1945 -- three days after Hiroshima suffered a similar attack with greater damage.

"To make this ideal a reality calls for involvement on the part of all: individuals, religious communities and civil society, countries that possess nuclear weapons and those that do not, the military and private sectors, and international organizations," he said. 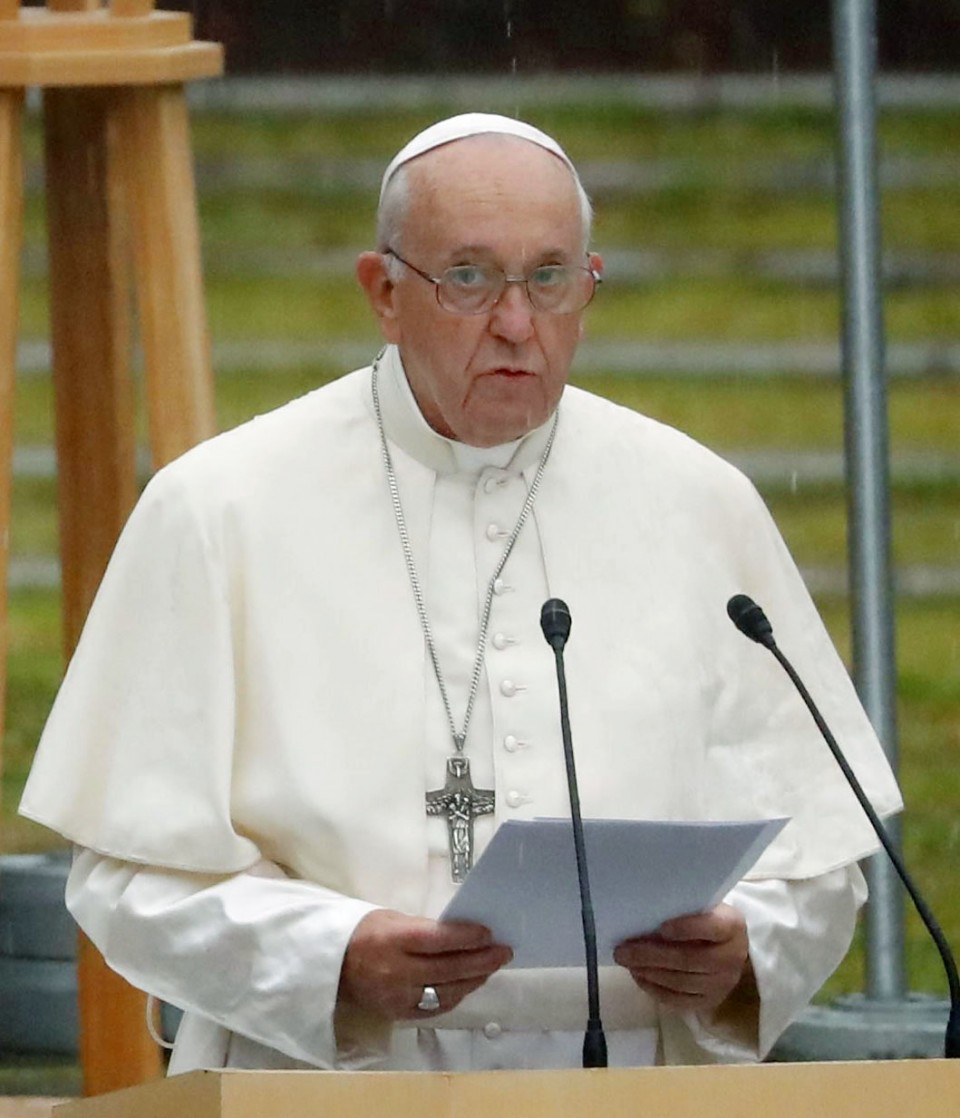 Later Sunday, the 82-year-old Argentine, speaking in Spanish, told a gathering in Hiroshima that the use of atomic energy for war is "today, more than ever, a crime," and "immoral."

Calling his visit to the Peace Memorial Park in the western Japan city a duty as a "pilgrim of peace," he stressed that a true peace can only be an "unarmed peace."

The speeches, which lasted for about 13 minutes each, came as Washington and Moscow have been at odds over arms control since the expiration in August of the Intermediate-Range Nuclear Forces Treaty, a 1987 pact reached by the United States and the Soviet Union.

The pope warned that a "climate of distrust" risks leading to a dismantling of the international arms control framework, saying the Catholic Church "must never grow weary of working" to support the legal instruments of nuclear disarmament and nonproliferation, including the Treaty on the Prohibition of Nuclear Weapons.

The Holy See was quick to sign the treaty, which was passed at the United Nations in July 2017 with the support of 122 nations, but it has yet to take effect since it has not been ratified by the required 50 states.

Almost all the world's nuclear weapons states as well as Japan and other countries under the U.S. nuclear umbrella have opposed the treaty. 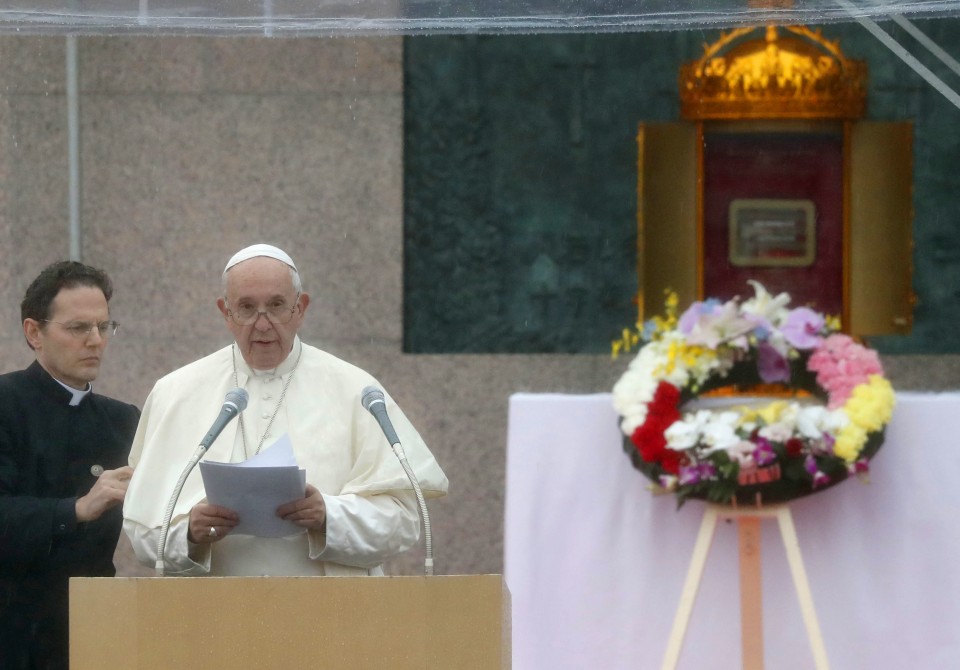 Speaking in Nagasaki, the pope asked political leaders "not to forget" that nuclear weapons "cannot protect us from current threats to national and international security."

"We need to ponder the catastrophic impact of their deployment, especially from a humanitarian and environmental standpoint, and reject heightening a climate of fear, mistrust and hostility fomented by nuclear doctrines," he added.

The possession of nuclear and other weapons of mass destruction is "not the answer" to the human desire for security, peace and stability, he said.

The pope also urged the world to "speak out against the arms race," adding it "wastes precious resources" that should be used for human development and environmental preservation.

"In a world where millions of children and families live in inhumane conditions, the money that is squandered and the fortunes made through the manufacture, upgrading, maintenance and sale of ever more destructive weapons, are an affront crying out to heaven," the pope said.

The pope read out the message after offering flowers in front of the hypocenter cenotaph at the park in Nagasaki in rainy weather.

Shigemi Fukabori, an 88-year-old Catholic and survivor of the atomic bombing of Nagasaki, said after handing flowers to the pope, "Just meeting with him filled my heart with joy."

Fukabori, who lost four siblings in the U.S. attack, added, "I prayed anew for world peace and a world without war."

The pope also paid tribute to the Martyr Saints on the Martyrs' Monument and held a mass at a 25,000-seat baseball stadium.

The pope arrived in Japan on Saturday for a four-day trip, the first papal visit to Japan in 38 years. He was elected as the Roman Catholic pontiff in 2013.

John Paul II, who in February 1981 made the first papal trip to Japan, pushed for the elimination of nuclear weapons during a visit to Hiroshima and Nagasaki amid heightened tensions between the United States and the Soviet Union over the deployment of intermediate-range nuclear missiles.

Gist of pope's address in Nagasaki

-- Possession of nuclear, other weapons of mass destruction "not answer" to desire for peace.

-- There is need to break distrust that risks leading to dismantling of international arms control framework.

Gist of pope's address in Hiroshima

-- I felt duty to come to Hiroshima as "pilgrim of peace."

-- It is difficult to speak of peace if we build "terrifying new weapons of war."

-- It is hard to propose peace if we use threat of nuclear weapons to resolve conflicts.

-- True peace can only be unarmed peace. 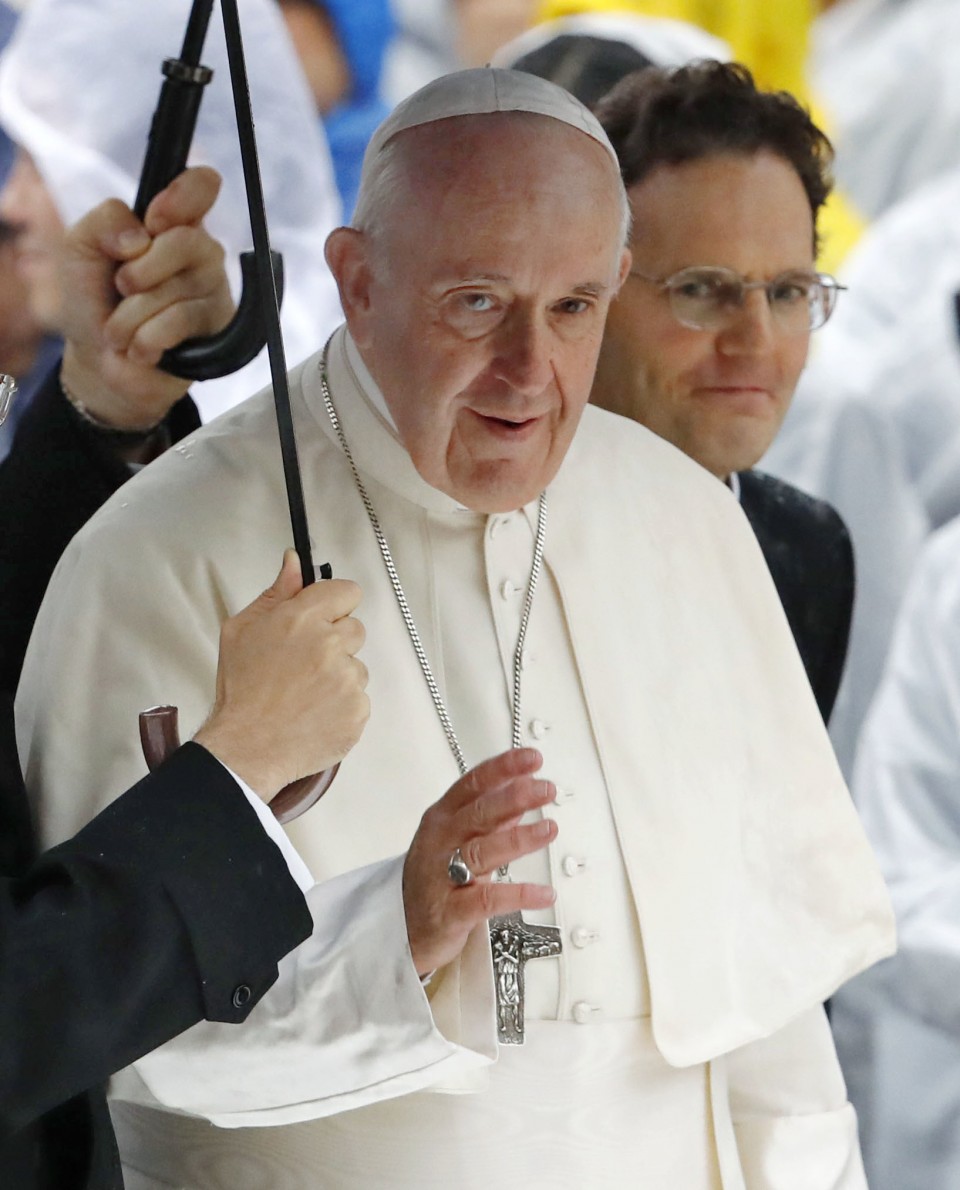 November -- The pope makes a remark that mankind "has learned nothing" from the history of Hiroshima and Nagasaki.

November -- The pope criticizes the possession of nuclear weapons for the first time when meeting with atomic-bomb survivors in Vatican City. Hiroshima Mayor Kazumi Matsui asks the pope to visit Hiroshima and Nagasaki.

January 2018 -- The pope issues cards that show a 1945 picture of a boy carrying his dead brother on his shoulders following atomic bombing of Nagasaki.

May -- Nagasaki Mayor Tomihisa Taue asks the pope to visit Nagasaki and Hiroshima.

Dec. 17 -- The pope expresses his desire to visit Hiroshima and Nagasaki around the end of 2019 when meeting with Maeda.

Sept. 13 -- The Vatican officially announces the papal visit to Japan.

Nov. 25 -- The pope to meet separately in Tokyo with Emperor Naruhito, Prime Minister Shinzo Abe, as well as victims of the 2011 earthquake, tsunami and nuclear disasters that devastated northeastern Japan.