Police believe a fire that destroyed Shuri Castle, a symbol of Okinawa located at a World Heritage site, was not likely to have been caused by arson, investigators said Friday.

In analyzing the evidence, including security camera footage at the gutted castle, police have found no traces of intrusion into the castle ahead of the fire breaking out, they said.

Okinawa Churashima Foundation, which manages the castle, told a press conference on Friday that there was nothing unusual an hour before the fire alarm sounded.

A security guard conducted a routine patrol inside the Seiden main building of the castle about an hour before the fire and found nothing amiss at that time, the foundation said. 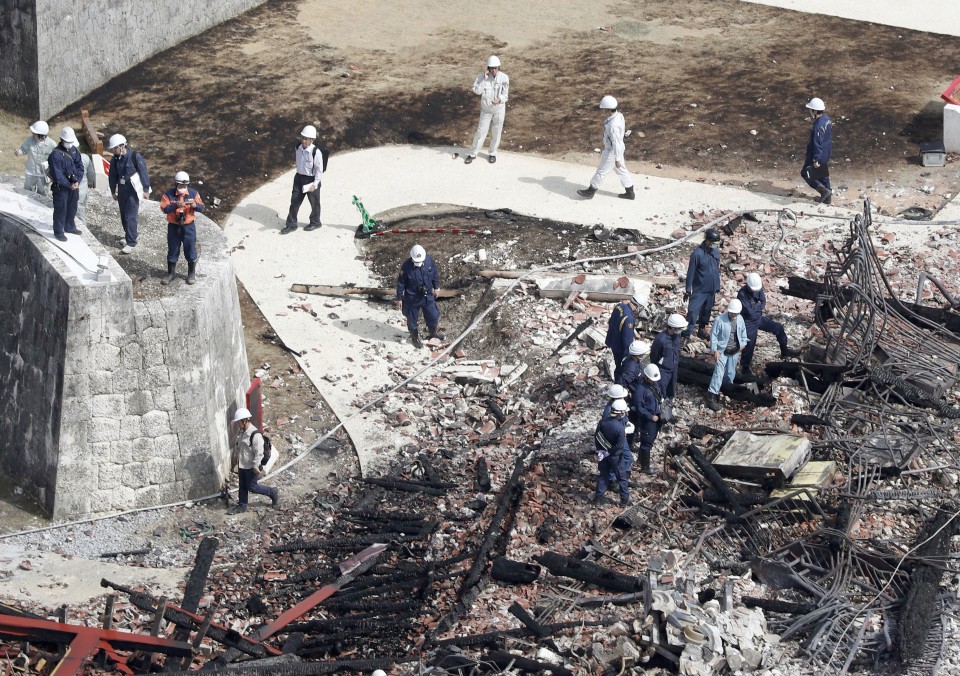 The blaze that started at around 2:30 a.m. Thursday engulfed seven wooden buildings, occupying a total of more than 4,000 square meters on a hill overlooking the prefectural capital Naha, before it was extinguished around 1:30 p.m. There were no reports of injuries.

As around 100 local officials entered the site in the morning, smoke was still rising from the burned-down Seiden main hall, where the authorities suspect the fire started.

Thursday's fire engulfed the restored buildings of the Seiden hall, the Hokuden north hall and Nanden south hall, at a time when a festival recreating scenes from ancient rituals was about to enter its fifth day at the castle, having started on Sunday.

The city's fire department said the castle's heat detectors notified them of the fire at 2:34 a.m. Thursday.

Aside from the heat detectors and seven security cameras, no other electrical machinery was active that night, a foundation official said.

Around 70 staff members related to the festival had been on the premises, with workers installing lights and other equipment nearby, but they were all gone by just after 1 a.m., prior to one of the security guards making his rounds.

Some of the event's props were left in the main hall, according to the local officials.

While the buildings were equipped with fire alarms and extinguishers, they did not have sprinklers, which are only mandatory at facilities that accommodate overnight guests.

Of about 1,500 artifacts kept in the castle buildings, over 400 may have been lost, according to the foundation.

"The people of Okinawa are discouraged," Okinawa Gov. Denny Tamaki told reporters as he visited Tokyo to request the central government's help in rebuilding the castle, part of a national park that opened in 1992.

Tamaki said he told Chief Cabinet Secretary Yoshihide Suga that a restoration plan for Shuri Castle will be in place by 2022, the 50th anniversary of Okinawa's return to Japan after its postwar occupation by the United States.

Prime Minister Shinzo Abe told Liberal Democratic Party lawmakers in charge of promoting disaster resilience, "We, as the government, promise to work on rebuilding it."

Suga told a press conference, "The government will do whatever is necessary for rebuilding, including providing financial support." 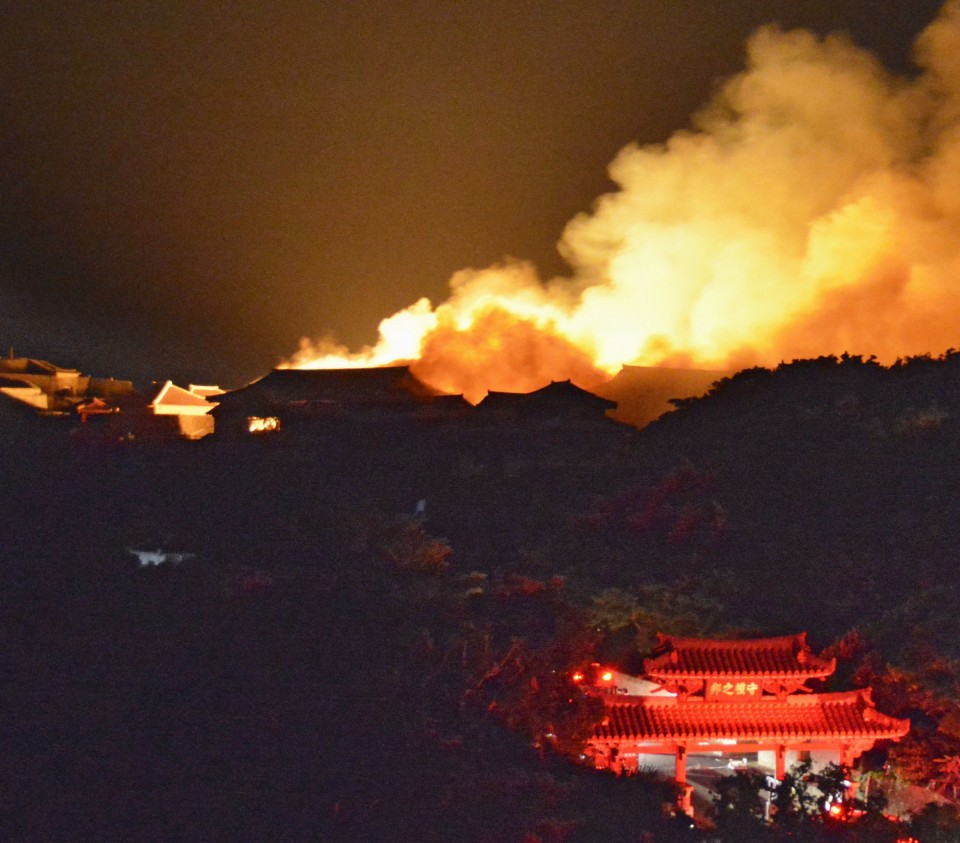 The original Shuri Castle dated back to the Ryukyu Kingdom, which spanned 450 years until Okinawa was annexed by Japan in 1879. It welcomed envoys from Chinese emperors as well as Commodore Matthew Perry and the U.S. warships he commanded in 1853.

The castle was destroyed in fierce World War II ground battles with U.S. forces in 1945 and had been rebuilt under a government project. The castle ruins, excluding restored buildings, were registered as a part of Japan's 11th UNESCO World Heritage site in 2000.

Following a fire that engulfed Notre-Dame cathedral in Paris in April, the Japanese government called for the strengthening of fire prevention measures to protect cultural properties across the country.

The government has earmarked around 8 billion yen ($74 million) in the fiscal 2020 budget for such efforts, quadrupling the amount from the current fiscal year.

But restored buildings such as Shuri Castle are not designated as national treasures or important cultural properties, leaving them ineligible for government subsidies and requiring their owners to take responsibility for fire prevention measures.

The castle was a major tourist spot in the southern island prefecture, attracting about 2.8 million people in the fiscal year through last March. The site is on the route of next year's Tokyo Olympic torch relay.