Sam Rainsy, the exiled leader of Cambodia's banned opposition party who is wanted by authorities in his home country, arrived in Malaysia on Saturday afternoon after a flight from Europe.

Though he had pledged to return to his native country and join the Cambodian people on Saturday's national independence day, the opposition leader told reporters at Kuala Lumpur International Airport that he will be in Malaysia for "a couple of days." 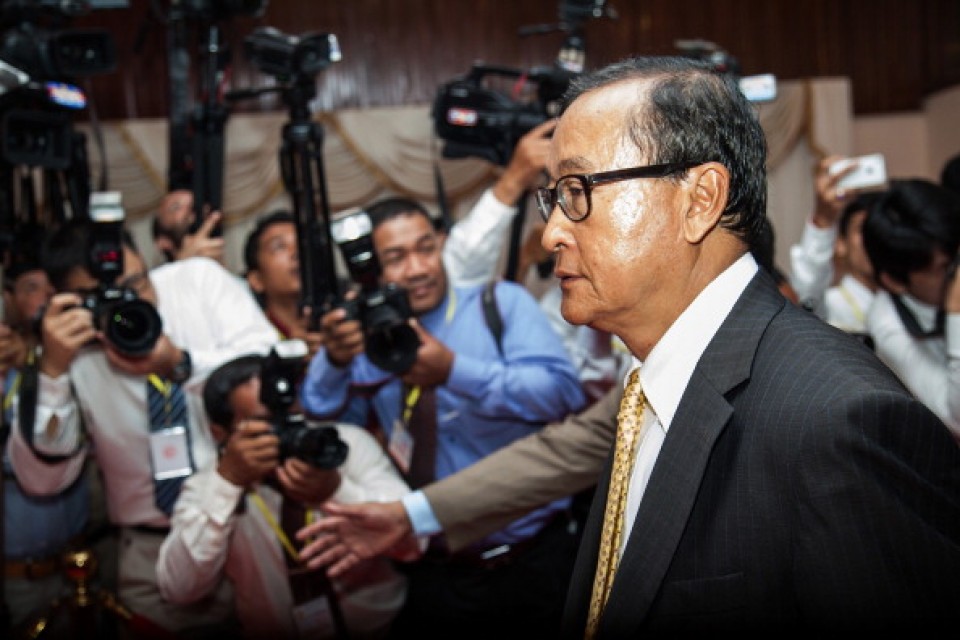 The co-founder and acting president of the Cambodia National Rescue Party had been prevented from boarding a Thai Airways flight from Paris to Bangkok on Thursday on the Thai prime minister's order.

"I want to go back to my home country," he also said, calling his return home "my right and also my duty." But he declined to say how he plans to do so.

Sam Rainsy boarded an Amsterdam-Kuala Lumpur flight on Friday night, according to a source.

Earlier, the prominent opposition figure said on his Facebook page, "Sam Rainsy boards a plane in Paris today for another destination" with an accompanying photo showing him standing on an airport boarding bridge with carry-on luggage.

Sam Rainsy, 70, has been in self-exile abroad since 2015 and faces more than 10 cases of lawsuits filed against him by members of the Cambodian People's Party of Prime Minister Hun Sen.

On Wednesday, Thai Prime Minister Prayut Chan-o-cha said he had ordered that Sam Rainsy not be allowed to enter Thailand, from where he planned to cross over by land into Cambodia on Saturday along with other party members who have been living in self-exile abroad.

Cambodian authorities have vowed to arrest them if they return to the country.

"Malaysia deserves kudos from around the world for letting Sam Rainsy enter the country and meet with his colleagues," Phil Robertson, deputy Asia director of Human Rights Watch, said. "More countries in ASEAN need to emulate Malaysia going forward if the bloc is ever going to shake the moniker of being primarily a dictator's club."

In September, he appealed to the Cambodian military to support the people in overthrowing Hun Sen, saying, "Toppling the illegal Hun Sen regime is a legal and legitimate act because Hun Sen is a usurper who has stolen power from the people through a fake election in 2018."

A Cambodian court subsequently charged Sam Rainsy and eight other party figures with plotting a coup.

Among them is CNRP Vice President Mu Sochua, who was detained in Malaysia after arriving there on Wednesday night but has since been released and allowed to stay in the country until Tuesday.

Prior to the Supreme Court-ordered dissolution of the CNRP in November 2017, it was the sole opposition party in the National Assembly, with 55 seats compared with 68 held by Hun Sen's Cambodian People's Party.

Its removal ahead of the July 2018 election enabled the ruling party to win all 125 seats and Hun Sen to extend his 33-year rule for another five years.

A total of 118 of the opposition party's lawmakers and other senior members were also banned from politics for five years.