Pope Francis began a four-day trip to Japan on Saturday where he will call for the elimination of nuclear weapons in messages he will deliver in Nagasaki and Hiroshima.

With the pope's special plane arriving at Tokyo's Haneda airport around 5:30 p.m., it marked the first papal visit to Japan -- the only country to have suffered atomic bombings -- in 38 years. 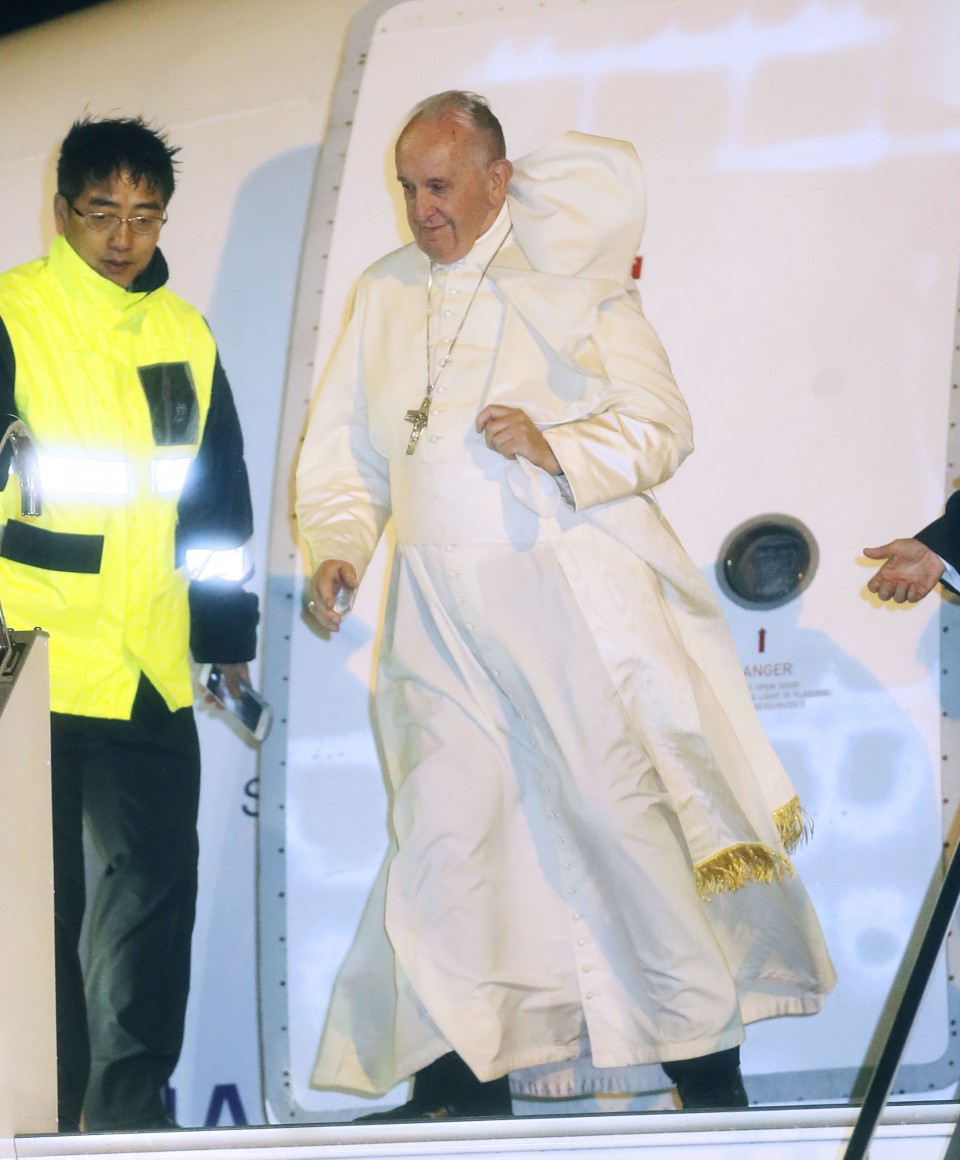 In an evening meeting with bishops at the Vatican's embassy in the capital, the pope said, "I pray for atomic-bomb survivors who are still suffering from the wounds of tragedy left in human history."

The pope also referred to victims of the March 2011 earthquake, tsunami and nuclear disasters that devastated northeastern Japan, as well as those of recent calamities including Typhoon Hagibis that hit central, eastern and northeastern Japan in October.

"It is our duty to help people who suffer," he said.

On Sunday morning, the pope will travel to Nagasaki and deliver a "message on nuclear weapons" at the Atomic Bomb Hypocenter Park. Then he is to hold a mass at a baseball stadium in the southwestern Japan city.

The 82-year-old Argentine will move to Hiroshima in the evening and hold a "meeting for peace" at the Peace Memorial Park near Ground Zero, where the western Japan city's anniversary ceremony for the atomic attack takes place every August.

He has repeatedly appealed for the abolition of nuclear weapons since he was elected as Roman Catholic pontiff in 2013. 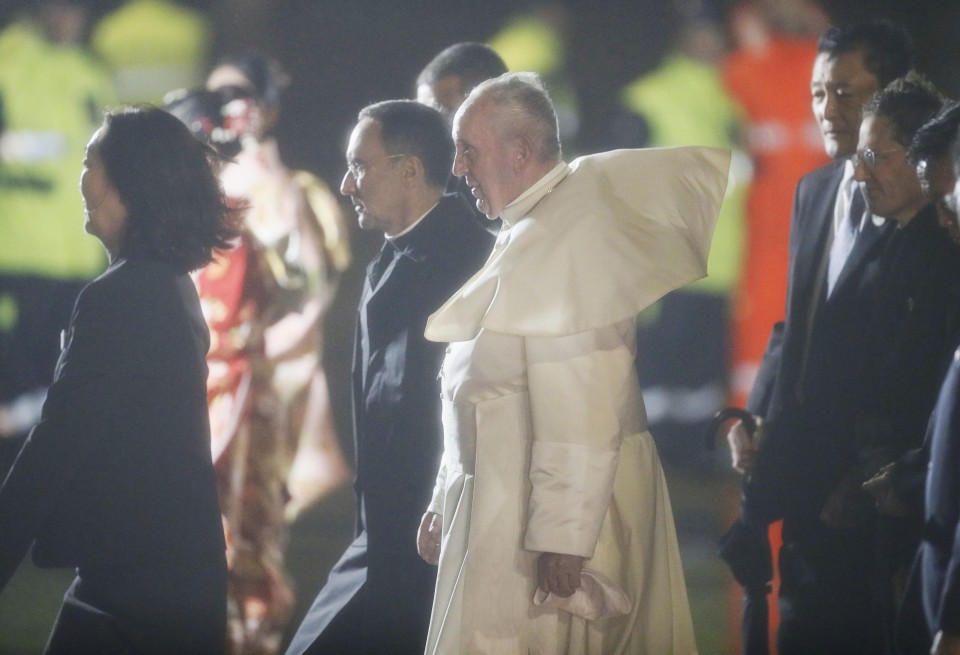 After delivering messages on nuclear weapons in the two cities, the pope is due to return to the capital, meeting on Monday with survivors of the 2011 earthquake, tsunami and nuclear meltdown.

Later the same day, the pope will also meet Emperor Naruhito, who ascended the Chrysanthemum Throne on May 1, and Prime Minister Shinzo Abe.

Just before meeting Abe, the pope will hold a large-scale mass at Tokyo Dome, to which he has invited Iwao Hakamada, an 83-year-old man who was sentenced to death for a quadruple murder but granted a retrial and release in 2014 under a district court ruling following 48 years of imprisonment.

The Vatican has said the pope has no plan to meet with Hakamada, but attention is focused on whether a meeting will take place and if the pope will issue some form of message to Japan on its death penalty system.

Pope John Paul II, the last pope to visit Japan, also went to Hiroshima and Nagasaki in February 1981 as the first pontiff to travel to the country and called for the elimination of nuclear arms.

Pope Francis is the first Jesuit to become pope. Saint Francis Xavier, a Jesuit missionary, introduced Christianity to Japan in 1549.

Prior to Japan, the pope visited Thailand and met with King Maha Vajiralongkorn and the supreme Buddhist patriarch during his stay from Wednesday through Saturday. 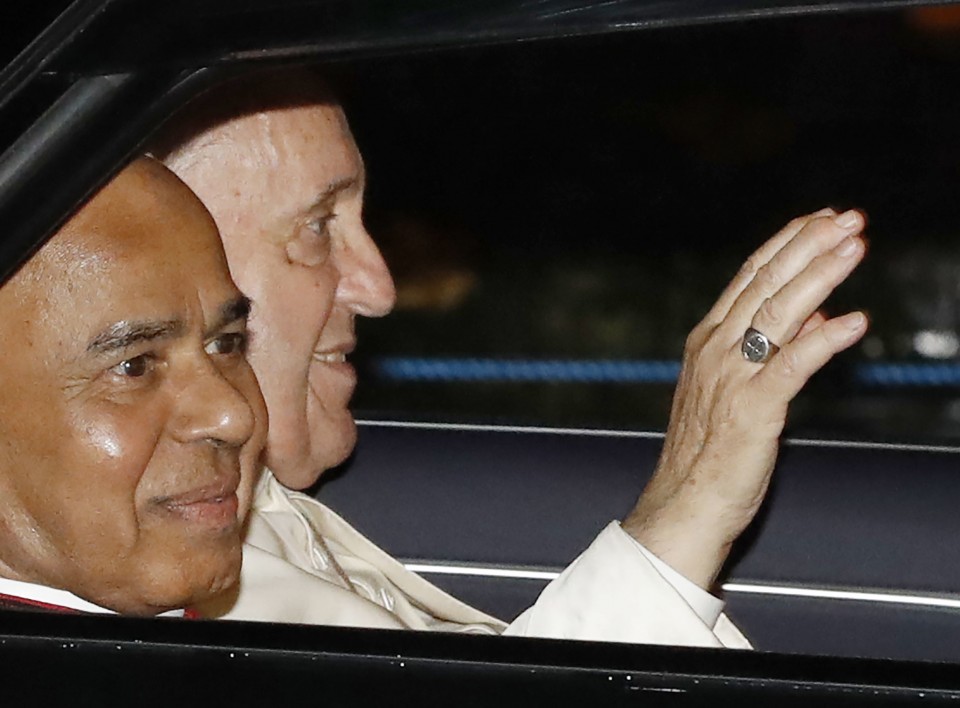