Japanese Defense Minister Taro Kono and U.S. Defense Secretary Mark Esper agreed on Monday that the military cooperation between Japan and South Korea is vital for regional security, including their intelligence-sharing pact, which is set to expire this weekend, according to a Defense Ministry official.

They held a bilateral meeting in Bangkok a day after Kono and his South Korean counterpart Jeong Kyeong Doo met, but failed to bridge the gap over how to maintain the General Security of Military Information Agreement, also known as GSOMIA, which Seoul has been refusing to renew despite the looming deadline Saturday. 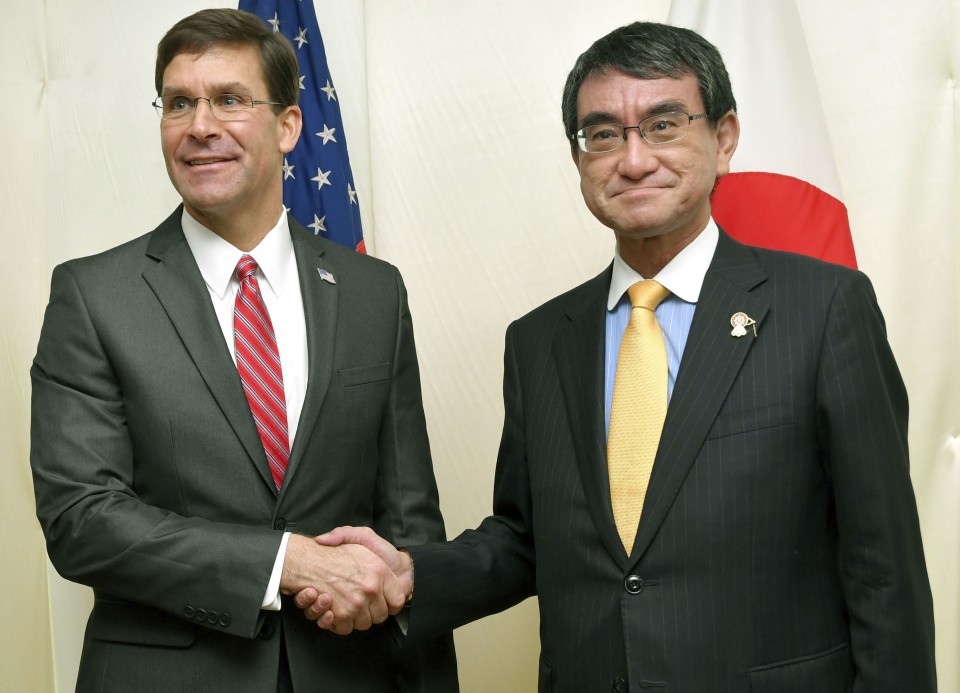 The official said Kono and Esper also discussed safely issues regarding operations of U.S. forces stationed in Japan following recent incidents, such as parachute drop training at the U.S. Kadena Air Base in Okinawa, in violation of a bilateral agreement banning such drills in areas other than a designated remote island.

"We discussed a wide range of issues," Esper told reporters after the meeting, while Kono said, "We settled some issues."

The meeting took place on the sidelines of the annual ASEAN Defense Ministers' Meeting-Plus in the Thai capital.

Japan and the United States have repeatedly asked South Korea to renew the GSOMIA as part of their trilateral security cooperation to counter the North Korean nuclear and missile threat.

But Seoul insists it will only reconsider its August decision to scrap the agreement if Tokyo first reverses its move earlier this year to tighten controls on exports of some materials needed by South Korean manufacturers of semiconductors and display panels.

Tensions between the Asian neighbors have escalated since October last year when South Korea's top court ordered a Japanese company to pay compensation for forced labor during Japan's 1910-1945 colonial rule of the Korean Peninsula.