For about 30 minutes on Sunday, Namibia looked very much New Zealand's equal, the African nation that has yet to win at the Rugby World Cup giving as good as they got until the inevitable talent gap allowed the Kiwis to run away with a 71-9 win.

Namibia led the game early at Tokyo Stadium (Ajinomoto Stadium) for approximately three minutes and were a try-saving tackle away from going in front again in the 13th minute.

The Welwitschias cut the deficit to just four with a 25th minute penalty and then to one with another kick four minutes later, despite having already given up two tries.

From that point on, however, New Zealand's class emerged and the All Blacks finished out the first half with two more tries, one to and the other to Ben Smith, to take the lead to 15 despite losing Nepo Laulala to a yellow card for a high tackle. 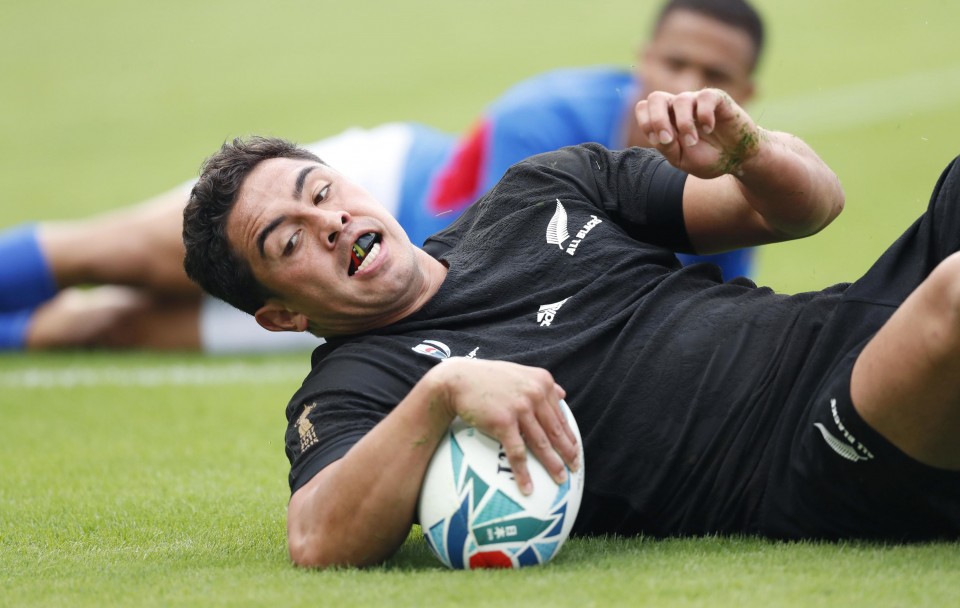 "We didn't turn up with the right attitude and allowed Namibia to partake a lot more than they should have," reflected All Blacks coach Steve Hansen.

"When the opposition -- which happens every time we play somebody -- are right up for the game, it can look ugly and messy, and that is what happened in the first half."

"We were a little bit off the pace. Our breakdown work was poor, there was no urgency to get the job done," the outgoing coach said.

Incredibly, the team thought of as South Africa's smaller cousin were only one point worse off than the Springboks were at halftime of their game against New Zealand earlier in the tournament, a great achievement for a team that has now played 22 times at the World Cup without getting a win.

Rugby: All Blacks eye return to top of pool against Namibia

Namibia's Welsh coach Phil Davies said he is proud of the effort his team put in and pointed to some big positives from their performance.

"The ball retention and some of the line breaks (were great). We knew before we are playing against the best team in the competition, the current champions and we went out there and gave it everything we could," he said.

"I could not have asked more from the players, so we are very proud of them in that respect. The scoreboard looks a bit painful but...we have a lot of things to take from the match."

New Zealand crossed seven more times in the second half to run up the 62-point final deficit, playing the final seven minutes again down a man when Ofa Tuungafasi was binned for another high shot.

Prop Joe Moody crossed from close range, Anton Lienert-Brown, Sevu Reece and Smith got their second five-pointers out wide, captain Samuel Whitelock bullied his way over under the posts, Jordie Barrett got one and TJ Perenara the last.

(Samuel Whitelock shrugs off a tackle)

"It was a spectacular one," Hansen said of Perenara's effort. "It even got me out of my seat, and not too many things can do that."

The 11-try bonus-point win for New Zealand puts them back atop Pool B with 14 points, four ahead of South Africa and Italy, and all but books their place in the quarterfinals with only a game to play against Italy, a team they have never lost to.

New Zealand experimented with Barrett at flyhalf, the first time he played at the position in an international, and saw some success.

The 22-year-old marshaled the team well and laid on the team's first try with a well-weighted cross-field kick that was gobbled up by Reece. He kicked well, too, successful with eight of 11 conversions.

He was also responsible for perhaps the most spectacular moment of the match, making a midfield break with ball in hand before moving it wide and getting it back to assist Lienert-Brown's second try.

Hansen said he is not sure how many more times Barrett will play in the All Blacks No. 10, but that he acquitted himself well.

"Certainly it is not his No. 1 position, so to be able to come out the way he did he should be very excited, fulfilled and proud."

The loss means Namibia's very slim hopes of reaching the quarterfinals are officially gone as they needed a bonus-point win to stay alive.

It is the sixth consecutive World Cup that Namibia have failed to reach the knockout phase, but they have one last chance against Canada in Kamaishi next Sunday to leave Japan with a win.

It may not have resulted in competition points, but the first 30 minutes against the All Blacks was a win of sorts, Davies said.

"We kept fighting and battling and that is the most important thing, and that is why I am proud of the boys," he said.