Huawei Technologies Co. has been attempting to eradicate the image that the Chinese tech giant has been engaged in spying activities in conspiracy with the country's government led by the Communist Party.

But fears about espionage by Huawei are likely to linger, as many nations including the United States and Japan have maintained the view that Chinese companies and authorities have close links under socialism, foreign affairs experts say.

Especially, there is deep anxiety that Beijing has been looking to harness state-of-the-art 5G networking technology to enhance its military prowess, which has been making China-wary countries more reluctant to do business with Huawei, they added.

"Whether Huawei can dispel global security concerns would hinge on how much it can improve transparency of its products and whether it can convince other nations that it has kept a subtle distance with the government," a source close to the tech industry said. 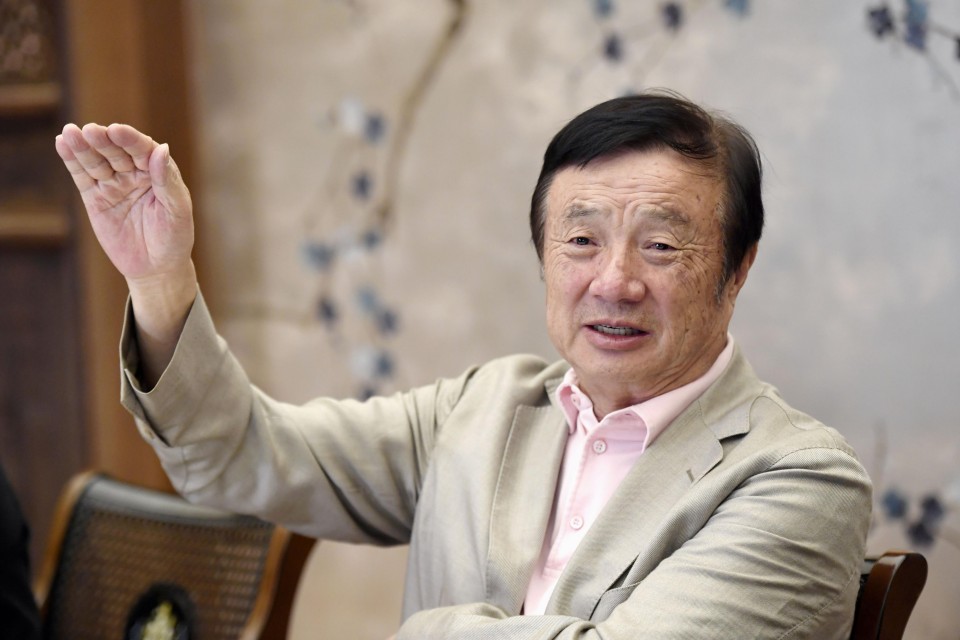 (Ren Zhengfei, chief executive and founder of Huawei Technologies Co., at an interview with Kyodo News in Shenzhen on Oct. 16, 2019.)

Huawei has recently been considering selling its 5G technology to firms in the United States and Europe, while expressing eagerness to provide them with its "source code" -- the fundamental component of a computer program that makes software work.

Next-generation 5G technology will enable transmission of large amounts of data at extremely high speeds, allowing telecommunication devices to connect to almost all products and services through the wireless network.

Huawei has played a crucial role in the "Made in China 2025" blueprint, under which Chinese President Xi Jinping has been trying to create global leaders in robotics, artificial intelligence and other advanced technologies at the state's initiative.

Xi has also pledged to step up efforts to give China's military forces "world-class" status by the mid-21st century.

Huawei was founded in 1987 by Ren Zhengfei, a former engineer in the Chinese military, and it has become a leader of the field of 5G mobile communication, with the United States and China competing for clout in the internet and cyberspace areas.

In an interview with Kyodo News on Wednesday, Huawei chief executive Ren said, "We want to be a cordial merchant. We will never do what would disadvantage and betray our consumers."

Officials of the company have argued that no evidence has been found to confirm that the Chinese government has stolen confidential information from abroad through products of Huawei.

The industrial source said, "Huawei has claimed that it has done nothing wrong. It has criticized the United States for making efforts to label Huawei as a minion of the Chinese Communist Party."

In 2017, however, the Chinese government established a "national information law" that forces any organization and citizen to cooperate with intelligence activities of the country.

Even if there are no problems with Huawei products, the possibility cannot be ruled out that employees of the firm will be individually involved in espionage activities by the Chinese government, pundits say.

Trump, who has pursued protectionist policies as part of an "America First" agenda, has also voiced wariness over China's rise in cutting-edge technologies, with Washington having targeted Chinese goods related to them in an ongoing tariff trade dispute.

In the wake of Trump's accusations, some mobile phone carriers in U.S.-allied nations like Japan have become willing to exclude Huawei from their 5G network.

"We will see a different world after 5G technology spreads. Every fundamental social issue regarding security, including nuclear power grid and automated driving systems, will be linked to 5G," a senior Japanese government official said.

"If China takes control of 5G, it could stop such systems only by hitting buttons. As long as the Chinese government is believed to use 5G for military purposes, the United States and its allies would not want China to have influence in the field," the official said.

A Huawei employee said, "It is an eternal challenge that Chinese firms are suspected of having a relationship with the government."

In his first-ever one-on-one interview with Japanese media, held in Shenzhen, southern China, where the firm's headquarters is located, Ren said he is keen to bolster business cooperation with Japanese companies.

The Japanese government official, who is well-versed in the situation in China, added, "Mr. Ren must think in his heart that the Chinese government should not disturb business of Chinese companies."