Media organizations from approximately 70 countries watched a live broadcast of the ceremony in a press center located at the Shinagawa Prince Hotel in Tokyo. Some focused on the traditional and historical aspects of the event, while others questioned aspects of the ritual regarding separation of state and religion.

"It was quiet, peaceful, but powerful," said Thomas Hahn, a Tokyo-based correspondent from German newspaper Suddeutsche Zeitung. "It was spiritual, but not in an exaggerated way."

The emperor declared his enthronement in the "Sokuirei Seiden no gi" ceremony -- an ancient ceremony equivalent to a coronation -- from a 6.5-meter-high canopied throne, known as the Takamikura, within the Imperial Palace. 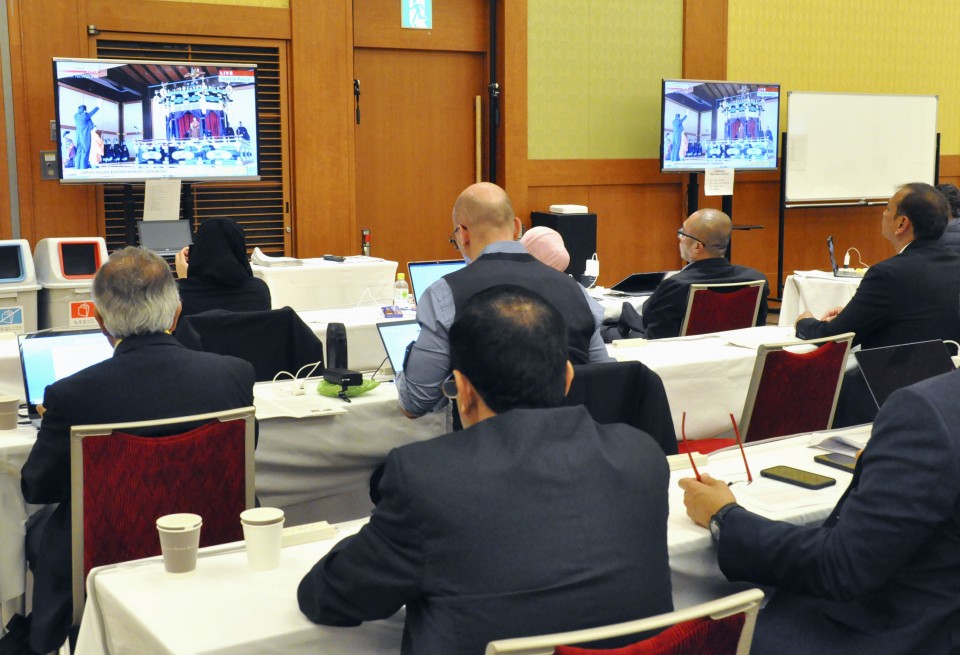 "It's great to have 1,000 years of history, a long tradition," said Juraj Petruska, a counselor of the Slovakian Embassy, who was also in the press center.

During the ceremony, Prime Minister Shinzo Abe conveyed felicitations at the Seiden State Hall of the palace, leading the guests in three banzai cheers wishing longevity for the emperor.

However, there has been criticism that the form the ritual takes contravenes the postwar constitutional separation of state and religion as well as the sovereignty of the people, since the emperor declares his enthronement from an elevated position above the prime minister standing below.

Song Kankan, chief of the Tokyo bureau of the Shanghai Media Group, expressed a feeling of strangeness about the act. "The three banzais from the prime minister were puzzling from the point of view of separation of state and religion," she said.

"It makes sense from a ceremonial perspective," Song said. "But I didn't feel it was necessary."

"It's hard to describe," Hahn, 47, said, following the broadcast of the ceremony. He mentioned criticism that the ceremony lacks a clear division between state and religion, while also expressing scrutiny of how the emperor "has no rights at all."

"It's great to have an emperor but it's also strange," Hahn said. "He's an ambiguous figure."

The emperor succeeded to the Chrysanthemum Throne on May 1, the day after his 85-year-old father, former Emperor Akihito, became the first Japanese monarch to abdicate in about 200 years.