Japanese and South Korean prime ministers made little progress Thursday in de-escalating a feud over wartime history that has led to a tit-for-tat trade spat but managed to agree on the need to continue dialogue.

The 20-minute meeting between Shinzo Abe and his counterpart Lee Nak Yon in Tokyo was the highest-level discourse in more than a year between the two Asian neighbors who have seen ties sink to their worst level in years.

Lee, who attended Emperor Naruhito's enthronement ceremony on Tuesday, handed Abe a letter from South Korean President Moon Jae In, which said Japan is an "important partner in cooperating for peace in Northeast Asia," according to a South Korean government official.

Abe also acknowledged that as neighbors Japan and South Korea are important to each other. "At present, bilateral ties are in an extremely severe state, but I believe we should not leave them as they are," the Japanese Foreign Ministry quoted him as telling Lee.

The Japanese leader expressed his intention to continue diplomatic efforts to break the impasse, while Lee said he shares an understanding of the importance of dialogue between the two nations, according to the ministry.

Bilateral ties soured after South Korea's top court last year ordered Japanese firms to pay compensation for forced labor during Japan's colonial rule of the Korean Peninsula from 1910 through the end of World War II in 1945.

Tokyo has long maintained that the issue was settled by a 1965 agreement under which it provided Seoul with $500 million for "economic cooperation."

Abe told Lee that South Korea should "keep its promises" under the accord to allow the neighbors to return to a "healthy relationship," according to the Japanese ministry.

Lee, meanwhile, said that his country has honored the agreement and would continue to do so, according to the South Korean official.

The court decisions have outraged Japan, leading it to remove Seoul from a list of trusted trade partners and impose stricter export controls on some key materials needed by South Korea's tech industry. 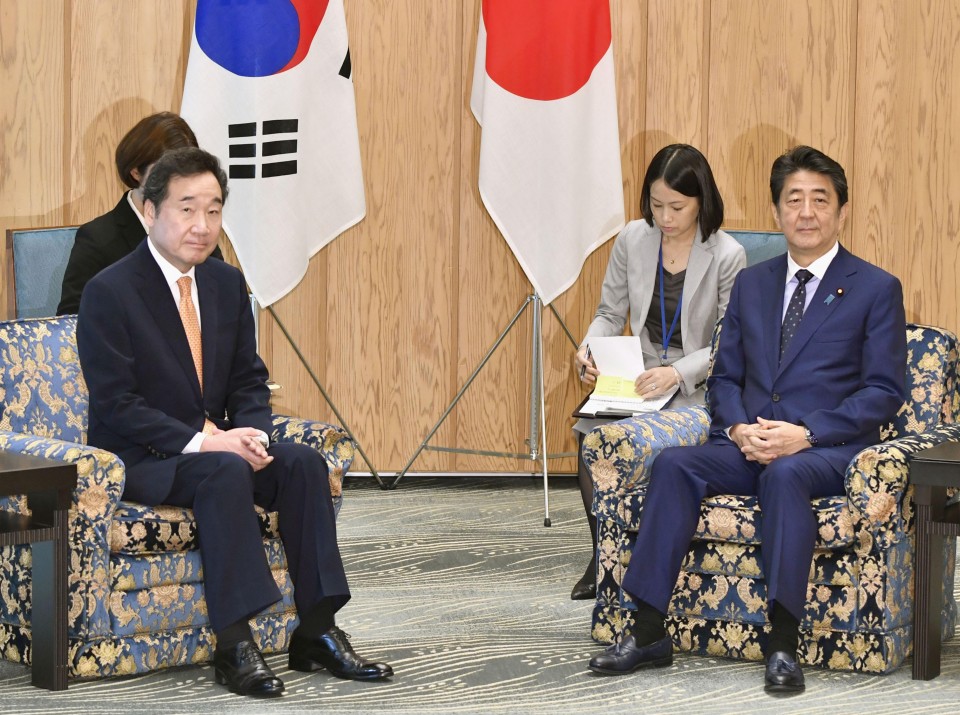 South Korea retaliated by scratching Japan from its own "white list" of trade partners.

Abe stressed to Lee the importance of trilateral cooperation with their mutual ally, the United States, in addressing issues concerning North Korea, the Japanese ministry said.

Seoul has said it will terminate a military intelligence-sharing pact with Tokyo that helps them counter North Korean missile threats. The General Security of Military Information Agreement, or GSOMIA, is set to expire in November.

The visit to Tokyo by Lee, who lived in Japan for several years as a news correspondent and speaks Japanese, had been viewed as an opportunity for detente.

The focus now is on when a meeting between Abe and Moon can be realized. The two last held one-on-one talks in September last year on the sidelines of the U.N. General Assembly in New York.

Upcoming chances include a summit involving the Association of Southeast Asian Nations in Bangkok and the Asia-Pacific Economic Cooperation forum in Santiago, Chile, both next month, as well as a trilateral summit with China in December.

Japanese officials, however, have said they are reluctant to arrange an Abe-Moon meeting without a change in South Korea's stance.

Lee later held a meeting with Japanese business leaders, including Hiroaki Nakanishi, chairman of the Japan Business Federation, or Keidanren.

The economies of Japan and South Korea are "interlocked like gears, and we must ensure that they keep spinning," Lee said in opening remarks.

"It was a very positive meeting focusing on opening up the path to a new future," Nakanishi told reporters.