When it comes to Japan's tapioca craze, it seems the third time may be the charm. Currently in the midst of a boom that has already outstripped the previous two waves, demand for tapioca drinks, also known as bubble tea or pearl tea, is still going strong.

A starch extracted from the cassava root, tapioca first won fans in Japan in the 1990s as a key ingredient in a coconut milk dessert. It then popped up again when milk tea using tapioca balls shaped like large, black pearls boomed in the 2000s. 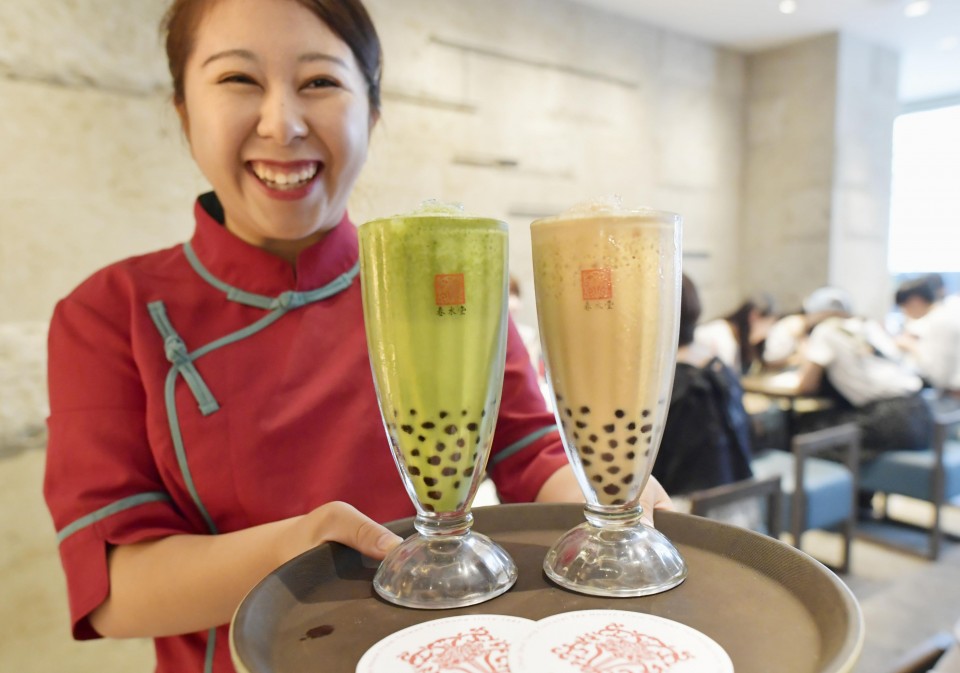 The drink fad made its return in 2015 and shows few signs of slowing down this time around, with a growing number of tea shops competing to offer their own unique takes on the customizable beverage.

The current boom has even spurred the creation of new vocabulary such as the verb "tapiru," which means to drink a tapioca beverage, and "tapikatsu," which loosely equates to "tapioca hunting," echoing similar phrases for "job hunting" and "marriage-partner hunting."

One of the factors energizing this third wave is likely to be the explosion in interest in Taiwan, where bubble tea originated, as a travel destination. A record 1.97 million Japanese traveled to the island in 2018, almost double the figure from 10 years ago, according to the Taiwan Tourism Bureau.

But an even more important factor appears to be the ubiquity of social media this time round. 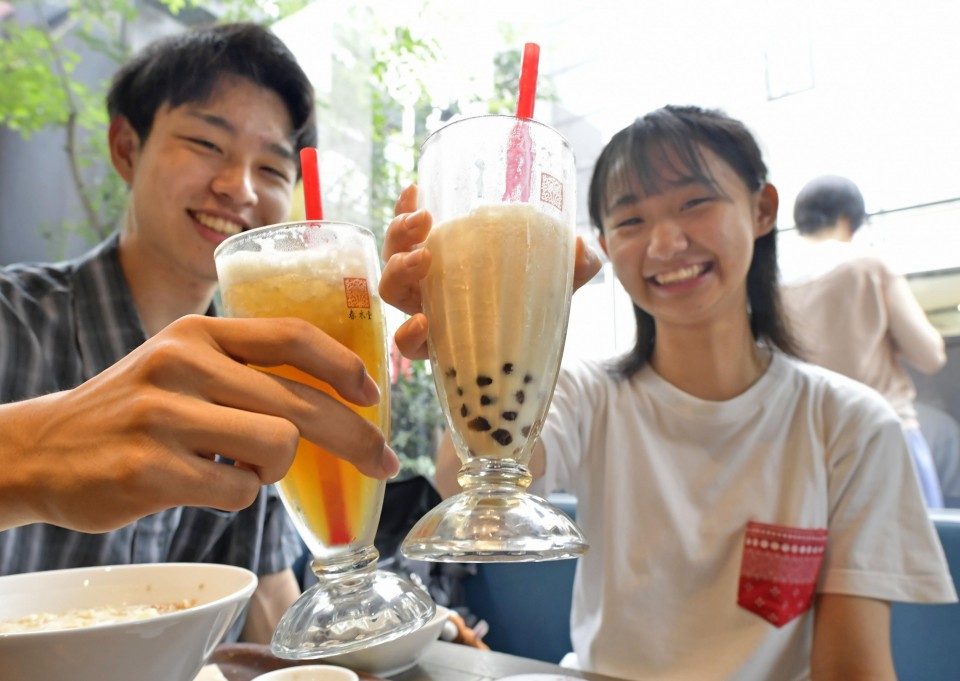 "(The drinks) are very Instagrammable, so when uploaded onto social media they look good," explained Megumi Ushikubo, a trend analyst and representative director of Tokyo-based marketing company Infinity Inc.

Meanwhile, less obvious trends may be sustaining the boom, too, Ushikubo suggested, such as changing eating habits among youth, many of whom no longer eat three meals a day. Because the starch-based balls are so filling, they "can stave off hunger to a certain degree," she said.

And then there is the unique texture of the pearls.

"I often hear people tell me that the squishy yet chewy texture of tapioca 'soothes' them," Ushikubo said. "In Japan, the number of young men and women with poor chewing ability, or weak jaws, has increased in recent years. Even when it comes to chewing gum, soft, squishy types are now more popular than the hard types we used to have."

The 1980s saw an increase of Japanese children who developed a habit of not properly chewing their food. This led to a growing preference for softer foods, which food manufacturers catered to. The result was a generation accustomed to eating soft foods and neglecting strengthening their jaws through conscious chewing.

Mirei Umemura, 24, who runs a website promoting the tea-based beverage called Tapioca Navi, has been fascinated by bubble tea since her junior high school days. By her own calculation, she has drunk more than 1,300 cups of the beverage.

"The famous Taiwanese chains built a reputation for being uncompromising in their tea leaves and extraction technique, and tapioca tea stores cropped up in Japan one after another," she said. Bubble tea began life in Taiwan in the 1980s, before spreading to parts of East and Southeast Asia in the 1990s. Around the same time, its presence also widened to countries with significant populations of Chinese and Taiwanese expatriates, such as the United States and Australia.

Chun Shui Tang, the famous Taiwanese tea shop which claims to have invented pearl milk tea, opened its first Japanese store in Tokyo's Daikanyama district in 2013. Following that, a succession of Taiwanese tea stores began to make their way into Japan.

"The foundation (of our company) since its establishment is to convey and popularize the culture of tea, which has a long history. The tea plays the leading role," said Mizuki Kikawa, 40, representative director of OASYS Tea Lounge Inc., which manages the Chun Shui Tang brand in Japan.

Taiwanese tea companies continue to branch out rapidly into regional cities, with Gong Cha, another major Taiwanese bubble tea franchise, planning to open 100 stores in Japan by 2020. The company touts the ability to customize the taste of tapioca beverages by selecting the base tea, sweetness level, quantity of ice, and toppings as a selling point of the chain.

According to Osaka Customs, tapioca imports in the Kinki region of western Japan for the first half of this year increased 21.4 times over the same period last year. 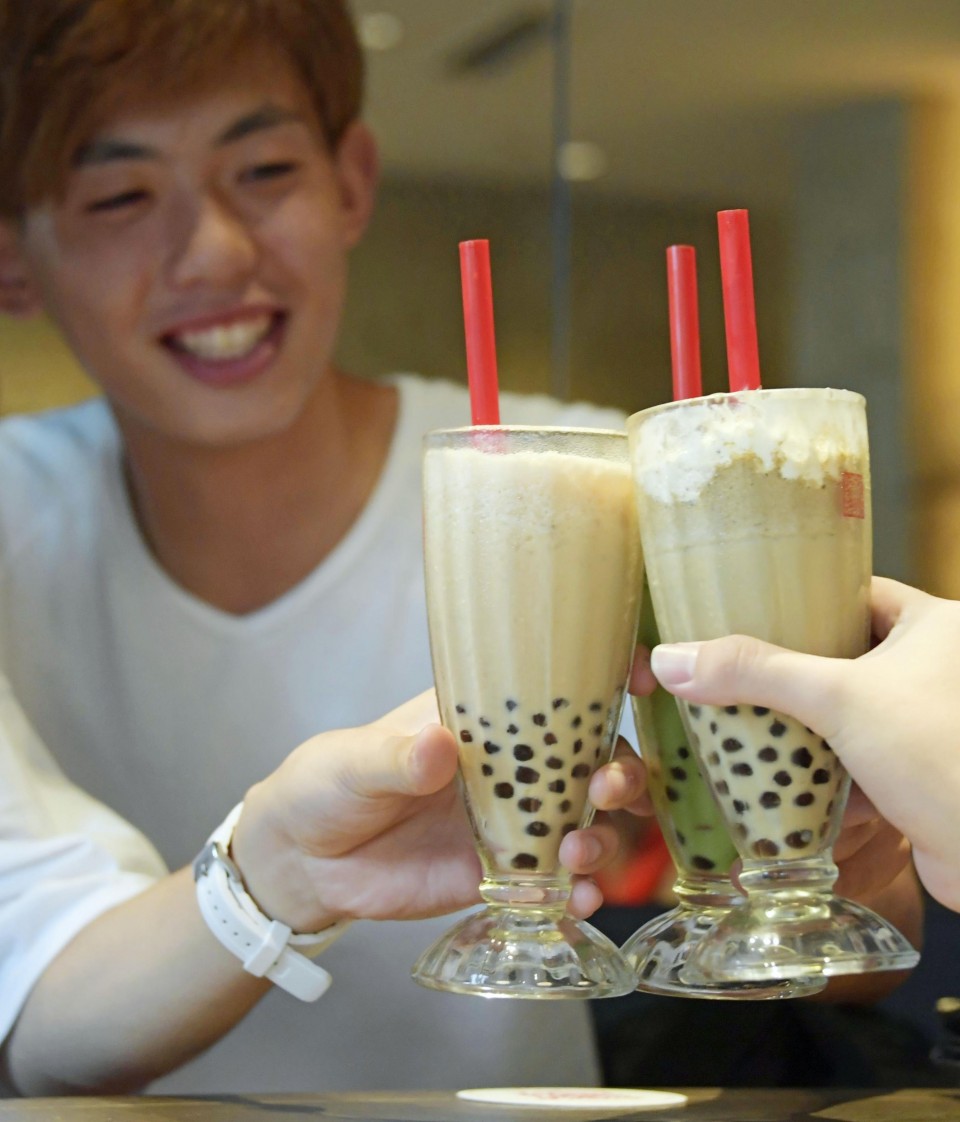 A customs official attributed the surge to an increase of tapioca drink stores as well as the addition of the beverage to the menus of many fast food and chain restaurants.

Even the yakuza have caught onto the trend, according to a story run by Shukan Post in June. The Japanese weekly magazine said a large yakuza group had opened a bubble tea store in a bustling Tokyo district near a station on the Yamanote Line.

"There's no easier trade to enter," a yakuza boss was quoted as saying.

With no special skills required, all one needs is to rent a little space and equipment and hire around two people to run the storefront. Things can be up and running for as little as 2 million yen ($18,400), he said.

The business also rakes in sizeable profits, requiring costs of only around 10 percent of the standard drink priced at 500 yen. Cheap tapioca acquired from China costs less than the ingredients to make the drink itself, so by offering free extra tapioca, you can seem generous but use fewer tea leaves and milk, killing two birds with one stone, he added.

The boom has also created its unique set of problems, such as the littering of plastic cups caused by a tendency for customers to prefer a "walk and drink" style. Given the lack of public trash cans in Japan, many have taken to stuffing the plastic cups in the PET bottle recycling bins next to vending machines, or simply throwing them into the street.

To alleviate the problem, Chun Shui Tang runs "Tapihapi Raise" every month as one of the activities of the Tapi Mil association, which it established to "make the world happy through tapioca milk tea."

The initiative recruits 10 bubble tea enthusiasts to engage in the collection of discarded plastic cups on the last Saturday of every month. Gathering in the morning at Chun Shui Tang's Omotesando store, participants are treated to a traditional Taiwanese breakfast in exchange for their volunteer work.

But how long will Japan's impassioned love for bubble tea last? Although food trends in Japan typically have a lifespan of around two years, Ushikubo predicts the current tapioca boom will continue till sometime around next fall.

"Many tourists from Asia, including Taiwan, are expected to come for the Tokyo Olympics. So this boom will not only be driven by Japanese people but also by visitors from overseas," she said.