Foreign dignitaries enjoyed a rare joint show of Japanese traditional arts on Wednesday at a banquet following the enthronement ceremony of Emperor Naruhito the previous day.

During the evening event, hosted by Prime Minister Shinzo Abe and his wife Akie at a Tokyo hotel, top-level actors from three different traditional arts -- Kyogen, Kabuki and Bunraku -- performed together in a single play. It was followed by a Noh masked theater performance with a parent-child succession of lions as its theme.

Nomura Mansai, 53, of Kyogen comedy, Ichikawa Ebizo, 41, of Kabuki theater, and Yoshida Tamao, 66, of Bunraku puppet theater, together performed "Sambaso," a play for celebratory occasions in which actors dance as an expression of wishes for a rich harvest. 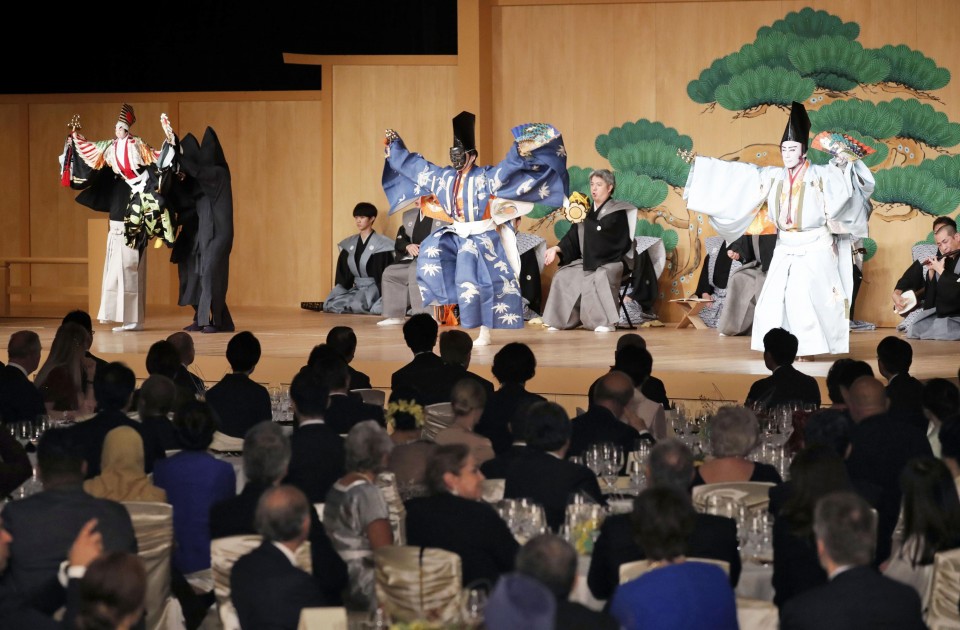 The performance came after Emperor Naruhito proclaimed his enthronement on Tuesday before an audience of leaders and representatives of Japan as well as some 190 other countries, in what was a major ancient-style ceremony held at the Imperial Palace, the equivalent of a coronation.

He ascended the Chrysanthemum Throne on May 1, a day after his father, former Emperor Akihito, stepped down as the first Japanese monarch to abdicate in about two centuries.

Mansai, the general adviser for the banquet, said in a recent interview with Kyodo News that he hoped the guests would "feel the diversity and coexistence of Japanese art and culture" through the traditional plays.

"Japanese art and culture are highly diverse," said Mansai, explaining that artistic forms emerging later have not defied earlier ones, but rather have coexisted with them.

He also expected that the performance of "Shakkyo" ("The Stone Bridge") by Noh actor Kanze Kiyokazu, 60, who studied together with Emperor Naruhito from elementary school through high school, and his son Saburota, 20, would highlight the history of succession from father to son.

"Shakkyo" features lion-like mythical creatures by a stone bridge on a mountain known as the holy place of Manjushri, the Buddhist bodhisattva of wisdom. The play is based on a legend in which a father lion deliberately pushes his cub into a ravine to force him to crawl back up and become stronger. 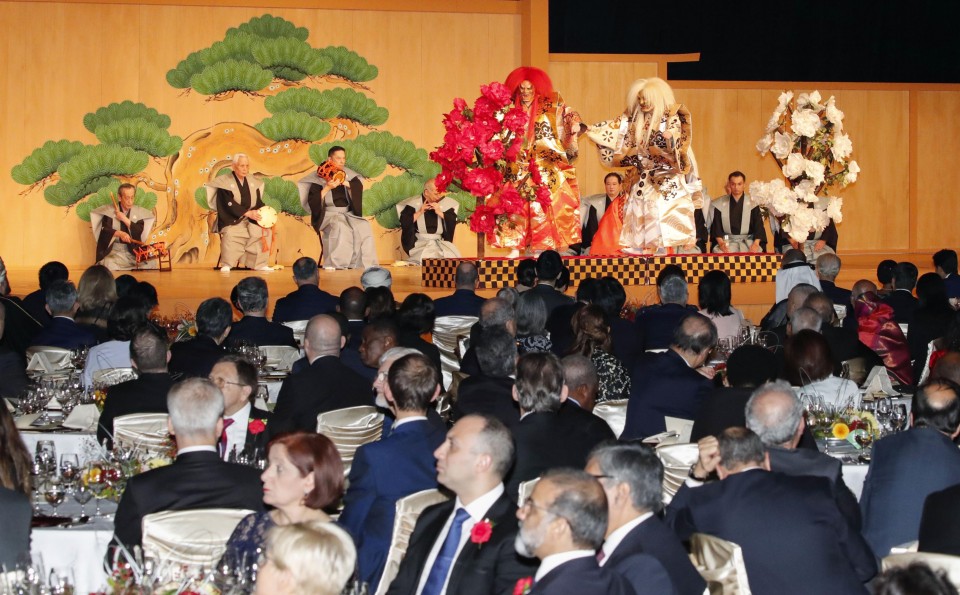 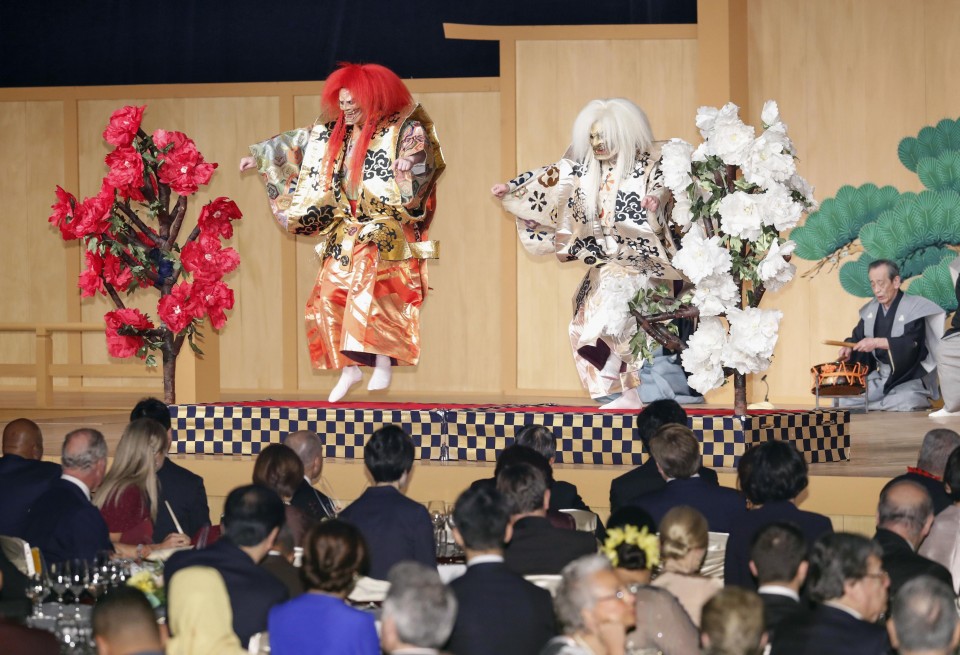 (A Noh masked theater is performed during a banquet.)

Noh and Kyogen were established around the 14th century, while Kabuki traces its origin to dance from the early 17th century. Bunraku evolved from puppet plays of the late 17th century.

Mansai, who is also a supervisor for the opening and closing ceremonies of the Tokyo 2020 Olympics and Paralympics, said the banquet's basic concepts of diversity and coexistence represent what he wishes to convey at the sporting events.

In a speech at the event, Abe pledged to contribute to world peace, touching on the start of the new era.

"We are determined to further contribute to the promotion of world peace and prosperity, as well as mutual understanding, in this Reiwa era by going hand in hand with the international community," Abe told the attendees. 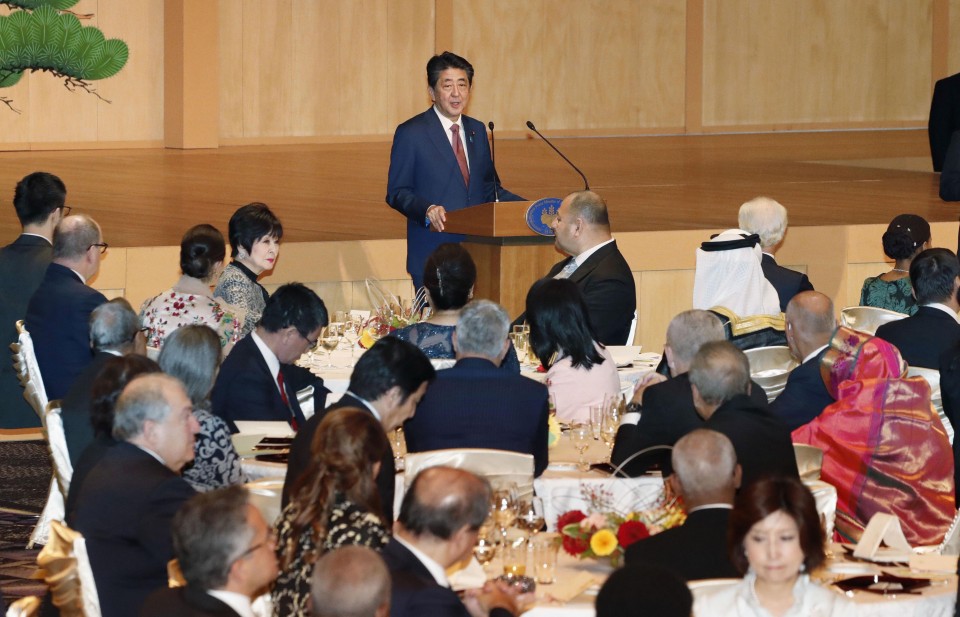