Japan's Akira Yoshino, America's John Goodenough and Britain's Stanley Whittingham won this year's Nobel Prize in chemistry on Wednesday for their contributions to the development of lithium-ion batteries.

"Lithium-ion batteries have revolutionized our lives since they first entered the market in 1991. They have laid the foundation of a wireless, fossil fuel-free society, and are of the greatest benefit to humankind," the Royal Swedish Academy of Sciences said.

Yoshino, 71, is honorary fellow at Japanese chemical company Asahi Kasei Corp. and a professor at Meijo University. U.S. chemist Goodenough, 97, holds the Cockrell Centennial Chair in Engineering at the University of Texas at Austin, while Whittingham, 77, is a distinguished professor at Binghamton University.

The academy said Whittingham created an innovative cathode in a lithium battery from titanium disulphide in the 1970s that can store lithium ions.

Goodenough, predicting that the cathode would have a greater potential if made using a metal oxide, demonstrated in 1980 that cobalt oxide could help create more powerful batteries, it said. 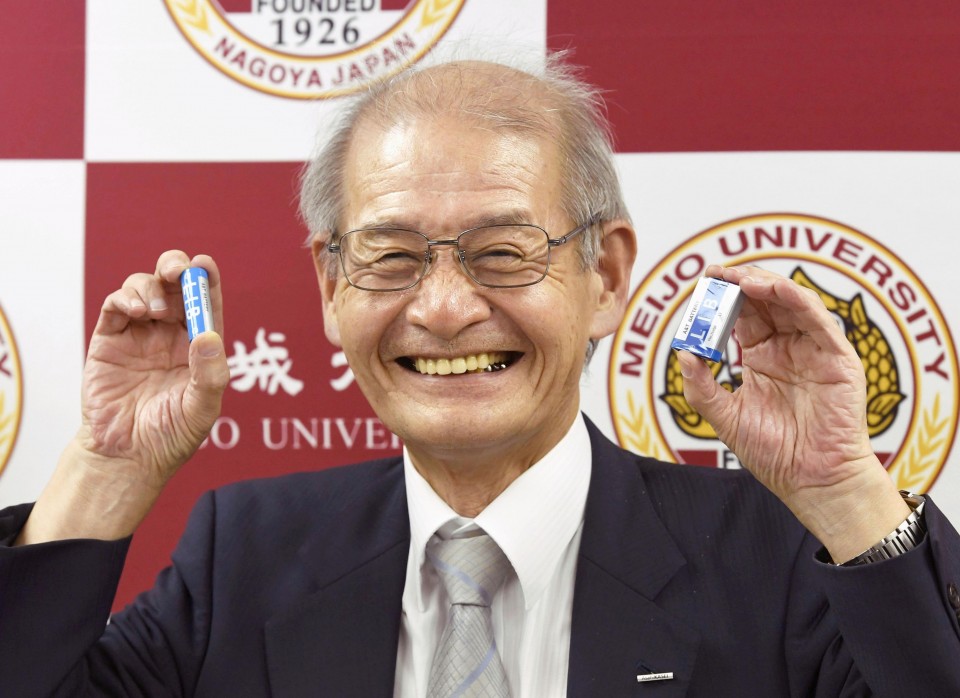 Based on Goodenough's cathode research, Yoshino used a carbon material in the anode and in 1985 created the first commercially viable lithium-ion batteries, lightweight rechargeable power sources currently used in a wide range of electronic devices including smartphones and laptop computers.

"The advantage of lithium-ion batteries is that they are not based upon chemical relations that break down the electrodes, but upon lithium ions flowing back and forth between the anode and cathode," the academy said.

It praised the three laureates for taming lithium's reactivity to harness it for use in batteries.

"The real form of lithium-ion is full of mystery. If I go back to the basics of my research, I could discover ideas and technology different to what we have now. It's very exciting," said Yoshino at a press conference held in Tokyo following the announcement.

The prize of 9 million Swedish kronor ($904,600) will be divided equally among Yoshino, Whittingham and Goodenough, who became the oldest person in history to be awarded a Nobel Prize.