More than 300 financial institutions in the world invested a total of $748 billion in companies involved in the nuclear weapons industry in a two-year period through January, according to a report by an international nongovernmental organization.

The total investment was up 42 percent from the tally in the previous report, which covered 20 companies in a period between January 2014 and October 2017, according to Susi Snyder, a PAX member who is the main author of the new report.

The total investment is increasing as nuclear weapon states such as the United States and Russia are advancing arms expansion and developing new nuclear weapons, Snyder said in an interview in Tokyo. 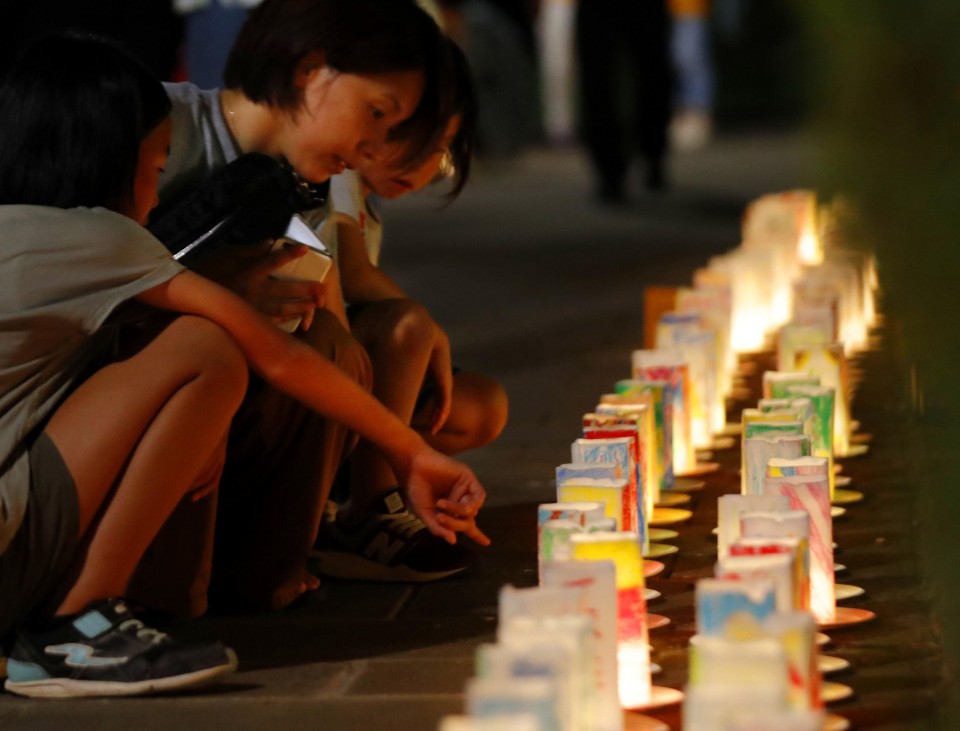 (People look at candles lit up at the Peace Park in Nagasaki on Aug. 8, 2019, a day before the 74th anniversary of the U.S. atomic bombing of the southwestern Japan city)

She attributed the increase to a 192 percent jump by Boeing and a 300 percent surge by French defense company Thales SA.

Snyder, however, said the number of investors "continues to drop" amid rising criticism against investment in inhumane weapons such as nuclear bombs.

She cited a provision in the nuclear weapons ban treaty banning "to assist" developing nuclear weapons or other nuclear explosive devises. The treaty was adopted in 2017 at the U.N. General Assembly.

Snyder praised Resona Holdings Inc. for not providing loans to borrowers that are involved in the development of nuclear weapons.

Such a policy is "a really positive step" toward reducing -- and eventually eliminating -- nuclear weapons, she said.

Of the eight Japanese lenders listed in the report, Fuyo General Lease Co. said it has not invested in nuclear weapon producing companies, although a company that had business dealings with a Fuyo subsidiary in the United States was acquired by a nuclear weapons-related company.

Sumitomo Mitsui Trust Holdings Inc. said it invests in the given companies through some index funds handled by a group company.

PAX focused on all financial institutions involved in underwritings of share and bond issuances for one or more of the 18 companies since January 2017 and own at least 0.5 percent of the outstanding shares or bonds of at least one of the companies based on the latest data available through June last year.