Japan's glorious run at the Rugby World Cup came to an end Sunday as South Africa used their physicality to stop the hosts' running game, allowing the two-time champions to win the quarterfinal 26-3.

In front of 48,831 at Tokyo Stadium (Ajinomoto Stadium), the Brave Blossoms lived up to their name for approximately 55 minutes before they finally succumbed to the Springbok onslaught.

"Test match rugby is all about creating opportunities and taking your moments," said Japan captain Michael Leitch. "We had a few opportunities to capitalize on. Unfortunately, South Africa kept us out there with their powerful set pieces. They had us going backward."

"So, congratulations to the South African team. They played their A-game and they played it very well, so I wish them all the best of luck for coming games." 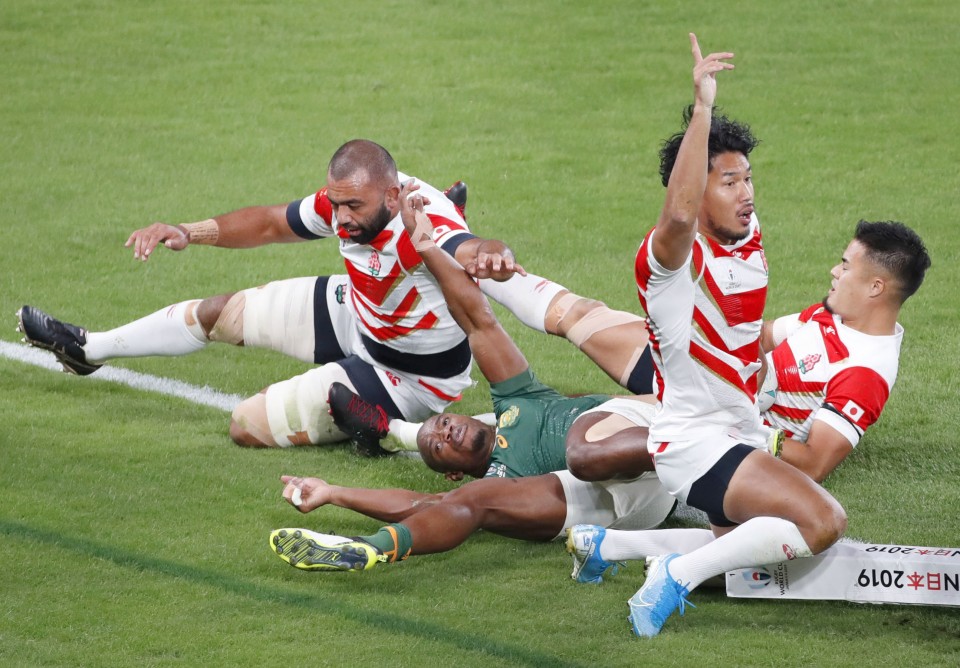 South Africa will have at least one more game, with Rassie Erasmus and his team marching on to a semifinal clash with Wales, who beat France 20-19 earlier in the day in Oita.

One moment from the match in Tokyo will no doubt be questioned for some time, with referee Wayne Barnes' decision to only award a yellow card to Tendai Mtawarira for a dangerous tip tackle in the first half leaving Japan with quite a few what-ifs.

"Fifty percent of the time that would have been red," said Japan coach Jamie Joseph. "It would have changed the game for sure."

But on a night when Kenki Fukuoka and Kotaro Matsushima shone in their defensive duties, it was the work of another of the small men on the field, Faf de Klerk, that ultimately made the difference.

The South Africa scrumhalf was often responsible for the aerial bombardment that rained down on Japan. He also led their defensive effort and was named man of the match. 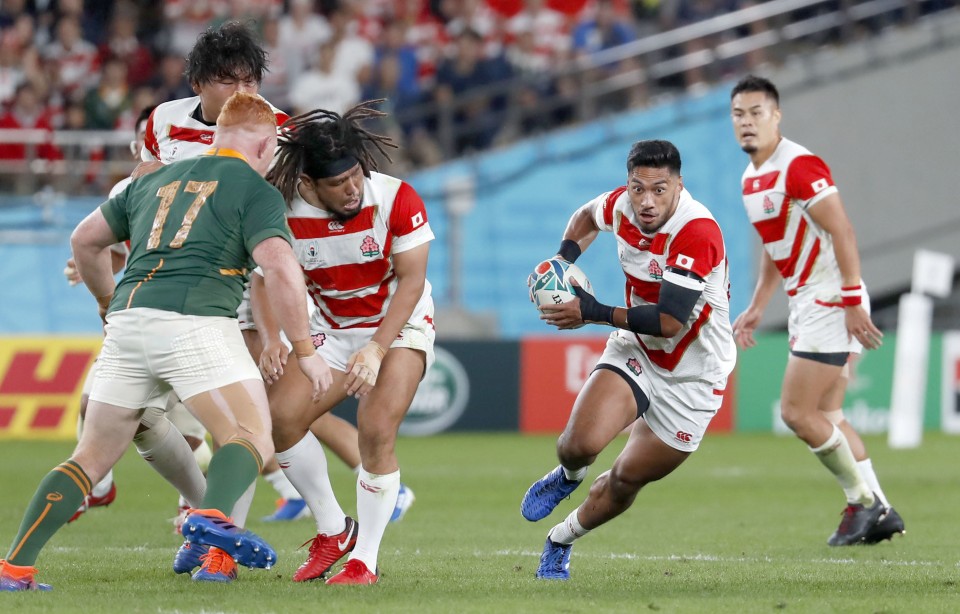 (Timothy Lafaele of Japan runs with the ball.)

"They're a great team and a great attacking team and our defense stuck with it," said de Klerk.

"We struggled with our area game a bit, they contested very well, everything we kicked they managed to catch," he said.

"At the start of the second half we started getting a few (kicks) back and managed to get a bit of purchase from that. All in all, I'm very happy with how it turned out, but there are still a few things we can work on."

Following a stirring rendition of both national anthems, the teams made their intentions known as Japan looked to play at pace and improvise, and South Africa used their big forward pack.

It was the latter that had an immediate impact when a good scrum allowed Makazole Mapimpi some space on the blindside and the wing made the most of a poor tackle attempt from Yu Tamura to go over in the corner with just four minutes on the clock. 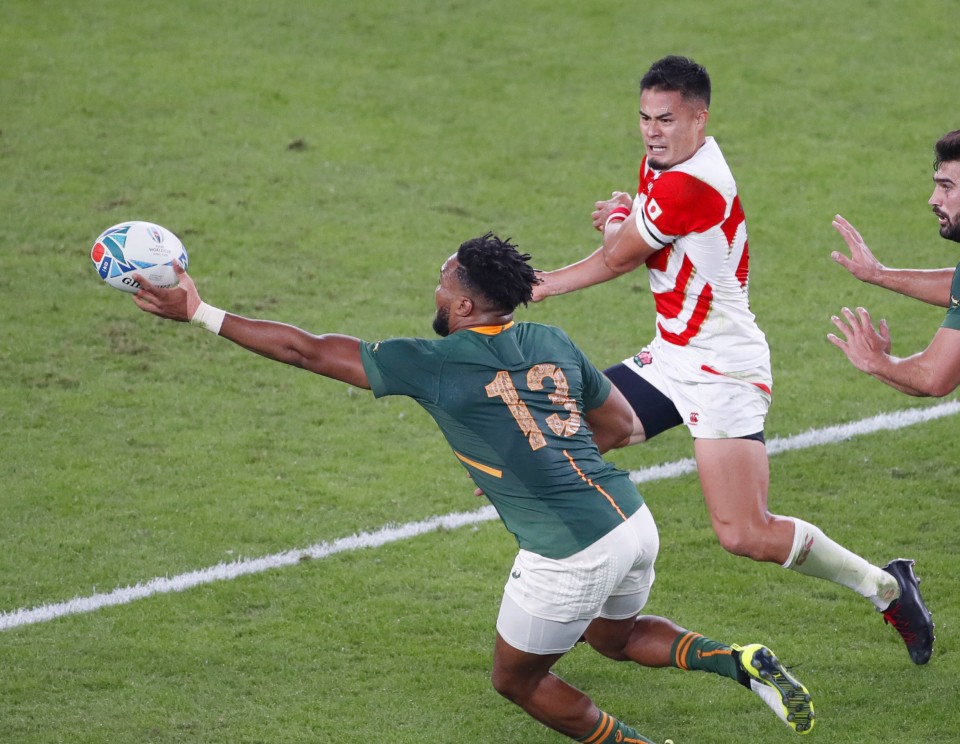 Tamura did not have the best of games when the two sides last met in September and despite winning four pool games at this tournament -- including one each against heavyweights Ireland and Scotland -- he and his team needed to settle early nerves.

Mtawarira's yellow card for his tackle on Keita Inagaki allowed them to do that and handed Japan a numerical advantage.

The Brave Blossoms looked as if they had failed to make the most of it, however, despite an electric break from Fukuoka that was only stopped by a good tackle from Damian de Allende.

But a tighthead scrum in the 19th minute eventually saw the Springbok pack penalized and Tamura banged over a penalty to make it 5-3.

Japan continued to play at pace and chance their arm and dominated possession and territory. 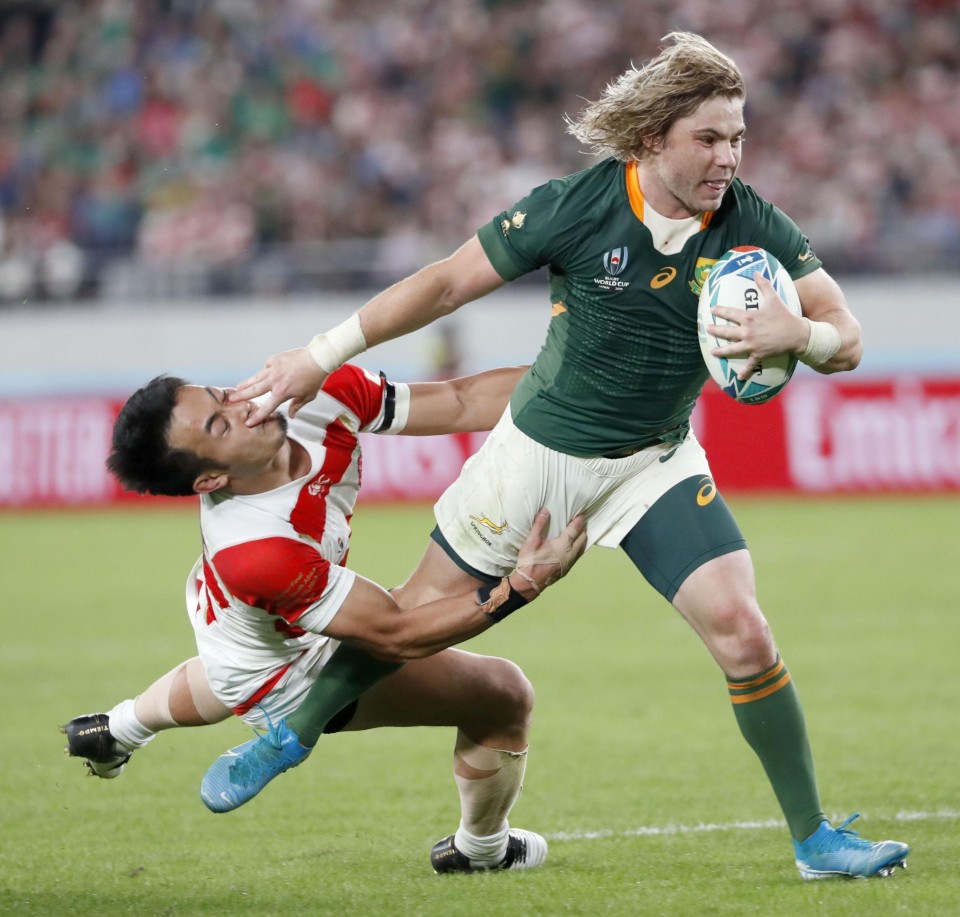 (Faf de Klerk (R) of South Africa bursts through a tackle by Kenki Fukuoka of Japan.)

By the 29th minute, they had made 11 offloads to zero by the Springboks, who stayed in the game thanks to their well-organized defensive structure.

A rare error from Leitch almost saw Mapimpi go over for a second but a great defensive effort from Matsushima saved the day and ensured there were still just two points between the teams as they headed to the sheds.

Japan had dominated the first 40 minutes in terms of possession and territory had forced South Africa to make almost three times as many tackles.

"We were nervous at halftime," said Springbok coach Rassie Erasmus. "There was a quietness in the changing room but we have been together 17 weeks and knew which buttons to press." 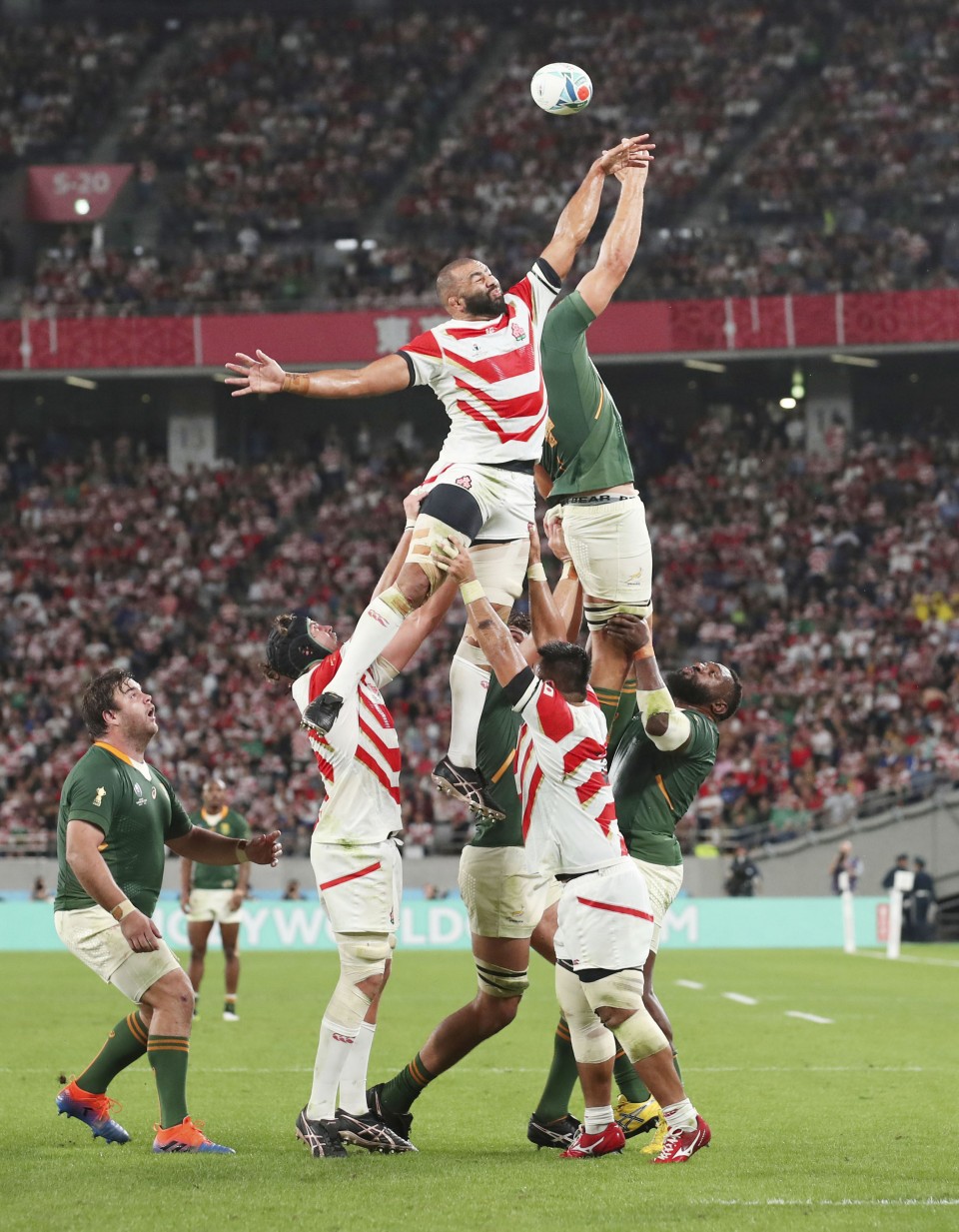 ( Michael Leitch (L) of Japan goes up for a lineout.)

"It was all about trying to get our confidence up. (The scarcity of points) wasn't through lack of effort but because of the tenacity and intensity of the Japan team."

The second half was going to be all about which bench would have the most impact and which side could make the most of the opportunities that came their way.

South Africa had gone with six forwards, while Japan had opted for the traditional 5:3 split with a number of powerful runners in the forwards and backs.

Three penalties from Handre Pollard saw South Africa stretch their lead as the Springbok forwards started to exert their power. 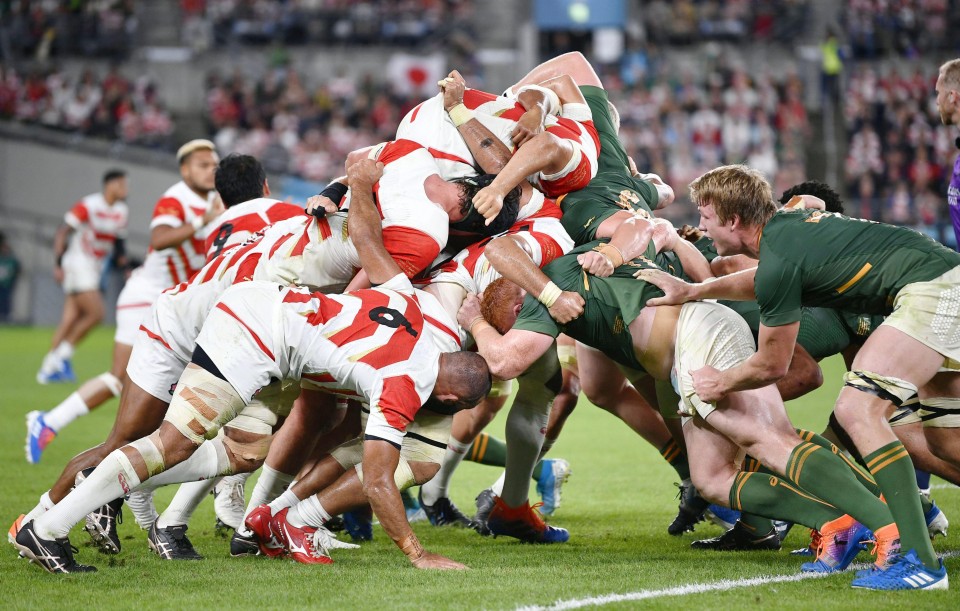 With 17 minutes left on the clock and down by 11, Japan could not afford to give up another score.

The Springbok stranglehold on the game continued, though, as their forwards' driving maul made meters and meters and tired the Japan defenders.

And from the back of one such maul in the 66th minute, de Klerk went over for a well-deserved try.

Mapimpi added a second from long range four minutes later before the Springbok defense once again closed up shop to stop Japan finishing their amazing run on a high.

"In those last five minutes we were down by 20 but showed a never die attitude," said Joseph.

"There were guys there with broken ribs, guys who had been replaced who had to come back in off the bench and they kept getting up."

"That attitude will help us go forward after the World Cup." 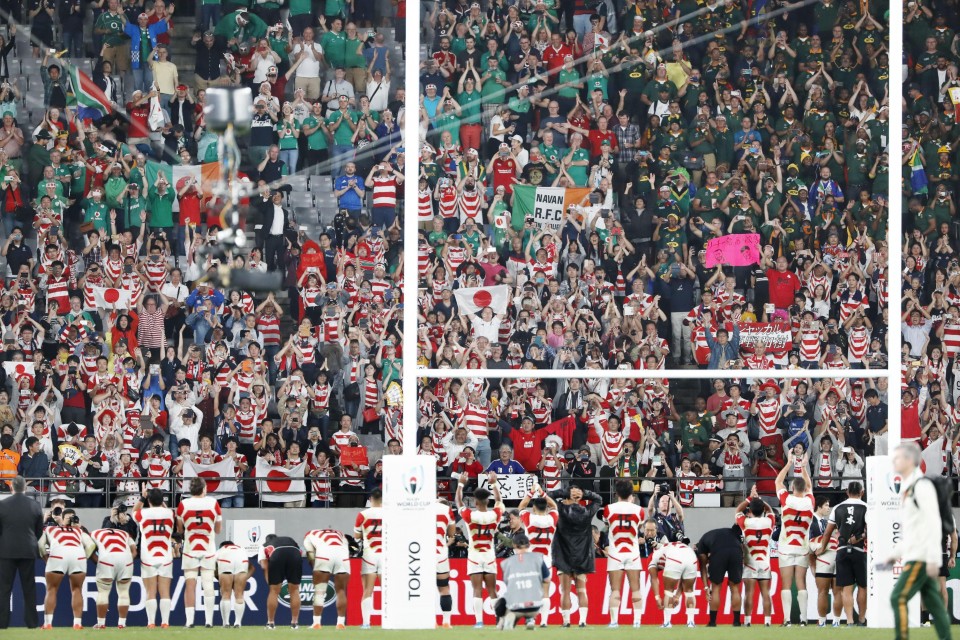