A Filipino technical intern picks strawberries from elevated beds as he backs down an aisle on a swivel chair in a greenhouse -- a common scene in the mountainous area of central Japan known for highland agriculture.

Farmers from Benguet, an upland province on the Philippines' Luzon Island that is also a major vegetable producer, have been interning under a training program sponsored by the Japanese government in the Yatsugatake region of Nagano Prefecture, which has an environment similar to their homeland.

At the strawberry farm in the Nagano village of Minamimaki, six Filipinos work from 5:30 a.m. to 5 p.m. in the harvest season from summer to fall, picking fruits as well as leaves to ventilate the plants, under the tutelage of Tatsuo Kikuchi, the 67-year-old owner of the facility.

Their labor is indispensable for the farm, which is just one example of the country's many agricultural communities affected by aging farmers and the overall population decline.

"We cannot do farming without technical interns. Without them, it's just my wife and me so it is impossible to do this much," Kikuchi said. The fruit picked there are shipped straight to Chateraise Corp., a nationwide cake shop chain.

"I'd like to study how to plant the strawberries, take good care of (them) to produce more fruits," said Eleazar Labi, 31, who has been working there since April last year. Hailing from a family that used to grow lettuce and cabbage, Labi said he hopes to cultivate strawberries after going back home if he can earn enough money. 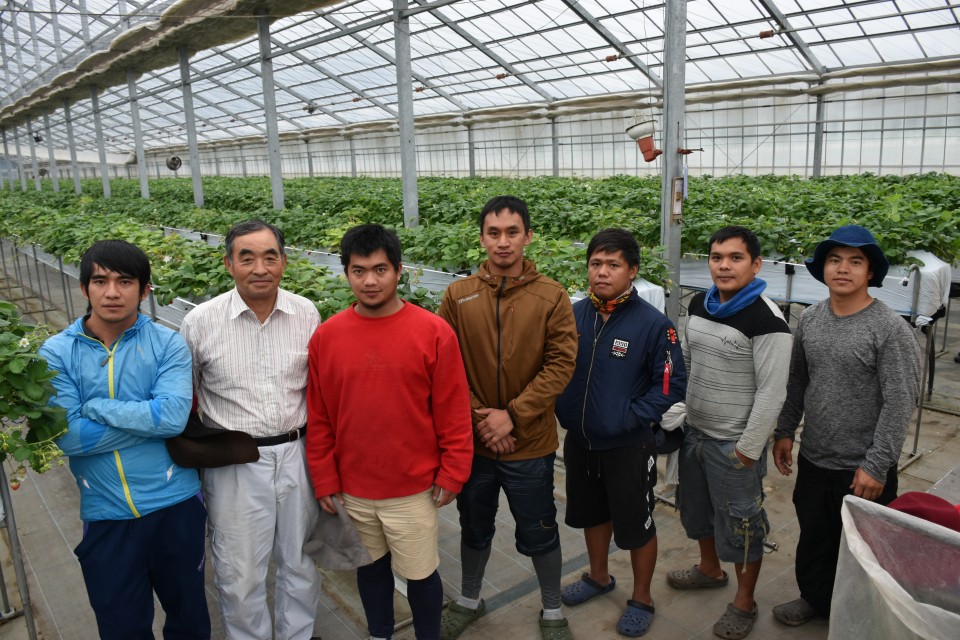 Labi and other technical interns in the region were earning 821 yen ($7.70) per hour as of September, the minimum wage for Nagano Prefecture at that time. But he said, "It is 300 pesos ($5.80) a day (in the Philippines)," adding that the daily allowance back home is the equivalent of about an hour's work in Japan.

"I saw a lot of former technical interns working hard for their farms after returning to Benguet. That's why I want to support them," said Kikuchi, who travels to the Philippine province every year and helps local farmers when they require any assistance.

Noting that the quality of Benguet highland vegetables has improved greatly compared to the level more than a decade ago, Kikuchi said, "Now they are not inferior to Japanese lettuce and broccoli."

The Yatsugatake farms began accepting Benguet technical interns in 2008 as part of the Japan International Cooperation Agency's grassroots technical cooperation program, which aims to increase income for Benguet farmers with environmentally sustainable agriculture. So far, 335 Filipino farmers have worked at about 30 farms producing highland vegetables and strawberries in the region.

Joshua Baynes, a 23-year-old Filipino technical intern, working at a different Nagano farm, removes broccoli from the ground, separates the leaves with a knife in less than 20 seconds, and puts them in a plastic box ready for quality inspection.

Yoshio Takamizawa, a 60-year-old worker at the broccoli farm in Minamimaki, said, "I don't just teach them how to cut or plant broccoli but also how to plan (the farming business) both in the short and the long-run and the management."

As a whole, Japan's agricultural industry has become more and more dependent on such interns, with their numbers almost doubling from 2014 to some 28,000 as of 2018, according to data from the Ministry of Agriculture, Forestry and Fisheries.

Around 50 Benguet technical interns are sent to the region every year. With revisions made to the internship program to increase the number of foreign workers amid Japan's labor crunch, they can now stay in the country for up to five years.

The plan started in 1993 with the aim of transferring technical skills to developing regions of the world. However, it is often criticized as being a vehicle to import cheap labor and notorious for reported abuses, including low and unpaid wages, excessive hours, violence and sexual harassment.

But Toshihiro Shimizu, a 50-year-old senior official of the Japan Agriculture Exchange Council, which coordinates the Yatsugatake training program for Benguet farmers, claimed this particular plan "coincides with the original purpose of the program and can alleviate the acute labor shortages at Japanese farmlands."

The state-sponsored technical internship program also came under fire after thousands of interns went missing from their workplaces, with a survey by those tracked down by authorities later revealing that many left after feeling they had been mistreated on the job.

According to the Justice Ministry, about 9,000 technical interns went missing in 2018 alone, accounting for 2.1 percent of the 424,394 who were in Japan that year. The ratio had been around 2 percent every year since 2014. 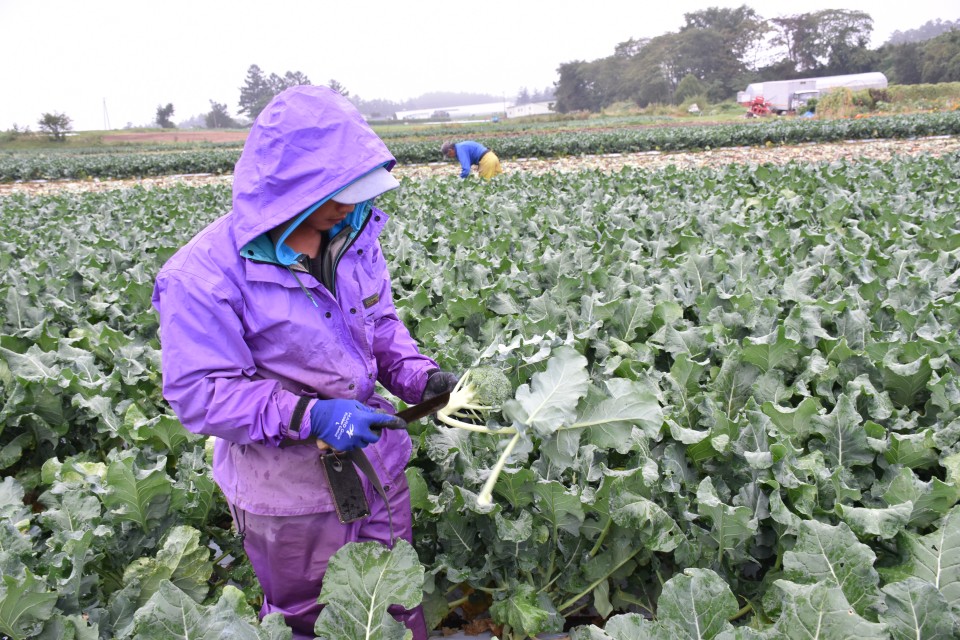 JAEC's Shimizu said he believes there have been no cases of disappearance in the Yatsugatake training program since the project started in 2007 as the interviews it conducts in the screening of around 100 intern candidates every year function as a deterrence.

"We only select people with agricultural backgrounds, checking whether the person's family are engaged in the business or have an educational background of farming. I think this is an ideal model," Shimizu said. "More than 90 percent of those who interned in Japan are engaged in farming once they go back to Benguet."

Before the start of the project, Masaki Yokomori, 79-year-old now-retired lettuce and Chinese cabbage farmer in the Yatsugatake region, traveled to Benguet in 2006 to find one of the candidate sites for the program. Afterward, he started coaching locals on how to enhance their ability to farm and increase productivity that would boost their incomes.

To address soil problems caused by chemical fertilizers and pesticide residue, Yokomori demonstrated organic farming by using wood vinegar and natural compost in Benguet and persuaded local officials to construct a facility for making the vinegar. 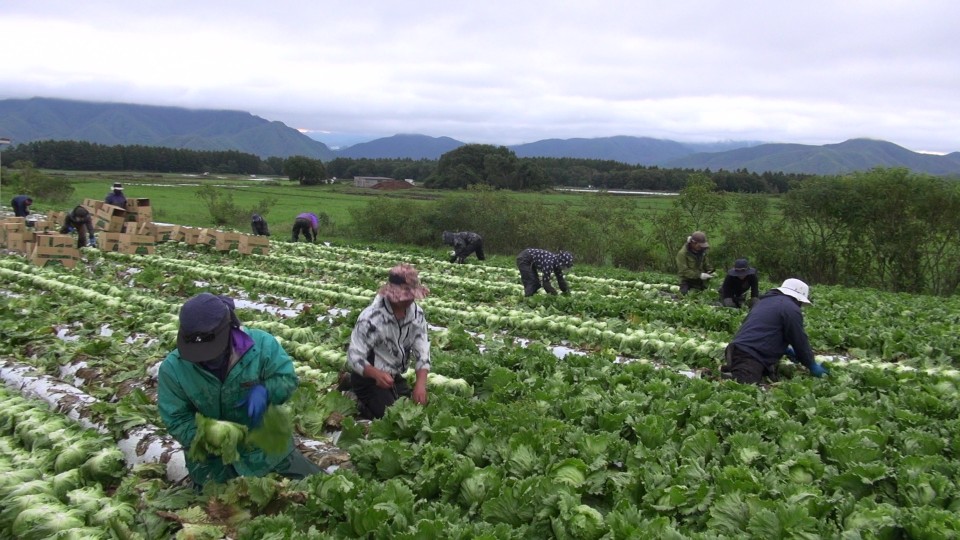 "Another issue in Benguet is the ability to ensure a stable supply," Yokomori said, referring to the importance of planned cultivation. "Planting the same crop on the same ground continuously will damage the soil."

Yokomori stressed the significance of the Yatsugatake training program, saying, "It is easier to teach those who come back home after gaining some expertise in Japan."

Yoneo Shizukuda, 64, a lettuce farmer and a Minamimaki village assembly member, who also accepts technical interns, said shipment methods must be improved in Benguet as the local practice of shipping lettuce without being boxed undermines quality. He also said local farmers can slash costs by cutting out some middlemen.

JAEC's Shimizu said shipping improvements are under way in Benguet as part of the Japan-sponsored program, with up to 2 tons of vegetables put into containers with ice and sent to Manila every week, more than 200 kilometers south of the highland city.

"The vegetables are shipped more frequently with fewer middlemen. They are targeted at wealthy consumers as demand is increasing amid the country's fast economic growth," Shimizu said. Now those Benguet vegetables fetch prices up to 1.5 times higher than those sold in the capital's market, he added. 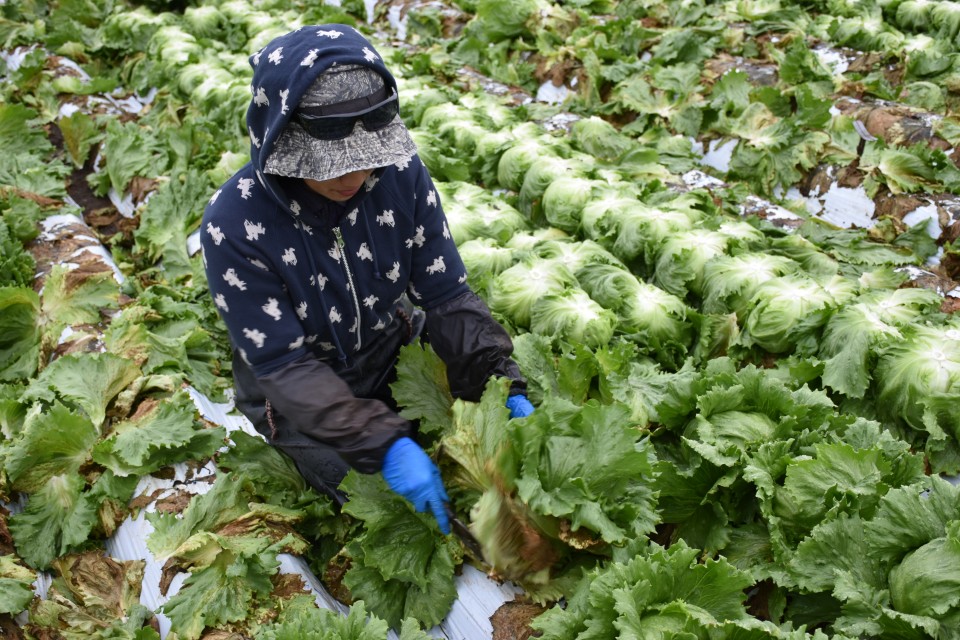 Carmi Agmaliw, 25, who has been working at a lettuce farm in Minamimaki since April 2017, said she learned the quality of the vegetables in Japan is good because of the attention paid to harvesting time management.

Agmaliw, whose family grows bok choy, a type of Chinese cabbage, said, "In Benguet, when the price of the vegetable is high, people harvest, although the fertilizer (has not yet been absorbed by) the plants" and the quality is not so good. "But I learned that for good quality, they should wait to harvest," she said.

The intern revealed her plan to inherit the family business back home. "I am putting my earnings in the bank. I am planning to plant bok choy or lettuce in a greenhouse if I have enough money. I'll try to invest (my money)," she said.