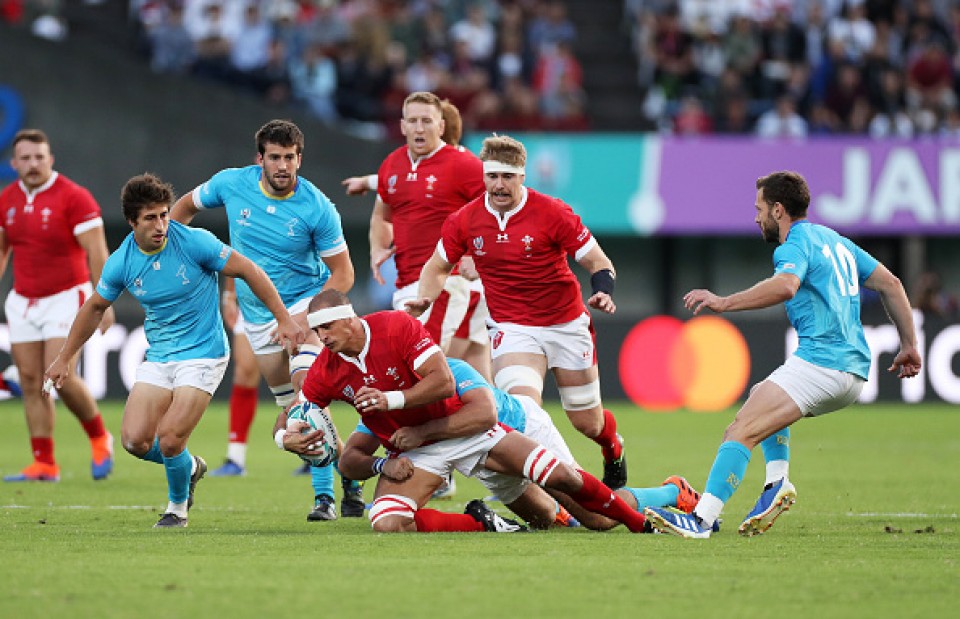 KUMAMOTO, Japan - Wales struggled against minnows Uruguay before claiming a 35-13 victory Sunday that sees them finish the Rugby World Cup pool stage with a perfect record.

The title hopefuls had their hands full against the lowest-ranked team in Pool D, taking a 7-6 lead into the break at Kumamoto Stadium following a frustrating opening stanza in which they repeatedly gave away the ball through penalties and handling errors.

The disappointing performance was not what coach Warren Gatland hoped to see from his side in the lead-up to their quarterfinal showdown with France in a week's time.

With fierce competition for selection among the Wales squad, few of the 13 incoming players to the largely second-choice XV made a convincing case for quarterfinal selection in the five tries to one win.

"I'm happy with four (wins) from four, not too happy with some of tonight," Gatland said. "We were poor at times, not clinical, too many turnovers in that first half and probably blew about four or five chances, but we showed a little bit of character in the second half."

Esteban Meneses' Uruguay, meanwhile, can leave the tournament with heads held high, having battled valiantly against the world No. 2 side just a week after taking the fight to Australia in a 45-10 loss in Oita.

"I am very proud of the players, they really believed in their own talents and capabilities," said Meneses, whose side finished the tournament with one win, a 30-27 upset of Fiji.

"We were able to achieve our objective of playing as though we deserved to be here at this tournament."

Following a moment's silence for the lives lost in Typhoon Hagibis, which lashed Japan on Saturday, Gatland's men attacked using the width of ground early, with only unforced errors and some stout try-line defense from the South Americans preventing them going ahead in the opening minutes.

Wales had a try wiped away by the television match official in the 10th minute when flanker Aaron Shingler was deemed in touch as he crossed in the corner following a lineout.

The Six Nations champions camped out near the Uruguayan try line and pressured Los Teros into giving away a succession of offside penalties.

After opting for a scrum, Wales patiently went through 14 phases before prop Nicky Smith finally drove over for his first test try.

The TMO took another try from the men in red on 25 minutes for a forward pass from center Owen Watkin, who had combined with flyhalf Rhys Patchell to send winger Hallam Amos over down the left side.

Following a rare foray into the opposing half, Uruguay caught the Welsh offside, allowing Felipe Berchesi to cut the lead to 7-3 with a penalty from 35 meters.

The Uruguayans had a real chance to take the lead near halftime as they closed within 15 meters of the Welsh try line. After Australian referee Angus Gardner signaled another offside penalty, Berchesi added the three points to close the gap to 7-6.

After turning over the Uruguayans and winning a penalty early in the second half, Wales' attempt at the three points was thwarted by the woodwork, with Leigh Halfpenny hitting the upright from 45 meters.

Following an offload from Shingler, second-row Bradley Davies was stopped near the line, but the Welsh recycled the ball through Aled Davies and Patchell, who fed winger Josh Adams for his fifth try of the tournament.

The Welsh extended the lead in the 65th minute when Gardner awarded a penalty try after the Uruguayans illegally stopped the maul.

But the men in sky blue were not ready to give up the fight, and with the crowd rallying behind them, they strung together phases on the Welsh try line before hooker German Kessler burst over in the 70th minute, cutting the deficit to 21-13 following Berchesi's conversion.

The Welsh immediately answered back, with replacement Tomos Williams sprinting across on the left side.

Winger Amos completed a forgettable night when he failed to ground the ball following a surging run, leading to another Welsh try being wiped away in the closing minutes.

Following a quick tap from a penalty, late replacement Gareth Davies ran in the final try of the game in the 84th minute.

Meneses said Uruguay's performance at the tournament showed how far the country had come in the past four years, but stressed they needed more matches against top sides to continue making progress.

"In order to really compete with the Tier-1 countries, we have to play against them more. I think it is really important that we have that opportunity," the Argentinian said.