It was Samoa coach Vaeluaga Steve Jackson who mentioned poker in Saturday's post-match press conference, but if you were a gambling man, it is Japan coach Jamie Joseph who you would want to go to Las Vegas with.

For everything Joseph has predicted seems to have come true, so far, in this Rugby World Cup.

Ten days ago, Joseph said his team needed "to play the game of their lives to beat Ireland." And they did.

This week he said having experienced players such as Shota Horie, Fumiaki Tanaka and Kenki Fukuoka to call on from the bench would be essential if things were not working properly.

And sure enough it was the steadying influence of Tanaka and Horie and the speed of Fukuoka that eventually saw Japan make it three wins from three games in Pool A as they beat Samoa 38-19 and move ever closer to a first ever appearance in the quarterfinals.

"We showed incredible belief and worked to the very end," Joseph said. "The bench that came on in the second half had a massive impact. That's one of the reasons we were successful."

And of the veteran scrumhalf he said, "Fumi offers us experience, is clinical and understands what is going on and what needs to be done."

With Japan struggling to put the Samoans away, Tanaka not only directed traffic but put in one telling tackle that forced a turnover. 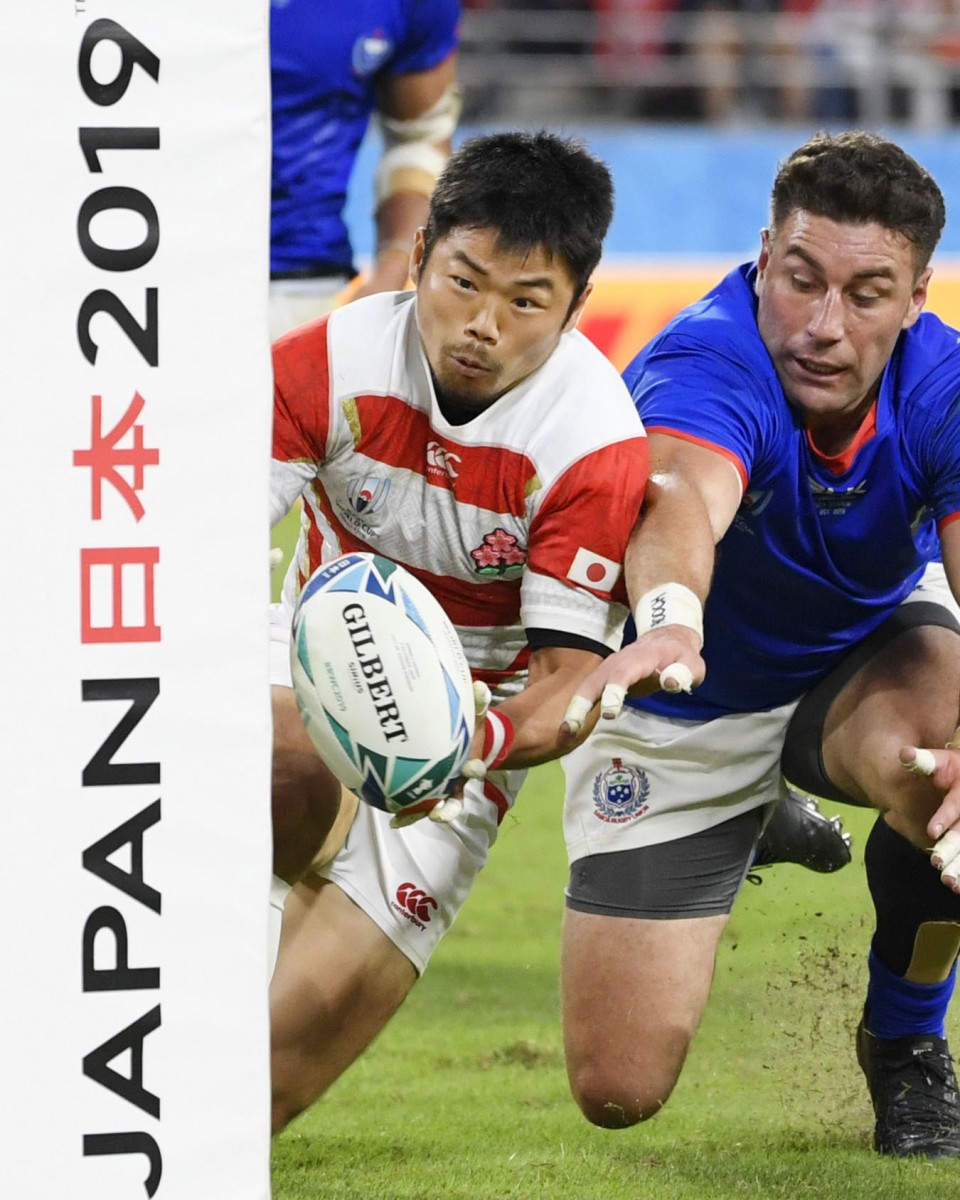 It was a moment that saw the crowd finally believe victory was on following an uncertain 70 minutes in which nerves seem to get to the hosts in the face of some battling and resilient opposition.

"We really had to earn the victory tonight," Joseph said.

The two sides were pretty much evenly matched in terms of possession and territory, as Japan opted to kick away much of the ball they won.

"We never wanted be on the receiving end of their physicality. We were intent on tiring them," said wing Kotaro Matsushima, whose 84th-minute try secured the bonus point.

Though as Matsushima and Joseph pointed out, there were times when the kicking game did not quite go to plan -- something they will need to rectify when they take on Scotland next Sunday in the pool finale. 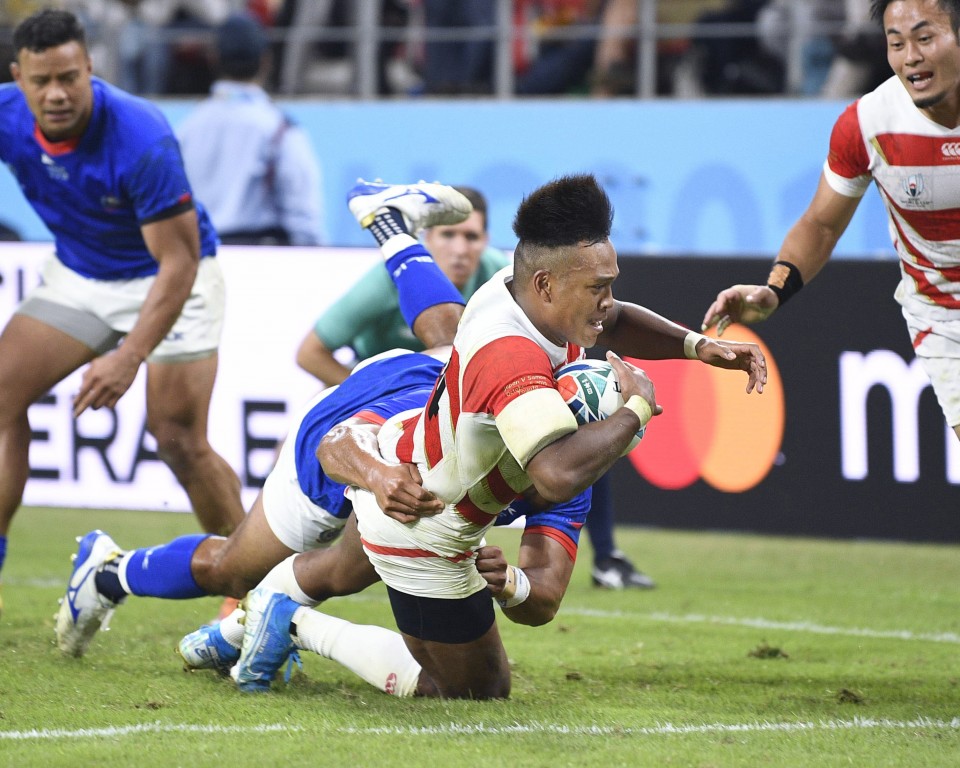 Fortunately on Saturday in Toyota, the much-improved Japan defense made sure the wayward kicks only resulted in one try to the Samoans, with locks Wimpie van der Walt and James Moore leading the way with 15 and 14 tackles, respectively.

As game captain Pieter Labuschagne commented after the game, it really was a team effort -- a team that has real self-belief and whose feet remain grounded despite the hype surrounding them.

Rugby: Japan close in on q'finals with win over Samoa

"No one thought we could beat Ireland and now they think we can win every game we play. That's how silly it is," said Joseph.

Not that he was criticizing the support.

"The Japanese public are really behind the team. That's what we knew would happen if we gave them test matches," he said.

"It gives the players -- I don't know if there's one word for it -- but it makes us very proud. Playing for 125 million people, and most of them don't normally support rugby. And they are behind us."

It was a view backed up by the players, including Keita Inagaki. 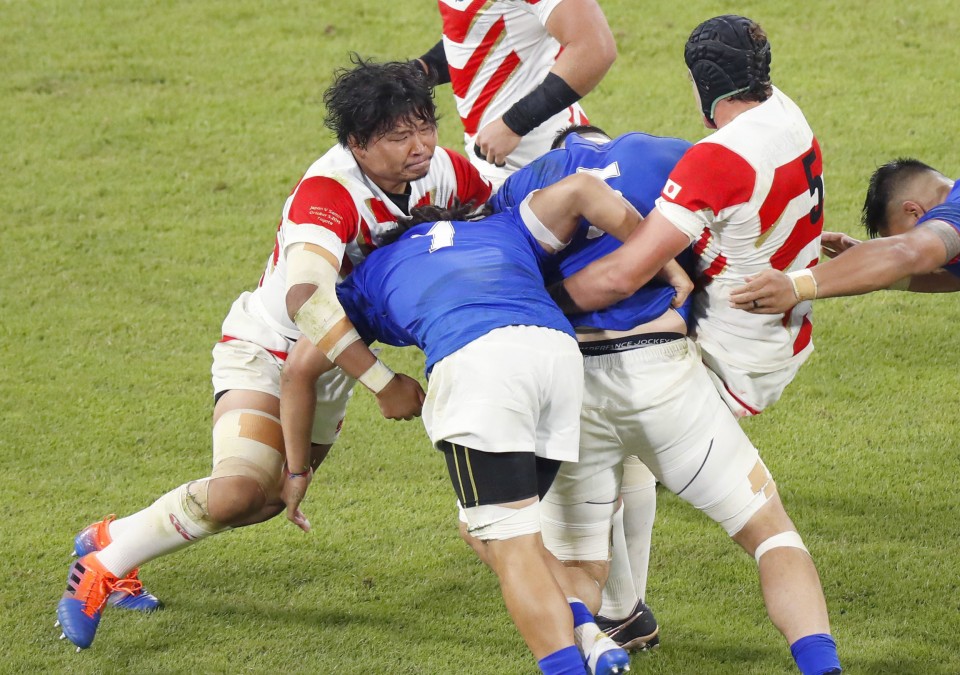 "The crowd's cheering helped us," he said. "I feel after each and every game the cheering and support from the fans has been empowering us."

Japan's cause, it has to be said, was also helped by some decisions that went in their favor.

Samoa's decision to go for a scrum on their own line in the dying minutes rather than a quick tap-and-go backfired big time and saw Japan eventually pick up a bonus point that could prove so crucial given how tight Pool A is.

While Jackson admitted the tackle was late, he was incensed at what he believed was a lack of consistency from the officials, after Tim Nanai-Williams was left concussed following a marginally late hit from Moore.

"I'm probably just as bewildered as most people" he said. "I agree TJ's (tackle) was late. But it was shoulder to the chest, then it is shoulder to the head (against Nanai-Williams) and we lose a player after the HIA. I don't take away anything from the Japan side but our players deserve better than that."

"Are the officials afraid to referee the game the way they see it? I think everybody here has seen it and seen the last few games -- you can play a game of poker with the amount of cards going around at the moment."

Fortunately, cards have not been an issue to Japan to date. And they will need more of the same discipline, or luck, next week as they look to beat Scotland for the first time ever in a full test match.

"Scotland are a very, very good team, with a lot of experience and a lot of X factor," Joseph said. "We saw how clinical they were beating Samoa last week. (It) was always going to come down to the final match if we did our job, and it's building up to be a real ripper."

"It's the first time Japan's ever got themselves in the position where they can top the pool, so it's new territory for us."

Hopefully for the home fans, Joseph still has a few tricks up his sleeve.