Typhoon threatens to disrupt public transport in Japan over weekend

Train operators and airlines said Thursday they are planning to or may suspend their services in eastern and western Japan this weekend, as a powerful typhoon is expected to hit the country.

East Japan Railway Co. said its bullet and local train services in eastern and northeastern Japan are expected to be halted on Saturday and Sunday, as Typhoon Hagibis is feared to make landfall in the Kinki region in western Japan during the two days.

The company said it will release more details on Friday, such as how long and what lines will be affected, in English, Chinese and Korean on its website and its Twitter account.

All Nippon Airways Co. and Japan Airlines Co. said they have canceled most of their flights in eastern and western Japan for Saturday. 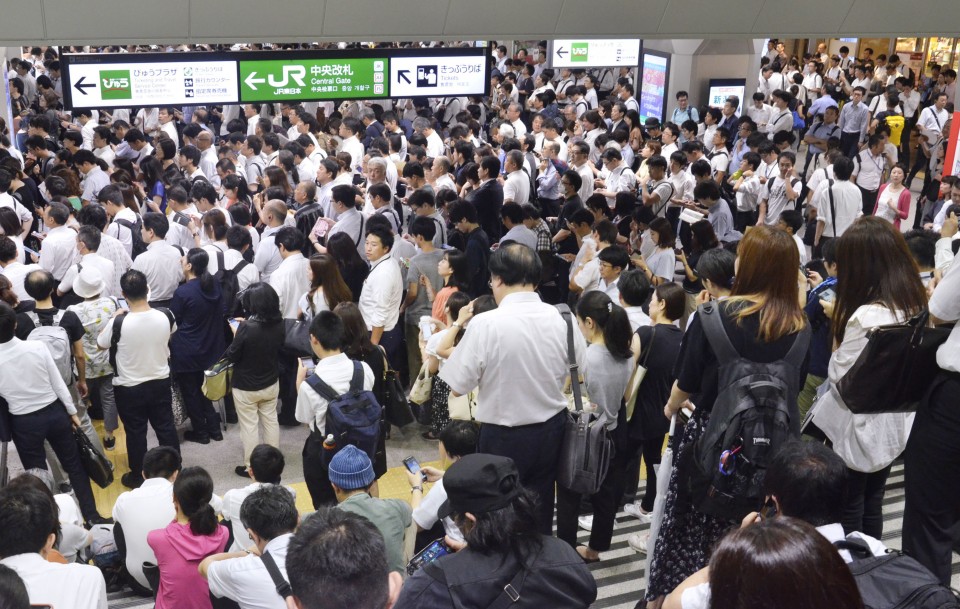 (Urawa Station in Saitama Prefecture is crowded on the morning of Sept. 9, 2019, in the wake of Typhoon Faxai, which landed near Tokyo, prompting East Japan Railway Co. to suspend all lines in the Tokyo metropolitan area.)

East Japan Railway decided to make the early announcement given that the typhoon is projected to coincide with Rugby World Cup games and many other events, including weddings and school sports festivals, planned over the three-day weekend through Monday, according to the officials.

On Thursday, Rugby World Cup's organizing committee said two pool matches scheduled for Saturday have been canceled due to the powerful typhoon.

They are a Pool B match between New Zealand and Italy in Toyota, central Japan, and a Pool C clash between England and France in Yokohama, near Tokyo.

As of 9 p.m., the season's 19th typhoon was traveling north-northwest, around 380 kilometers west-southwest of Chichijima Island in the Pacific off Tokyo at a speed of 20 km per hour.

It had an atmospheric pressure of 920 hectopascals at its center and was packing winds of up to 252 kph.

When a typhoon hit the metropolitan area in September last year, JR East announced a potential suspension of its schedule only eight hours beforehand, resulting in many people going to stations without knowing about possible cancellations.

Last month, it warned of a potential service suspension at noon on the day before Typhoon Faxai made landfall in Tokyo's neighboring Chiba Prefecture.

The subsequent disruptions affecting millions of commuters prompted the company to improve its website and response steps.