More than a third of female workers who were certified as having mental health issues cited some form of harassment as the main cause, a government survey showed Tuesday.

Some 36.3 percent of women with mental illnesses said that they suffered from sexual harassment, assault, bullying and abuse of power at work by superiors, according to a survey in a white paper on measures to prevent death from overwork.

About 22 percent of those female workers diagnosed with mental disorders said they experienced or observed a traumatic accident or disaster.

The survey also found about 23.1 percent of male workers with mental health issues citied "a change in their job role or workload" as the main cause, while 15.9 percent attributed the problem to assault, bullying and abuse of power. 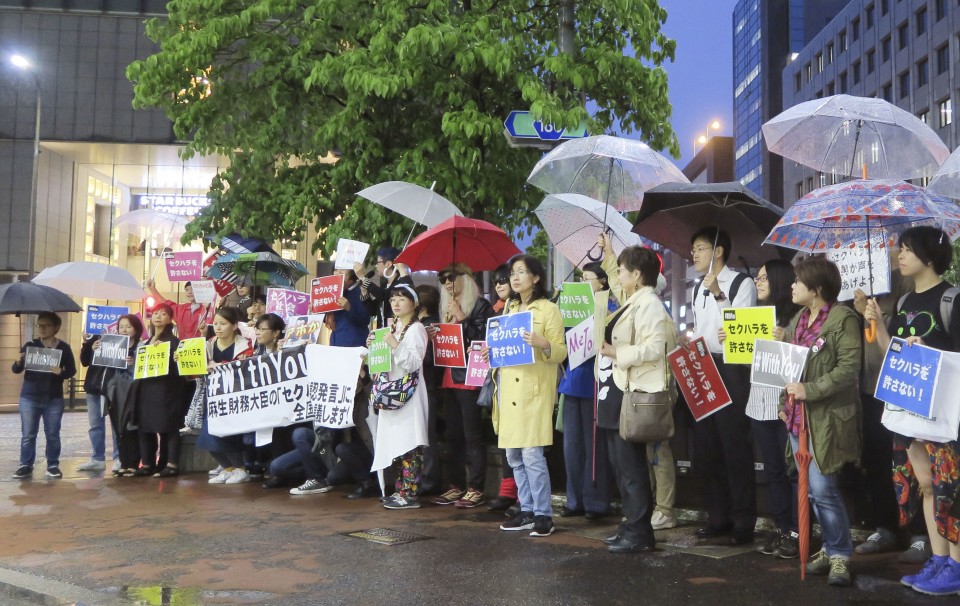 (Women took to the streets in Kyoto on May 7, 2018, in protest over Finance Minister Taro Aso's remarks taken to downplay alleged sexual harassment by a bureaucrat.)

The survey covers approximately 3,000 cases of persons certified as having a mental illness from January 2010 through March 2017, of which women accounted for 31.4 percent.

The survey, meanwhile, showed that the number of instances of mental illness and suicide as a result of overwork was the highest among office workers at 41 cases, followed by salespersons at 38 cases and drivers at 35.

The survey also analyzed working conditions in the construction and media sectors, notable for their long working hours, between January 2010 and March 2015.

There were 59 cases of mental illness among construction site supervisors. Of those, 30 committed suicide or attempted to do so.

Of suicides among those working in the media, all involved persons in their 20s.

Sexual harassment toward job-hunting students by alumni widespread in Japan