The Tokyo 2020 Paralympics are set to begin on Aug. 25, roughly two weeks after the close of Tokyo 2020 Olympics.

As the opening of the Paralympics nears, there are more instances of para athletes appearing in newspapers or on television, yet there is not as much interest in the event as the Olympics.

In para sports, there tends to be an emphasis placed on the impairments that the athletes have to deal with, but top para athletes are high-level competitors who are as, if not more, impressive to watch than their able-bodied equivalents.

Both able-bodied athletes and para athletes push themselves to their limit and strive to be the best, there is no difference in mindset on display.

Tomohiro Ueyama, who will be competing in para archery at the Tokyo Paralympics, is much in demand in the media. The 32-year-old began archery at Doshisha University and after graduating became a para athlete after losing the use of his lower limbs.

Ueyama specializes in recurve, aiming to hit the target's bull's-eye from 70 meters. He placed seventh at the 2016 Rio de Janeiro Paralympics and is aiming "to win gold in front of a full house" next year in Tokyo. 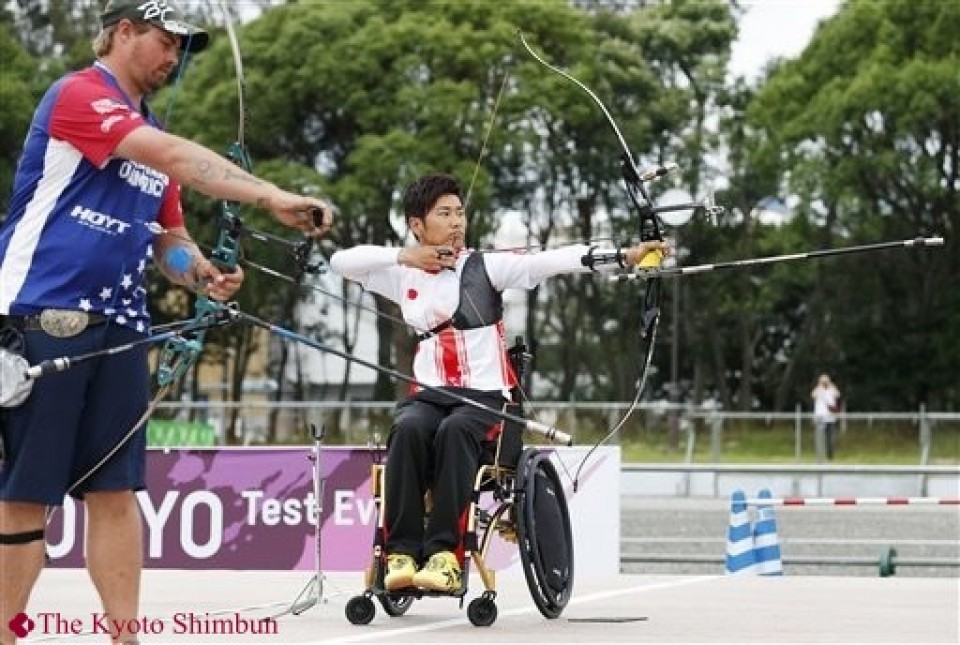 In July, a test event was held at the venue where the sport will be staged at the Tokyo Paralympics.

Since there are few differences in the rules between archery and para archery, both Olympics and Paralympics test events were held at the venue at the same time and a close contest between Ueyama and Rio Olympic bronze medalist Brady Ellison garnered attention.

The barriers between para sports and regular sports are becoming lower. In 2012, South African sprinter Oscar Pistorious, who has prosthetic legs, competed in both the London Olympics and Paralympics.

Long jumper Markus Rehm, a German amputee and Paralympian, has jumped over eight meters, an impressive feat even for an able-bodied top-class athlete.

Even so, there is a different degree of enthusiasm between the Olympics and Paralympics. Paralympics organizers are aiming for "full stadiums" but while the website for the first round lottery for Paralympics tickets had about 1.35 million hits, that figure was well below the 24.25 million hits for Olympic tickets

Para athletes have physical limitations that mean they strive for different goals than able-bodied athletes. But every para athlete I have covered puts the same effort and has the same unrelenting attitude as they pursue their goals.

As a sport to watch, the wheelchair "ekiden" relay race every year in Kyoto provides an opportunity for athletes to show off their great power and chair-handling skills, and is really worth seeing.

A para sport that requires a high level of strategy, boccia, in which Japan won the silver medal at the Rio Paralympics, has endless appeal.
At the Tokyo Paralympics, 540 events will be held in 22 competitions. The number of events is more than the Olympics and that means more highlights to look forward to.

It is 56 years since the 1964 Tokyo Games, when the Paralympics was first named as such.

At the second Paralympics to be held in Tokyo, 4,400 Paralympians, the largest ever contingent, will gather to compete and I hope their world-class performances will get the attention they deserve.