Rallies held in Hong Kong after teen shot by police

Rallies were held in Hong Kong on Wednesday in protest over the shooting of an 18-year-old high school student by police during a clash the previous day.

The male teenager, who was critically wounded after being shot in the chest by a riot police officer at close proximity, was in stable condition Wednesday following surgery, according to local media.

It is the first case of a protester being shot with live ammunition since demonstrations erupted in the territory in June over a now-abandoned extradition bill. 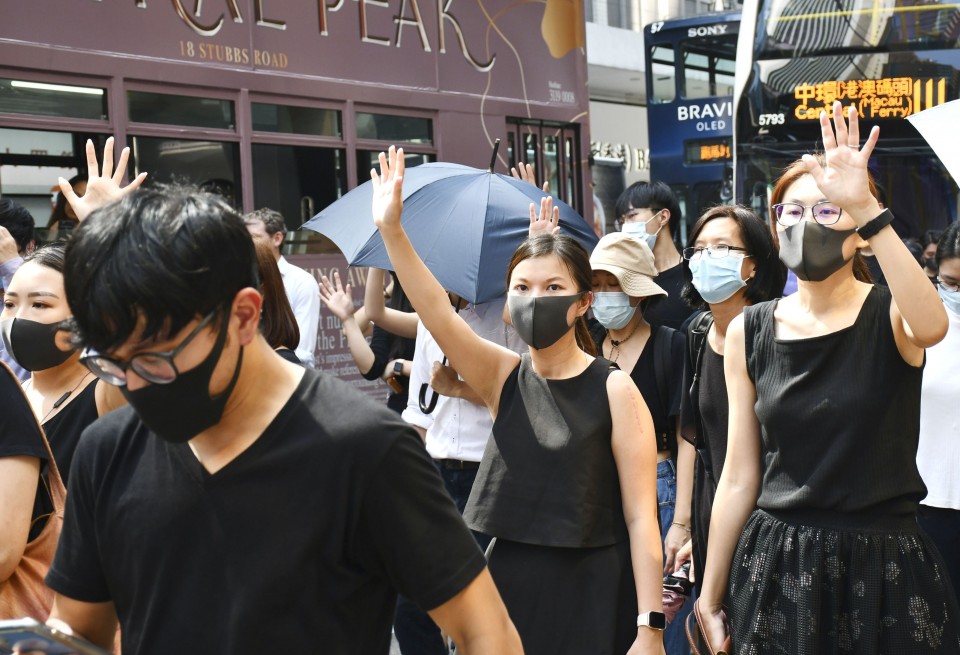 The student, a seasoned protester, was shot in the afternoon during a clash in Tsuen Wan in the New Territories, according to local media. Footage uploaded online showed him wielding a metal rod among a group of protesters when a police officer standing at arm's length fired a single pistol shot.

The government on Wednesday condemned the "rioters for their extreme and violent acts" the previous day, saying such acts pose a serious threat to the safety of members of the public and seriously undermine social order.

The clashes between the protesters and police overshadowed China's 70th anniversary celebrations of the founding of its Communist regime.

At the wounded teenager's school in Tsuen Wan, students and alumni were among participants at a protest rally held in the morning. 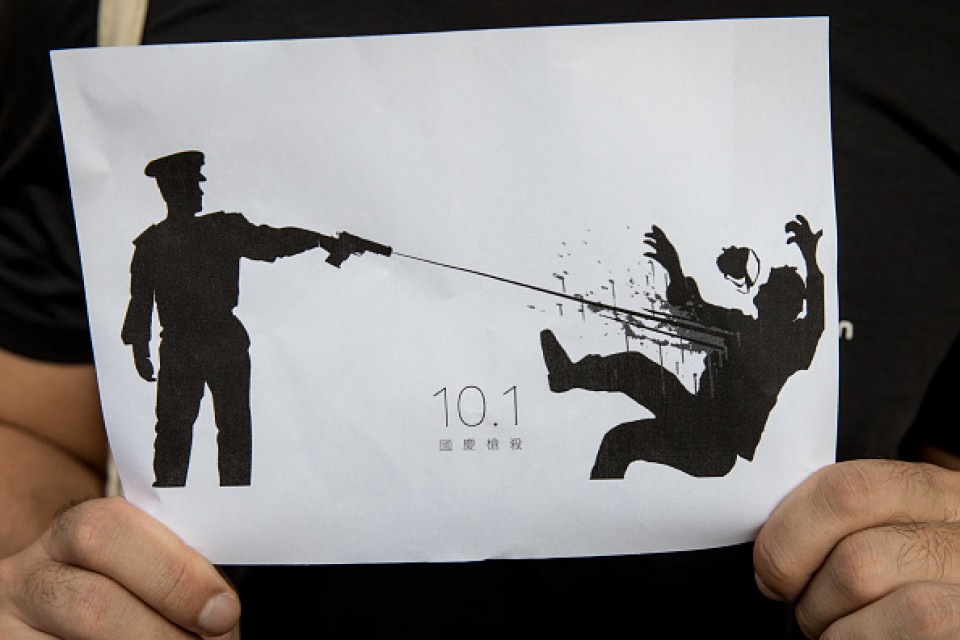 (A man holds a sign depicting the shooting of a protester by a policeman during the Oct. 1 protests, during a solidarity rally outside the Tsuen Wan Public Ho Chuen Yiu Memorial College on Oct. 2, 2019 in Hong Kong.)[Getty/Kyodo]

Elsewhere, hundreds of students from a handful of high schools skipped classes to gather at the West Kowloon Magistracy, where 96 protesters who were charged with rioting in connection with a protest on Sunday faced trial.

At lunch time, more than 2,000 people took to the streets in the Central business district and later in Admiralty near the government headquarters in protest.

"Police violence escalated again (Tuesday)," said Nero Ng, 24, in Central. "We are helpless, we don't know what we can do for the youth who was shot. How the situation develops is worrying."

Branson, a 58-year-old law firm employee who wished to be identified by his first name only, said the government must act. "It is difficult for sure, but the government has to show us it is at least trying," he said. 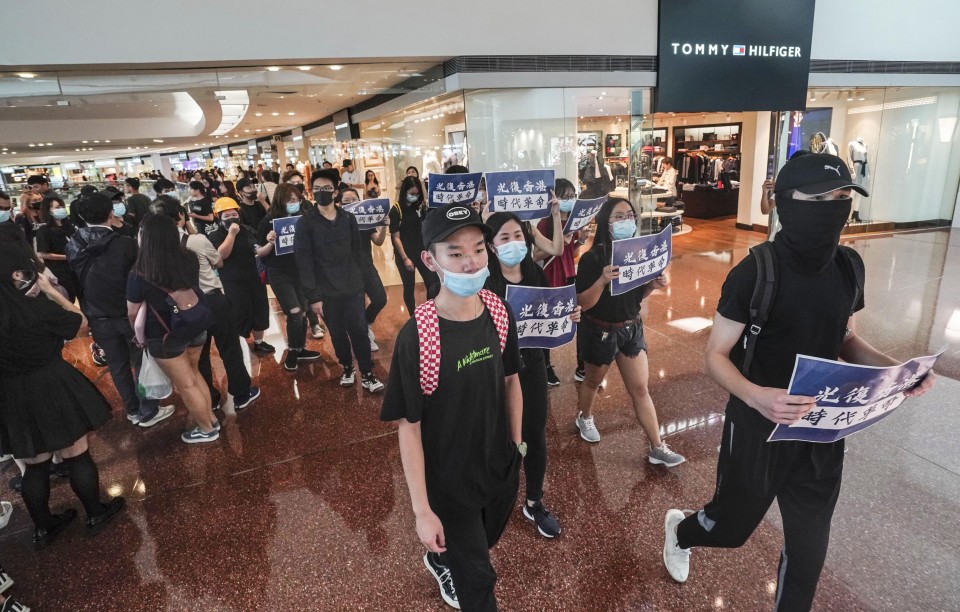 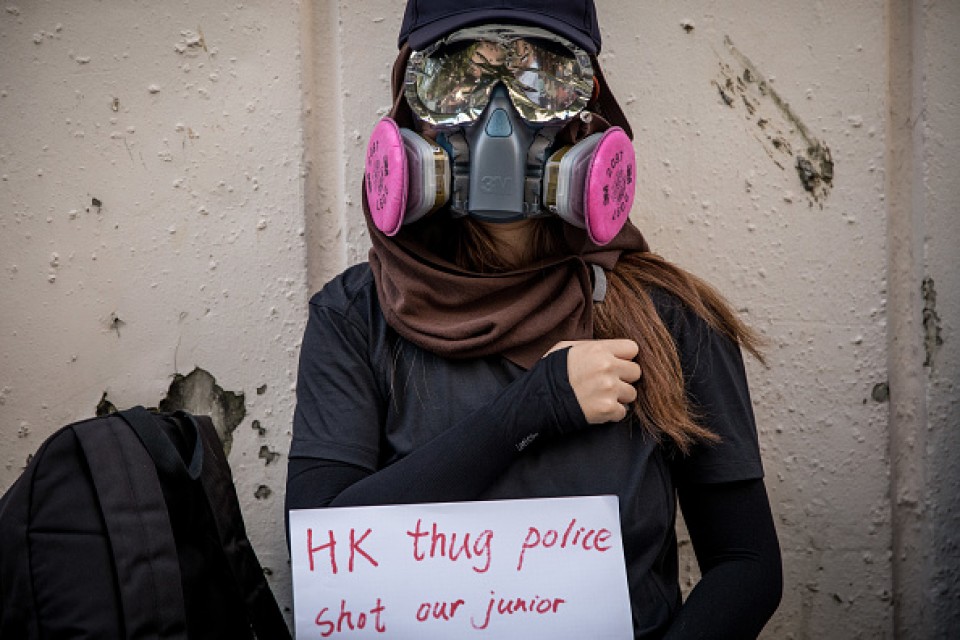 He supported the establishment of an independent probe into alleged police violence, one of the demands of the protesters, despite concerns it may impact police morale. "The police have lost their credibility in society anyway," he said.

By nightfall, rallies continued in several other districts, including Causeway Bay, Wong Tai Sin and Tsuen Wan, where protesters set up roadblocks to disrupt traffic and damaged shops run by mainland Chinese companies.

Responding to questions about the shooting at a news briefing, Deputy Police Commissioner Tang Ping-keung said there is no standing order of shoot to kill.

"We don't want to kill anybody, but When our lives are threatened and left with no choices, we have to use appropriate force (that may involve the) use of firearms," Tang said.

He claimed that officers were being chased and under attack by rioters wielding metal rods and that when one of them fell on the ground, another officer who went to his rescue opened fire at the masked teenager. 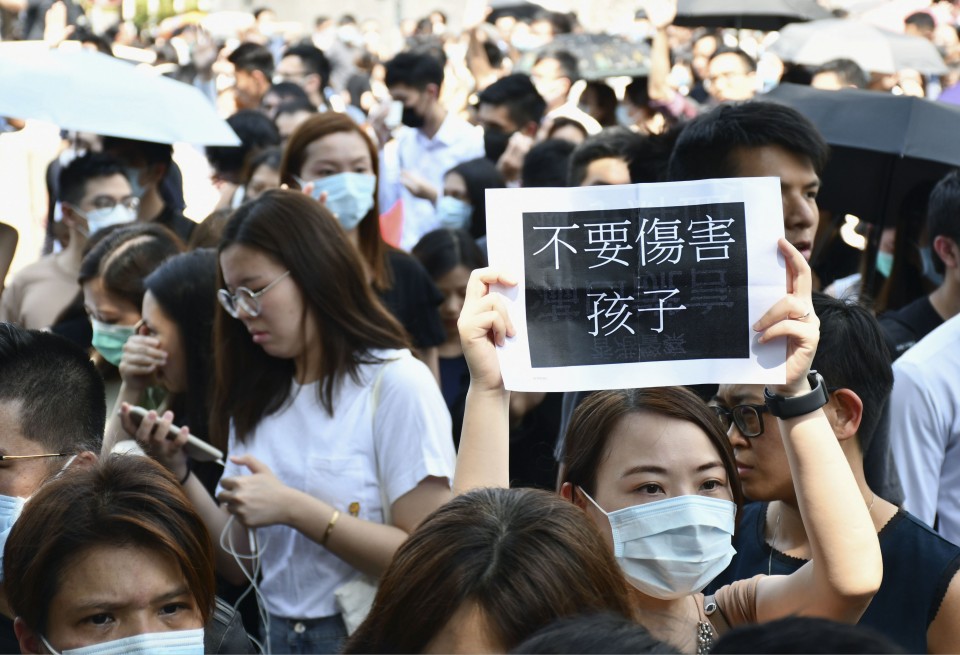 Tang confirmed that he was arrested for unlawful assembly and assaulting a police officer.

Hong Kong's police chief Stephen Lo said late Tuesday that the officer who opened fire acted in self defense and in accordance with the police code.

A total of 269 people were arrested on Tuesday alone, aged between 12 and 71, including 93 students, police records show.

Six live rounds were fired on three occasions, including the one where the protester was shot. More than 1,400 teargas canisters were also launched, in addition to 900 rubber bullets, 190 beanbag rounds and 230 sponge grenades.

The protesters' demands have widened to include an independent inquiry into police use of violent tactics against protesters, pardons for all those arrested and democratic reform.