Ireland booked their place in the Rugby World Cup quarterfinals in emphatic fashion Saturday, routing Samoa 47-5 despite playing more than half the match with 14 men.

Coach Joe Schmidt's side went a man down in the 28th minute at Fukuoka Hakatanomori Stadium (Level 5 Stadium) when inside center Bundee Aki became the first Irish player sent off at a World Cup for a dangerous high tackle on Samoa flyhalf Ulupano Seuteni. 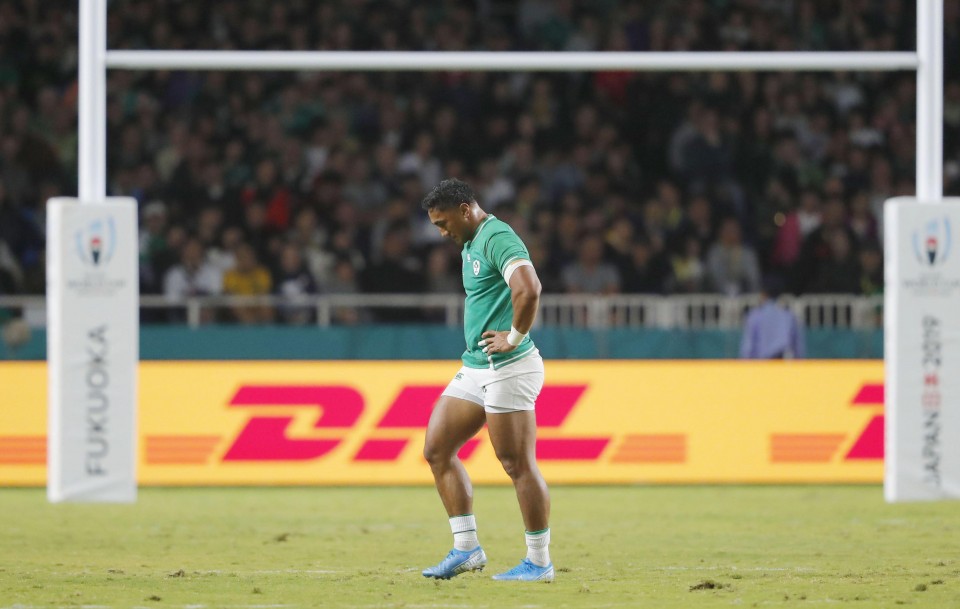 (Bundee Aki is given his marching orders)

The seven tries to one bonus-point win moves the Irish to the top of Pool A and raises the stakes for Japan in their crucial showdown with Scotland on Sunday.

Should the match go ahead in the wake of powerful Typhoon Hagibis -- which lashed Japan's main island of Honshu on Saturday -- the hosts must avoid relinquishing their current four-point buffer over the Scots, who they have never beaten.

Ireland will learn whether they will face New Zealand or South Africa in the quarterfinals following the outcome of the match between Japan and Scotland.

Captain Rory Best said the Irish had regrouped following their 19-12 upset loss to Japan on Sept. 28 and were determined to advance from the pool with victory over Samoa.

"After the Japan game, we knew that 10 points would get us through. The boys rolled up their sleeves," the 37-year-old hooker said.

"We knew that Samoa would come with no pressure on their shoulders, they would come at us in attack and defense. At times, it maybe wasn't that pretty, but (it was) very effective."

With two other matches already canceled, the typhoon largely spared the southwestern main island of Kyushu on Saturday, allowing Ireland and Samoa to take the field in gusty conditions. 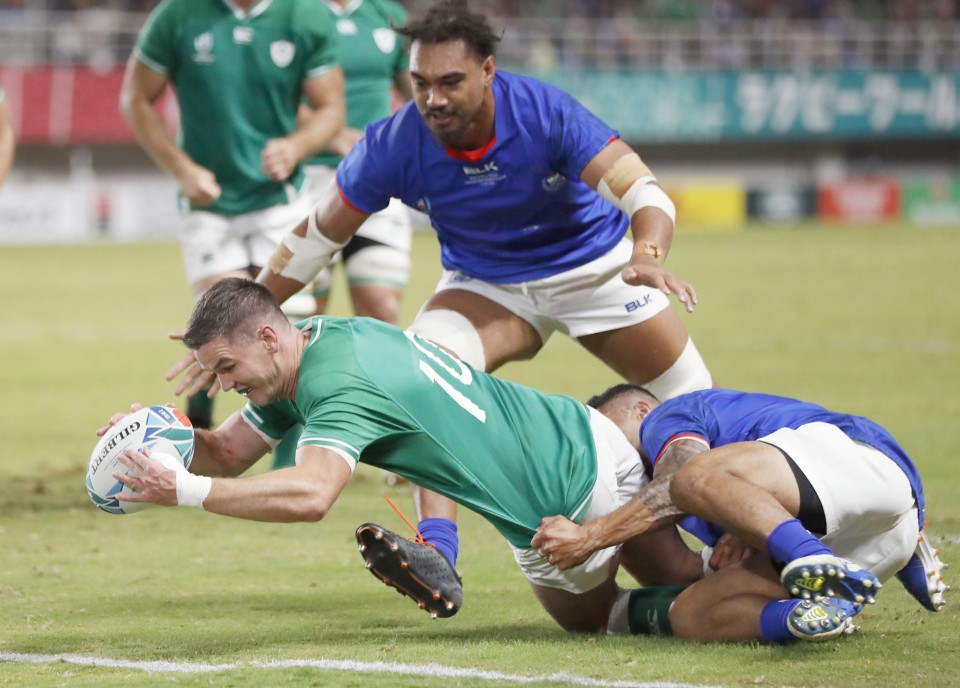 Ireland wasted little time in seizing control of the contest, crossing for three tries in the first 20 minutes, then adding the all-important fourth shortly before halftime.

Despite the wind, both teams went to the air early, with Ireland scrumhalf Conor Murray trading kicks with Samoa fullback Tim Nanai-Williams.

Ireland took just three minutes to cross for their first try, getting the driving mall going from a five-meter scrum before Best powered over the line.

The Six Nations side gained a man advantage when Australian referee Nic Berry sent Samoa hooker Seilala Lam to the sin bin for a dangerous tackle on Jacob Stockdale.

They quickly capitalized on the numerical superiority, with prop Tadhg Furlong bursting through four tackles and crashing over the line.

With the men in green continuing to dominate territory, flyhalf Johnny Sexton crossed in the 20th minute, then kicked his third conversion for a 21-0 lead.

Manu Samoa answered through their forwards in the 25th minute, with captain Jack Lam scoring the try after the pack drove their way across.

The Irish soon found themselves a man down, with Berry issuing the red card to Aki after the center led with his shoulder and made contact with the face of Seuteni, who was replaced following the concussion protocol.

Coach Vaeluaga Steve Jackson's team were unable to gain any advantage, however, and it was Ireland who looked like the team with the extra man as Sexton crossed again to take his side into halftime with the bonus point and a 26-5 lead.

Ireland seemingly put the result beyond doubt in the 47th minute with a try to man-of-the-match Jordan Larmour, and they continued to dominate against an increasingly demoralized Samoa.

With the Irish fans in full-throated song, the world No. 4 team added tries through CJ Stander and Andrew Conway, stretching the lead to 47-5 following back-to-back conversions from replacement Joey Carbery.

In his post-match comments, Jackson said there was "no malice" in Aki's hit on Seuteni, saying he hoped there would be no suspension for the 29-year-old center, who was born in New Zealand and is of Samoan descent.

"If you look at Bundee's tackle again...I think he only had about two or three meters to make a decision on what sort of tackle type to make," Jackson said. "We all know it's extremely difficult."