Fans who have come to Japan for the Rugby World Cup are traveling beyond cities hosting the matches during their stays, be it to Mt. Fuji, temples in Kyoto or the Hiroshima peace memorial, to take in a myriad sights across the nation.

The inbound rugby fans, whom organizers predict to top 400,000 at the six-week tournament, are enjoying the hosts' hospitality and savoring beers and local cuisines, while Japanese retail and tourism industries try to woo such long-stay, generous spenders.

Jon Moore and his wife Cindy said they came to Japan for two weeks to watch Wales play Georgia in Aichi Prefecture in central Japan, France and the United States in Fukuoka in southwestern Japan and South Africa and Italy in Shizuoka Prefecture, in central Japan.

The Moores, from Springfield, Missouri in the United States, were visiting Japan for the first time. 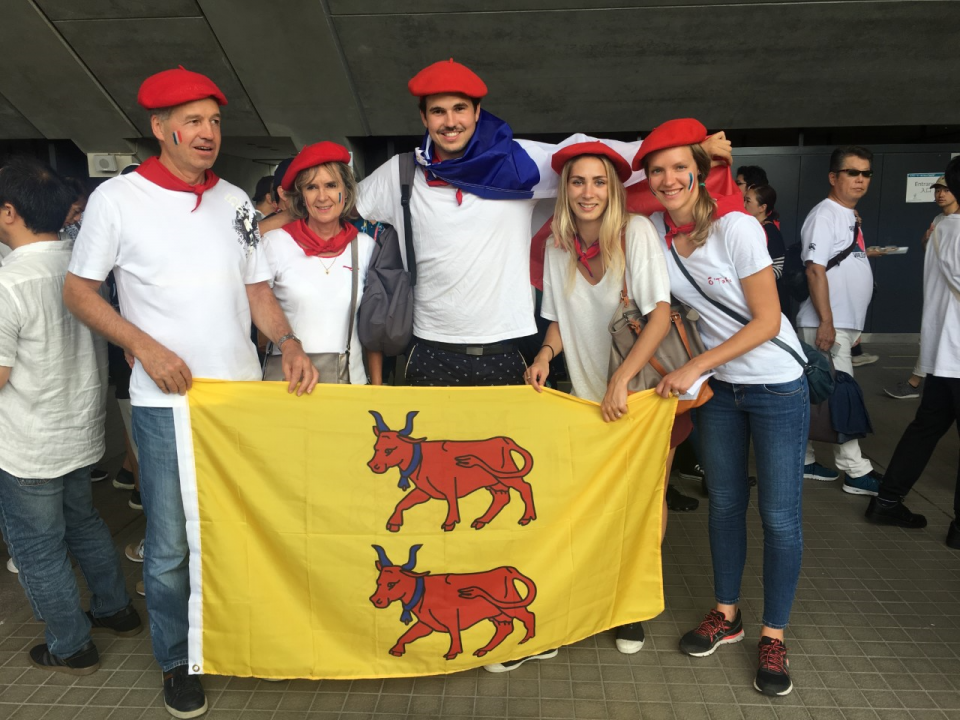 (Laure Maysonnave, right, and family at Kumamoto Stadium to support France against Tonga. They are holding the the Bearnese flag, which represent the southwestern France region in which their hometown, Pau, is located.)

"Everyone has been awesome. Not even understanding English, they have helped us as much as they possibly could. And everything is so clean and nice. So we would like the country to know, we're very proud of you guys and that you've done well," Cindy said ahead of the France-U.S. clash in Fukuoka.

"The noodles have been awesome and the tempura, the shrimp and the vegetables, I just loved," she said. The couple also stopped at Kanazawa on the Sea of Japan coast, popular for its centuries-old samurai residences and home to one of the most famous gardens.

The pair said they are celebrating their wedding anniversary by coming to the World Cup, having been to the Wales, England, France and New Zealand tournaments and plan to go to France in 2023.

Being well acquainted with rugby's beer-drinking culture, Jon tipped his hat to the brews he has tried in Japan.

"Here (the Japanese beer is) a lot better (than American beer.) We'll be looking those up at the liquor store when we get back," Jon said.

Since the tournament kicked off three weeks ago on Sept. 20, rugby fans have been seen drinking before and after games at Japanese-style izakaya restaurants and buying canned beers in bulk at supermarkets and convenience stores.

At stadiums, fans queued at stands for beer or bought it from "uriko," the Japanese word for beer vendors that walk up and down the stands carrying kegs on their backs.

"Usually at pro baseball games, I sell 150 cups of beer but today I sold like 250 cups," said a 19-year-old uriko at Sapporo Dome on Sept. 22 for the England-Tonga match. She is among a total of 1,650 uriko organizers have deployed across tournament venues.

"I had heard of the reputation that foreign rugby fans drink lots of beer but I am amazed at how much they actually do," said a spokesman for Japanese beverage maker Kirin Brewery Co., which handles products for RWC official beer sponsor Heineken in Japan.

"It's also interesting how they would purchase several 500-milliliter cans at one time while an average Japanese person would start with one 350-ml can," he said.

Estelle Dupin, a 40-year-old nurse from France, said she is staying in Japan for a month through Oct. 15 with her husband Fabian, 41, her husband's brother and her sister-in-law, to watch four games.

In between matches, they traveled to Osaka, Kobe, Kyoto, stayed at a temple in Mt. Koya and walked the pilgrimage path for about four hours before making trips to Hiroshima, Fukuoka and Kumamoto.

"The Hiroshima Peace Memorial Museum was extraordinary. It was very sad but extremely important," Dupin said.

"The people in Japan are very welcoming. Very, very, very helpful," she said. "The Japanese are usually very quiet and don't get excited. But the people (at the games) are very excited and happy to see us."

In Kumamoto, Laure Maysonnave, from Pau, in southwestern France, said she came for two weeks in Japan with her sister, brother and parents. The five, who were in Kumamoto to watch France take on Tonga, also planned to visit Kyoto and Hiroshima before traveling to Tokyo and Yokohama. 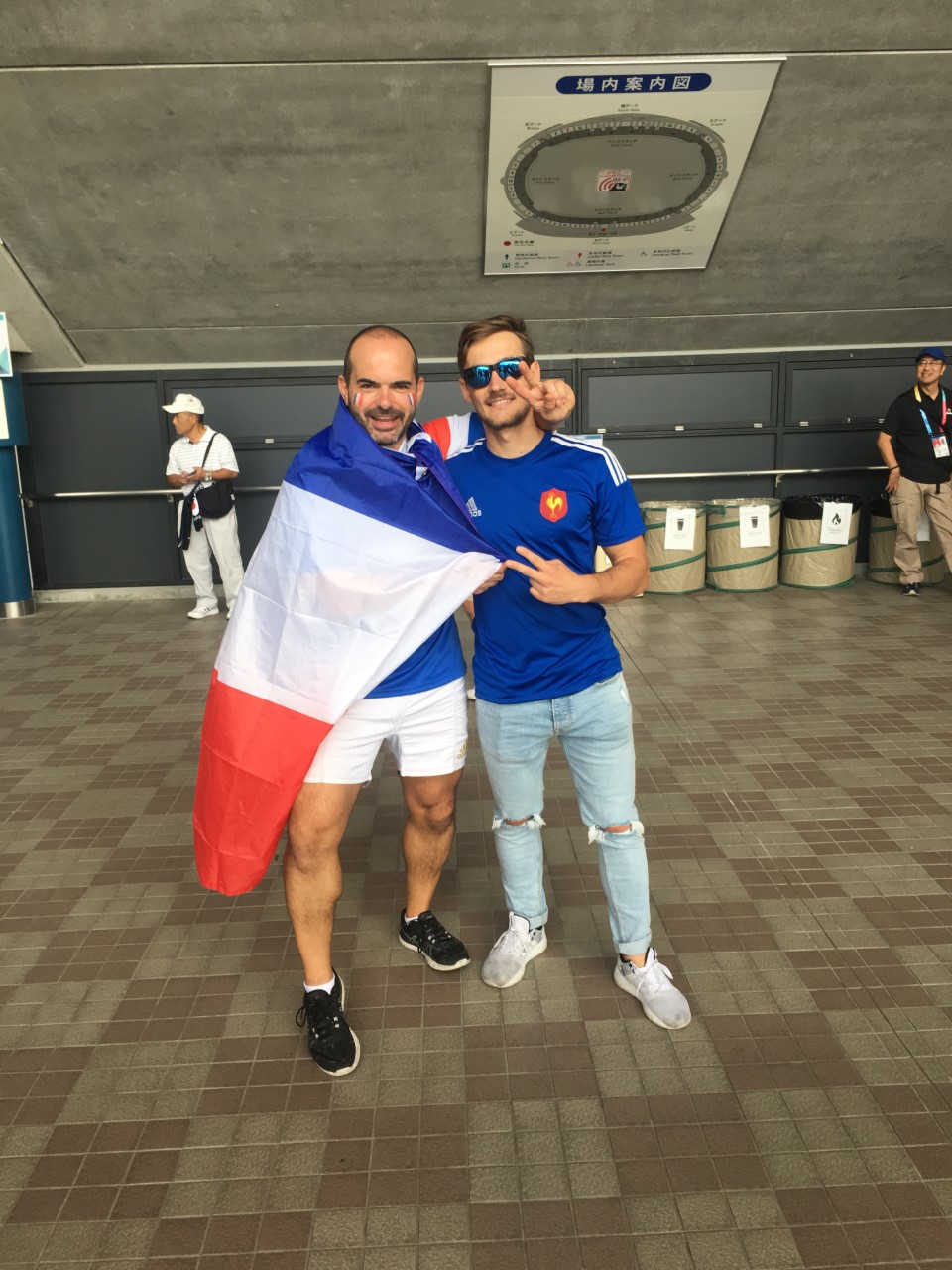 Maysonnave said the family had enjoyed sampling different types of Japanese cuisine, but were particularly impressed with the hospitality they had received from ordinary people.

"We love Japan, it's wonderful," she said. "Japanese people are so sweet. Everyone we have met has been so nice and helpful. We have also noticed Japanese people always seem to be on time!"

Some foreign fans took the time to learn about Japanese rugby and its roots. At a fan zone in Kobe, they were introduced to the western Japan city's place in the sport by checking out an exhibition introducing late Seiji Hirao, known in the country as "Mr. Rugby."

Toby Shannan, 50, and Sean Kennedy 51, from Perth, Canada, have traveled to Japan for eight days to watch six games. "It's interesting how charismatic and handsome and what a leader (Hirao) was, he must've been interesting," Shannan said.

"I've been to a World Cup before, and they are amazing. You have people from all around the world, and great sportsmanship -- it's like a big party," Shannan said.

Rugby World Cup organizers said in their report released in March 2018 that the tournament will bring in 437.2 billion yen ($4 billion) in economic benefits thanks to sales of tickets and goods and spending by the up to 400,000 expected foreign visitors.

The official Megastore selling World Cup gifts and apparel for men, women and children have also seen foreign fans binge buying. A vendor at the store in Shinjuku in Tokyo said foreign tourists usually pay tens of thousands of yen to purchase items on one visit.

The World Cup matches have been held at 12 venues around Japan from Hokkaido in the north to the Kyushu region in southwestern Japan.