Basketball: There are regrets, but no apology: NBA's Adam Silver

NBA Commissioner Adam Silver said Tuesday that he regrets that so many people in China have been upset by Houston Rockets' General Manager Daryl Morey's pro-Hong Kong tweet, but he is not apologizing.

Silver, speaking at Saitama Super Arena before an NBA preseason game between the Rockets and NBA champion Toronto Raptors, said he wanted to clear up some misunderstandings about his organization's position.

"We are not apologizing for Daryl exercising his freedom of expression," said Silver, reiterating what he told Kyodo News a day earlier. "I regret, having communicated directly with many friends in China, that so many people are upset, including millions and millions of our fans."

He said that the issue is causing disruption in people's lives and causing disharmony is "something that I regret."

While in Tokyo with the Rockets, Morey posted in a now-deleted tweet an image with the words "Fight For Freedom. Stand With Hong Kong," sparking a wave of online criticism, much of it from China where now-retired Chinese hall of famer Yao Ming -- a former Rocket -- is a larger-than-life figure. 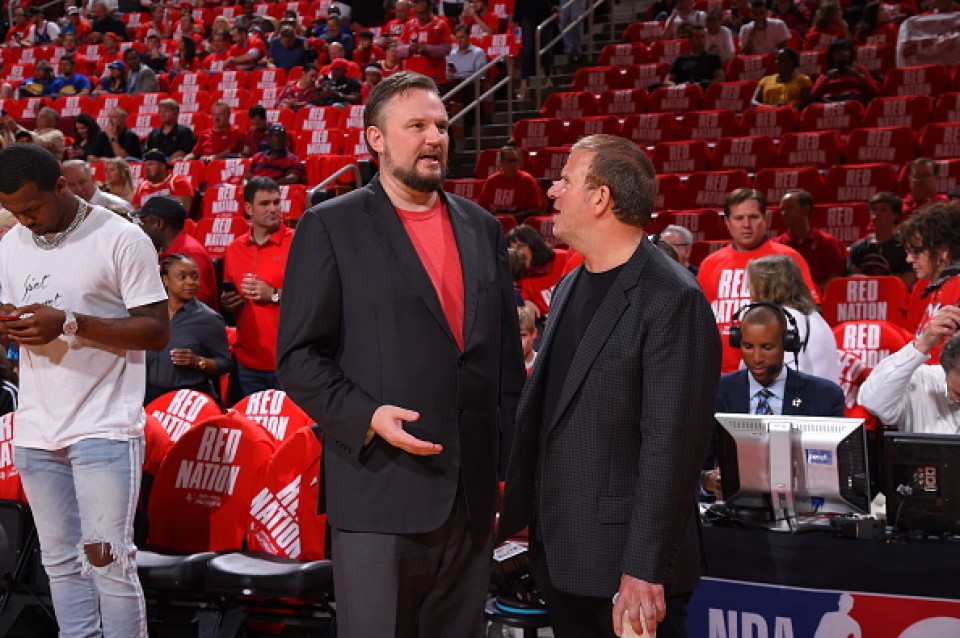 (Houston Rockets General Manager Daryl Morey and Houston Rockets owner Tilman Fertitta speak during Game Four of the Western Conference Semifinals of the 2019 NBA Playoffs on May 6, 2019 at the Toyota Center in Houston, Texas)[NBAE/Getty/Kyodo]

Silver said that his close friend Yao "is extremely hot at the moment."

"There is no question that Daryl's tweet has hit what I would describe as a third-rail issue in China. I think Yao is extremely unsettled and I am not sure he quite accepts how we are operating our business right now. And again, I accept that we have a difference of opinion."

He also addressed Chinese broadcaster CCTV's decision, because of his remarks supporting Morey, to not air the Los Angeles Lakers-Brooklyn Nets preseason games to be played in Shanghai and Shenzhen.

"It is not something that we expected to happen. I think it is unfortunate but...that is the consequence of us adhering to our values -- we still think it is critically important that we adhere to those values."

Silver will still travel to China on Wednesday as planned, but his trip has gone from promotion to peacekeeping.

"It is my hope that when I am in Shanghai I can meet with the appropriate officials and discuss where we stand."

"And again, put those remarks from Daryl Morey and my remarks in appropriate context of a many decades-long relationship and see if we can find mutual respect for each other's political systems and beliefs."

Silver said he is not headed to China as either "the commissioner of the NBA or an American to tell others how they should run their governments" but simply to reiterate the "values that are deeply rooted in the DNA of the NBA."

After the game, which the Raptors won 134-129, Houston coach Mike D'Antoni would not be drawn on the controversy, saying, "I am here to play basketball, to coach basketball and that is what we did tonight and what I am going to comment on."

Raptors coach Nick Nurse did not say much more.

"I have a lot of faith in the leadership of the NBA that they know what they are doing and how to take care of these matters," the championship-winning coach said.

James Harden, the league's Most Valuable Player in 2018, said the whole controversy has not been a distraction.

"We are focusing on our team and getting better. We have a great opportunity ahead of us...Our sole focus is on the Rockets and how we can get better every day."