Yes, we are all aware of how MAN WITH A MISSION guitarist Jean-Ken Johnny could occasionally spill the beans about the band’s dubious half-wolf identities on stage ("You can take pictures now that we have towels around our mouths so you can't see what's underneath -- well, scratch that, there’s nothing underneath.").

Generally speaking though, Japanese rockers MAN WITH A MISSION (usually abbreviated as "MWAM") have been keeping their image rather mysterious with the backstory that they’ve been sticking to of how a Dr. Jimi Hendrix (apparently, not the one that you are thinking) created them for evil purposes but then regretted it and froze them under the glaciers of Antarctica.

"How's life being half-wolf, half-human?" I asked guitarist Johnny prior to the band’s show at Gramercy Theatre in New York in September, hoping my voice sounded sincere enough.

"It’s good in a way," he replied, seemingly amused. "But sucks sometimes, just like you humans."

Johnny told me that when it comes to dating, he only goes out with human females instead of wolf females, for an obvious reason -- he’s only wolf from the neck up with human physiological structure for everything down below.

Everything else in his life was quite normal too, just like a human. And no, he does not use special shampoo for fluffy animals.

MWAM has managed very well indeed to keep their fans curious and not just about their intriguing myths as sophisticated wolves, but also with their new music and its passion-sparkling elements.

The band hasn’t been on a songwriting spree this past year though. Their latest single, "Remember Me," was the band’s first release in fourteen months, and thus gained buzz immediately.

Topping both Billboard Japan and Oricon charts, "Remember Me" was also the theme song for "Radiation House," a popular Fuji TV series adapted from a manga of the same name.

Johnny told me that the author of the original manga, Mori Taishi, turned out to be a big fan of MWAM and even drew a whole story based on the band.  They met with Taishi about a year ago, one thing led to another and the song was featured on a national TV drama.

Since "Remember Me" dropped with three B-side tracks, which made the single almost look like an EP, naturally fans assumed an album might be on the way, while the band was rather noncommittal.

"We did a whole bunch of overseas shows this year. We went to East Asia, Europe, and now North America.  We are even hitting Australia soon for the first time. We enjoyed seeing people go crazy for our music, and for now we are really just hoping to bring our music to more places."

On the other hand, Johnny admitted that they did record some other songs.

"We are not focusing on making a new album, but we kept recording new things. Maybe one day we’ll suddenly realize, 'Hey, we've got fifty songs at our hands and let's make an album out of it.’  Who knows." 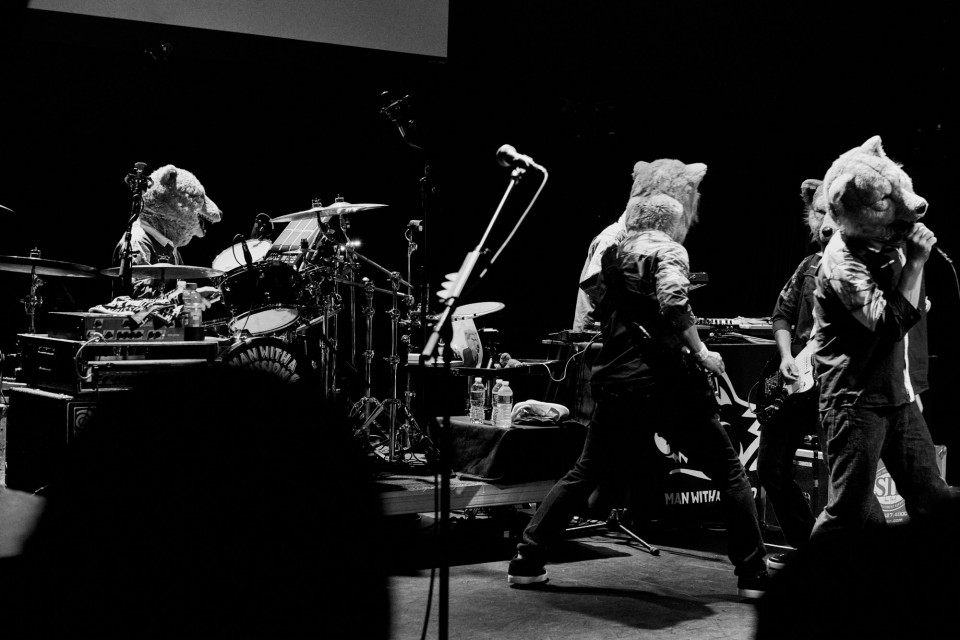 The aesthetics of MWAM cinematography has always been widely acclaimed, and Johnny couldn’t hide his excitement when we talked about how many people learned about the band through YouTube and anime.

"Most fans who came to our shows were seeing us for the first time," he chuckled. "That means new people are discovering us, especially from outside of Japan."

The music video for their 2018 single "Take Me Under" was doing especially well with its "pigs the rulers, wolves the slaves" plot. The setting was daring and symbolic, with the pigs and wolves apparent metaphors. Fans were fascinated by the storyline and even jokingly asked whether those downvotes were from the pigs.

"Many think they are not treated right in this world and can't speak up, but they are just stuck in their own worlds who simply need a little push.  That’s really all it's about, but of course, people can have their own interpretations," said Johnny, shrugging his shoulders. 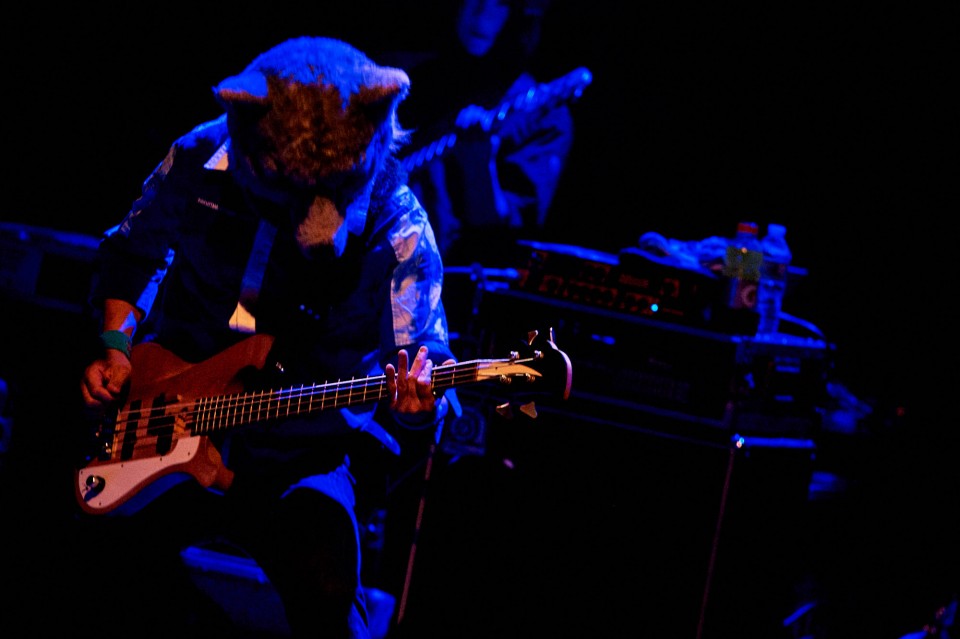 Taking influences from the early alternative rock flourish in the nineties as well as the later nu-metal / emo hype in the noughties, MWAM achieved huge success in Japan and that has brought them brilliant opportunities to befriend and work with their childhood guitar heroes.

From Sid Wilson from Slipknot to Patrick Stump from Fall Out Boy, the list of renowned artists with whom MWAM have collaborated goes on and on to the point that these five half-wolves almost became some sort of respectful mascots of the modern Japanese rock scene.

Speaking of his experience hanging out with these musicians, Johnny shared some hilarious moments.

"Dave Grohl made me dance in front of fifty thousand people."

I could hear the bitterness in Johnny's voice as he recalled the incident, although it sounded hysterically funny to me.

"Then it was decided that they would call my name and I’d come on stage and say, 'Hi.' But I guess Dave forgot my name later because he just waved his arms at me and was like, 'Hey you! Come on up and dance!' What could I have done? A random drunk punk walked crookedly onto the stage -- that’s what those fifty thousand people saw on that day."

Through their friendship with Sid Wilson, MWAM got a chance to tour with Corey Taylor and the latter’s side project Stone Sour in 2017.

At a house party hosted by Taylor where the notorious metalhead singer served lasagna, Johnny unfortunately caught the eye of Taylor's fourteen-year-old son, which was only inevitable.

"There were so many guests…almost all musicians, and he somehow picked me. The kid said, 'I make music too and let me show you what I wrote!' and started playing some rhythms. It was so noisy there that I couldn’t hear anything!"

"And you know the thing is, it would've made a lot more sense if he was playing an acoustic guitar or whatever, but no, what he was playing was an unplugged electric bass." Johnny shook his head.

"So I just stood there helplessly, and pretended that I listened carefully to the whole thing. A talented kid he is though. Just like his dad."

Considering all these encounters and interactions with some of the world’s best musicians, Johnny’s reaction was oh so lovely when he was asked which up-and-coming artist he would like to collaborate with.

"There is one but I don’t know if that’s gonna happen." He even sounded a little shy.

"Billie Eilish…I think. She is so cool and awesome," said Johnny lowering his wolf head like an embarrassed middle school boy.

It was hard to imagine this would be the same guy who howled, "Welcome to the ZOOOOO!" on the stage of Gramercy Theatre a few hours after this interview but, I guess, every wolf has their own sweet spot, too. 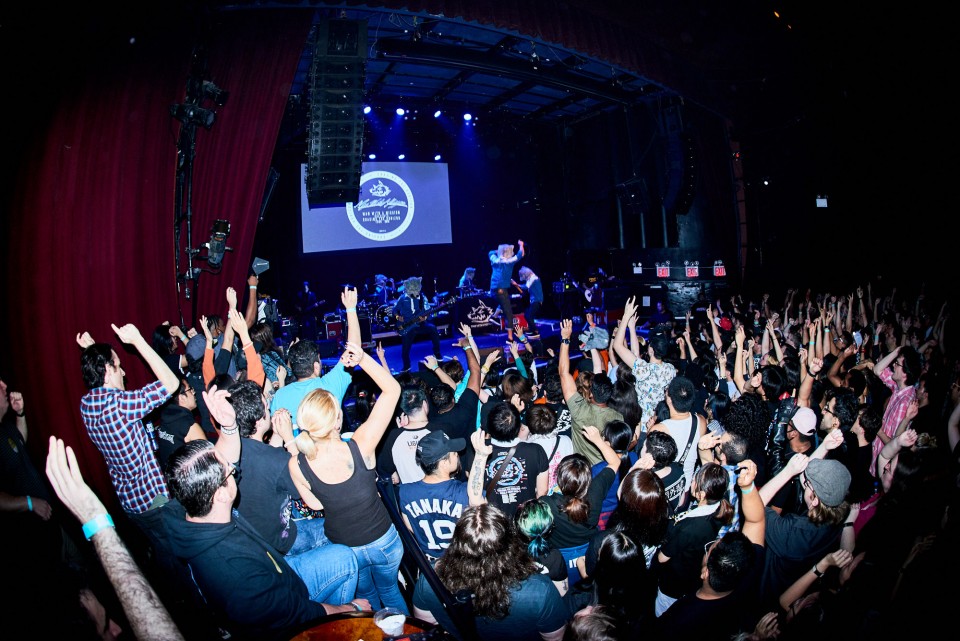