Eugene Heng heads the Waterways Watch Society, a volunteer organization that he started some two decades ago with the aim of keeping Singapore's spruced up and rejuvenated rivers clean and pristine.

That role has become more intertwined with Singapore's struggle to protect its water supply as the rivers and canals that intersect the tiny city-state are also a conduit for rainwater that flows into its reservoirs.

In 2008, the mouth of the Marina Channel in the south was dammed up with the development of the Marina Barrage to create Marina Reservoir -- Singapore's first reservoir to be located in the heart of the city, fed by five major rivers upstream.

As the reservoir taps heavily on an urban catchment area of rivers, drains and canals flowing through central Singapore, it has become even more critical to keep the waterways clean.

In fact, two-thirds of the island now acts as a water catchment, making Singapore one of the few countries to tap its urban stormwater on a large scale for consumption. In addition, a used water superhighway is also being built. 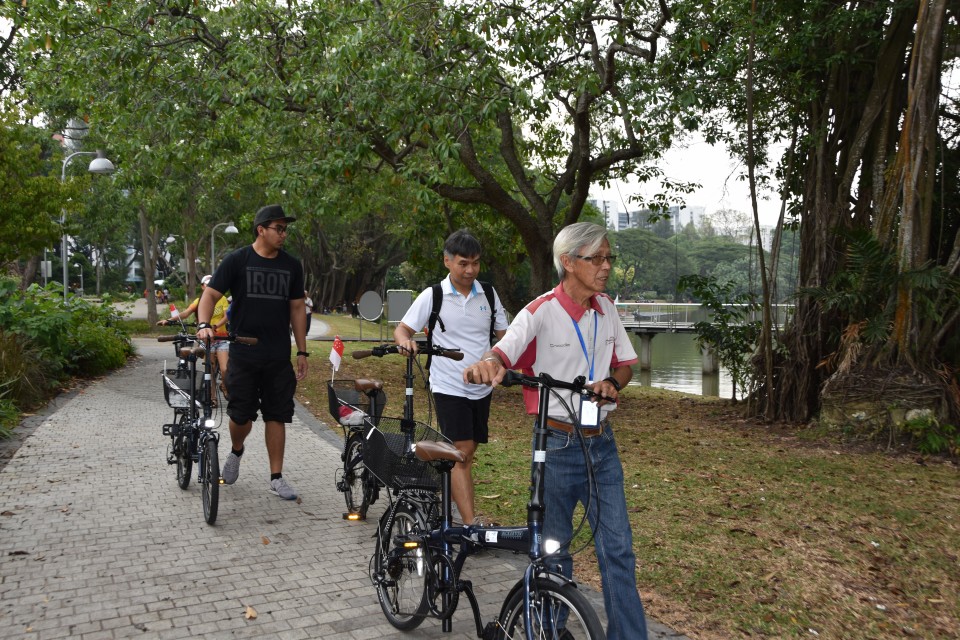 New members of WWS, who come from all ages and walks of life, are briefed on Singapore's water vulnerability before they set off on patrols by boat and bicycles to look out for litter, stopping now and then to politely remind people picnicking on the grassy banks about the importance of not littering and keeping the waterways clean.

"Many people even today don't understand that our rivers and canals in Singapore, the bulk of it is actually a source of collecting fresh water for our reservoir...We find a lot of litter being thrown (out), even today there is a challenge," Heng said.

In 2015, the Washington-based World Resources Institute ranked Singapore as one of the world's most water-stressed countries by 2040, vulnerable to disruptions in water supply, in a list dominated by Middle Eastern countries.

Despite the abundant rainfalls that tend to bless countries in the tropics, a lack of land to capture and store water has made Singapore highly dependent on water piped across from its larger northern neighbor Malaysia.

The provision of water is secured by two water agreements signed between Singapore and Malaysia's southern Johor state government when Singapore split from Malaysia and became an independent nation in 1965.

"Singapore has made a substantial progress towards self-sufficiency in water," Hu Jiang Yong, director of the Center for Water Research at the state-run National University of Singapore, said in a recent interview. He added that it "sets an excellent example for other water-scarce nations."

"The basis for Singapore's success is about overall policy, not just technology," said Hu.

According to water policy expert Asit Biswas, "Singapore has one of the best water management systems in the world."

The water plan, which is expected to meet a substantial demand by 2060 -- a year before its agreement with neighboring Malaysia expires -- is updated every five years, he said.

Indeed, water has been an issue of national survival for Singapore.

The 1961 water agreement expired in 2011 while the 1962 pact will expire in 2061, creating some uncertainty about future water supply.

To ease its dependence on Malaysia, Singapore has in recent years turned to high technology and has gradually diversified its water sources. There are now four so-called "national taps" -- the local water catchments, so-called NEWater, which is recycled from sewage water, desalinated water and water imported from Malaysia.

While the government does not disclose data on the amount or exact proportion of water it imports from Malaysia, experts believe that Malaysia is still supplying more than half of Singapore's water demand.

Although tightly secured by bilateral treaties, Malaysia's supply of water to Singapore has been a major sticking point in bilateral relations between the two countries for decades mainly due to their differing positions on the right for Malaysia to review and raise the price of water it sells to Singapore under the 1962 bilateral agreement.

Both sides are considering the possibility of dispute resolution through arbitration as one option.

In the meantime, with its experience in tackling its own water problem, Singapore has become a major global hub for exploring water technologies, with about 180 water companies and more than 20 water research centers based here.

It is already exporting technology and knowhow to help other countries resolve their water shortage problems, including China, India and Vietnam. Philippine President Rodrigo Duterte recently expressed interest in learning from Singapore to help the Philippines solve its worsening water crisis in Manila.

However, the future is still fraught with risk.

"Everybody in Singapore has to realize that in 2061, there is a danger that half the water, which is now coming from Malaysia, will not be available," Biswas said, referring to the expiry of the water agreement with Malaysia in that year.

Another factor is global warming. "The climate is becoming increasingly erratic...if you have a drought in Singapore and Johor from where the water comes, it can happen any time. If it's a long drought, Singapore will have some difficulty managing its water," he said.

A prolonged drought in 2017 raised concern in Singapore about the prospect of the Linggiu river in Malaysia's southern Johor state, which supplies water to Singapore, running dry.

Biswas said Singapore's water demand has to be dramatically reduced. "It needs a new mindset, we have to change the behavior patterns of the people and the industry," he said.

Water demand in Singapore is currently about 1.9 billion liters a day, equivalent to 782 Olympic-sized swimming pools.

The government has projected that Singapore's total water demand could almost double by 2060 and aims to reduce Singapore's per capita household water consumption from 143 liters in 2017 to 130 liters by 2030.