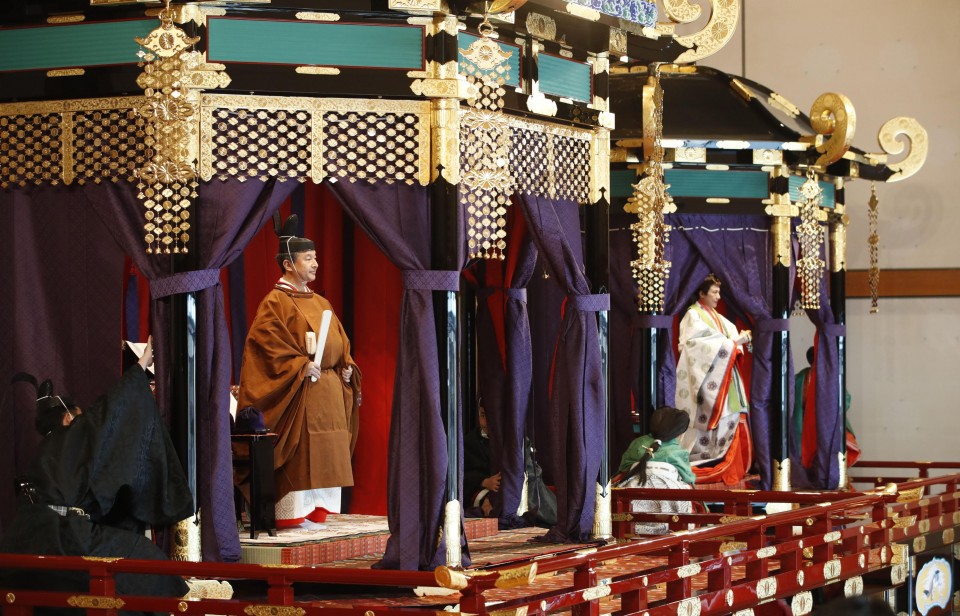 TOKYO - Japanese Emperor Naruhito officially proclaimed Tuesday his enthronement before roughly 2,000 guests, including some 420 dignitaries from about 190 countries and international organizations, in a ceremony at the Imperial Palace featuring elements of ancient protocol.

"I pledge hereby that I shall act according to the Constitution and fulfill my responsibility as the symbol of the state and of the unity of the people of Japan," said the 59-year-old emperor as he unfolded a script and read it out from inside the 6.5-meter-high canopied Takamikura imperial throne.

In the ceremony, equivalent to a coronation, which lasted about 30 minutes, the 126th emperor in the world's oldest hereditary monarchy added, he always wishes for "the happiness of the people and the peace of the world, turning my thoughts to the people and standing by them."

He was clad in a "Korozen no goho," a dark-orange robe with a design dating back to the ninth century that emperors wear on special occasions. 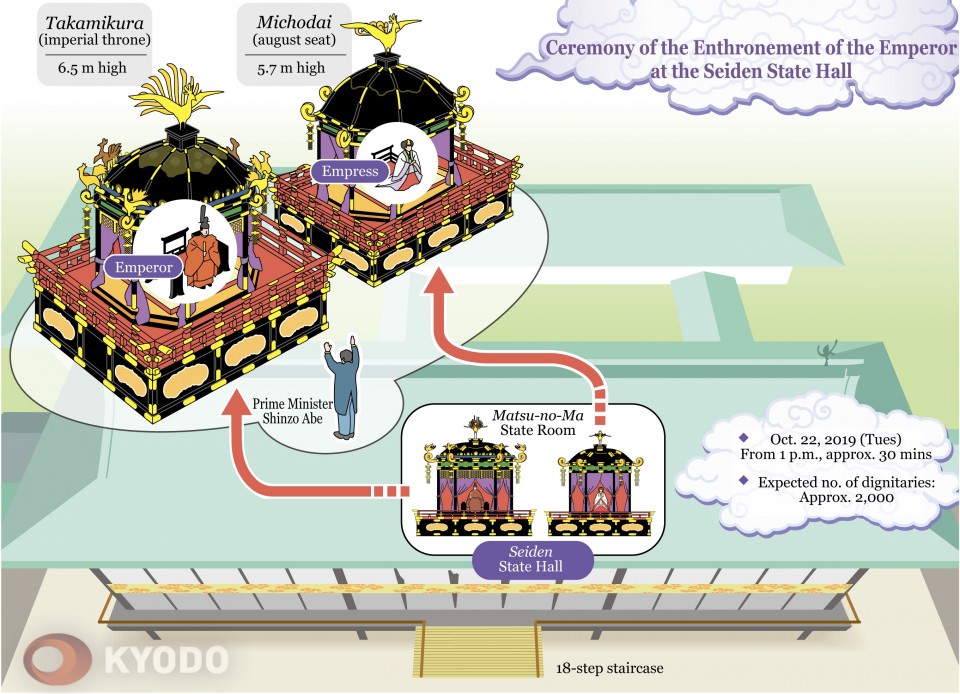 In the rite dating back more than 1,000 years, which was held half a year after the emperor's ascension to the throne, Prime Minister Shinzo Abe conveyed felicitations from the floor of the "Matsu-no-Ma" stateroom at the Seiden State Hall.

"We will make our utmost effort to create a peaceful, bright future full of hope for Japan" and an era where people come together to develop the country's culture, Abe said.

The prime minister, dressed in a tailcoat, then led the guests in three banzai cheers, wishing longevity for the emperor.

Heavy rain in the morning prompted the Imperial Household Agency to reduce the number of ceremonial officials in traditional Japanese attire and move them inside to the corridor from the courtyard, where more than 70 were originally scheduled to line up carrying swords and bows. But the rain stopped once the ceremony started.

Two of the three items of imperial regalia -- the sword and jewel -- which the emperor inherited in May as proof of his ascension to the throne, were placed at the Takamikura throne at the ceremony along with the state and privy seals. A 21-gun salute was offered at the end by the Ground Self-Defense Force.

In the evening, the couple welcomed guests at a court banquet held for the attendees of the enthronement ceremony. The emperor was dressed in a tailcoat, while the empress wore a long dress and a tiara. 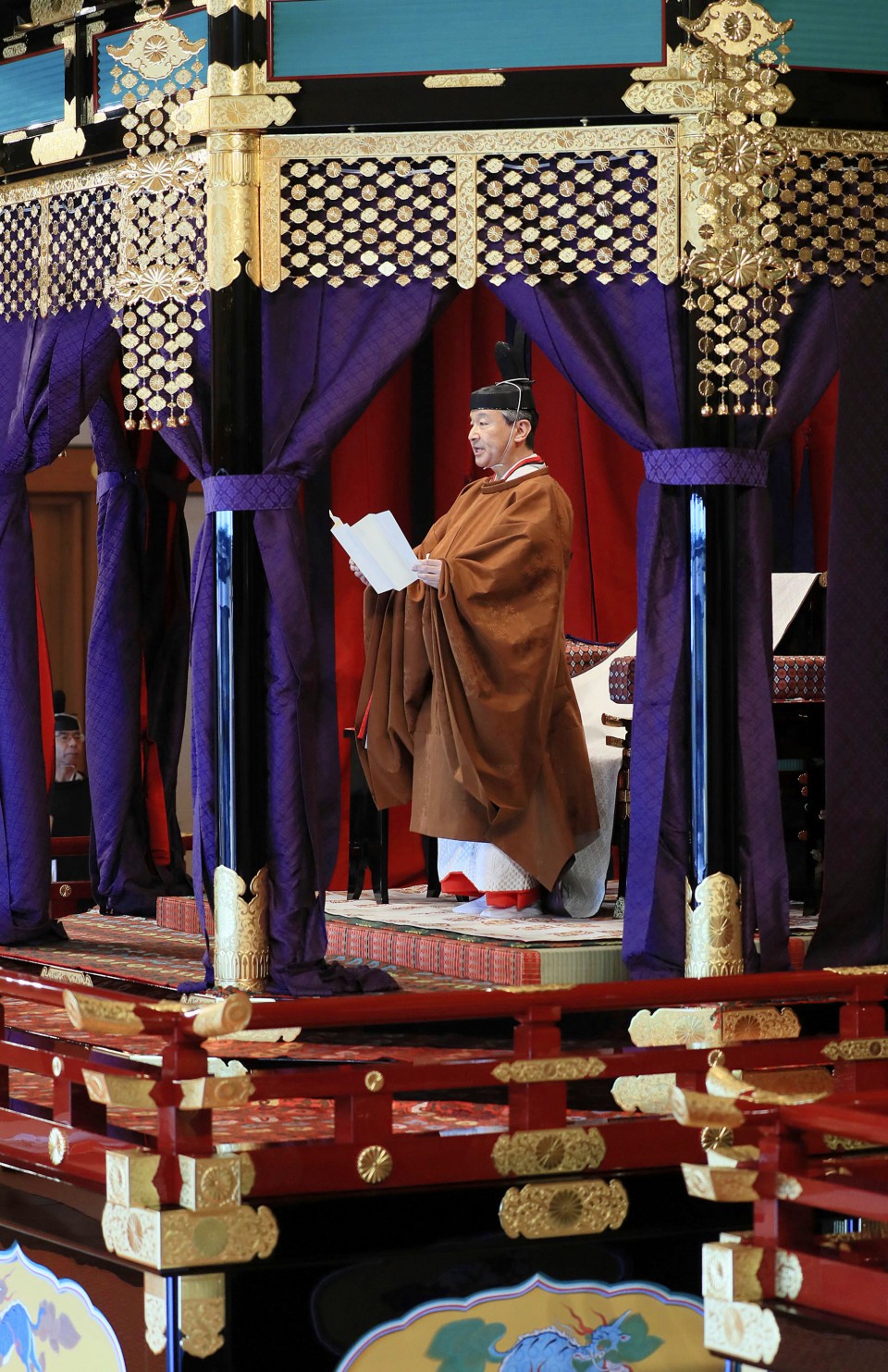 Japan made the day a national holiday and pardoned around 550,000 petty criminals on the occasion, in the first amnesty since the emperor's 1993 marriage to the empress, a Harvard and Oxford-educated former diplomat.

Security was tightened, with up to 26,000 police officers mobilized from across Japan for the enthronement ceremony.

Emperor Naruhito, who also studied at Britain's University of Oxford and is the first Japanese monarch to have studied abroad, succeeded to the throne on May 1, the day after his 85-year-old father, former Emperor Akihito, stepped down.

The former emperor became the first Japanese monarch to abdicate in about 200 years due to concerns over his advanced age and weakening health. Tuesday's ceremony was one of the highlights in a series of rituals accompanying the imperial succession.

Former Emperor Akihito and former Empress Michiko, as well as 96-year-old Princess Yuriko, widow of the late Prince Mikasa, who was the emperor's granduncle, did not attend the enthronement ceremony, which was held as a state occasion.

The ritual followed the style of former Emperor Akihito's enthronement ceremony in 1990, as well as that of Emperor Hirohito, posthumously known as Emperor Showa, held in 1928 in Kyoto, where the successive emperors had lived until the late 19th century. 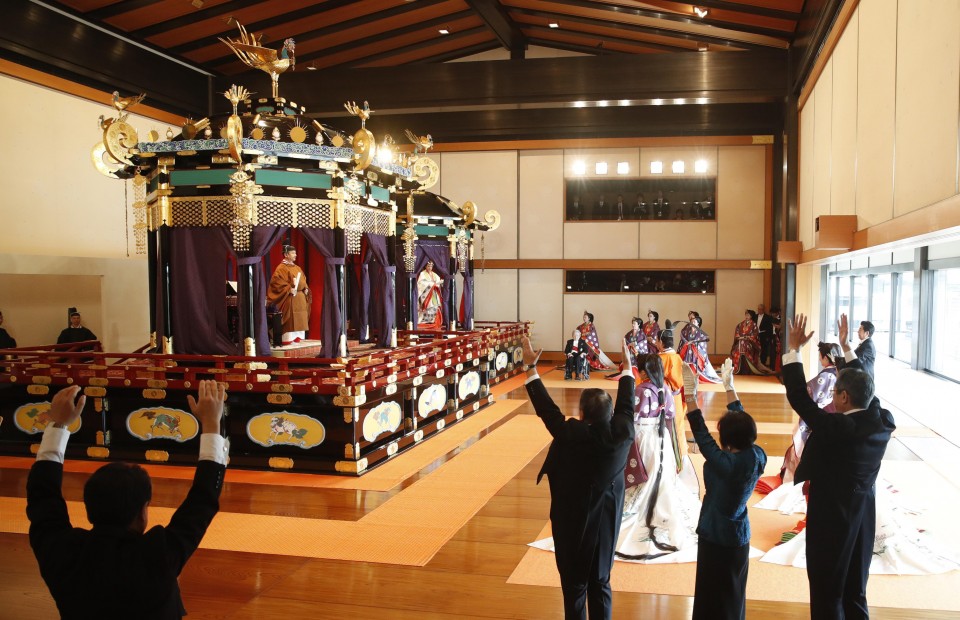 (PM Abe leads the "banzai" cheers for the emperor)

There had been criticism that the form the ritual takes contravenes the postwar constitutional separation of state and religion as well as the sovereignty of the people since the emperor declared his enthronement from an elevated position, with the prime minister standing below.

The imperial couple was initially scheduled to parade in the capital following the ceremony, but the event was postponed to Nov. 10 in the wake of a deadly typhoon earlier in the month.

Still, people gathered along streets in the morning, braving the rain, to get a glimpse of the imperial couple as they separately headed for the event from the Akasaka Imperial Residence, waving from their cars along the way.

"I am full of emotions after being able to see their majesties today. I had been looking forward to this day, and I want to support them into the future," said Saeko Toyama, 33, from Nagoya.

While the role of the postwar imperial family has been symbolic, their significance lies in that Japanese "debate what it means to be Japanese through the monarchy," said Kenneth Ruoff, a professor of modern Japanese history at Portland State University.

Emperor Naruhito plays the viola and is a water transport expert who served as honorary president of the U.N. Secretary-General's Advisory Board on Water and Sanitation between 2007 and 2015.

Empress Masako has struggled after developing a stress-related illness some 15 years ago after giving birth to their only child, Princess Aiko, 17, amid pressure to produce a male heir. The Imperial House Law stipulates that only males of the patrilineage can ascend the throne.

The empress has gradually expanded the scope of her activities in recent years and was often seen talking with foreign leaders and their spouses without using interpreters. 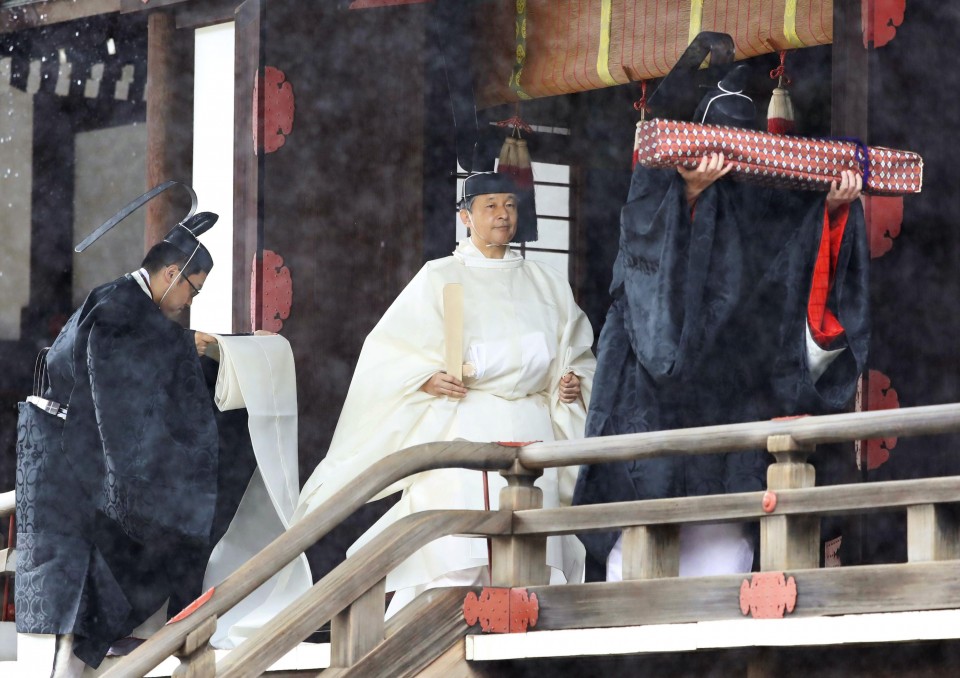 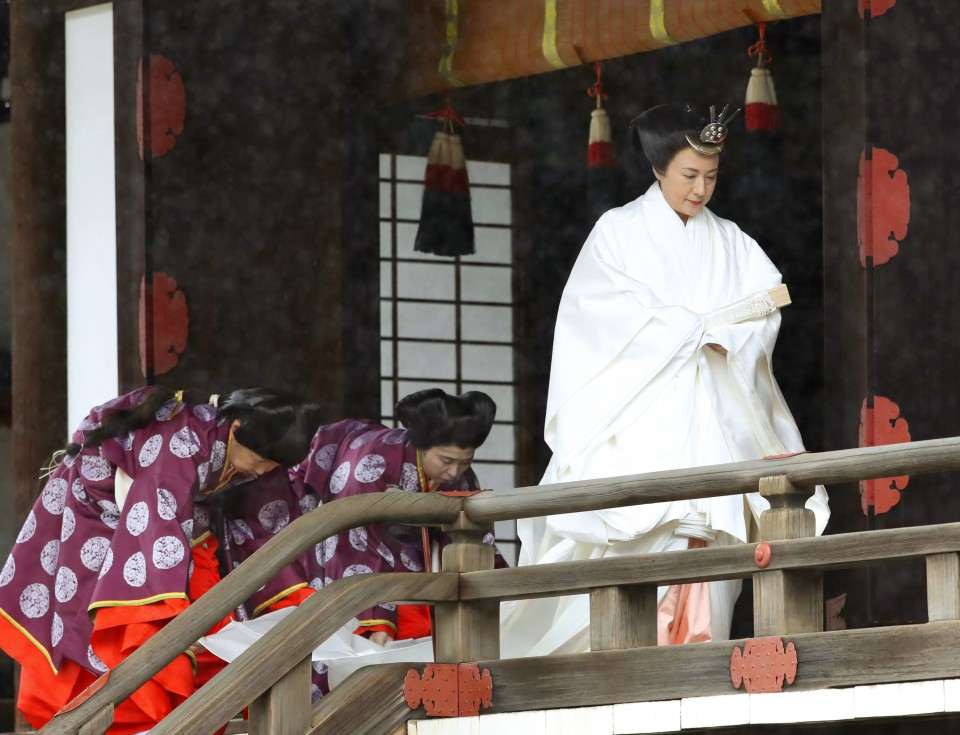 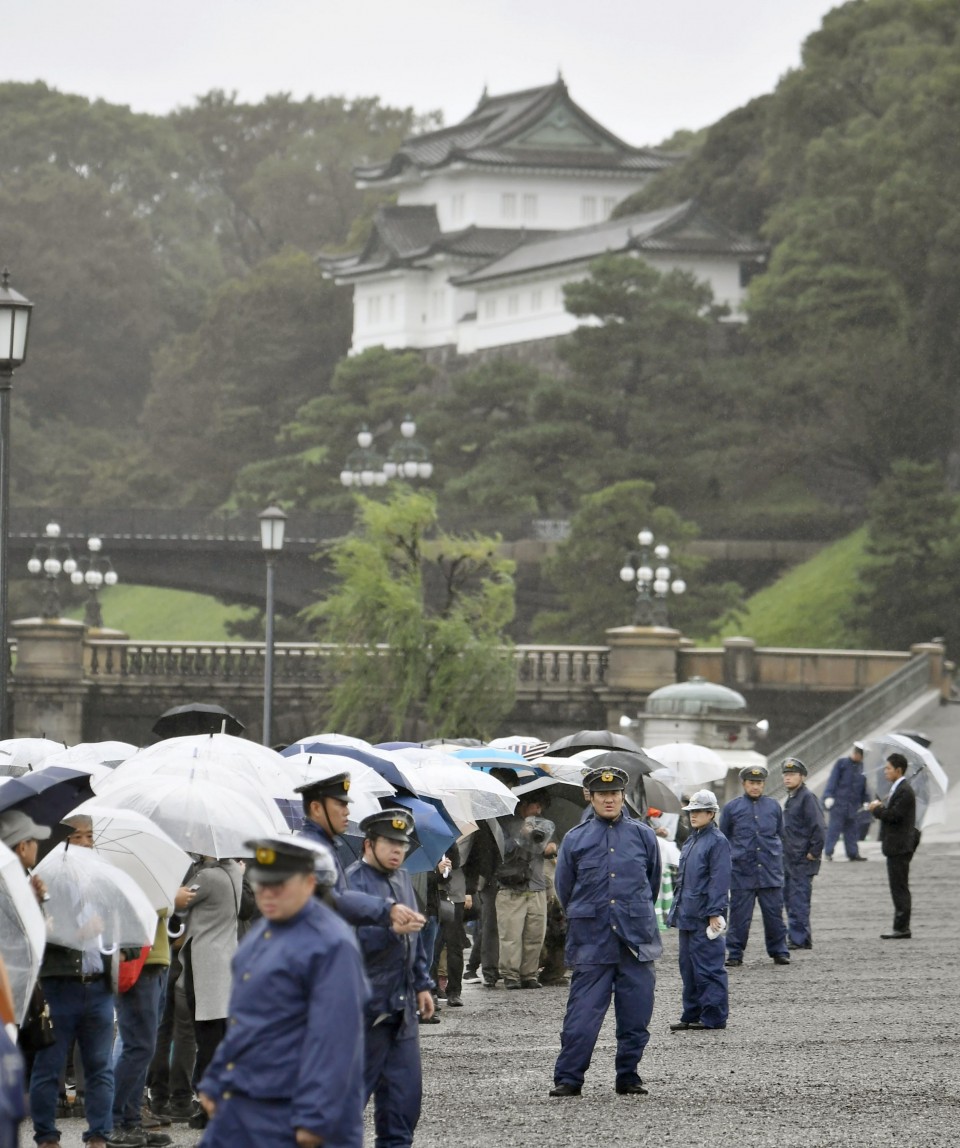 (Former prime ministers of Japan were among guests at the ceremony) 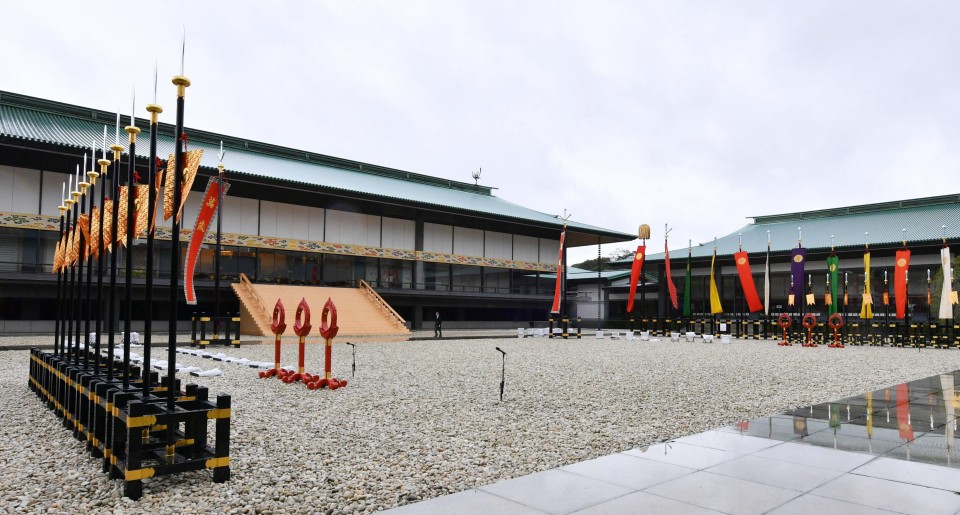 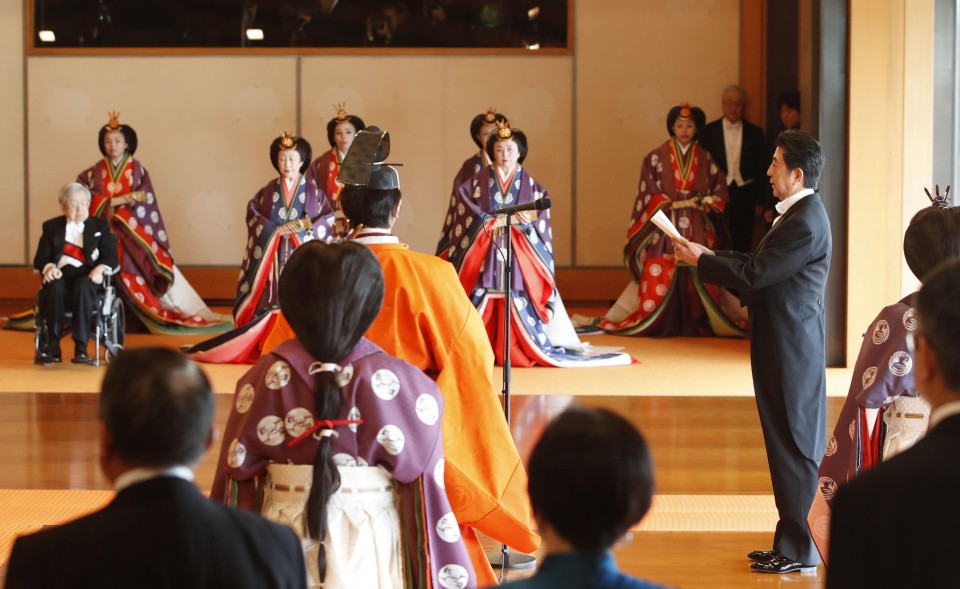 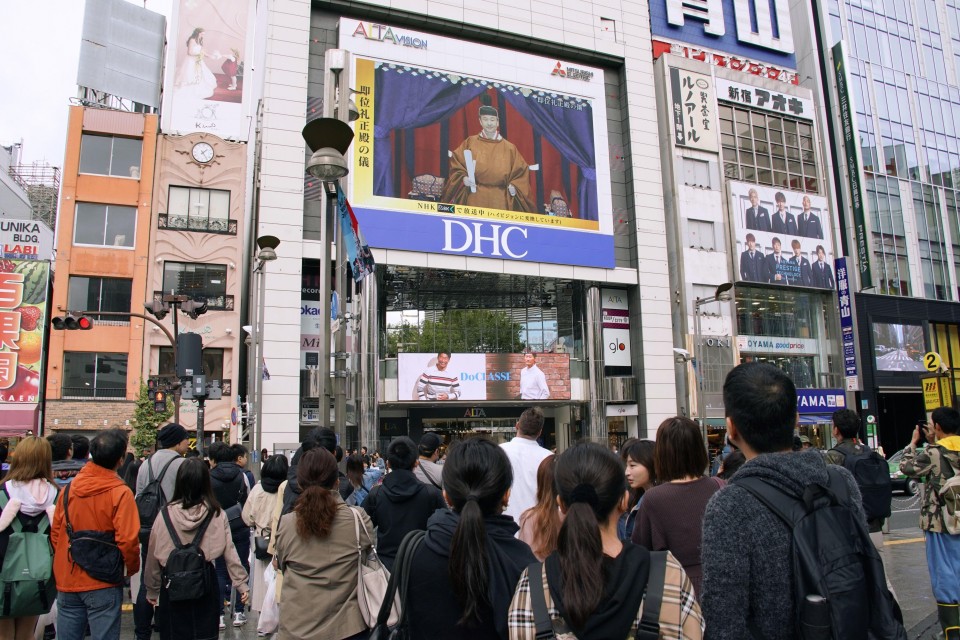 Full text of Emperor Naruhito's remarks during the ceremony:

Having previously succeeded to the Imperial Throne in accordance with the Constitution of Japan and the Special Measures Law on the Imperial House Law, I now perform the Ceremony of Enthronement at the Seiden State Hall and proclaim my enthronement to those at home and abroad.

I sincerely hope that our country, through our people's wisdom and unceasing efforts, achieves further development and contributes to the friendship and peace of the international community and the welfare and prosperity of humankind. 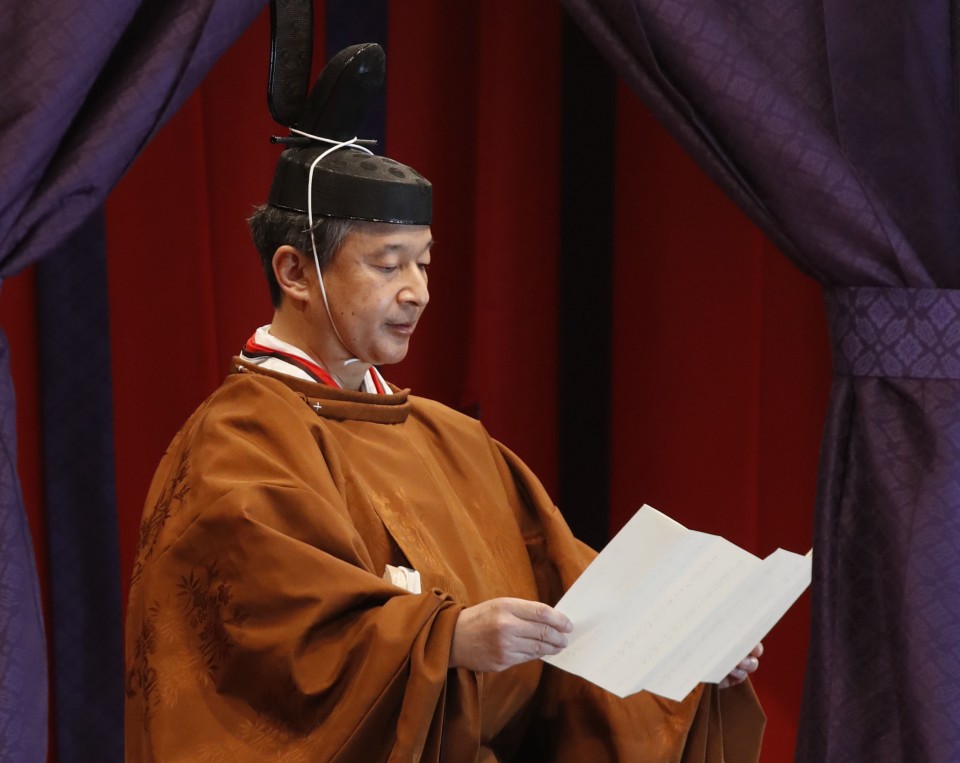