Sadako Ogata, a respected Japanese public administrator who worked to protect people displaced by conflicts as U.N. high commissioner for refugees, has died, her family said Tuesday. She was 92.

As the first woman and Japanese national to assume the U.N. post in 1991, Ogata led efforts to help refugees and internally displaced people around the world including Kurdish refugees from Iraq after the Gulf War. 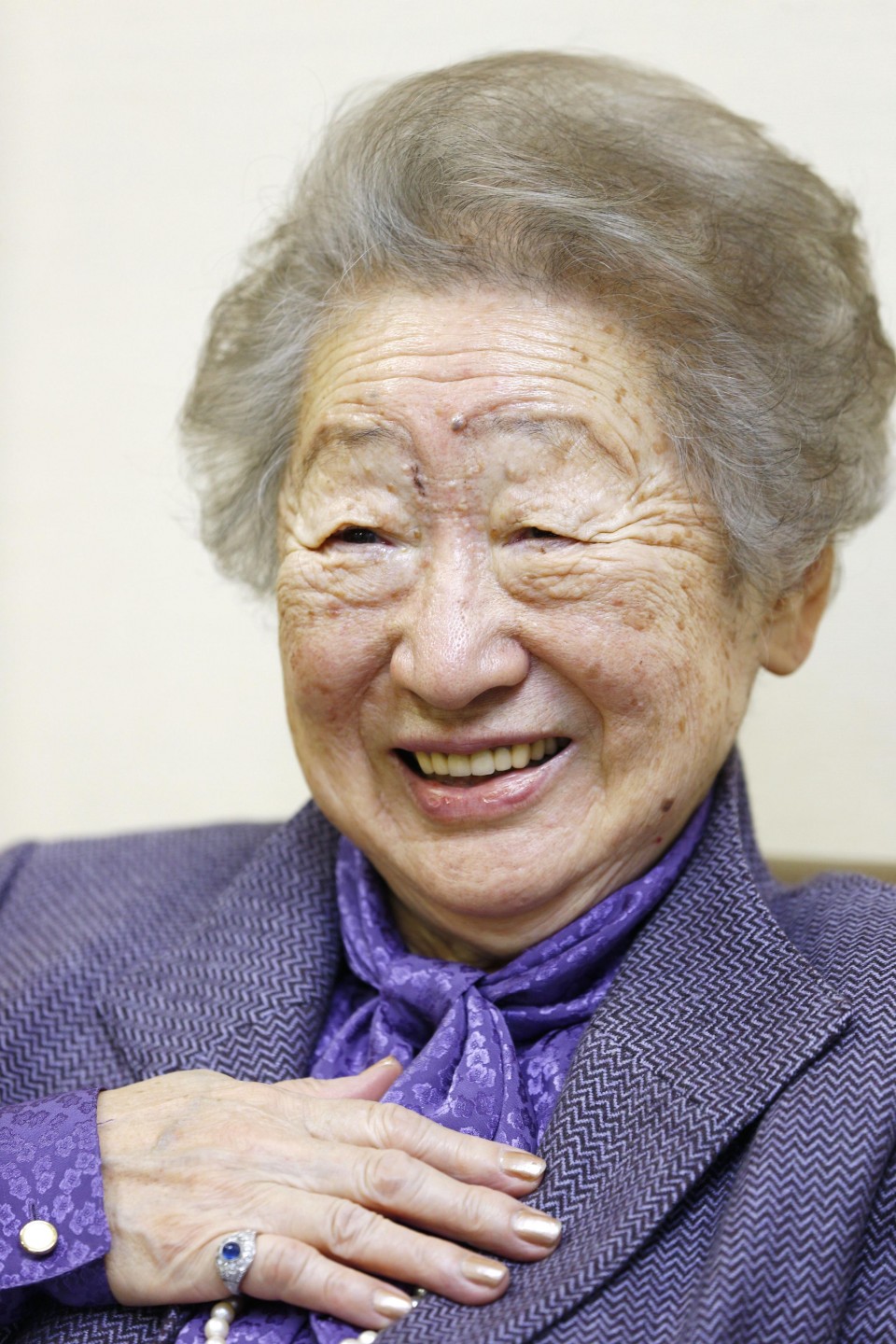 She also tackled the refugee crises in the former Yugoslavia and Rwanda in the 1990s, making numerous visits to conflict zones during her tenure through 2000.

"Mrs. Ogata was a visionary leader who steered UNHCR through one of the most momentous decades in its history, transforming the lives of millions of refugees and others devastated by war, ethnic cleansing and genocide," current High Commissioner Filippo Grandi said in a statement.

"She was a committed internationalist and a friend to the United Nations throughout her life," he added.

According to the Japan International Cooperation Agency, which she formerly headed, Ogata died in a Tokyo hospital at 2:18 a.m. on Oct. 22, with the cause of death not revealed. A funeral service was held by her relatives on Tuesday, and a memorial event will be organized at a future date, JICA added.

Japanese Prime Minister Shinzo Abe lauded her for "making great contribution to peace, stability and development of the world for years" and said that she "stood on the front lines of humanitarian aid and development" in a statement. 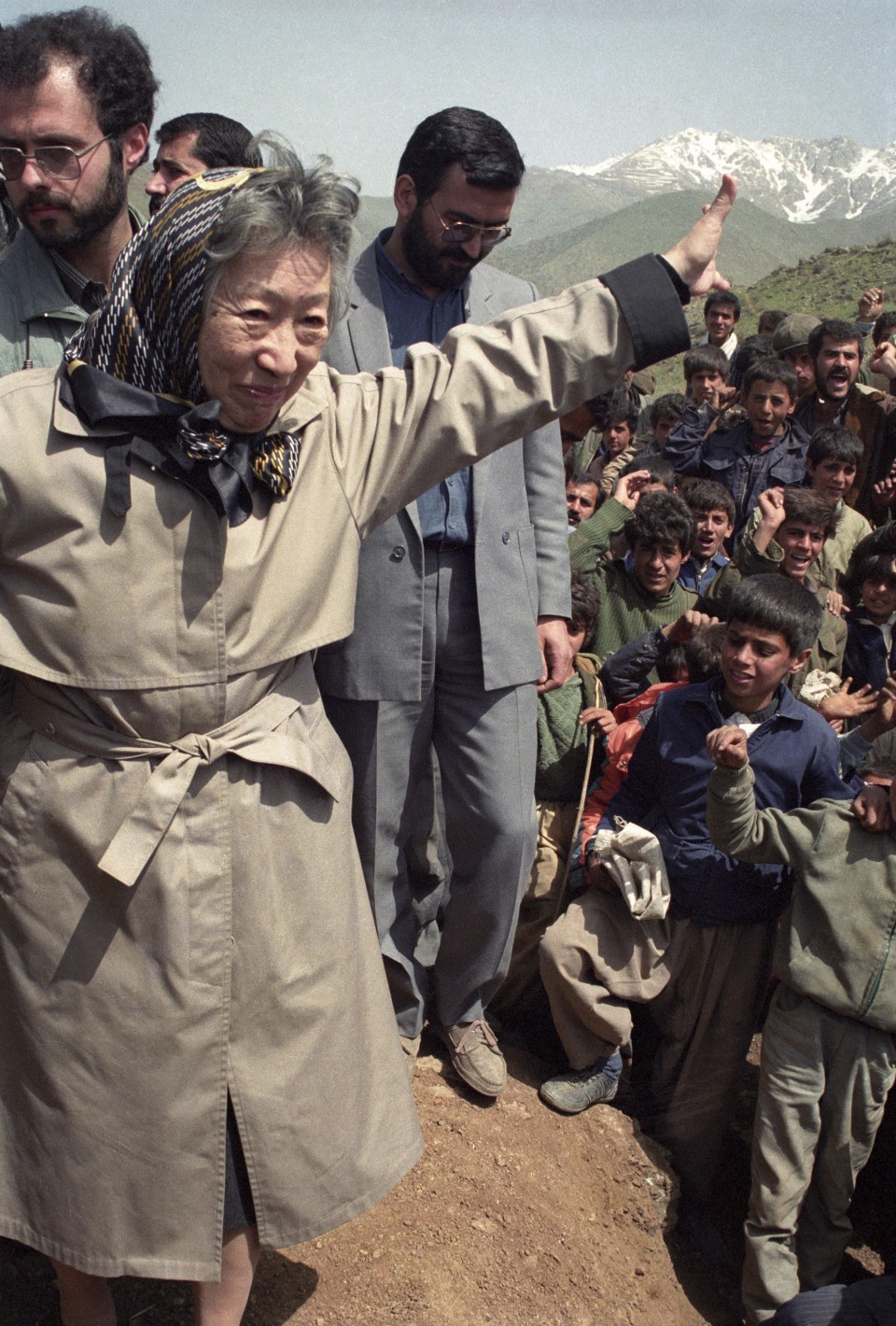 (Visit to Kurdish refugee camp in Iran in April 1991)

Abe recalled how she had shown him around a refugee camp in Kenya in 2001 when he accompanied then Prime Minister Yoshiro Mori as a deputy chief Cabinet secretary.

In 2003, Ogata became the first president of JICA, which was newly launched as an independent administrative institution in October that year.

She traveled to more than 40 countries as head of JICA and oversaw efforts to provide aid to war-torn countries including Afghanistan and South Sudan. She retired as chief of the agency in 2012. 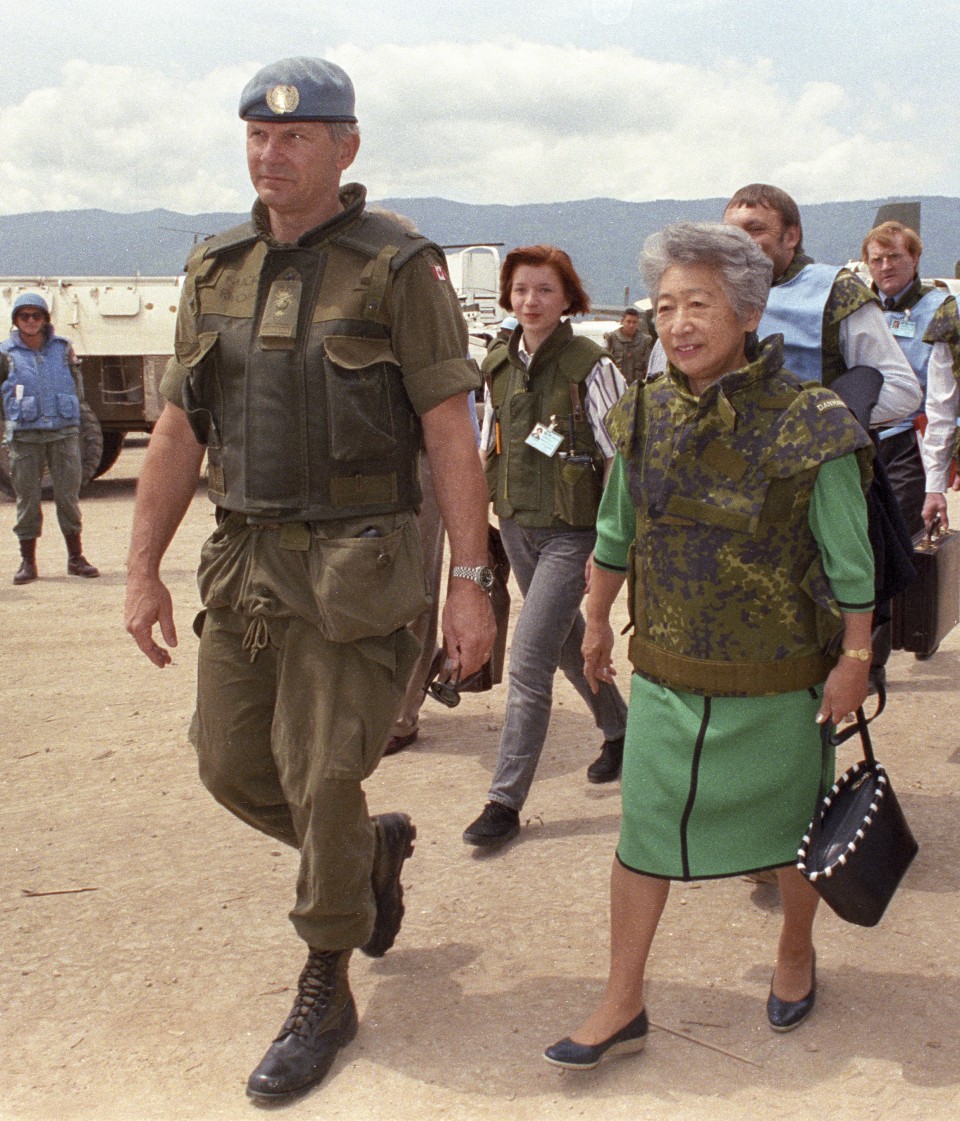 (At Sarajevo airport in Bosnia and Herzegovia in July 1992)

More recently, Ogata served as a member of an advisory body to the organizing committee of the 2020 Tokyo Olympic and Paralympic Games.

Ogata's death was met with shock by those close to her.

"I had planned to go to Japan tomorrow and was looking forward to talking on the phone with her like I always do," said Izumi Nakamitsu, the U.N. undersecretary general and high representative for disarmament affairs who previously worked under Ogata at the UNHCR office and calls her a mentor.

"She was getting on but still in good health, so I didn't imagine she would pass away," Nakamitsu said, although she added that she believed the death of Ogata's husband Shijuro, a former Bank of Japan assistant governor for international relations, in 2014 had taken a toll.

With much sorrow, we mourn the passing of Sadako Ogata, eminent scholar, great internationalist, humanitarian leader, former UN High Commissioner for refugees and JICA President. A time of sadness, memories and continued inspiration for all of us at UNHCR. May she rest in peace. pic.twitter.com/scmOf0bohC

Mitsuo Yoshizawa, 67, a cousin of Ogata who is a math professor at J.F. Oberlin University, told reporters after attending her funeral at a Tokyo church on Tuesday, "She was always proactive and sympathetic to the weak. And she was humble, too."

Ogata was born in Tokyo on Sept. 16, 1927, into a prominent political family -- her great-grandfather was Prime Minister Tsuyoshi Inukai and her grandfather was Foreign Minister Kenkichi Yoshizawa.

As her father was a diplomat, she spent her early years abroad, including in the United States and China.

After becoming in 1976 the first Japanese woman to represent the country at the United Nations as a minister at Japan's permanent mission to the international body, Ogata served as the Japanese representative at the U.N. Commission on Human Rights from 1982 to 1985.

In 1989, she became head of the Faculty of Foreign Studies at Sophia. 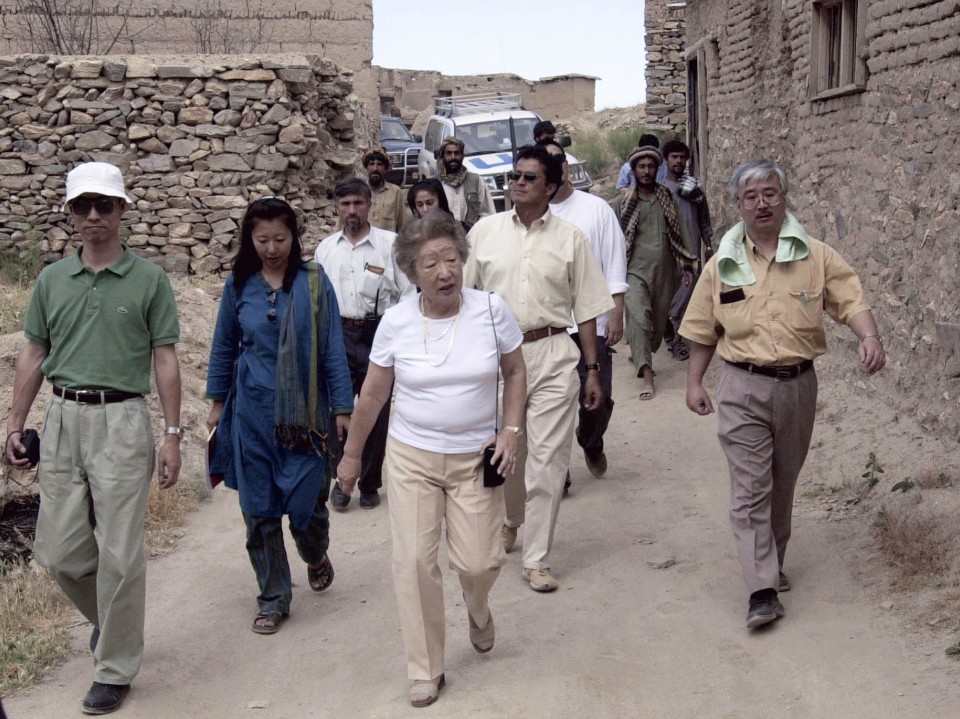 (Visit to the Shomali Plain north of Kabul in June 2002) 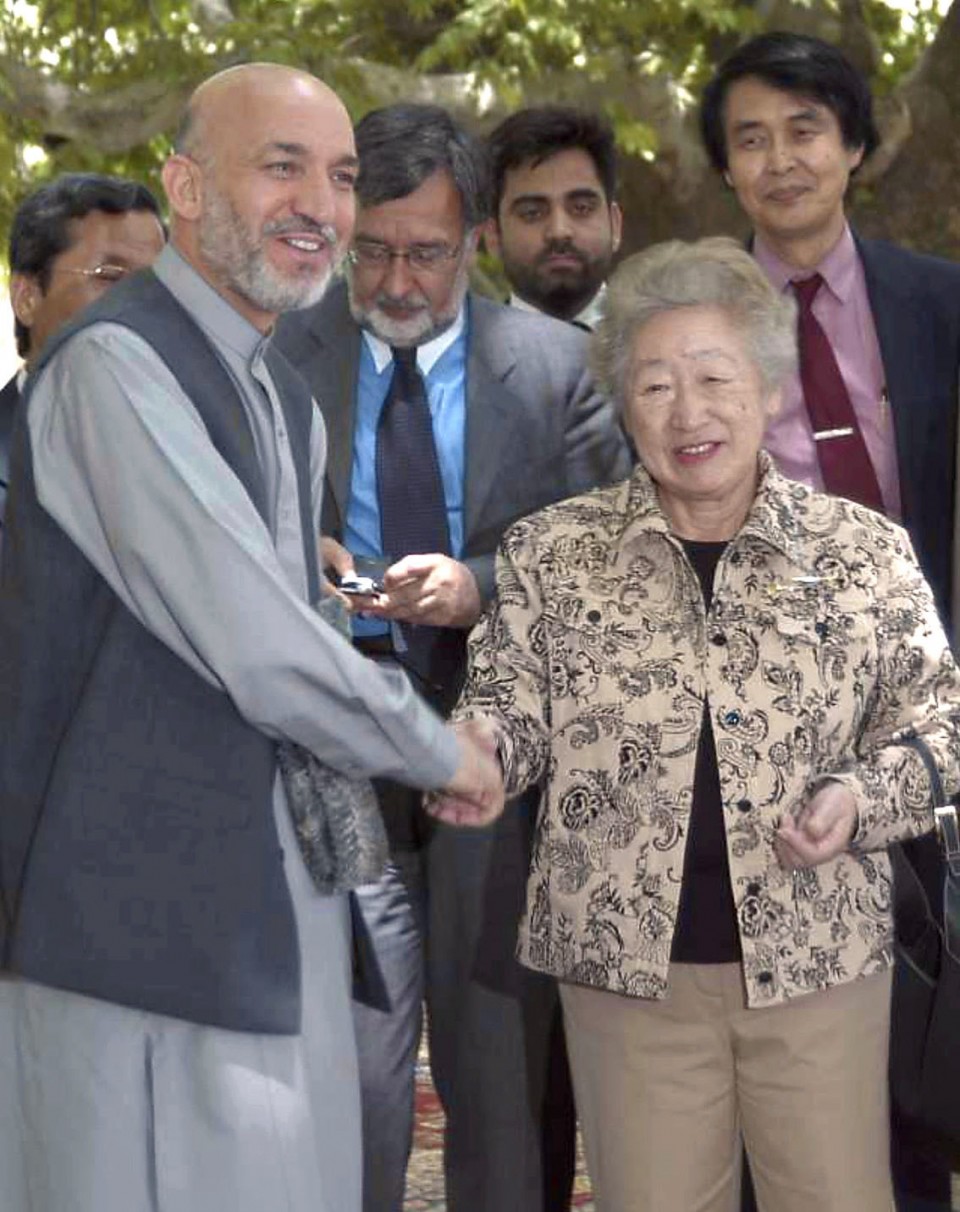 (With  Afghan President Hamid Karzai in Kabul in July 2003) 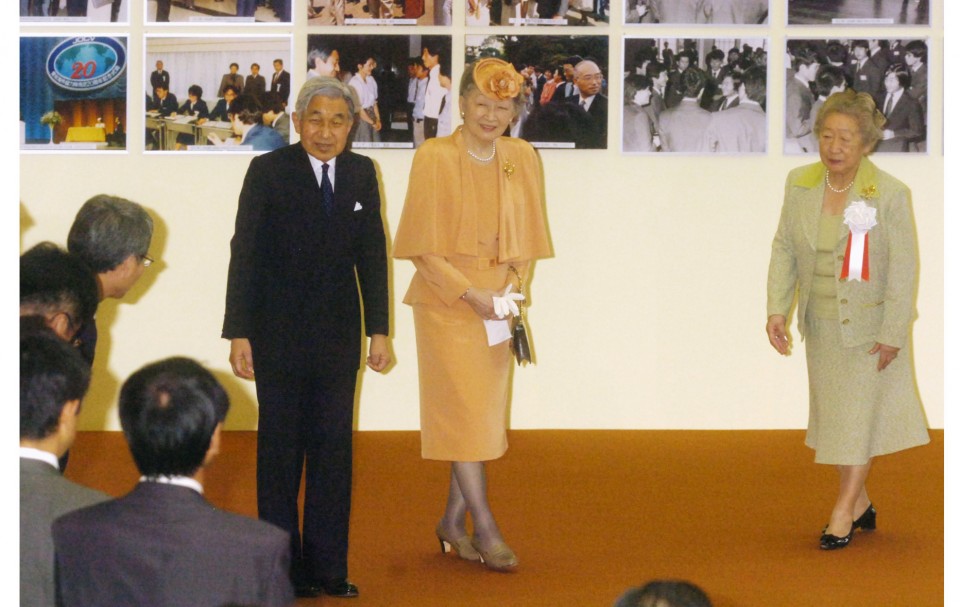 (With Emperor Akihito and Empress Michiko in Tokyo in October 2005) 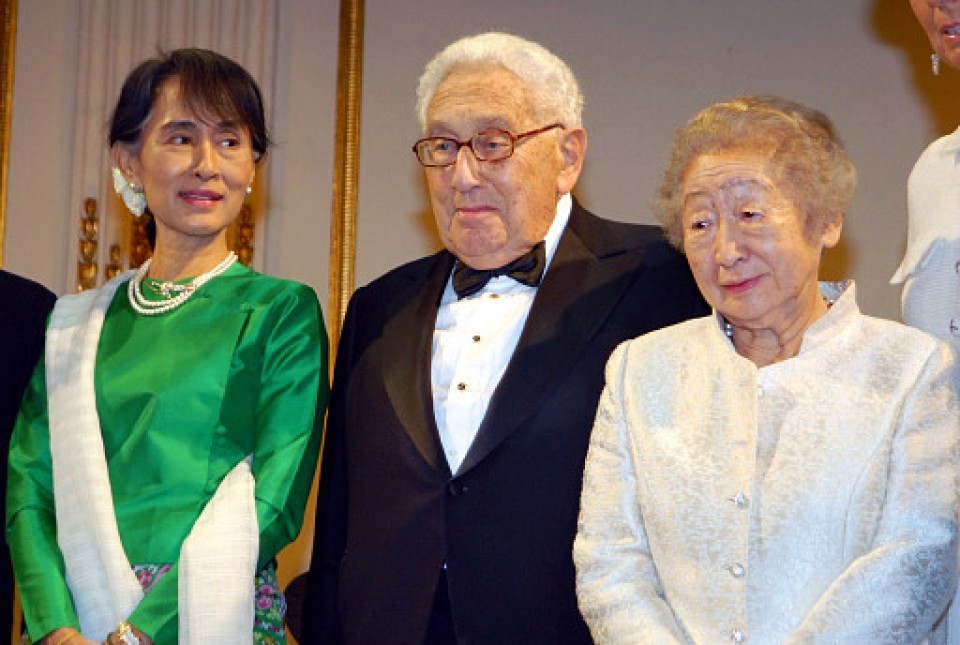