Toronto native Katsura Sunshine has experienced setbacks as a rakugo storyteller, the 400-year-old Japanese comedic art form, but he has not given up on a long-held dream to build a rakugo theater in the Big Apple.

Sunshine, who studied the traditional and unique form of verbal entertainment in Japan as an apprentice to rakugo master Katsura Bunshi VI -- then Katsura Sanshi -- for three years from 2008, recently began an off-Broadway run at the New World Stages in Manhattan.

"I would love to bring rakugo to as many places as possible -- big theaters -- or as many passionate theatergoers as possible. But one day also, I would love to build an actual 'yose,'" Sunshine, 49, told a press conference before showtime, referring to a traditional theater for rakugo storytelling. "I think New York will one day be ready for that." 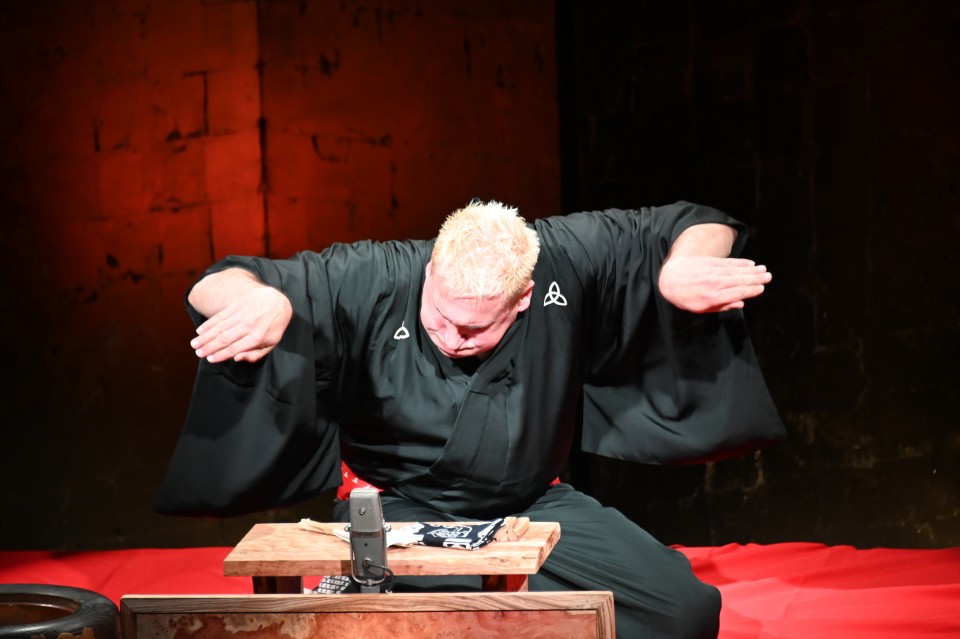 Sunshine has performed his craft in a limited capacity in a slew of countries around the world, including Canada, Britain, Thailand, Gabon and South Africa, among several others. In 2017, he made both his West End debut near Leicester Square and his off-Broadway debut at the SoHo Playhouse.

Sunshine believes New York City is a place where rakugo can resonate to a wider audience, transcending borders and language barriers because of its universal themes related to human foibles dating back centuries. But after a three-week run of his show in the city, he hit a stumbling block.

His team decided to cut things short after the SoHo Playhouse went up for sale.

Joe Trentacosta, 44, Sunshine's producer, booked another venue, the Davenport Theater, but a month before showtime, the theater's lease was not renewed, and the landlord converted the space into a Tango dance hall. Since then, Sunshine has been working his way back toward the New York City spotlight. 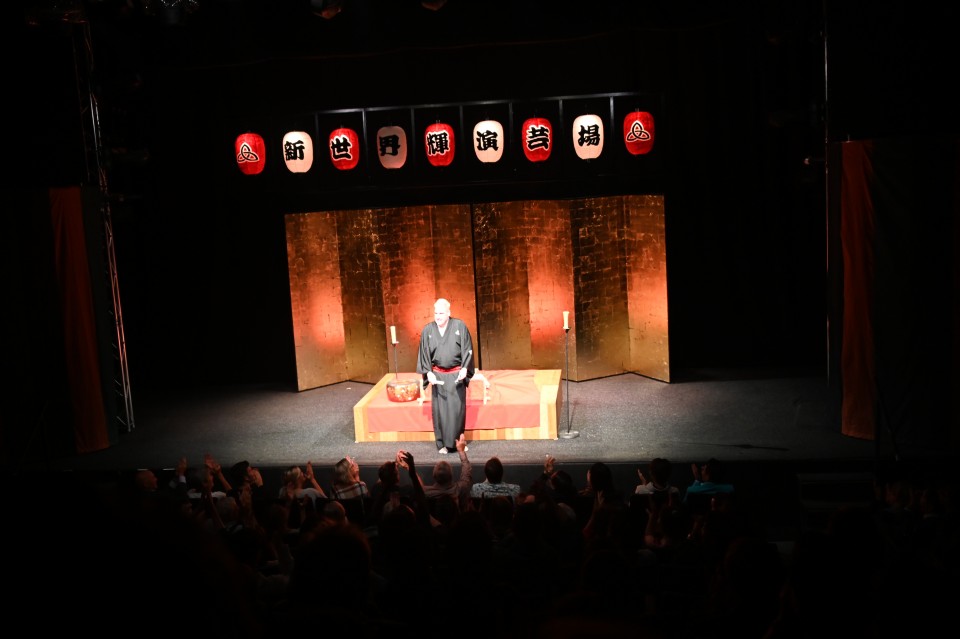 "New York is full of these walls, and you feel like you are hitting a wall but the one thing that I have learned, and I have learned very much from Joe, is that every time you hit a wall, it is an opportunity for something different, maybe something better."

That is how Sunshine views the three-and-a-half-month-long run through Jan. 4 at the New World Stages in Midtown. "In a way, it has taken a lot longer than I might have thought at first, but it is a complete dream come true."

For the opening on Sept. 19, Sunshine performed in English with splashes of Japanese, two stories, his master Bunshi's original, "Umare Kawari," a tale of a tragic reincarnation, and "Chiri Tote Chin," a traditional rakugo about fooling a smart-aleck friend into eating rotten tofu using polite manners common in Japan. 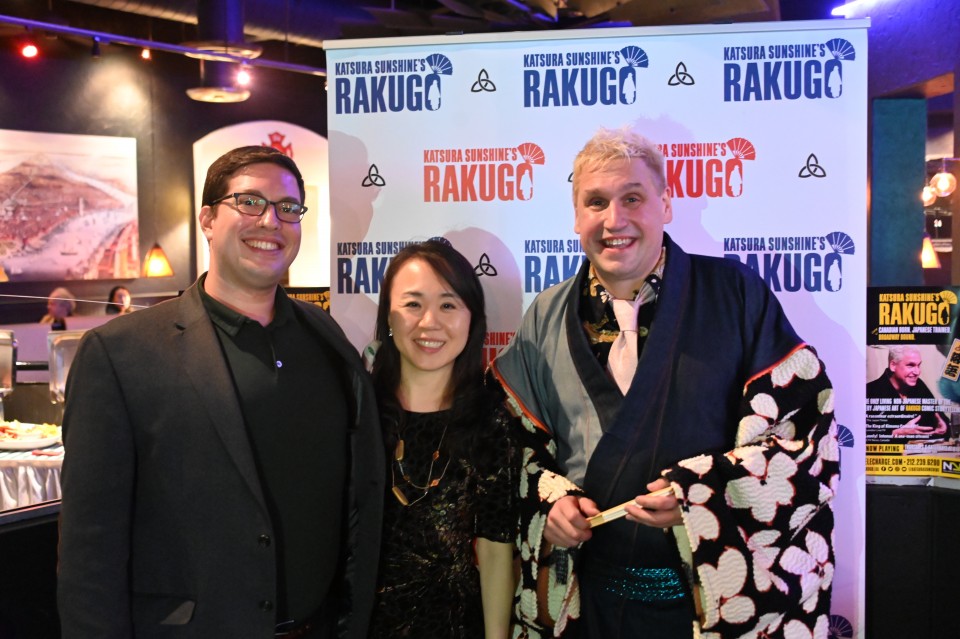 With a minimal set, including a fan and hand towel as his only props, the lone storyteller winds long and intricate traditional Japanese tales, some have described as a one-person sitcom.

During the Christmas holidays, he plans to tell children family-oriented stories but will tell more scandalous tales -- related to affairs, gambling and drinking -- in the closing month.

Born Gregory Robic to parents of Slovenian origin, he became interested in the similarities between Greek comedies by Aristophanes and the Japanese Noh and Kabuki dramas, when he booked a six-month vacation for Japan in 1999.

His version of Aristophanes' "Clouds" ran for 15 months in Toronto in 1995 before he embarked on a tour of eastern and central Canada and later decided to pursue studies in Japanese theater.

"I just thought I will go to Japan and see a little Kabuki and then come back to Canada and keep being a playwright and write musicals," said Sunshine. "But I think by the third day in Japan I realized I was just going to stay for the rest of my life, I loved it so much."

Five years later, Robic was introduced to the Japanese monologue theatrical while at a yakitori, skewered chicken, restaurant in Yokohama, where rakugo shows were held monthly. 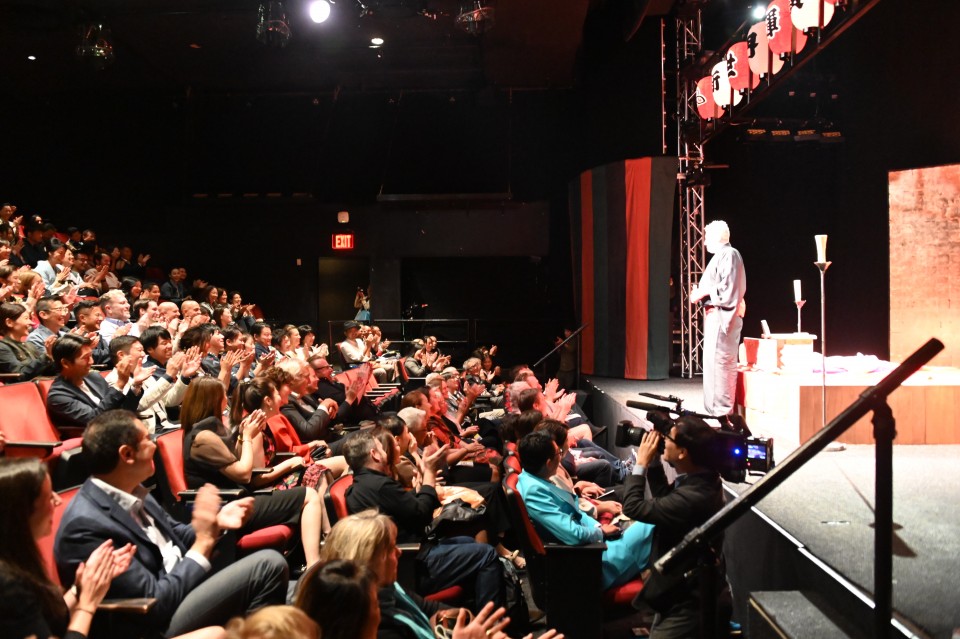 He was immediately struck by two kimono-clad male rakugo comedians who told their respective stories while kneeling in a small tatami mat room -- ending with big punchlines, or ochi in Japanese where comedic suspense crescendos before an unexpected finish.

"After I saw this four times, I thought, this is what I was born to do," said Sunshine, explaining that his true inspiration came from the stories of his master Bunshi.

Robic received the stage name Katsura Sunshine from Bunshi during his apprenticeship, taking both his master's last name Katsura in the rakugo tradition and part of his first Sanshi, the San, meaning three, combined with the Japanese word for "Shine."

After completing his apprenticeship in 2011, Sunshine became the first Western Kamigata (Osaka style) rakugo storyteller -- a Canadian in Osaka and a Swede in Tokyo have since started apprenticeships -- and began to perform in various countries at the invitation of embassies and consulates of Japan. 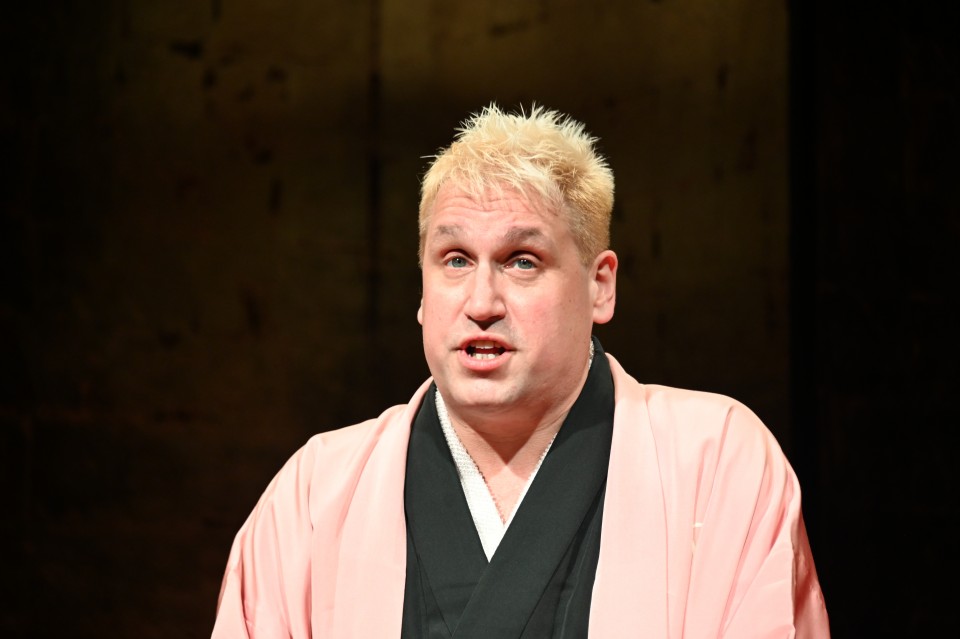 "Doing things as a volunteer at the embassies and consulates, that is fine, but you can only reach a very limited number of people," he said. "I just would love to make rakugo known throughout the world," said Sunshine, who currently divides his time between New York and Tokyo.

Audience member Remi Steele, a Japanese American middle school student, who discovered the comedian on YouTube and also watched him live at the SoHo Playhouse in 2017, appreciates how a non-Japanese foreign national has delved into the ancient Japanese art form. She gave him a bouquet after the New World Stages show.

"I think it's really funny because rakugo is an old Japanese entertainment," said Steele, explaining that she would never expect a Canadian in modern times to be performing rakugo all over the world.

Although Sunshine's rakugo performances at the New World Stages are expected to end in January, the duration could be extended if the theater has many sellout crowds, he says. "I would love to run as long as Chicago or Phantom of the Opera, or one of those shows."

Sunshine's team has partnered with Brooklyn-based arts nonprofit J-Collabo to create "The Sunshine Fund," dedicated to spreading Japanese culture to the United States and the world, including supporting rakugo, producer Trentacosta said.

A long-term goal of the fund is to create a pipeline for Japanese performances in New York and North America, including Sunshine's hope of developing his own theater.

After the show, fans gathered at Patrick's Restaurant and Oyster Bar near Times Square for the after-party and to take photos with Sunshine.

After taking a selfie with a fan, Sunshine said, "It was a very friendly audience. I haven't done those stories for a couple of years, (and) I felt very rusty, but they were so nice. It was just awesome, so what can I say, it's a first step to a long ride, I hope."