TOKYO - Japan ramped up rescue efforts on Sunday for survivors of a typhoon that brought record-breaking amounts of rain, flooding huge swaths of residential districts and leaving at least 35 dead and nearly 20 others missing.

A day after Typhoon Hagibis lashed Tokyo and other areas in central, eastern and northeastern regions, 17 people are still missing, according to a Kyodo News tally based on information provided by rescuers and other authorities.

Some 27,000 members of the Self-Defense Forces have been dispatched to those regions, including Nagano, where they tried to rescue about 360 people who were stranded after an embankment of the Chikuma River collapsed, with the land ministry warning of the possibility of floodwaters up to 5 meters deep. 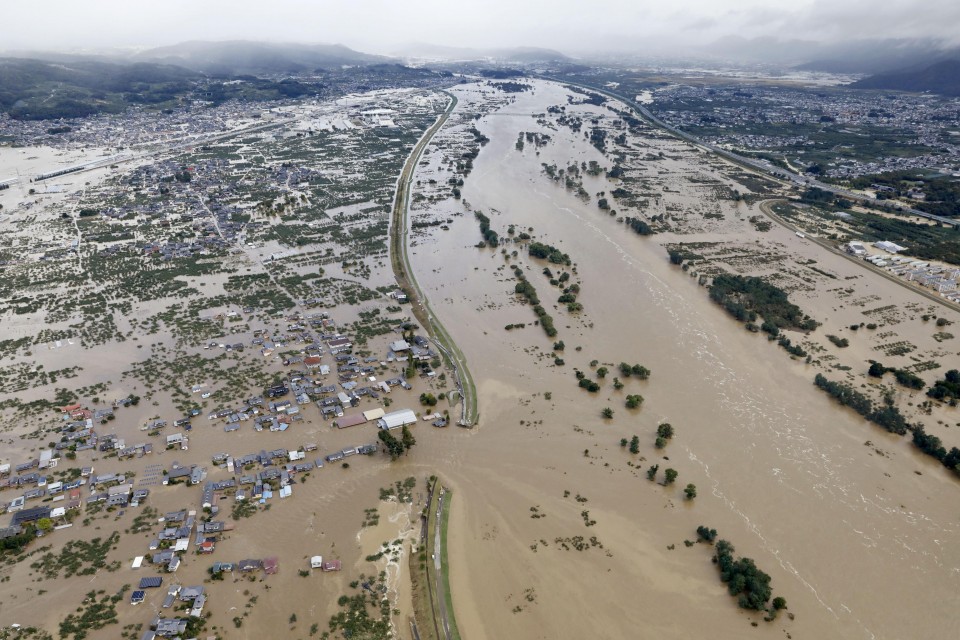 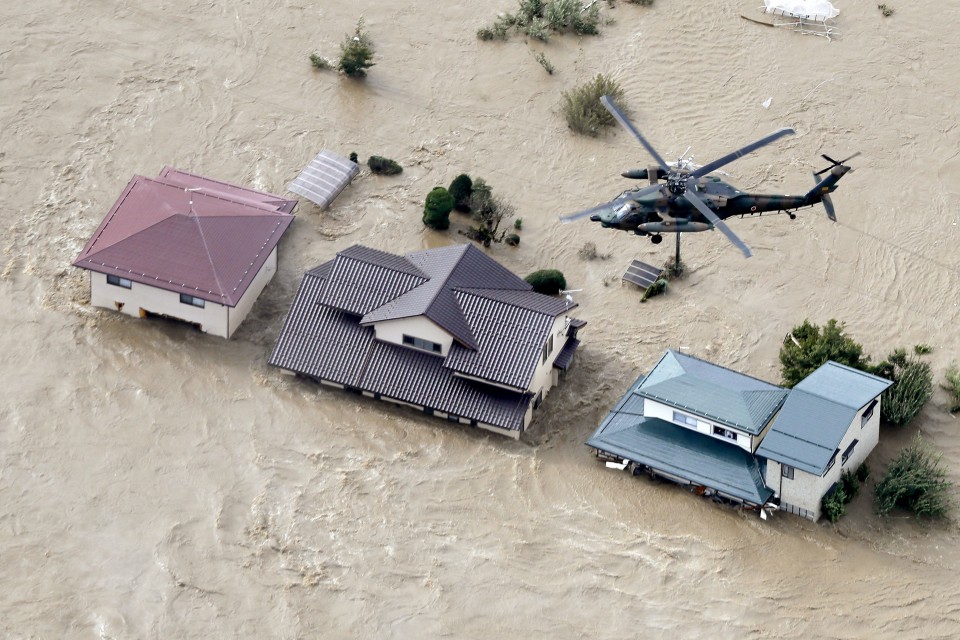 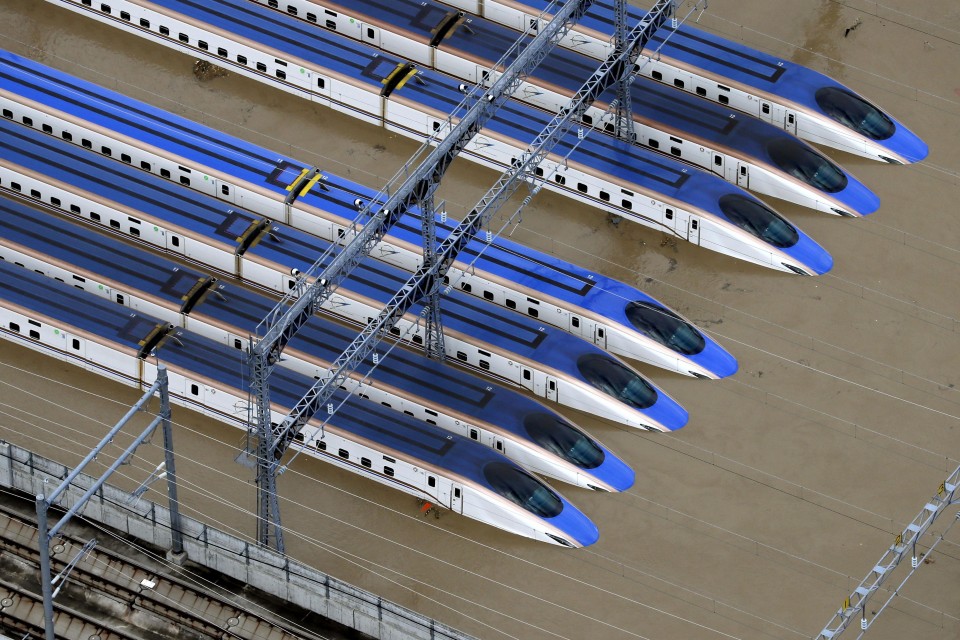 As the collapse was confirmed by around 3 a.m. and many were asleep at the time, the death toll could increase.

Ten rows of bullet trains parked at East Japan Railway Co.'s railyard near Nagano Station, countless facilities and houses in the city and elsewhere were inundated by muddy water.

Rescuers used helicopters and boats to save stranded residents from their flooded homes, as some called for help from second-floor balconies.

But a 77-year-old woman in Iwaki, Fukushima Prefecture, died as rescuers of the Tokyo Fire Department, trying to save her by helicopter, dropped her to the ground from an altitude of about 40 meters as they failed to attach a hanger to the harness that she was in, it said.

As of 4 p.m., embankments of 21 rivers in Japan had collapsed, according to the infrastructure ministry.

"Water suddenly came from under the floor," said Shogo Kasama, 72, who protected himself by standing on a table after his house in Marumori, Miyagi Prefecture, was inundated up to two meters.

"I couldn't sleep at all," Kasama said, adding his 92-year-old bedridden mother managed to keep alive as her bed floated on the water. "The flood cut off roads and I can't even take her to hospital."

Many areas in Japan were swamped by record rainfall. In Hakone, a popular hot spring resort about 80 kilometers southwest of Tokyo, 922.5 millimeters of rain fell on Saturday, the highest total ever recorded in Japan over 24 hours. 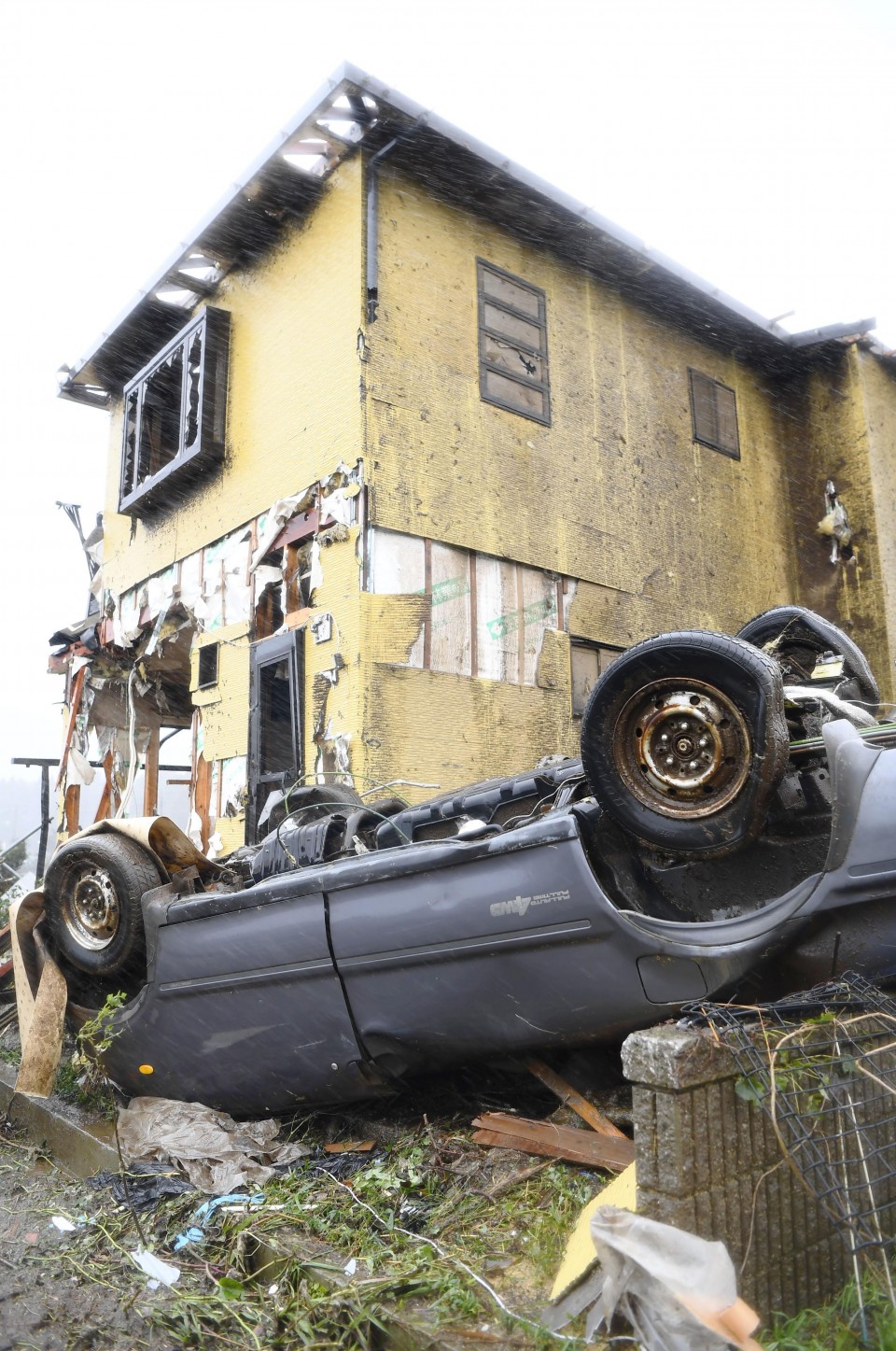 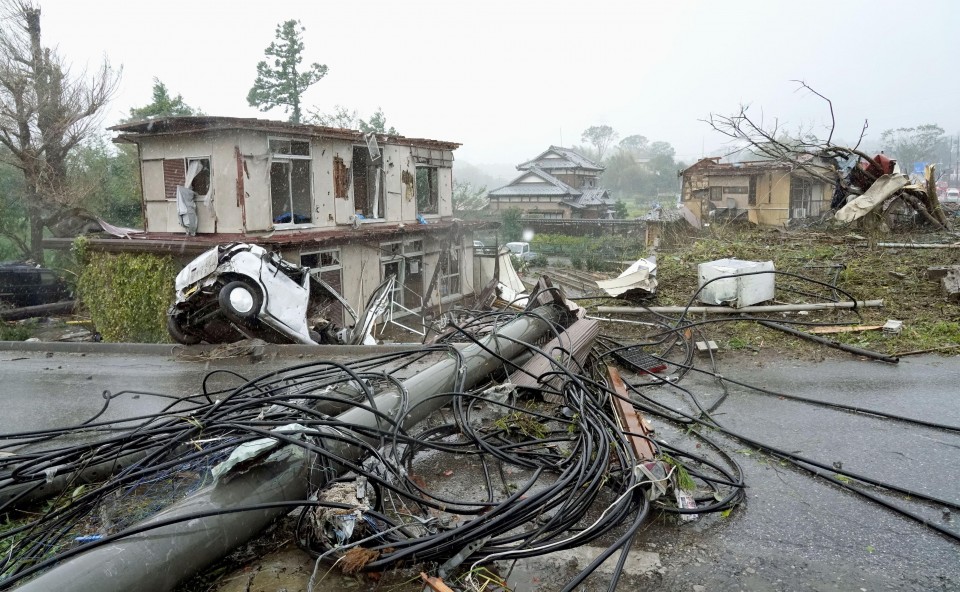 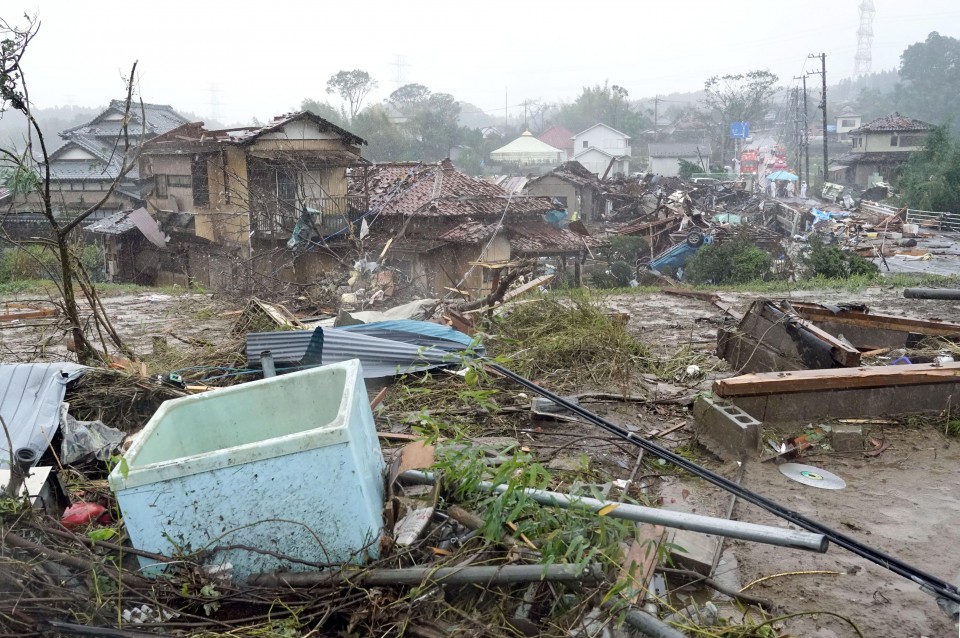 The government held a meeting of its major disaster management headquarters, during which Prime Minister Shinzo Abe said, "People's lives should come first and foremost. Utmost efforts should be made to rescue people from inundated houses and look for people whose whereabouts are unknown."

"Over 110,000 police officers, firefighters, coast guard officials and SDF personnel are currently engaged in rescue operations," Abe said. "I ask the people of Japan to remain vigilant against landslides and flooding rivers."

More than 6 million people across Japan's main island of Honshu were advised to evacuate, with train operators suspending most services and airports shut down in the metropolitan and surrounding areas between Saturday afternoon and early Sunday.

While evacuation advisories had been lifted by early Sunday in Tokyo and most of central and eastern Japan, the infrastructure ministry said at least 56 landslides and mudflows have been reported in 15 prefectures.

Chief Cabinet Secretary Yoshihide Suga told a press conference in the morning that 376,000 homes were without electricity and 14,000 had no running water after Typhoon Hagibis, meaning "swift" in the Philippine language Tagalog, made landfall on Japan's main island of Honshu before 7 p.m. on Saturday. 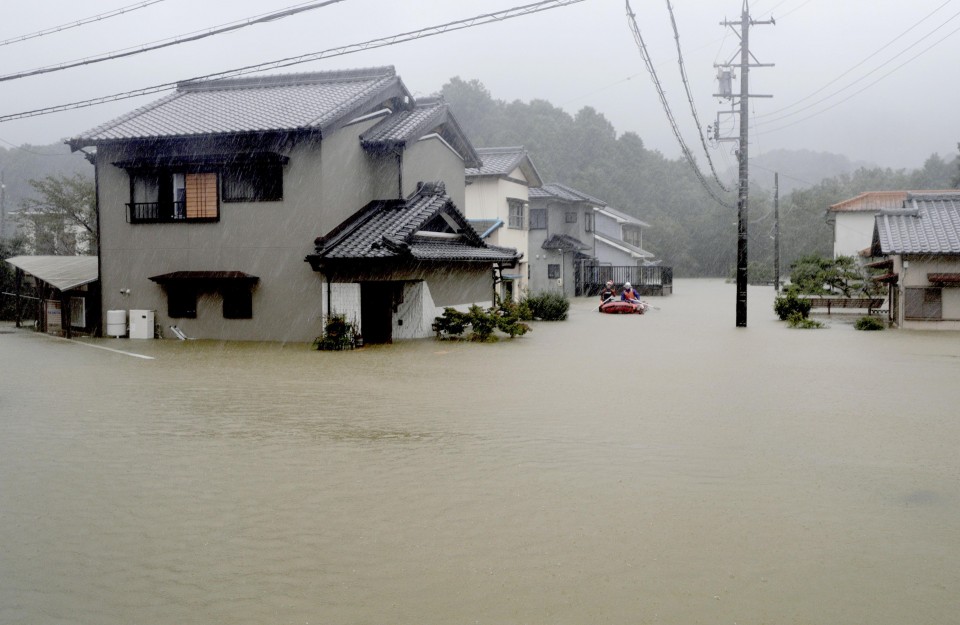 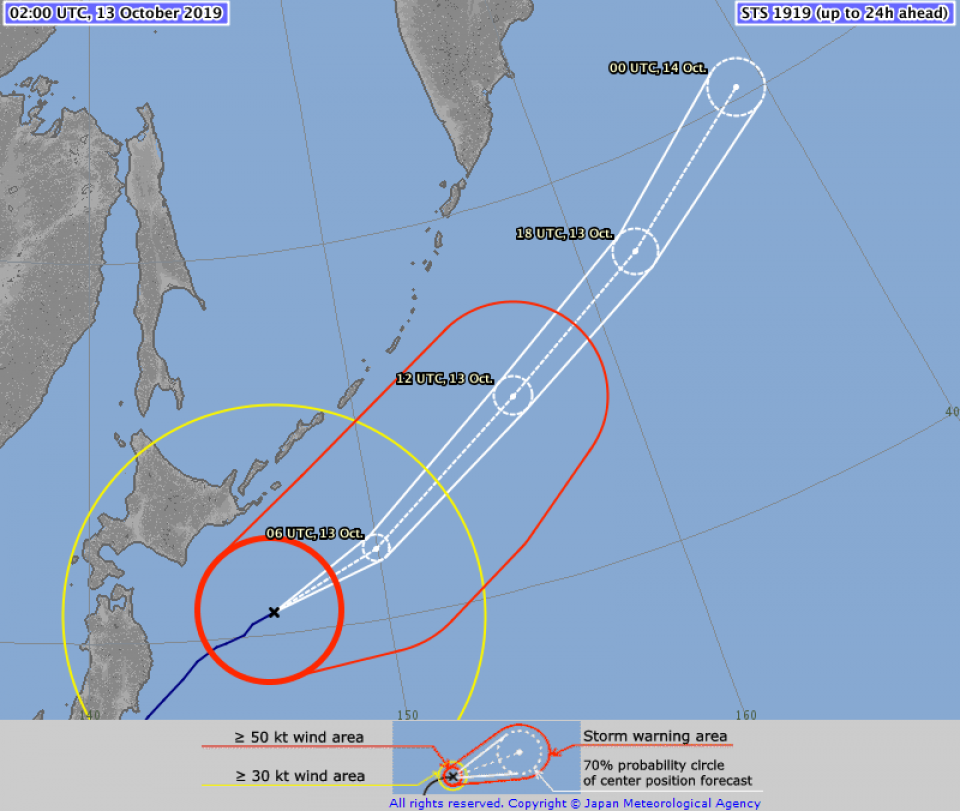 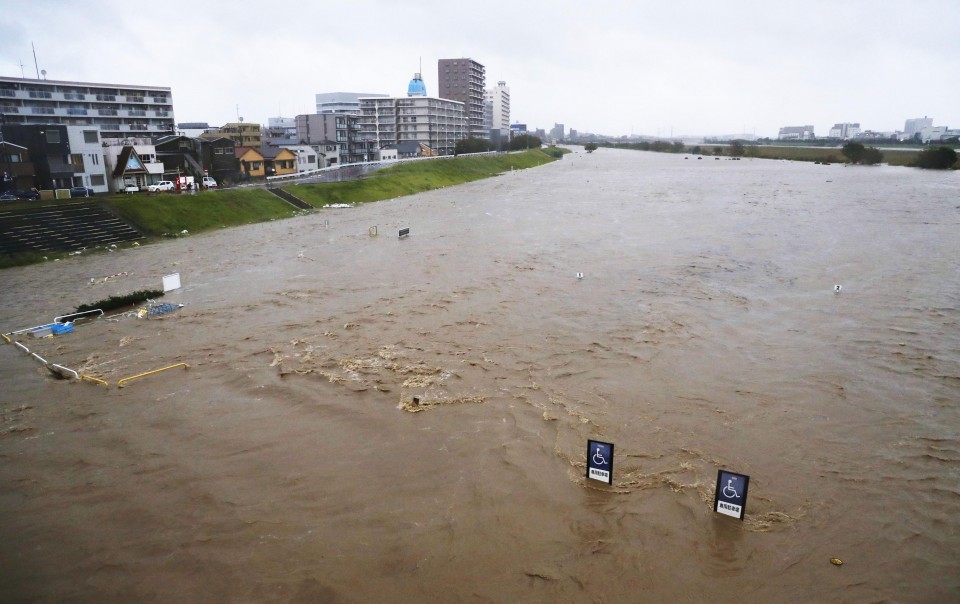 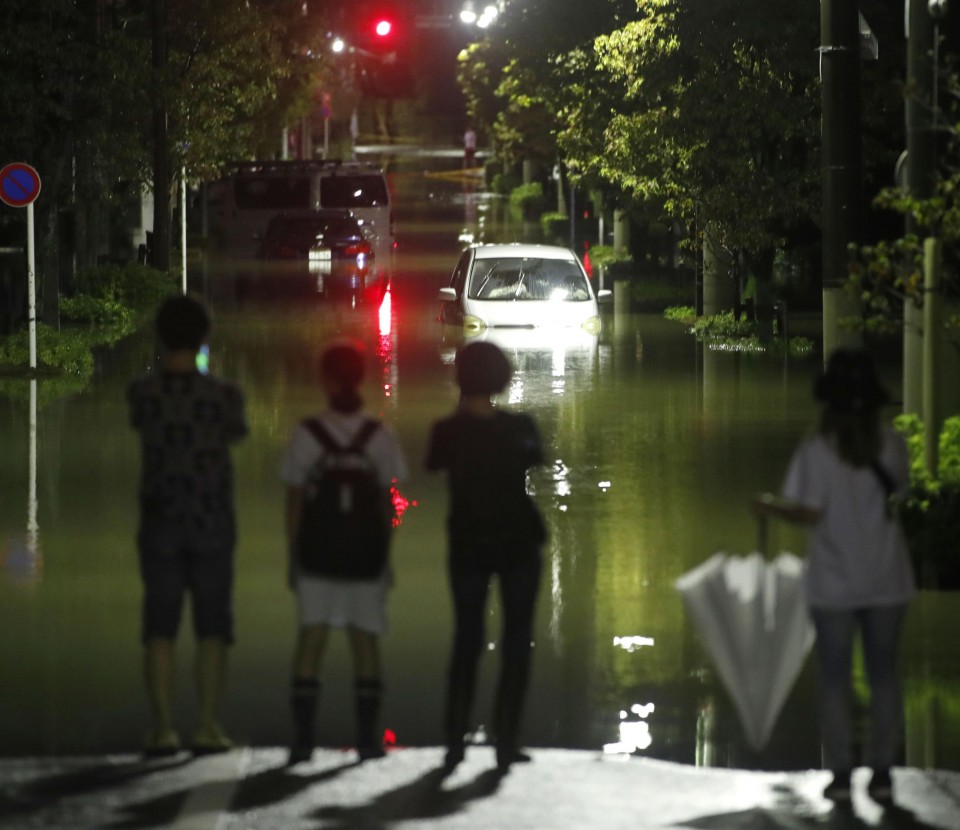 Among major events slated for Sunday, the Rugby World Cup match between Namibia and Canada in Kamaishi, northeastern Japan, was canceled to ensure the safety of players and fans.

The typhoon, which also injured at least 100 people, weakened to an extratropical cyclone off Japan's northeastern coast Sunday afternoon.

Most train services resumed operations following large-scale suspensions, while Japan Airlines Co. and All Nippon Airways Co. officials said most of their flights are expected to return to normal on Monday.

The Japan Meteorological Agency had issued the highest downpour warning on its one-to-five scale for Tokyo and the prefectures of Gunma, Saitama, Kanagawa, Yamanashi, Nagano, Shizuoka, Niigata, Fukushima, Tochigi, Ibaraki, Miyagi and Iwate.

As an emergency measure, some dams released water to avoid them bursting.

A tornado hit parts of Ichihara, Chiba Prefecture on Saturday, destroying 12 houses and damaging more than 70 others.

Local officials said a man in his 50s was found dead in an overturned car.

In Gunma Prefecture, four people died after houses were swept away by a landslide, police said. In Kawasaki, southwest of Tokyo, a man in his 60s was found in an inundated apartment and confirmed dead at a hospital.

According to coast guard officials, a Panamanian cargo ship with 12 crew members sank in Tokyo Bay on Saturday night, where there were strong winds and heavy rain from the typhoon.

Four crew members of the 1,925-ton ship, Jia De, were rescued Sunday morning, but five of them were later confirmed dead. The three others remain missing.

Suspension of trains, flights in Japan on Sun. due to typhoon