Japan's internal affairs minister Sanae Takaichi became the second Cabinet minister to visit the war-linked Yasukuni shrine during its autumn festival as a cross-party group of about 100 lawmakers also paid homage on Friday.

The visits came a day after Seiichi Eto, minister in charge of Okinawa and Northern Territories affairs, went to the Shinto shrine, drawing criticism from China and South Korea which see it as a symbol of Japan's past militarism.

"I came here as one Japanese citizen," Takaichi told reporters. "It's natural to pay respects and express appreciation to those who devoted their lives to a national policy in any country." She also made a ritual offering out of her own pocket. 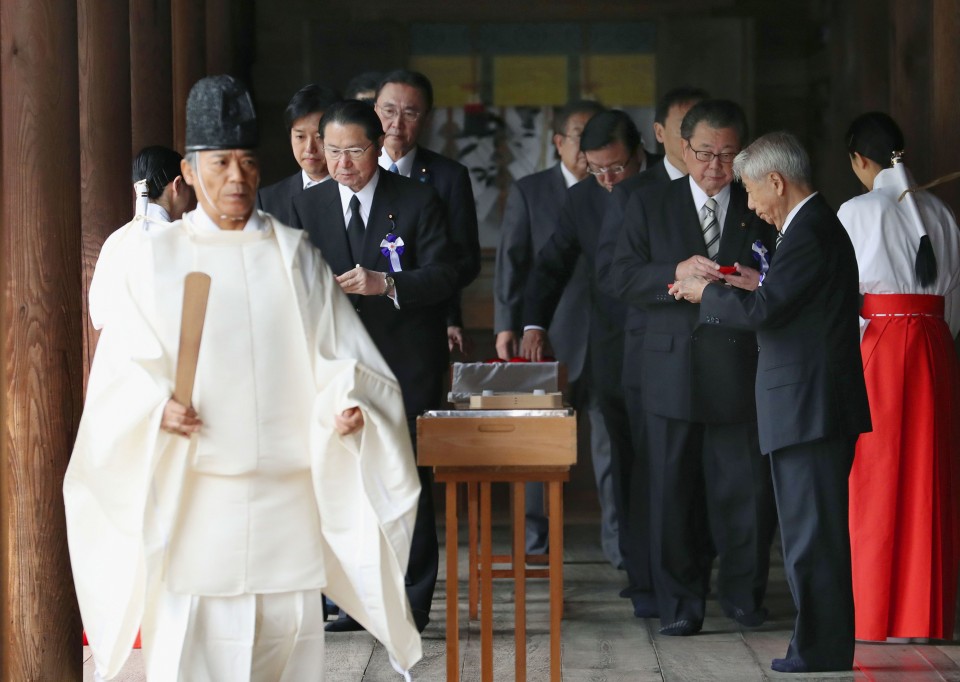 Both Takaichi and Eto are seen as having conservative views that are close to Prime Minister Shinzo Abe. Abe has refrained from visiting in person and sent a ritual offering instead on Thursday, the first day of the four-day festival.

The total number of lawmakers who went to Yasukuni as a cross-party group was larger than during the shrine's recent festivals last autumn and this spring, which each saw about 70 lawmakers visit.

Often a source of diplomatic friction with Beijing and Seoul that suffered from Japan's wartime aggression, Yasukuni shrine honors convicted war criminals such as wartime Prime Minister Gen. Hideki Tojo, along with over 2.4 million war dead. 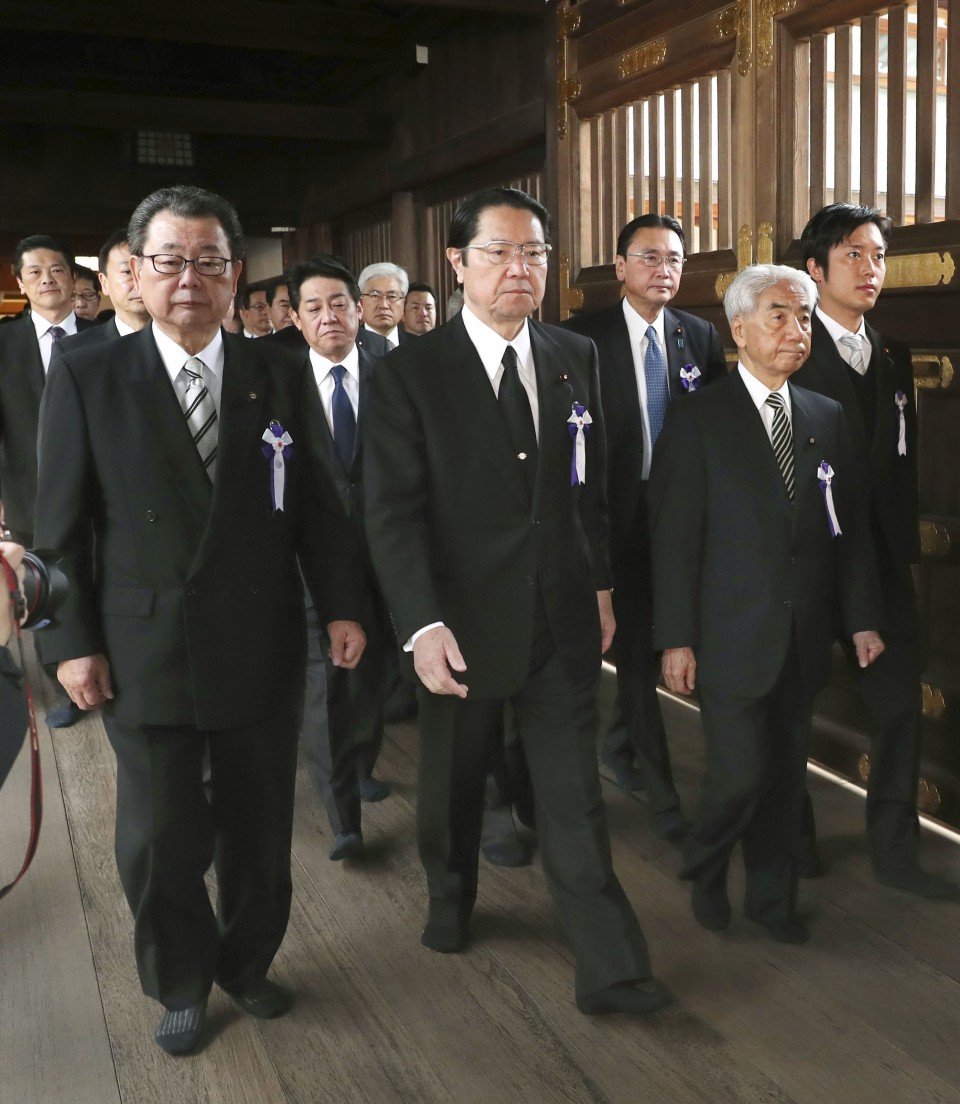 Past visits by Japanese politicians, including Abe in 2013, have angered Japan's Asian neighbors.

Eto, who assumed the current post in September, was the first Cabinet member to make a visit in over two years. "I visited the shrine as a private citizen and I don't think it will have diplomatic ramifications," Eto told reporters on Friday.

The festival comes at a time when Japan has seen ties with China thaw markedly but relations with South Korea worsen sharply over a dispute which dates back to World War II. 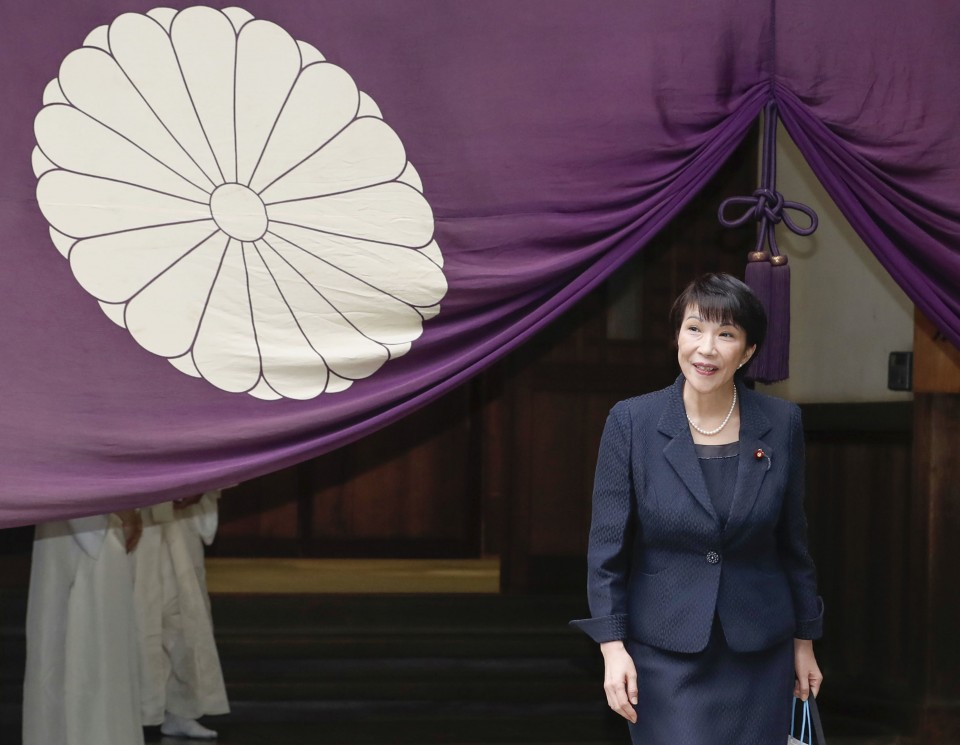 (Sanae Takaichi at the shrine)

China said Thursday that Abe's ritual offering and Eto's Yasukuni visit reflected their "wrong attitude" toward history -- a form of words less harshly critical than in the past.

South Korea, meanwhile, expressed its deep regret, but it did not step up its criticism ahead of South Korean Prime Minister Lee Nak Yon's visit to Japan next week for Emperor Naruhito's enthronement ceremony on Tuesday. Arrangements are being made for Abe and Lee to meet.

Ties between Tokyo and Seoul have sunk to the lowest level in years since a series of court rulings in South Korea last year that ordered Japanese firms to compensate for wartime labor during Japan's 1910-1945 colonization of the Korean Peninsula.

The rulings run counter to Japan's position that the issue of compensation was settled finally and completely in a 1965 bilateral agreement.

Abe has said Japan should continue dialogue with South Korea despite the recent spat, but he also reiterated that it is Seoul that should remedy the situation.