France had to overcome a tenacious challenge from Tonga on Sunday before booking their place in the Rugby World Cup quarterfinals with a 23-21 victory.

With the Pacific islanders scoring three tries to two in the Pool C clash at Kumamoto Stadium, French flyhalf Romain Ntamack kicked three penalties and two conversions to help his side maintain their record of reaching the knockout stage of every World Cup.

The nail-biting win by Jacques Brunel's men consigned Argentina to their first pool-stage exit since 2003, while setting up a tantalizing showdown against England on Saturday to decide the winner of the tournament's "pool of death."

After speaking of wanting to channel the "samurai spirit," the Tongans did exactly that, giving themselves the chance to pull off a second historic World Cup upset against France following a try to Zane Kapeli in the dying minutes.

Aiming to repeat their win over Les Bleus at the 2011 World Cup, the Tongans withstood a dominant first half from France to go into the break down just 17-7. Toutai Kefu's men then stunned the world No. 7 side by opening the scoring after the break. 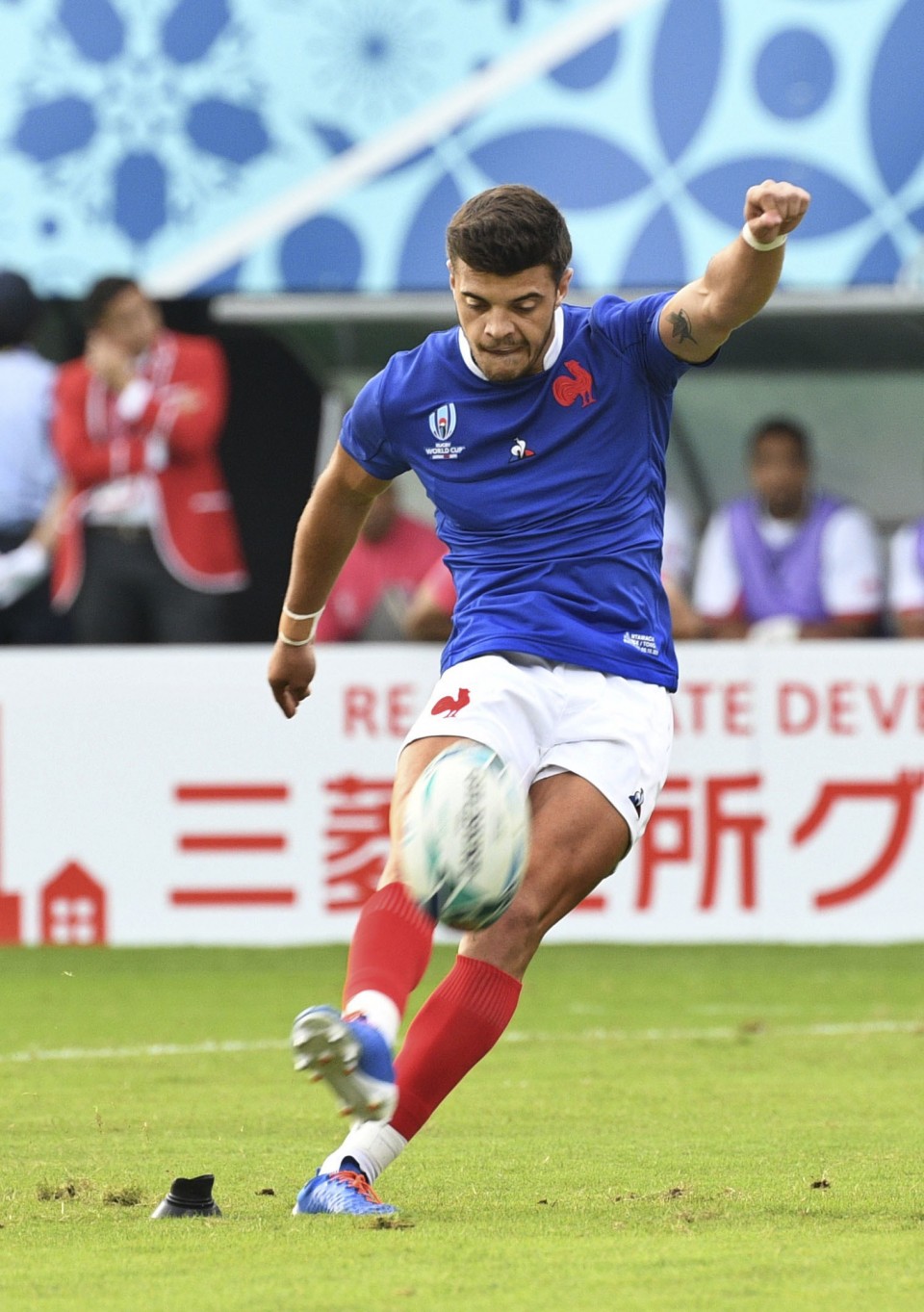 (Romain Ntamack kicks a penalty to open the scoring)

Kefu said his team came into the second half with confidence, knowing they had yet to play to their potential against the Six Nations side.

"I think just after halftime the boys realized that even though we played poorly we were still in the game, and we had 40 minutes to turn that around," he said.

France had looked to put the Tongan lineout under pressure early, with Ntamack and fullback Maxime Medard kicking deftly to find touch in attacking territory.

Ntamack put his side on the board with an easy kick after Tonga were penalized for offside just three minutes into the match.

Winger Alivereti Raka broke the line to set up France's first try two minutes later, sidestepping into the open field before offloading for fellow Fijian-born outside back Virimi Vakatawa to touch down near the posts.

"I'm happy playing next to another Fijian," Raka said. "We talk the same language, so it's easy for us."

Another moment of brilliance from man-of-the-match Raka yielded France's second try in the 31st minute. With scrumhalf Baptiste Serin playing a quick tap from a penalty, the winger sprinted down the blind side before gathering his own kick to score in the corner.

But 'Ikale Tahi fought their way back into the match, with scrumhalf Sonatane Takulua sneaking over right at the end of the half to cut the deficit to just 10 points.

The second half opened with a huge momentum shift, with France having a try overruled before conceding at the opposite end moments later.

Referee Nic Berry waved away an apparent try from French flanker Charles Ollivon after the television match official identified a forward pass in the lead-up play. 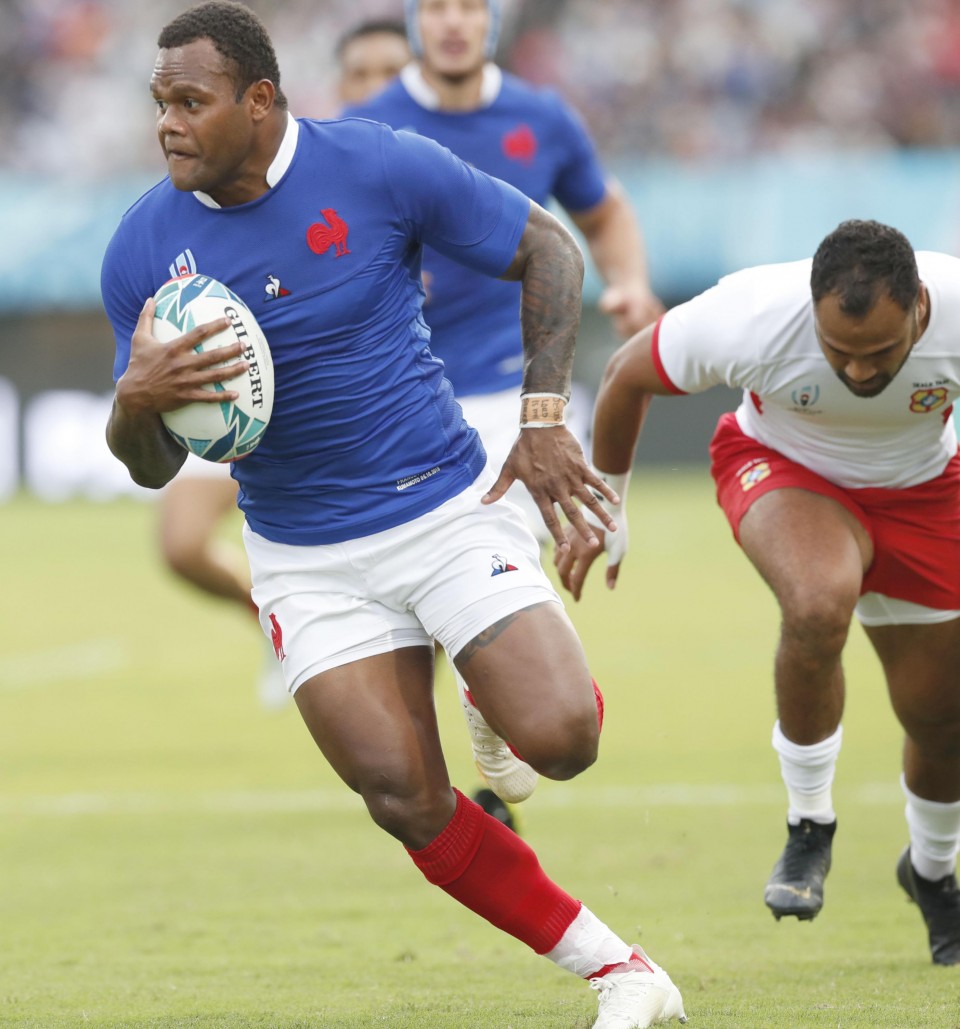 The Tongans then brought the crowd to their feet by running 75 meters to score, with inside center Malietoa Hingano touching down following a superb kick ahead by winger Cooper Vuna.

With Takulua adding the extras, the teams were separated by just a kick at 17-14.

Ntamack gave France some breathing room, pushing the lead out to 23-14 with a pair of well-struck penalties.

France looked to have sealed the deal when Damian Penaud crossed the try line, but the TMO once again overturned the five-pointer on account of a knock-on.

After a sensational break, Tongan No. 12 Siale Piutau was brought down just short of the try line, but Kapeli touched down in the corner after the men in red kicked wide.

The try set up an electric final two minutes, with the crowd willing the Tongans on. But the French stayed composed and kicked for touch to secure the win.

French captain Jefferson Poirot said the team had achieved their first objective of securing a quarterfinal berth, but were firmly focused on the upcoming grudge match against Six Nations rivals England.

"The game against England is going to be important for us. We have to prepare ourselves well to play against Wales or Australia in the quarterfinal, but first we must face England. I think we are going to play well," the 26-year-old loosehead prop said.

Following three-straight losses, Tonga will have one last opportunity for a win at the tournament against the United States on Oct. 13.

But for Tongan supporters, the result will not be important provided the players continue to give their all, according to Kefu.

"Our family and friends, our supporters, they're a loyal bunch. The result is really not that important for them. As long as we put a performance on the field that they're proud of, and give absolutely everything, that's all they care about."