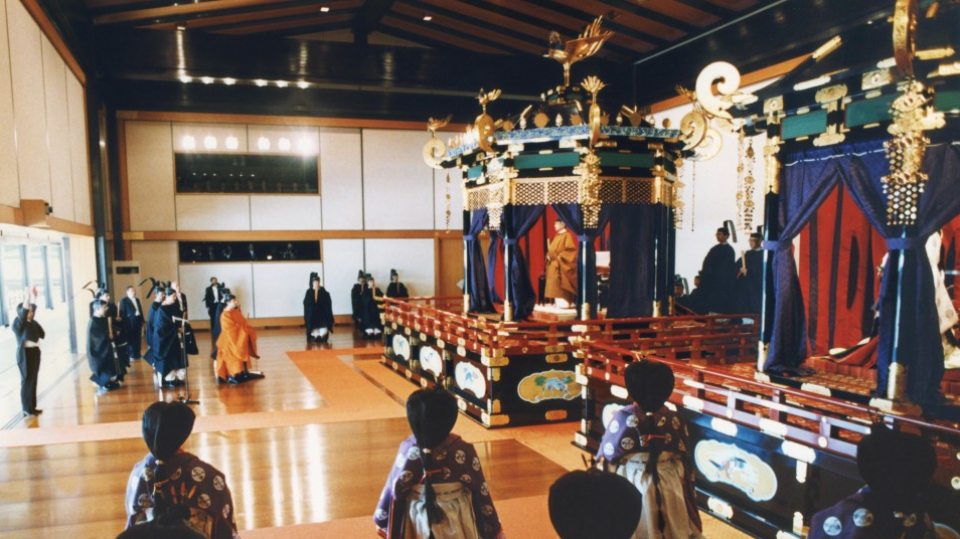 TOKYO - For Emperor Naruhito's enthronement ceremony on Tuesday, changes may need to be made to the positioning of both officials and items in the event of inclement weather, according to the Imperial Household Agency.

The 59-year-old emperor will declare his enthronement in the "Sokuirei Seiden no gi" -- an ancient ceremony equivalent to a coronation -- from a 6.5-meter-high canopied throne, known as the Takamikura, within the Imperial Palace in Tokyo before some 2,000 guests from Japan and over 180 countries in adjoining hallways.

Under the current plan, ceremonial officials carrying swords and bows, together with drum and gong players, will line up outside in the courtyard, which is to be decorated with colorful flags and spears. 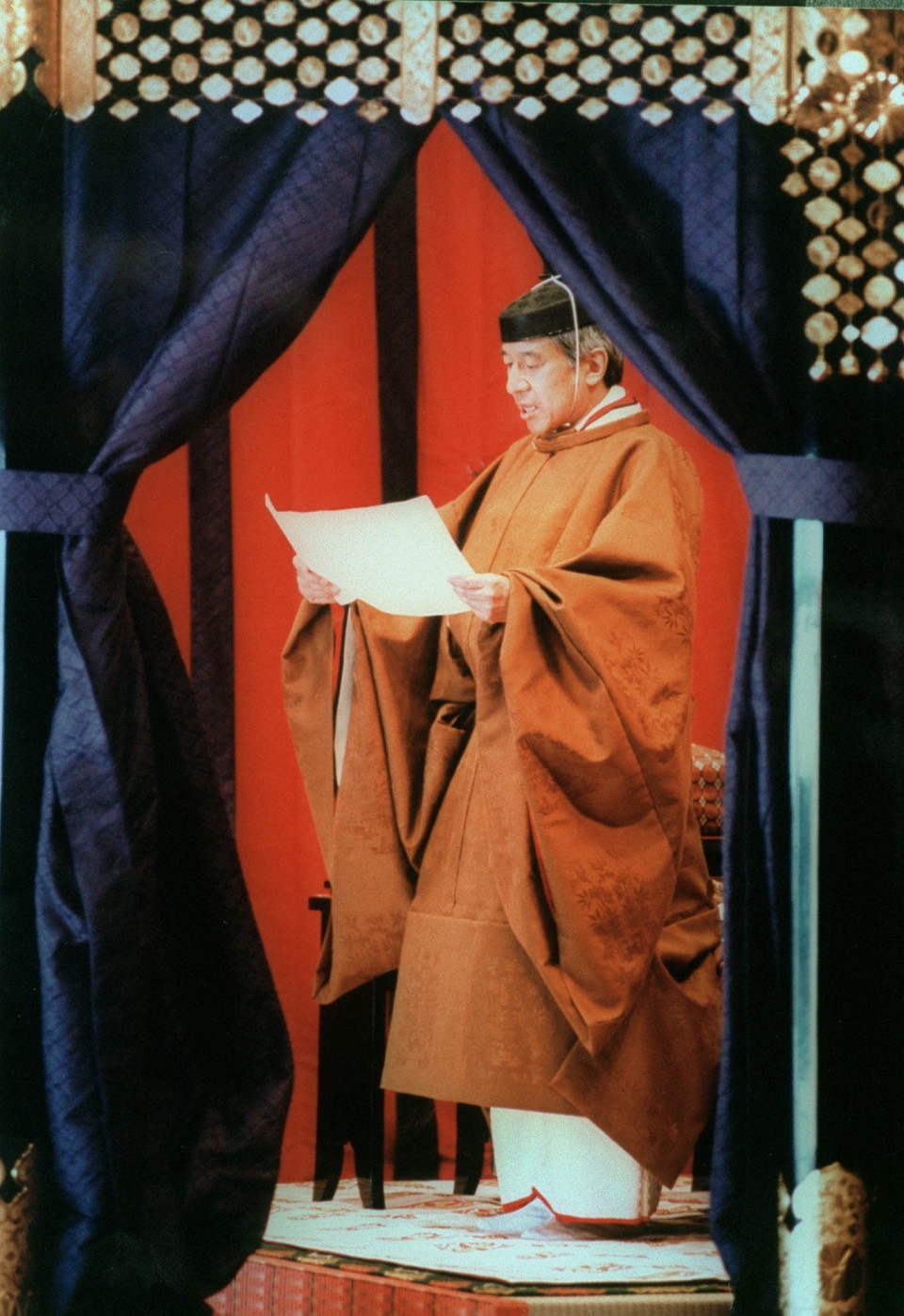 But the officials may have to move inside to the hallways while the flags, of varying sizes, may be removed altogether if the weather is bad. A high chance of rain has been forecast for Tokyo on Tuesday.

The 30-minute ceremony will be conducted from 1 p.m. in the "Matsu no Ma" state room, the palace's most prestigious hall, with the emperor ascending to the decorative throne.

As the curtains of the Takamikura open, the emperor, dressed in traditional Japanese attire, will stand and deliver a speech. Prime Minister Shinzo Abe will then convey "yogoto" felicitations from the floor of the state room and lead the guests in three banzai cheers to wish longevity for the emperor.

The clothing to be donned by the ceremonial officials and the objects they hold are vulnerable to rain, while the flags may fly away in strong winds. The agency is therefore considering reducing the number of officials and moving them indoors. 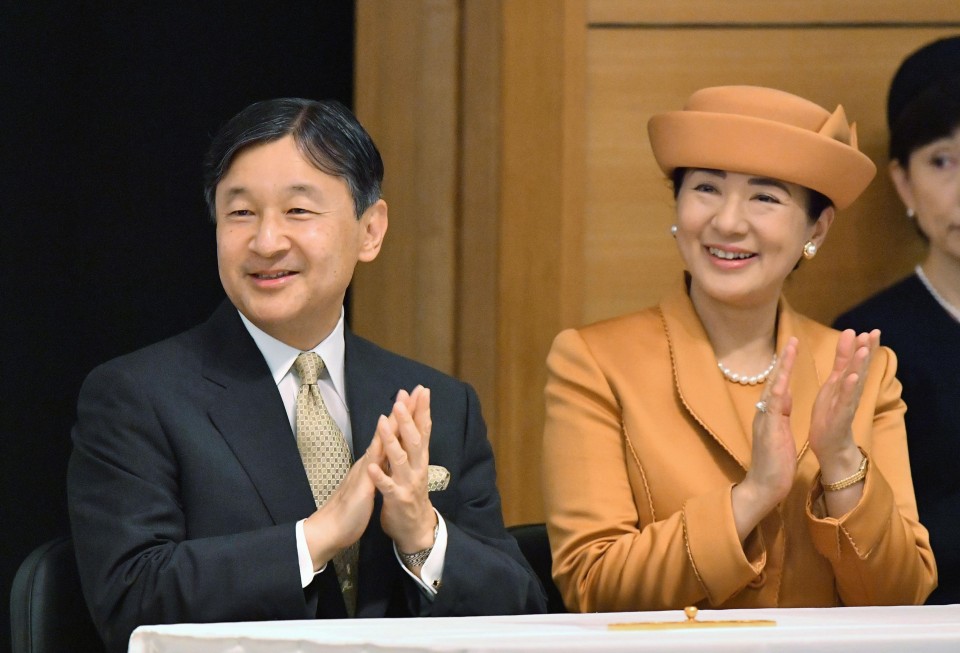 The decision will be made Tuesday morning but an agency official said it will be "quite difficult" to judge what extent of rain and winds would require changes to be made.

The National Police Agency said up to 26,000 police officers will be mobilized for the ceremony and its related events through Thursday.

The imperial couple were originally scheduled to appear in a parade following the ceremony, but the event was postponed until Nov. 10 in the aftermath of a deadly typhoon earlier this month.

They will ride in a convertible along the approximately 5-kilometer route from the Imperial Palace to the Akasaka Imperial Residence in Tokyo in around 30 minutes from 3 p.m. It would be canceled in the event of poor weather, with no other date yet planned.

Dignitaries from 183 countries and international organizations who are expected to attend the ceremony include royalty such as King Willem-Alexander of the Netherlands, King Philippe of Belgium and King Felipe VI of Spain, as well as Britain's Prince Charles and Bhutan's King Jigme Khesar Namgyel Wangchuck, according to the Foreign Ministry. 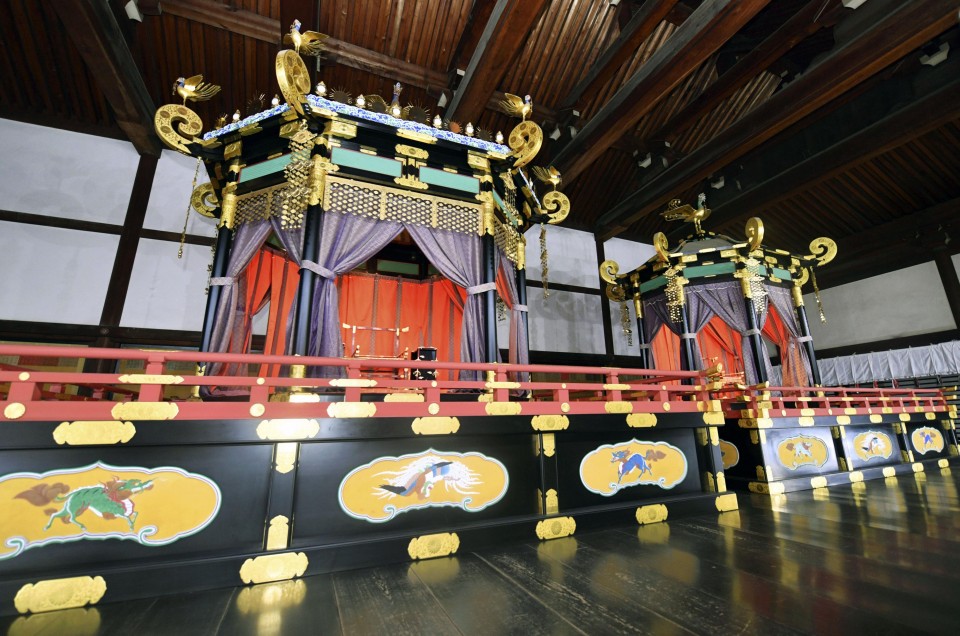 Emperor Naruhito succeeded to the Chrysanthemum Throne on May 1, the day after his father former Emperor Akihito abdicated, Japan's first monarch to do so in more than 200 years.

Similarly, a number of European monarchs have also recently relinquished the throne, with Dutch King Willem-Alexander ascending in April 2013 following the abdication of his mother former Queen Beatrix.

Belgian Prince Philippe succeeded to the throne following the abdication of his father King Albert II in July 2013. The Japanese imperial family and the Belgian royal family are on friendly terms, with former Emperor Akihito and the late King Baudouin I having had a close friendship.

Emperor Naruhito is said to keep in touch by email with the Netherlands' King Willem-Alexander, 52, and a number of other overseas royals who are around the same age.

"They're probably sharing thoughts on matters which only a royal could understand," an aide to the Japanese emperor said.

A court banquet will be held Tuesday evening at the Imperial Palace, where the emperor and Empress Masako will greet the invited guests.

The following is the lineup of major foreign dignitaries by region who are expected to attend Emperor Naruhito's enthronement ceremony on Tuesday, based on a list provided by the Japanese government. More than 170 countries and international organizations will send representatives to the event.

-- Democratic Republic of the Congo