Akira Yoshino, a winner of this year's Nobel Prize in chemistry, said Thursday there is always a goal to be reached in research, as he expressed his joy with his wife at a press conference.

"There is always a goal somewhere and you will always find a treasure there," said the honorary fellow at Japanese chemical company Asahi Kasei Corp. and professor at Meijo University, comparing research with running a marathon.

"If you can have confidence in that, and if you believe that you can get over difficulties, however tough they are...and if you get over those difficulties, at a certain point, you will feel joy," Yoshino said, referring to a "runner's high."

"Hitting a wall, and getting over it means you are one step closer to your goal," he said.

Yoshino, 71, encouraged researchers to have a "rebellious spirit with a desire to do something that others never do."

Wearing a dark suit with a blue tie, Yoshino said he was "surprised" by the level of congratulations he had received in Japan. His wife Kumiko, 71, said she was "incredibly happy."

Yoshino apologized to his wife at the news conference, saying, "I brought you trouble when I was going through difficult times in my research. Acknowledging the hardships, I would like you to enjoy the prize with me."

"Thank you very much for the most wonderful present," she replied.

The reality of winning this year's Nobel Prize in chemistry on Wednesday hit Yoshino when he saw all the newspaper reports on the award that he shared with two others for their contributions to the development of lithium-ion batteries.

"Every newspaper had a front-page article about it. It was then that I thought 'This is for real,'" said Yoshino.

The prize was shared with America's John Goodenough and Britain's Stanley Whittingham. The lithium-ion battery brought about a revolution in people's lives, the Royal Swedish Academy of Sciences said, being used in a range of devices including smartphones and laptop computers.

Goodenough, 97, who holds the Cockrell Centennial Chair in Engineering at the University of Texas at Austin, is an inspirational figure for Yoshino. Earlier Thursday, the Japanese scientist told Kyodo News, "I will continue research as long as I am alive" like the American chemist.

Speaking to media earlier on the battery's widespread use, Yoshino said, "Ninety-nine percent of me didn't expect it but 1 percent of me thought maybe it might happen." 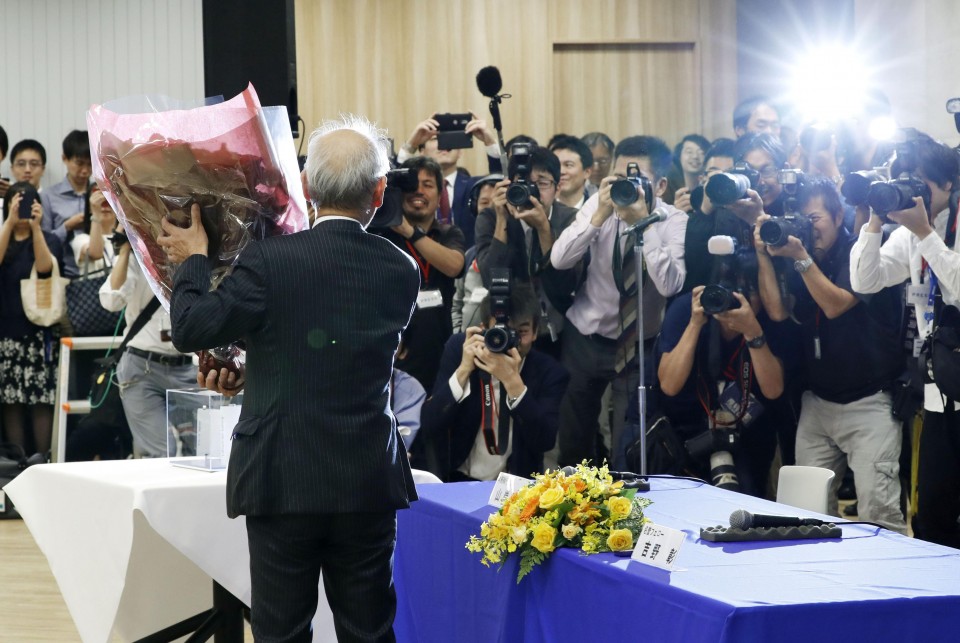 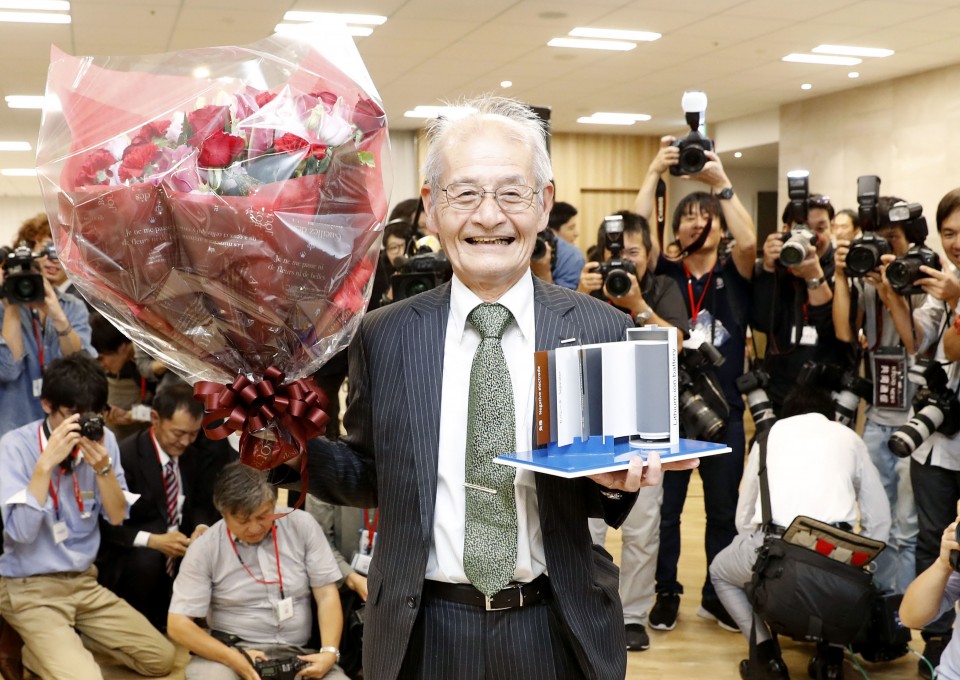 Ironically, Yoshino only got a cellphone five years ago having long been reluctant to use one.

Yoshino became the first Japanese corporate researcher to win the Nobel Prize in chemistry since Koichi Tanaka, a senior fellow at Shimadzu Corp., received it in 2002.

Giving a message to children during a media interview in the morning, he said, "If you have curiosity and experience many things, you will be sure to get a Nobel Prize."

Yoshino was later greeted as his Asahi Kasei office with the applause and cheers of around 500 employees. "Everyone's children must have been happy, saying their fathers' company is amazing. This gives me the most pleasure," he said.

The Nobel laureate first became interested in chemistry when he was a fourth grader after his teacher introduced him to "The Chemical History of a Candle," a collection of lectures by 19th century British chemist Michael Faraday.

The lectures used a burning candle to explain chemistry to young people and science novices at that time. Yoshino immediately bought the book and immersed himself in it.

"Why do candles burn? Why are the flames yellow? What are the wicks for? I thought this seems kind of fun," he said Wednesday.

His curiosity led him to study and experience different things throughout his life. Yoshino entered Kyoto University's Faculty of Engineering, but he first delved into archaeology there, happily excavating ruins.

"It is better to be able to see things from different angles, not just from your field of expertise," Yoshino said, adding that studying archaeology had been "useful" in making him aware of how times change.

In 1972, he joined Asahi Kasei's predecessor to do research. But his research and university teaching have not prevented him from enjoying life outside of his field. 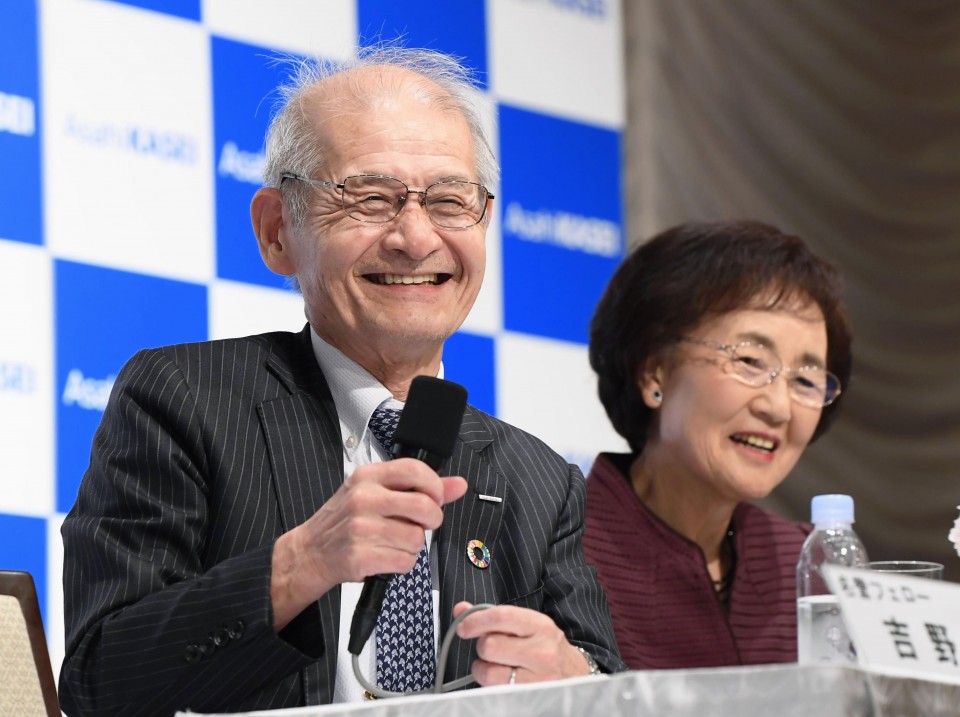 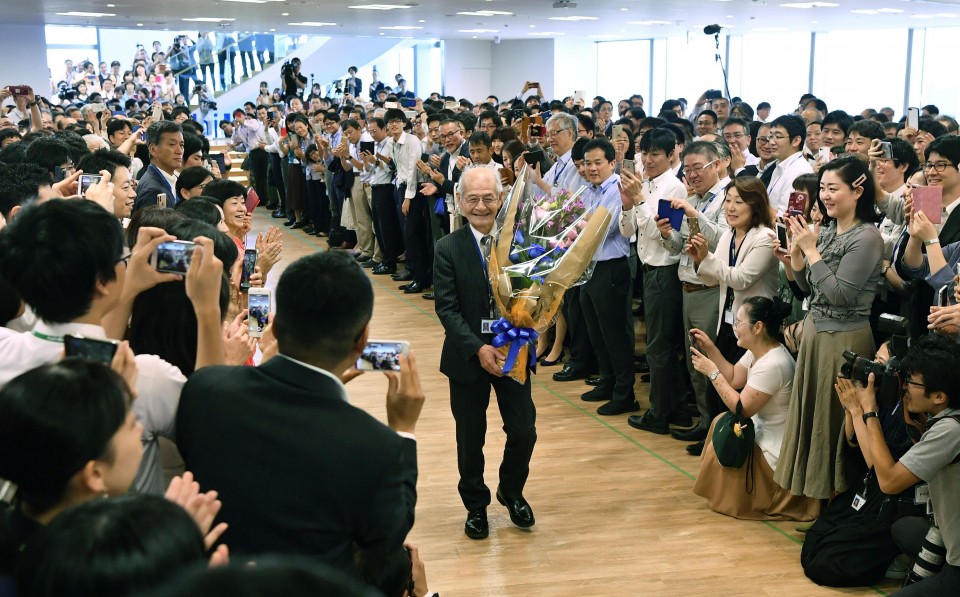 He never talks about his job at home, according to his wife who married Yoshino in 1973. The couple go on walks and play tennis on weekends.

Yoshino met his wife while studying archaeology and they have two daughters and a son.

"There is too much of a gap between when he's at home and when he's out," his wife joked with reporters Wednesday night. "He frequently lolls around the house."

Yoshino says that it is important to have downtime. He says he came up with an idea that led to the development of lithium-ion batteries one free afternoon after cleaning up his lab.

"It's not easy to find answers to research questions if you think only about your field of expertise. It is important to expand your views by being interested in different things," he told reporters Wednesday.

Yoshino said he will be "very busy for the next few months" until December, when he will receive the prize in Stockholm. "But I want to do my best," he added.