Speaking the day after the Brave Blossoms were knocked out of the tournament via a 26-3 defeat to South Africa, Joseph said "the team had worked incredibly hard for the last three years."

"This year we worked harder than ever before and that put us in a good position to strive for our goal, which was to get into the top eight at the World Cup."

Sitting on a stage alongside his squad, Joseph said there "are 31 players here and one coach but there are a lot of coaches and support staff behind the team that allow us to be as successful as we have been."

He also paid tribute to the players that did not make the World Cup squad, saying they "had contributed just as much." 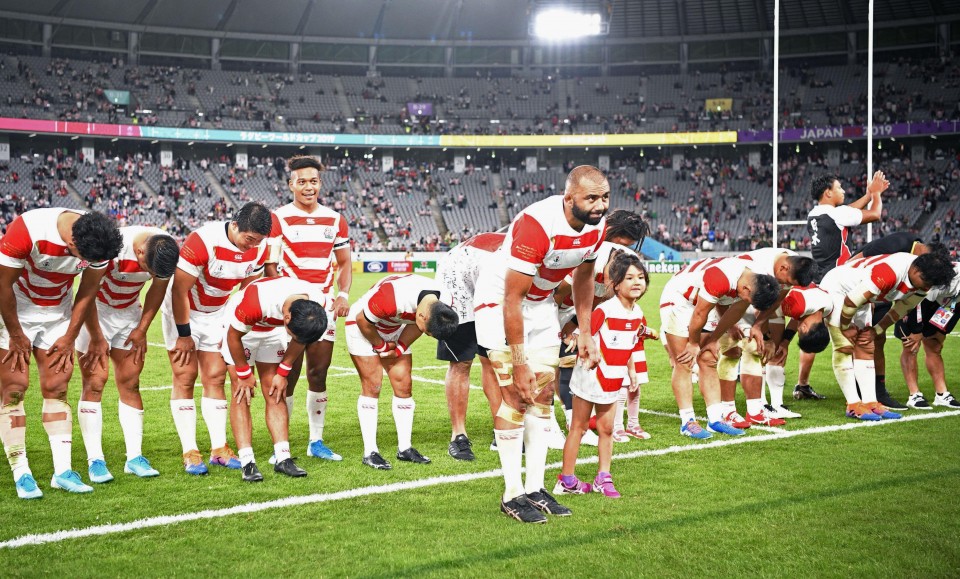 (Captain Michael Leitch (C) and other Japan players bow to fans after their team's 26-3 loss to South Africa in a Rugby World Cup quarterfinal in Chofu, western Tokyo, on Oct. 20, 2019.)

Joseph's future with the national team remains in doubt due to difficulties that have arisen regarding his proposed contract extension, according to sources.

But no matter what happens next, he wanted to make sure he thanked the nation for their support and the players for their belief in what he was trying to achieve.

"It takes time to get coordinated and build trust," he said. "But when you do build trust and come together then you can achieve great things, and that's what I am proud of."

Michael Leitch echoed his coach, saying the team's unity played a big role in their ability to go through the pool stages unbeaten, defeating two Tier-1 sides along the way.

"I'm proud to be the captain of this team," he said. "I'm happy we made the best eight. The reason we got this far is because Jamie united us and made us one team."

That unity was displayed when the players were asked to name their favorite moment of the tournament.

Center Ryoto Nakamura praised the work of Yoshitaka Tokunaga and the four other players who did not get any playing time. He said their support of the team's cause in training and their efforts relaying messages and as water boys during the games were important.

Prop Keita Inagaki talked of a scrum in the first half against Ireland when the Japan pack forced a penalty, while flanker Pieter Labuschagne said Inagaki's try against Scotland, his first in a test match, was the highlight because the "whole team did their job" in the build-up.

Four years ago, the Japan Rugby Football Union failed to ride the momentum of Japan's success in England and the players spoke of their hope that this time around things would be different.

"When we came back from New Zealand after the 2011 tournament there were only two or three reporters so it's unbelievable to see so many of you here today," hooker Shota Horie said of the press conference which was broadcast live on TV.

"It's our mission to work toward the next World Cup and keep up the popularity of rugby. What matters is how much stronger and better we can get from here on."

Flyhalf Yu Tamura, who broke a rib during the defeat to South Africa, said he had "realized through this tournament that we're capable of doing our very best and becoming the national team that everyone admires and wants to join."

"We've set goals and achieved them. Not every team can do that and I'm proud."