The sole yokozuna in action at Tokyo's Ryogoku Kokugikan was defeated by the May tournament winner, No. 2 maegashira Asanoyama (3-2), who earned his first kimboshi prize for defeating a grand champion as a rank-and-filer while evening their head-to-head record at one apiece.

In the final bout of the day, Kakuryu latched onto Asanoyama's belt and attempted an underarm throw. But the maegashira resisted and spun Kakuryu around, moving the off-balance yokozuna to the edge of the ring and over the straw.

With the upset loss, Kakuryu faces an obstacle in his bid to claim a second straight title in the absence of fellow grand champion Hakuho, who has pulled out of the 15-day meet with a broken finger. 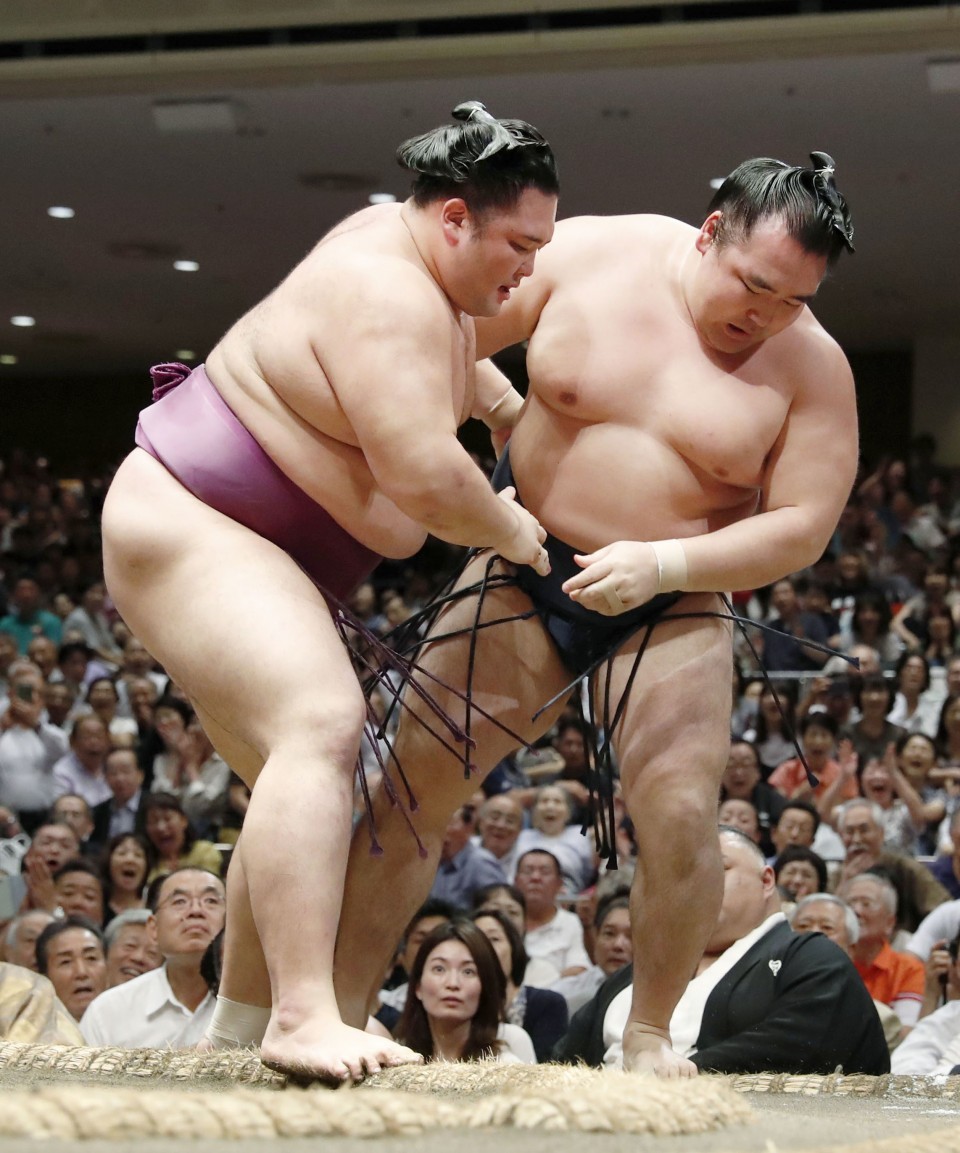 In earlier matches, Takakeisho (5-0) hit the halfway mark on the road to regaining ozeki status with a win against No. 1 Hokutofuji, who took his fourth straight loss since beating Hakuho on opening day.

The young sekiwake, who needs 10 wins to return to ozeki, gained the early momentum with a huge hit in the opening clash. He then sidestepped his lunging his opponent before slapping him down, all while nimbly maintaining his footing just inside the edge of the ring.

Okinoumi also retained his share of the lead with a slap-down win over No. 9 Kotoyuki (2-3).

The No. 8 maegashira, a three-time runner-up and former sekiwake seeking his first top-division title, pushed Kotoyuki back at the initial charge, then maneuvered back while slapping his opponent to the sand.

Among the ozeki, who both require at least eight wins here to keep their position at sumo's second highest rank, Goeido (4-1) deflected a thrusting attack from No. 3 Daieisho (1-4) to stay within reach of the Emperor's Cup.

Tochinoshin (2-3) bounced back from an unfortunate result on Day 4 by taking down No. 3 Tomokaze (2-3). The pair collided heavily in their first top-division matchup before the Georgian moved to the side and pulled the maegashira down.

Mitakeumi defeated komusubi Abi (3-2) and improved to 4-1. Abi appeared to have Mitakeumi on the ropes with some stiff arms to the neck and face, but was pushed aside by the sekiwake and thrusted down.

Endo earned his fourth straight win after pushing out winless No. 1 Aoiyama. Fighting as a komusubi for the first time since last year's Summer meet, Endo dug in low against the big Bulgarian, turning him around and quickly sidling him off the dohyo.

Before the start of the day's bouts, No. 2 Ichinojo (1-4) pulled out of the tournament with a right shoulder injury he suffered in his match with Kakuryu the previous day.

The Mongolian-born former sekiwake is not expected to return for the rest of the 15-day meet, according to his Minato stablemaster.