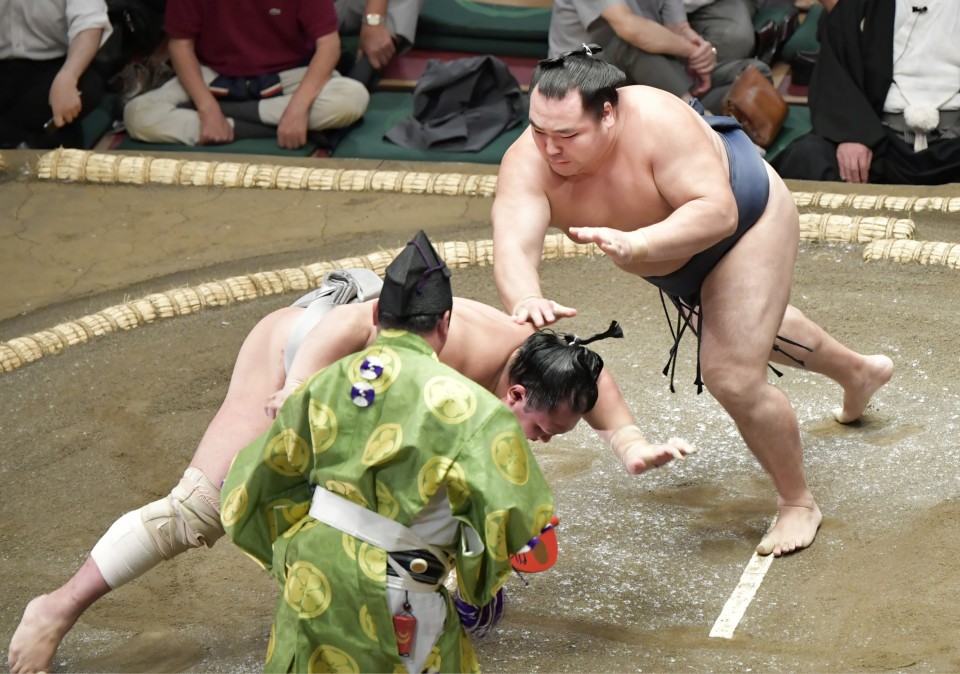 Closing out the second day of action at Tokyo's Ryogoku Kokugikan, Kakuryu easily dispatched No. 1 maegashira Hokutofuji (1-1), who entered the ring extra fired up after delivering a shock opening-day upset to yokozuna Hakuho on Sunday.

Taking control at the initial charge, Kakuryu shoved Hokutofuji back and then slapped the former komusubi down to the side to quash his hopes of downing a second grand champion at the 15-day meet. Hokutofuji had beaten Kakuryu twice in four previous meetings.

Hakuho (0-2), who suffered his first loss on Day 1 of a meet since he was promoted to the sport's highest rank in 2007, pulled out of the tournament with a broken finger prior to action on Day 2 and forfeited his scheduled bout with komusubi Abi (1-1).

The 34-year-old Mongolian-born wrestler had first injured the finger at the Nagoya meet in July, but had been gunning for a record-extending 43rd top-division title in his first tournament since acquiring Japanese citizenship.

In other Day 2 bouts, Goeido put the spin on No. 2 Ichinojo (1-1) and muscled the 224-kilogram Mongolian over the straw for his second win -- of eight needed to avoid demotion. Goeido is still a loss behind Ichinojo in their 19 career match-ups.

His ozeki colleague Tochinoshin, also in danger of being demoted from sumo's second highest rank, suffered his second straight loss in a bout against No. 2 Asanoyama (2-0).

Tochinoshin locked onto Asanoyama's belt with his favored right-handed grip, but failed in several attempts to toss May's champion aside and was shoved out.

Takakeisho pushed out No. 1 Aoiyama (0-2) to remain undefeated in his bid to regain ozeki status. The sekiwake fended off Aoiyama's attempts to pull him down and proceeded to bulldoze the Bulgarian from the ring.

Mitakeumi bounced back from an opening-day loss with a victory over No. 3 Daieisho (0-2). Mitakeumi got the better of the initial charge and stayed aggressive against Daieisho, who banked on an all-out shove at the edge but was thrust down by Mitakeumi as the sekiwake executed a textbook dodge.

Fighting each other for the first time, komusubi Endo (1-1) overpowered No. 3 Tomokaze (1-1) to claim his first win here. Tomokaze tried to pull the fan-favorite down but was edged over the straw by Endo's shoves.

Among the rank and file, No. 14 Tsurugisho (1-1) suffered his first loss in the top division after getting thrown out by makuuchi returnee No. 15 Ishiura (1-1).

No. 11 Enho defeated No. 10 Meisei (1-1) to earn his second win in his third tournament among the sport's elite. The lightest man in the division fended off his opponent's attack and countered with an underarm throw to launch Meisei off the raised ring.

No. 15 Azumaryu -- who needed 30 tournaments, the second most of all time, to get back to the top tier -- also collected his second straight win by flinging No. 14 Toyonoshima (0-2) down to the sand with a belt throw.