The emblem of Japan's Brave Blossoms rugby team, which currently features three cherry blossoms in full bloom, started off life decades ago in a slightly different shape -- with one bud, one flower in half bloom, and one in full bloom. To this day, however, it remains a mystery as to why and how the triple sakura design evolved into its current form.

"I've been told my late grandmother was the one who came up with the initial design," a 70-year-old Kyoto resident revealed for the first time of his "Rugby Grandma," who ran shops selling sports goods in Kyoto and Tokyo during the early Showa period (1926-1989) and was well acquainted with members of the rugby community. 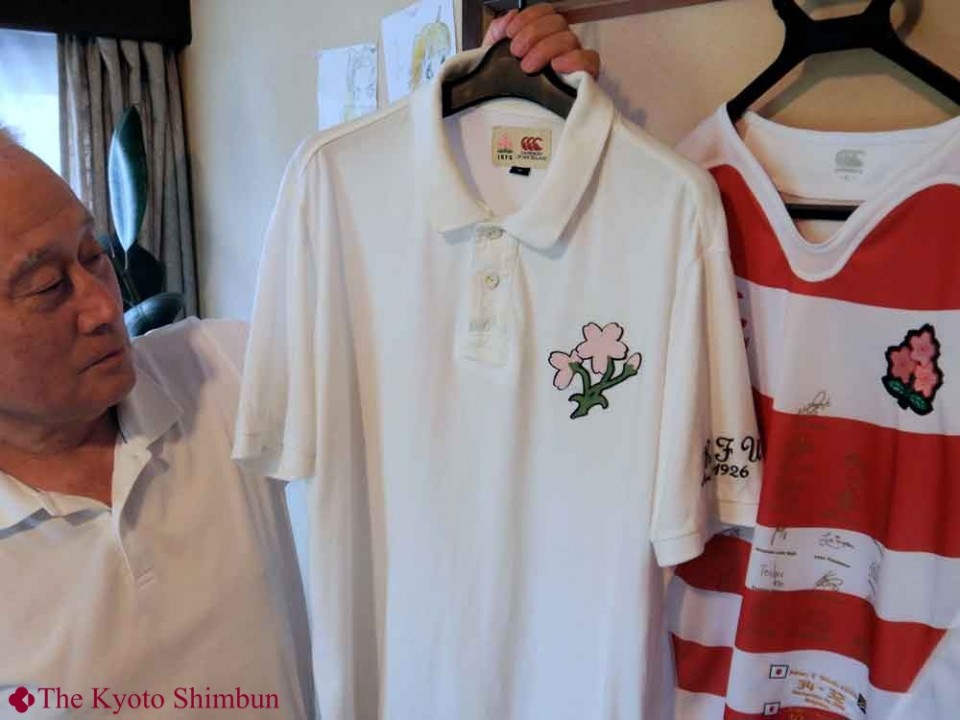 In September 1930, when Japan's national rugby team headed to Canada on its first overseas tour, the team jersey bore the cherry blossom emblem for the first time -- with a sakura bud, one in half bloom and one in full bloom -- over the left chest. The head coach at the time was Shigeru Kayama.

After World War II, the Japan team's first postwar test match was held in Tokyo in October 1952, playing against Oxford University. But this time, on the emblem of the team's jersey, all three cherry blossoms were in full bloom.

According to the Japan Rugby Football Union, there are various accounts as to why the design has evolved. Some believe Kayama instructed that all three flowers be in full bloom, while some others say the shirt maker did it by mistake.

The union said it has no record of how the sakura emblem came into being and therefore does not have any decisive answers to the mystery.

"Rugby Grandma" Ishi Fukui, born in Kyoto in 1892, opened the Iwataya sports goods shop in Kyoto's Shijodori Karasuma in 1922, according to her grandson Kenichi Takada. The shop offered a variety of rugby goods imported from overseas, which was quite rare at the time.

"My grandmother started the shop all by herself," Takada said, recalling what he had heard from his mother -- Fukui's eldest daughter -- and other relatives. "She was good in drawing by nature and designed the uniforms of a number of university rugby teams."

Fukui also opened another shop in Tokyo's Kagurazaka in 1936.

"She was close friends with Meiji University coach Chuji Kitajima as well," Takada said. "I have also been told (about her involvment with) the Japan team emblem."

A Kyoto Shimbun evening newspaper article on Jan. 15, 1955, featured Fukui and her shop, which was filled with British-made rugby balls and frequented by many members of the Kyoto University rugby team.

As Fukui's shop began to feature more and more rugby products, she earned the nickname "Rugby Grandma." Being close acquaintances with many rugby figures such as fellow Kyoto-native Takenosuke Okumura, who served as the union's managing director, Fukui went to watch rugby matches in person across Japan.

She was among those on the spectators' stand at the 1952 match against Oxford as well, when the triple full-bloom cherry blossom emblem donned the team jerseys, and was said to have shed tears of joy during her reunion with Okumura.

"I am grateful that the sakura emblem, with 90 years of history, is still be used and treasured even now," grandson Takada said. "I believe my grandmother too is elated with Japan's hosting of the World Cup for the first time."