Nearly seven years in office, Prime Minister Shinzo Abe is betting that his handpicked ministers and ruling party lawmakers will give him a firmer -- and possibly longer -- grip on power.

With relatively high support ratings and a track record of election wins, the 64-year-old Abe hopes to keep the wind blowing in his favor as he is set to deliver on his promise to go ahead with an unpopular consumption tax hike next month.

Abe brought in new faces in his Cabinet reshuffle on Wednesday, with the surprise installment of rising political star Shinjiro Koizumi viewed as the prime minister's attempts to get a fresh popularity boost and foster a pool of future talent in the ruling party to succeed him.

But he largely counted on his longtime supporters and trusted allies to ensure a smooth ride, leaving the job of maintaining intraparty unity to heavyweights in Abe's ruling Liberal Democratic Party who are loyal to the premier.

"The new lineup is meant to lay the groundwork for Mr. Abe to press forward with his goal of amending the Constitution and possibly to seek yet another term (beyond September 2021)," said Masahiro Iwasaki, a political science professor at Nihon University.

Signifying the continuation of the status quo, Abe kept Chief Cabinet Secretary Yoshihide Suga and Deputy Prime Minister Taro Aso, who doubles as finance minister, both of whom have formed the backbone of the Abe administration since 2012. 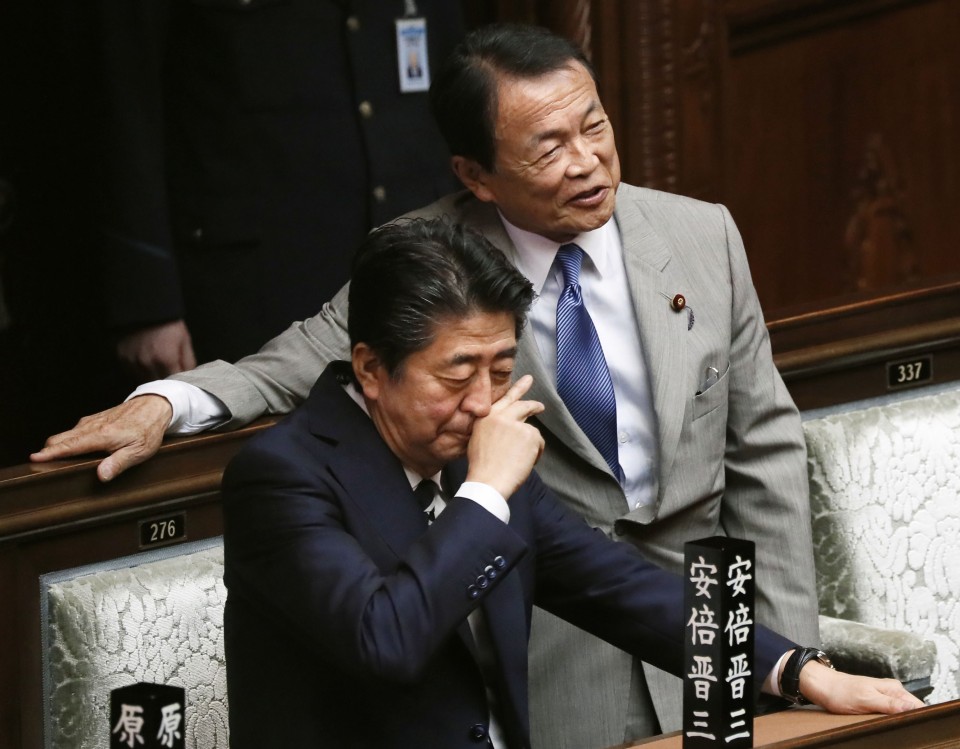 As Abe said he would form a team that can "shine a light" on various faces in the LDP, the subsequent appointment of would-be successors in Cabinet posts is also a strategic move to secure their loyalty and solidify his power base, political observers say.

Besides Koizumi, the list of hopefuls includes Defense Minister Taro Kono, a U.S.-educated political maverick, and Foreign Minister Toshimitsu Motegi, who has earned his reputation as a tough and skilled negotiator in bilateral trade talks with the United States. Health minister Katsunobu Kato is Abe's close aide who used to serve as a deputy chief Cabinet secretary.

Abe's right-hand man Suga is also rumored to be a contender since he announced the name of Japan's new imperial era and became known as "Uncle Reiwa."

"Mr. Abe apparently thought Mr. Kono was becoming a standout as foreign minister. So moving him to (the post of) defense and having Mr. Motegi take over can signal that they are both potential successors," Hitoshi Komiya, an associate professor at Aoyama Gakuin University.

"The succession battle will continue. But I doubt that Abe is serious about fostering successors to an extent that his position will be challenged, at least for now," said Komiya, an expert in contemporary Japanese history who is well-versed in the LDP.

Following his return to power in 2012, Abe is set to become the longest-serving prime minister in November and still has two more years left in his current term. Any extension will require a rule change in the LDP.

Abe's harboring of ambitions to stay in power may be evident in his choice of heavyweight Toshihiro Nikai over Fumio Kishida, a potential Abe successor, to take the No. 2 post of secretary general.

Political analysts expect Abe to accelerate work toward amending the pacifist Constitution before his term ends, saying that Nikai will be the better fit in terms of coordination skills.

But Abe, along with the LDP, faces a higher hurdle without support from the opposition camp, now that pro-amendment forces are short of the two-thirds majority in the upper house needed to initiate any revision process. 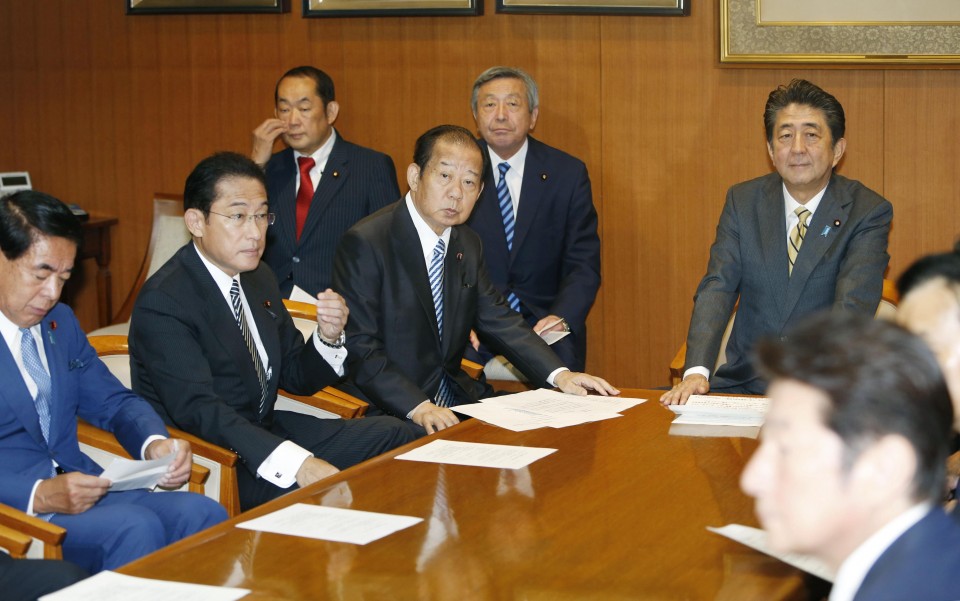 Mindful of that reality, former Foreign Minister Kishida -- a moderate liberal who distinguishes himself from Abe -- made a rare overture ahead of the reshuffle, though it apparently failed.

In a face-to-face meeting in late August with Abe, Kishida expressed his wish to become the next secretary general of the LDP and said he would lead LDP efforts toward constitutional reform, according to people with knowledge of the meeting.

Kishida was not allowed to climb the ladder this time, but he revealed part of his thinking at a press conference on Wednesday, also attended by Nikai.

"As I begin my third-term as policy chief, I'd like to make it much clearer...how I see my future and the future of Japan from now," Kishida said.

The retaining of Kishida as policy chief was a calibrated move on the part of Abe.

"He may still lack luster (to be an Abe successor) but moving him out of the key LDP executive posts would have turned him against Abe," said Iwasaki. "That is something that the prime minister wants to avoid."

Abe's distribution of posts was largely balanced among the LDP's established factions, a sign of Abe's focus on intraparty unity, according to political observers. Still, he gave the cold shoulder to one led by his rival Shigeru Ishiba, who has challenged Abe in recent LDP leadership races.

Nikai, already the longest-serving LDP secretary general, promised again to stand by Abe, also president of the party, in the years ahead.

"Should the president decide (to seek another term), I'd like to say...he can get support from the whole of the party," he said.