1 dead, 33 injured as train derails after hitting truck in Yokohama

YOKOHAMA - A truck driver died and 33 people were injured after an express train collided with a truck and derailed Thursday in Yokohama near Tokyo, police and a railway operator said.

The train, which usually travels at 120 kilometers per hour in the area, crashed into the 13-ton truck at a crossing on the Keikyu Line around 11:40 a.m., causing the first three carriages of the eight-car passenger train to derail. The truck caught fire.

Although the train driver applied the emergency brake before the crash, the truck was dragged 60 to 70 meters upon impact, according to the police and train operator Keikyu Corp. 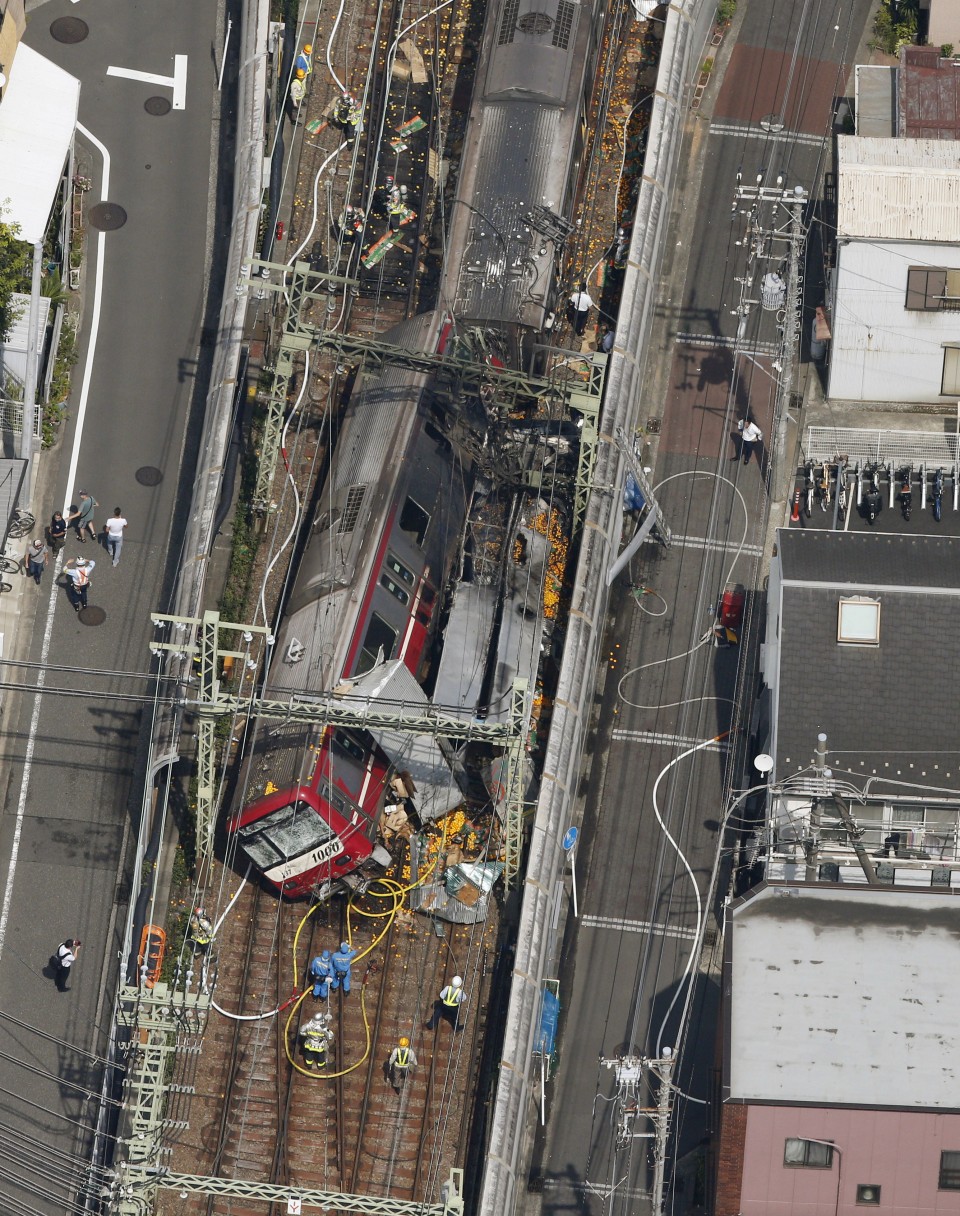 Michio Motohashi, the 67-year-old truck driver, died in the accident, while the train driver, the conductor and 31 passengers aboard the train from Aoto in Tokyo to Misakiguchi in Kanagawa Prefecture sustained light injuries, according to the police.

The truck, 12 meters long and 2.5 meters wide, is suspected to have got stranded on the crossing while trying to turn right from a narrow side road along the tracks, the police said.

A transport firm in Katori, Chiba Prefecture, said it believes the truck was from its fleet and the driver was carrying fruit from Yokohama to Narita, east of Tokyo.

"I thought I would die," said a 23-year-old man who managed to escape through a window of the train's first carriage. He said he heard another man yell "watch out" before the impact.

A plume of black smoke could be seen rising into the air after the accident and the first car of the train was lifted off the tracks.

Yellow fruit was scattered along the tracks and elsewhere, while metal poles alongside the tracks were bent.

"I heard what sounded like an explosion, the ground rumbled, and the windows of my house shook," said 59-year-old Mika Fujita, who lives in the area.

Fujita saw a man who said he managed to escape from the first train car. "I can't stop shaking from the massive impact," the man was quoted as saying.

The government set up a liaison office at the prime minister's office to oversee the response to the accident, while the Japan Transport Safety Board dispatched railway accident investigators to the site.

Keikyu said it would attempt to resume train service by the Friday evening rush period in areas affected by the accident. 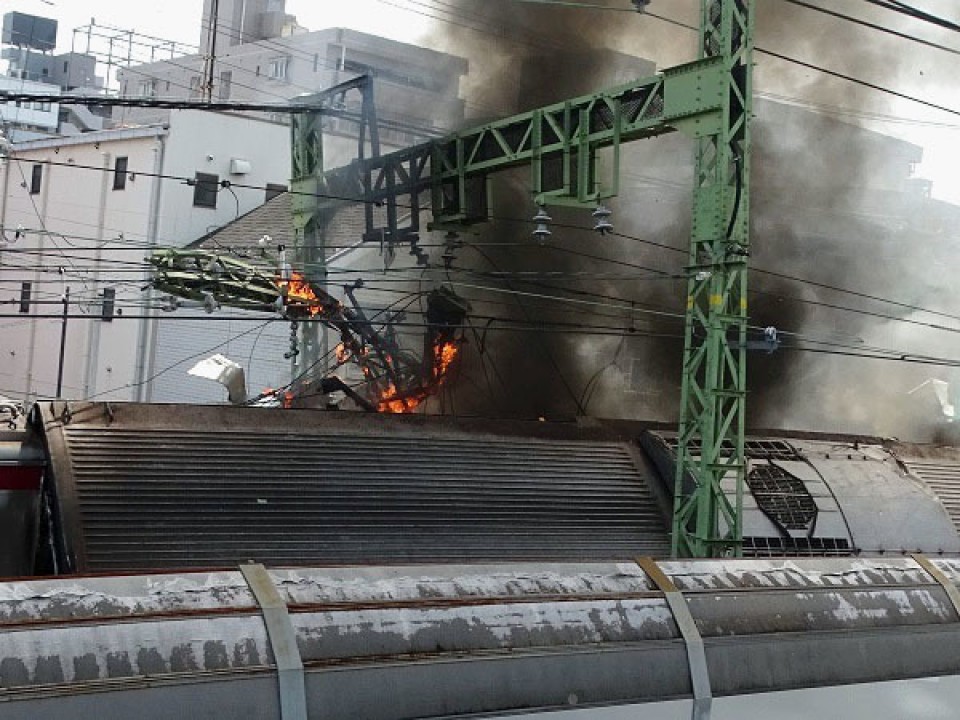 [Supplied by a local resident]

The Keikyu Line runs through Tokyo and neighboring Kanagawa Prefecture, and part of its service takes passengers to and from Haneda airport.

Originally founded in 1898, the private railway company was established as Keikyu Corp. in 1948. The firm also operates bus companies and hotels.

In September 2012, a Keikyu express train ran into a mudslide in Yokosuka and derailed, leaving more than 50 people injured. Another train operated by the company was also involved in a mudslide-related derailment in April 1997, injuring 19. 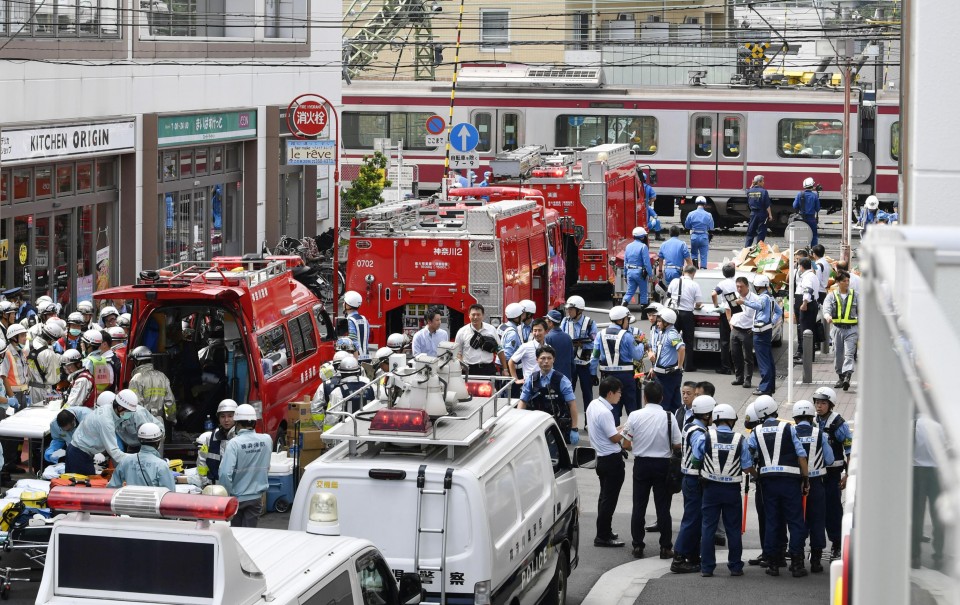 The following is a chronology of major rail accidents in Japan over the last two decades.

March 8, 2000 -- The last car of a train on the Hibiya Line of the Teito Rapid Transit Authority, the predecessor of Tokyo Metro Co., derails and slams into an oncoming train near Nakameguro Station, killing 5 and injuring 64.

Dec. 17 -- Trains on the main Echizen Line of Keifuku Electric Railroad Co. collide head-on in Matsuoka, now part of Eiheiji, in Fukui Prefecture, killing one of the drivers and injuring 27 people.

April 25, 2005 -- A rapid service train on West Japan Railway Co.'s Fukuchiyama Line derails in Amagasaki, Hyogo Prefecture, after entering a bend when traveling well above its maximum permitted speed. It left the tracks and crashed into a condominium building, killing 107 people and injuring 562.

March 1, 2007 -- A train on Hokkaido Railway Co.'s Sekihoku Line collides with a trailer truck on a railroad crossing in Bihoro and derails, injuring 51 people.