The approval rating for Prime Minister Shinzo Abe's Cabinet stands at 55.4 percent, up 5.1 percentage points from the previous poll in August, after he reshuffled his government lineup and the leadership team of the Liberal Democratic Party, a Kyodo News survey showed Thursday.

In the nationwide telephone poll conducted Wednesday and Thursday, 47.1 percent opposed amending the pacifist Constitution under the government of Abe, who reiterated his determination to do so following the leadership shake-up on Wednesday. It showed 38.8 percent supported his drive to revise the supreme law.

Abe moved or replaced 17 of his 19 ministers to ensure political stability and address mounting challenges such as social security reform. The government plans to raise the consumption tax from 8 percent to 10 percent in October to secure funding for expanding child care support.

It found 81.1 percent were either "worried" or "worried to a certain extent" about a possible negative economic impact from the tax hike, while 17.2 percent were not.

In the lineup change, the appointment as environment minister of 38-year-old political hopeful Shinjiro Koizumi, the youngest man to assume a Cabinet post in postwar Japan, grabbed the spotlight. His recent marriage to TV personality Christel Takigawa had received extensive media coverage. 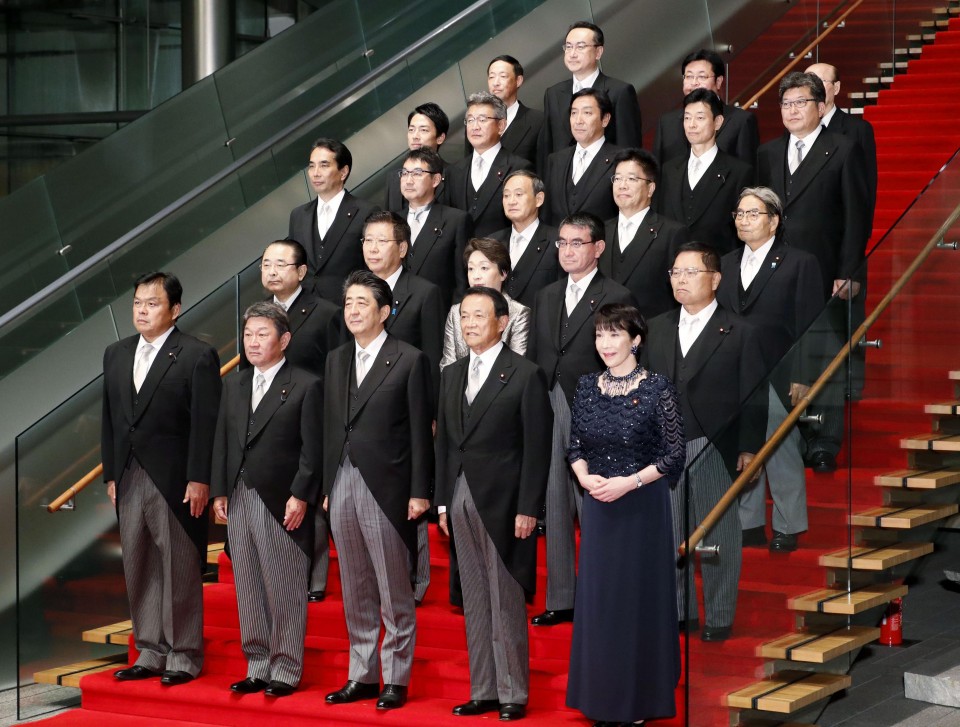 Overall, 50.9 percent of the respondents viewed Wednesday's reshuffle positively, while 31.4 percent did not.

Asked about priority issues for the Cabinet, 47.0 percent picked pensions, and medical and nursing care, 35.0 percent chose the economy, while 25.7 percent said the Cabinet should address issues related to child-rearing and the country's declining birthrate.

Despite Abe's push, only 5.9 percent saw amending the war-renouncing Constitution as a priority, according to the survey.

Abe has until his current term as LDP president expires in September 2021 to achieve his long-held goal of constitutional reform.

But he faces high hurdles with the public divided over the issue and pro-amendment forces short of the two-thirds majorities required in both chambers of the Diet to initiate the revision process.