Yahoo's online sales are expected to surpass 2.6 trillion yen after bringing Zozo under its umbrella. Zozotown is one of Japan's largest fashion e-commerce sites offering more than 730,000 items to the more than 8 million visitors to its site.

Yusaku Maezawa, a billionaire entrepreneur who founded the operator of the Zozotown clothing store, stepped down as CEO the same day and was replaced by Kotaro Sawada.

Wearing a white T-shirt with the phrase "Let's start today" on it, Maezasa said at a press conference in Tokyo that he left his company as he wants to dedicate more time to preparation and training for his planned trip to the Moon.

"I am glad to have made a big decision (to leave the company) following my 21-year presidency," he said.

In September last year, Maezawa said he is set to become in 2023 the first person to travel to the Moon since the Apollo program ended in 1972.

Maezawa said he is booked to orbit the Moon in the Big Falcon Rocket spaceship being developed by Space X, the space transportation firm of U.S. tech billionaire Elon Musk. Maezawa said he plans to take six to eight world-renowned artists with him on the journey.

He also told reporters that he plans to join another space tour before the Moon trip.

The founder of the online fashion store also said he aims to set up a startup in the future from scratch.

"I want to keep being an entrepreneur and to undertake some business which helps people in trouble and contributes to society," he said.

According to Yahoo, Maezawa told the internet company in late June that he would be willing to sell his equities in Zozo if it would help enhance the online retailer's corporate value. At the time, Yahoo was seeking to cooperate with Zozo on an online shopping website it plans to launch.

Yahoo sees online sales as a pillar of its growth strategy, and the takeover will allow it to nip at the heels of U.S. giant Amazon.com Inc. and Japan's Rakuten Inc. in the domestic market.

"Our sales will be boosted due to synergy between the two companies. We will be the best partners respecting each other's ideal," said Yahoo Japan President Kentaro Kawabe, adding that the IT firm is aiming to be the biggest Japanese e-commerce company in the first half of the 2020s.

SoftBank Group Corp. Chairman and CEO Masayoshi Son, who appeared at the press conference, said he had introduced Maezawa to Kawabe. Yahoo is under the wing of SoftBank. 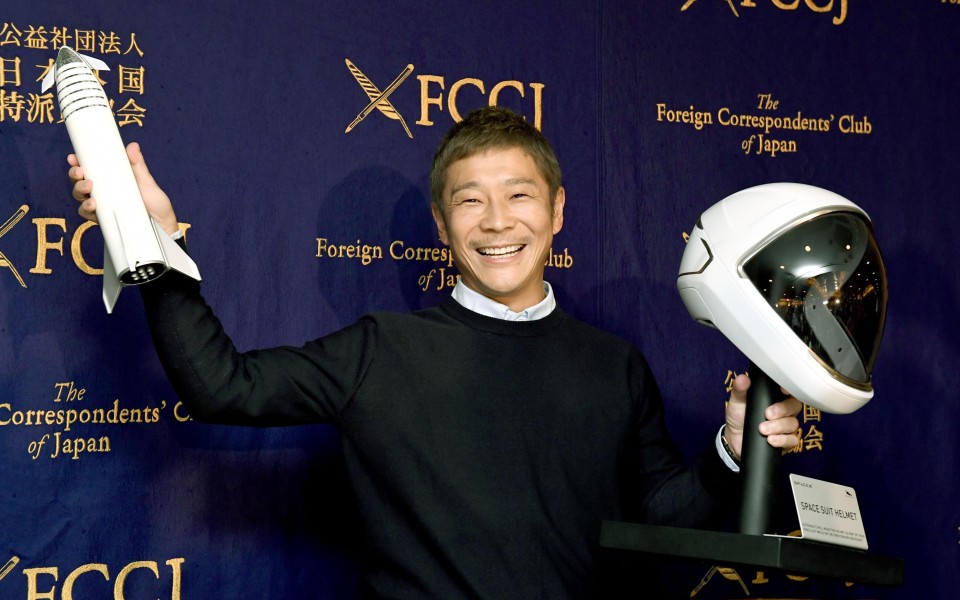 Yahoo will start its takeover bid at 2,620 yen per share, possibly in early October, while setting a 50.1 percent cap on the purchase of shares in Zozo.

Maezawa has agreed to sell a 30 percent stake in the company for more than 240 billion yen, leaving him with a 7 percent holding.

Zozo will accept two directors at its board from Yahoo and remain listed on the Tokyo Stock Exchange after the planned takeover.

The announcement pushed up the share price of the online apparel retailer 13.4 percent, finishing Thursday's trading at 2,457 yen on the Tokyo Stock Exchange.

Maezawa, 43, who founded Start Today, the predecessor of Zozo, in 1998, has been seen as an unconventional entrepreneur. He has often made headlines for things outside of his business activities.

Maezawa founded the Contemporary Art Foundation in Tokyo in 2012, and his collection includes two works by U.S. artist Jean-Michel Basquiat that he bought in 2016 and 2017 for a total of $170 million.

In January this year, Maezawa generated the most retweeted tweet of all time by posting that he would give 1 million yen to 100 people each in what he called New Year's gift money, a move criticized by some people as buying followers.

Maezawa changed the company name to Zozo last October. It posted a group net profit of 15.99 billion yen on sales of 118.4 billion yen in fiscal 2018 that ended March.