Russia is planning to deploy additional missile systems on two islands in the northern portion of the Kuril Islands chain off Japan's Hokkaido in a bid to strengthen its defense capabilities in the region, an internal Russian government document showed Monday.

The document, obtained by Kyodo News, revealed that new land-to-ship missile systems called the Bastion, with a range of more than 300 kilometers, would be deployed on Paramushir and Matua in the chain, which includes four Japan-claimed islands.

The plan indicates Russia places strategic importance on the Kuril Islands in defending the Sea of Okhotsk and its nuclear force stronghold against the United States.

It also means a defense line stretching from the Kamchatka Peninsula to Hokkaido, which falls within the range of the missile defense systems, will be completed soon.

The development is likely to hinder progress on talks on a postwar peace treaty between Prime Minister Shinzo Abe and Russian President Vladimir Putin, who are scheduled to meet Thursday in Vladivostok in Russia's Far East on the sidelines of an economic forum. 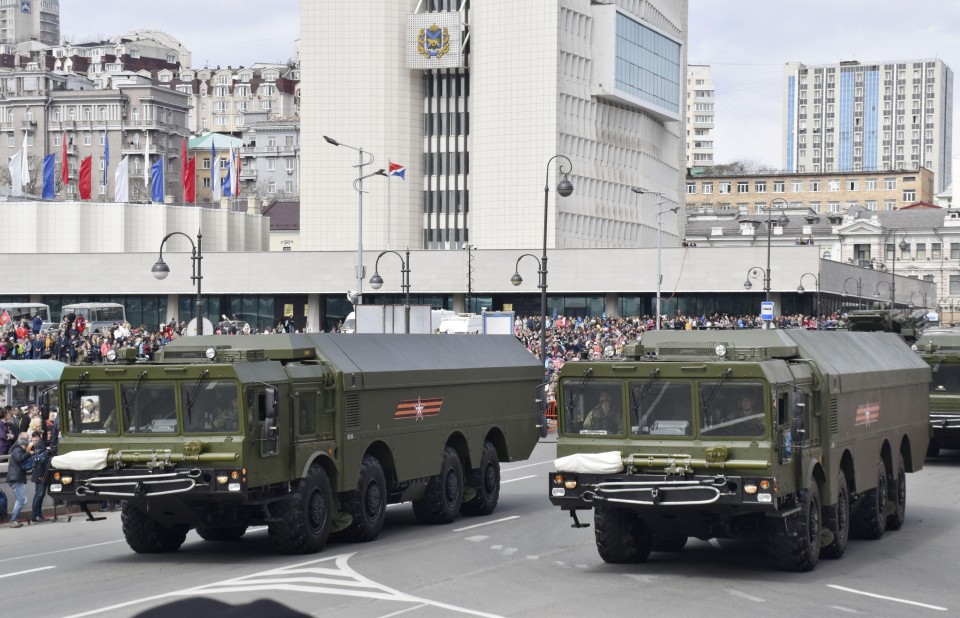 (Photo taken at a military parade in Vladivostok, on May 9, 2018 shows vehicles equipped with shore-to-ship missile system Bastion.)

With the United States seeking to deploy intermediate-range missiles in the Asia-Pacific region following the demise of the Intermediate-Range Nuclear Forces Treaty with Russia last month, tensions continue to heighten.

The document dated December showed that the missile defense systems would be moved from the Kamchatka Peninsula to Paramushir and Matua islands this year based on a presidential order.

It said a vessel-detection radio base and an air fleet would also be installed on Matua.

Regarding the deployment of the missiles systems on the two islands, a Russian government official said, "They have already been moved, and are now being prepared for operation."

Tokyo has expressed opposition to a military buildup in the region surrounding the Russian-held, Japanese-claimed islands off Hokkaido, which are known as the Northern Territories in Japan and the Southern Kurils in Russia.

A separate document obtained by Kyodo News late last year, thought to have been drawn up sometime after the summer, showed Russia's plans to set up a "unified defense system" along the islands chain with the deployment of additional missiles to Paramushir and Matua in 2020.

Missile systems were deployed in 2016 on Etorofu and Kunashiri, two of the four disputed islands. Along with Shikotan and the Habomai islet group, they were seized by the former Soviet Union following Japan's surrender in World War II in 1945.

"Despite Russia strongly criticizing the United States for building a missile defense network, they themselves are steadily strengthening their own defense systems," a Japanese government official said.

Abe and Putin agreed in November to step up talks based on a 1956 agreement that mentioned the handover by the then-Soviet Union of Shikotan and Habomai to Japan once a peace treaty was signed.

Putin, however, has expressed concerns over the possibility of U.S. military expansion and Tokyo's plan to deploy a U.S.-developed missile defense system, saying it would be difficult to conclude a peace treaty unless Japan explains its future security policy.