A Tokyo metropolitan government ordinance took effect Sunday that is expected to boost the number of hotel rooms in the capital accessible by the disabled and the elderly ahead of the 2020 Olympic and Paralympic games.

Tokyo's revised barrier-free building ordinance is the first in Japan to set criteria for standard hotel rooms so persons with disabilities and senior citizens can more conveniently access them. 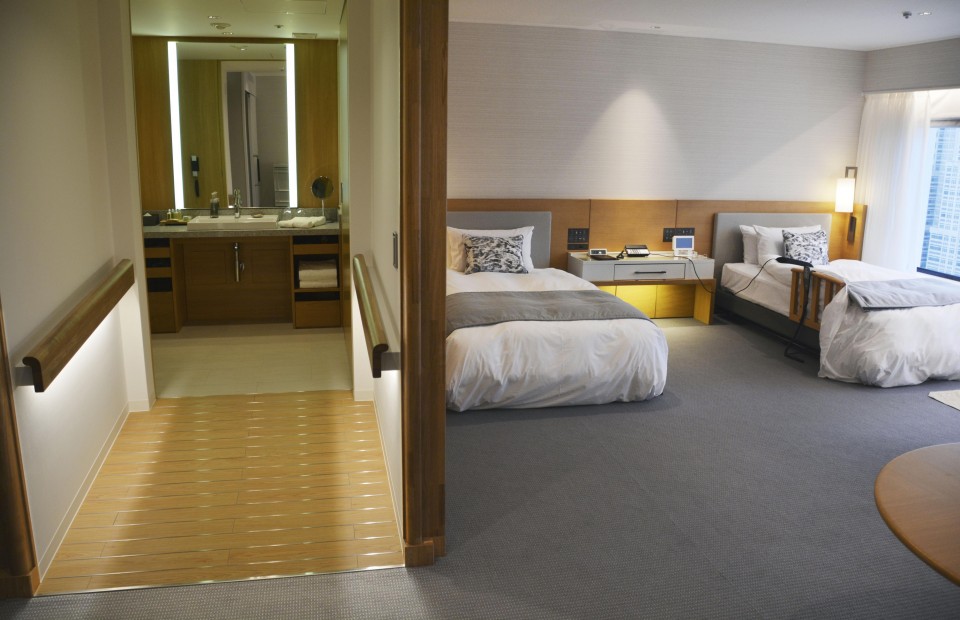 It stipulates that standard rooms in hotels and lodgings with renovated, newly or additionally constructed floor space of over 1,000 square meters must provide doorways at least 80 centimeters wide and bathroom entrances that are a minimum 70 cm wide.

There should be no steps in the rooms or on the way to them, according to the ordinance.

"We would like to use the games as a jump-start to improve facilities, leaving a legacy toward the future of an aging society," said a Tokyo government official in charge.

The metropolitan government estimates up to 850 barrier-free hotel rooms will be needed per day during the upcoming Tokyo Games.

As the existing number of wheelchair-accessible rooms is insufficient to meet demand, the new ordinance is expected to push hotel operators to further renovate standard rooms to make them barrier-free.

By subsidizing 80 percent of the costs necessary to make existing rooms barrier free, the Tokyo government expects to secure 2,500 rooms per day accessible by the disabled and the elderly during the games, including newly constructed rooms.

It notes, however, that the newly available rooms will not be for the exclusive use of the disabled, the elderly and others who need them, hence the necessity to build as many barrier-free rooms as possible.

"It was difficult in the past to find out in advance which hotel rooms were wheelchair accessible," said Toshihiko Noguchi, a senior official of the Tokyo Council on Independent Living Centers.

Noguchi, an electric wheelchair user and a muscular dystrophy patient, welcomed the new ordinance. "It will become a lot easier to choose if all the newly available rooms are made barrier-free," he said.

JR East Hotel Mets Akihabara, which is set to open in October in Tokyo's Chiyoda Ward, will offer a total of 195 standard rooms, all of which will meet the criteria set by the ordinance.

Although the hotel was not required to follow the new rules because it was built before they came into force, an official of its operator Nippon Hotel Co. said, "We came up with a hotel that would be convenient for elderly and disabled customers to use, given the reality of an aging population."

Keio Plaza Hotel Tokyo, located in the capital's Shinjuku district, prepared 13 barrier-free "universal rooms" in December through renovating existing rooms or building new ones. Their doorways are 85 to 90 cm wide and ramps allow access to the bathroom facilities.

The rooms are also equipped with tablet computers connected to the front desk to enable disabled guests to communicate via written messages.

"We are aiming to create rooms that cater to a variety of customer needs," said Chikara Oda, who is in charge of the hotel's sales strategy, "while embracing the elements of what makes us a hotel."