Australia overcame a nervous start to emerge 39-21 winners Saturday against Fiji, who threw everything they had at the Rugby World Cup Pool D favorites.

Fiji raised hopes for the tournament's first big upset by taking a 14-12 lead into halftime at Sapporo Dome, with Australian fans growing even more anxious after the islanders opened the scoring following the break. 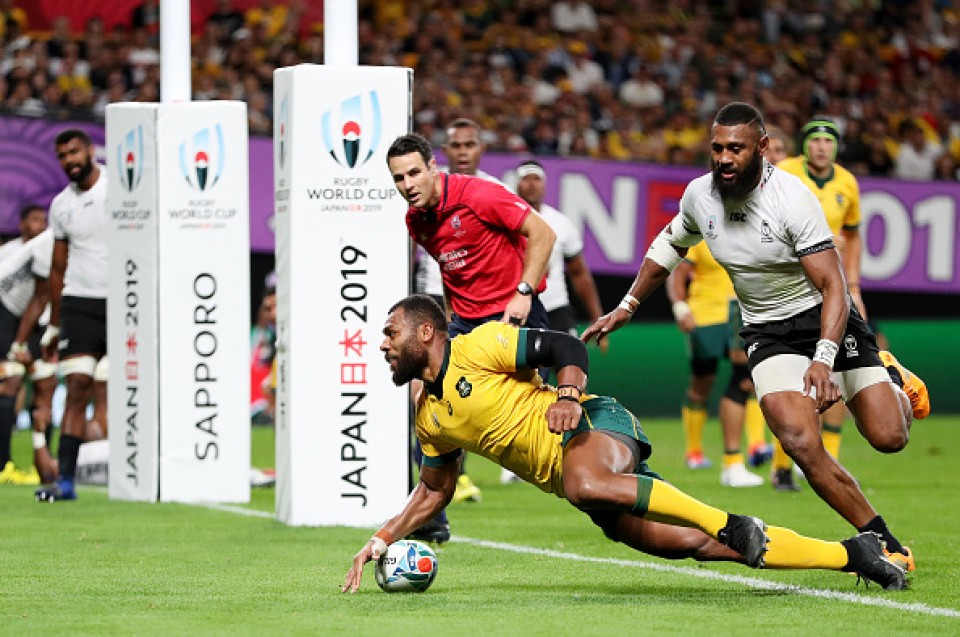 (Samu Kerevi of Australia grounds the ball to score his side's fifth try.)[Getty/Kyodo]

But the Wallabies forced their way back into the match with strong forward play off set pieces. They took their first lead at 25-21 when Silatolu Latu crossed for his second-straight try from a maul in the 61st minute, shortly after Fiji went down a man with the sin-binning of Levani Botia.

Fiji coach John McKee lauded his team for their performance, saying they aimed to advance to the quarterfinals despite the loss. To reach the knockout stage for the first time, Fiji will most likely need to win the rest of their pool games, including against world No. 5 Wales on Oct. 9.

"We're still right in this tournament. We're focusing on the next game and we'll be watching with interest to see how Australia and Wales go," the New Zealander said. 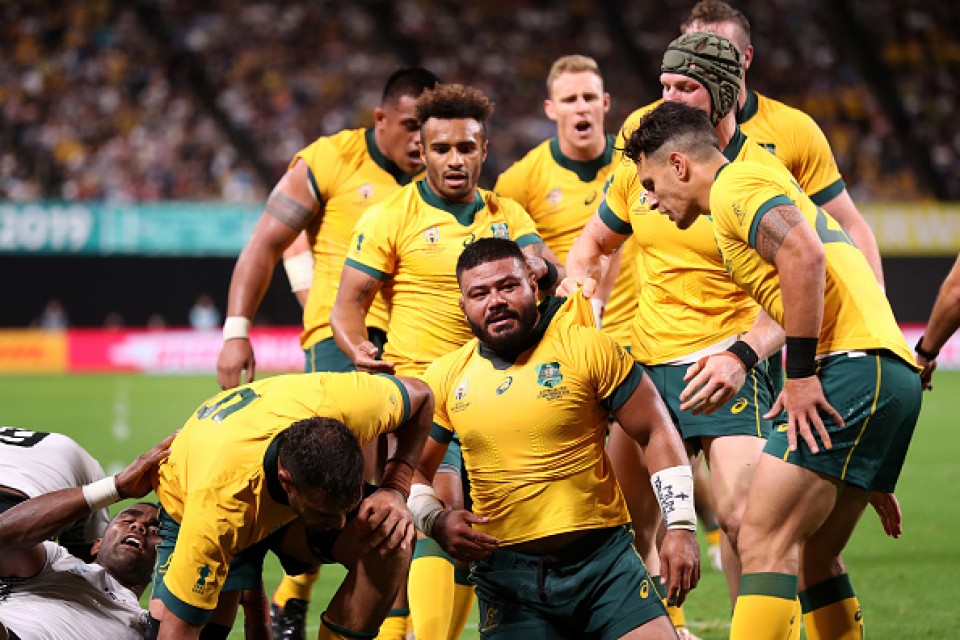 (Tolu Latu, center, of Australia is congratulated by his team mates after scoring his side third try.)[Getty/Kyodo]

The loss of flanker Peceli Yato with a concussion following a 25th-minute collision with Australian winger Reece Hodge was a crucial turning point, according to McKee.

Until his substitution, Yato had been one of the best players on the ground. His loss was further compounded by a game-ending injury to No. 8 Viliame Mata.

"Losing two back rowers was really critical, when you have to swap a lock into the back row, that probably had a big effect on our game in the second half," McKee said.

Playing to their strengths early, Fiji showed no reservations running from deep inside their own territory, with powerful ball carriers including Yato making inroads through the Australian line. 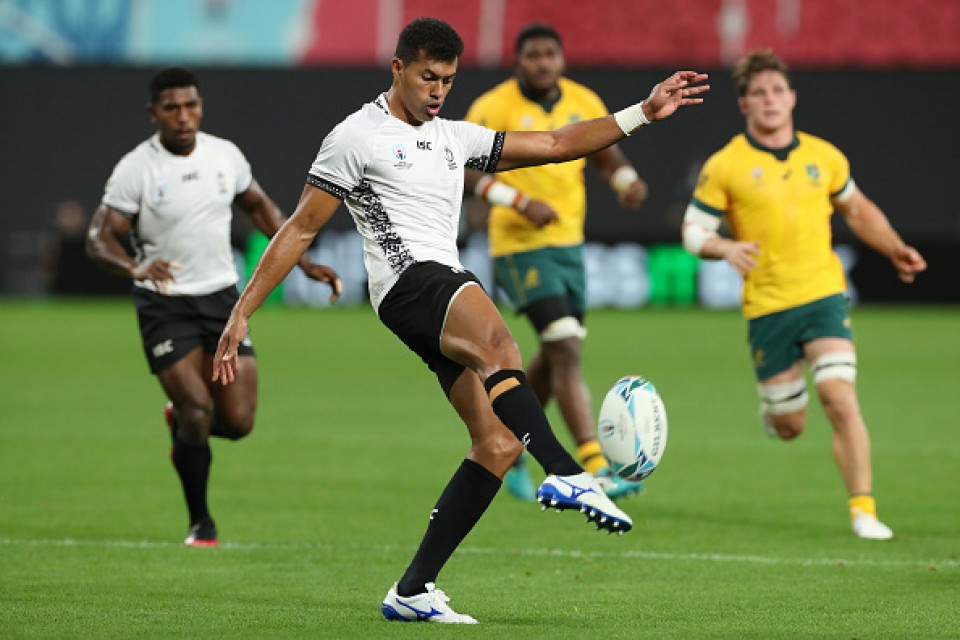 Fiji opened the scoring in the fourth minute when Ben Volavola slotted a three-pointer after Australia were penalized near their own try line.

The Pacific islanders crossed for the game's first try three minutes later, with Yato scoring in the corner after the Fiji backs quickly spread the ball wide on a counterattack.

With Fiji holding firm against a succession of attacks down the left side, Australia finally crossed in the 17th minute after captain Michael Hooper bulldozed through the defense to score near the posts.

After Fiji extended their lead with a pair of penalty kicks, the Wallabies cut the margin to 14-12 following a try in the corner to Reece Hodge in the 35th minute.

The Flying Fijians drew first blood after the break, with winger Waisea Nayacalevu snaring a loose pass from the Australian backline and running in a try from near halfway.

But nearly identical tries in the right corner from man-of-match Latu in the 56th and 61st minutes saw the Wallabies overhaul the Fijian lead.

Australian coach Michael Cheika said the introduction of veteran No. 9 Will Genia for Nic White in the second half had provided his team with a steadying influence.

"You have such experienced players, Will Genia has played 100 tests, so in a situation like that, it was a good opportunity for him to come and bring his experience into the game," Cheika said.

"He made a very nice kick when he first came onto the field, and he had good communication around his players. We have two halfbacks here only, so we want to make sure they're sharing the work."