Growers promote exports of "Queen of Bonsai" to Europe

Bonsai growers in western Japan are trying to boost exports of a tree known as "queen of bonsai" for the elegance of its leaves and trunk mainly to Europe, to establish a global brand and revitalize the regional economy.

In August, 12 suppliers in Shikokuchuo launched a group to promote overseas shipments of the "Akaishi Goyomatsu" tree, which is native to the 1,706-meter Mt. Higashiakaishi in Ehime Prefecture and suitable for the art of growing miniature ornamental potted trees.

The group led by local grower and seller Junichi Moritaka, 60, who personally began bonsai exports to France in 2017, aims to start collective overseas shipments of the tree around January next year and achieve annual sales of some 1,000 pots worth more than 30 million yen ($278,000) by 2022.

Moritaka's company Akaishi no Izumi will directly purchase the queen of bonsai trees from the member suppliers and ship them altogether in containers.

For the past decade, he has set his eyes on wealthy European bonsai fans and prepared for exports of the local tree by taking measures to pass quarantines and exchanging information with buyers. 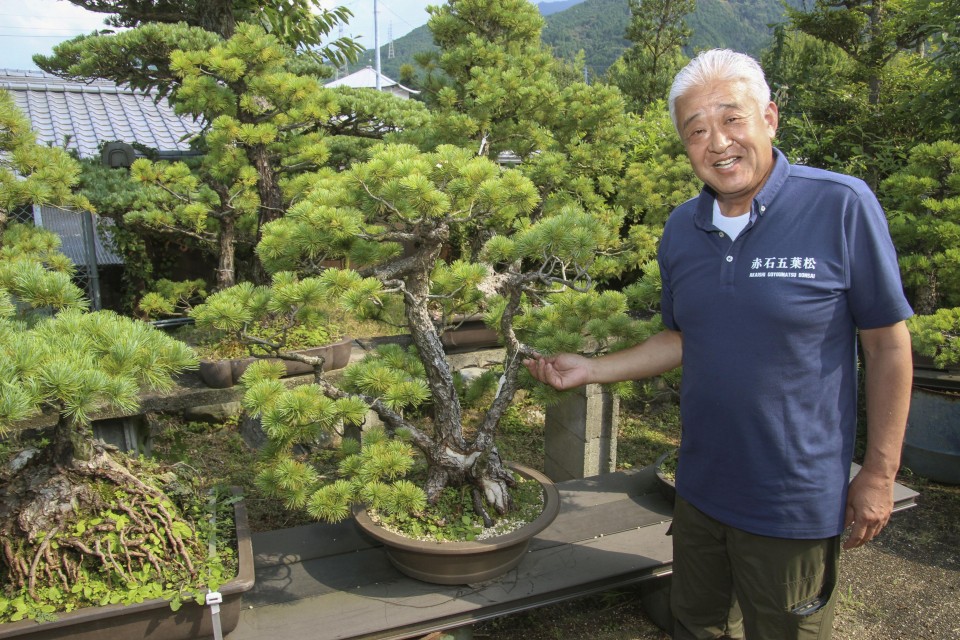 In 2017, Moritaka managed to sell around 200 pots to France for about 3 million yen in total.

Japan's overall bonsai and garden tree exports have steadily risen in recent years and stood at about 8 billion yen in 2016, according to government data.

Its popularity overseas was well represented in the World Bonsai Convention held in Saitama Prefecture in 2017 with participants from 40 countries and regions. The event featured demonstrations of bonsai artists and drew some 45,000 visitors.

Moritaka recalls many foreign bonsai buyers visited his hometown when he was an elementary school student. Fifty years on, the former bustling community was lost with the dwindling number of suppliers due mainly to aging.

With a sense of crisis, Moritaka has spearheaded bonsai export promotion efforts, being aware that the local community should not just wait for buyers.

"Europe has a good eye for bonsai and evaluates quality of the trees honestly," he said. "I want to revive the region by making the Akaishi Goyomatsu a global brand."